In the first arc of writer Samuel Sattin and artist Chris Koehler’s Legend, out in trade paperback now from Z2 Comics, when the apocalypse descends upon the Earth, animals are left holding the reins of what’s left, the stewards of a fallen world. Described by Sattin as “Watership Down…remixed with The Walking Dead,” Legend looks at life after a biological catastrophe has decimated most of humanity, with the remaining dogs and cats and animal life left behind attempting to pick up where humanity left off.

Mr. Sattin spoke to me recently about the first Legend story arc, how writing for comics has affected his craft, and what’s next for Legend and his further projects. 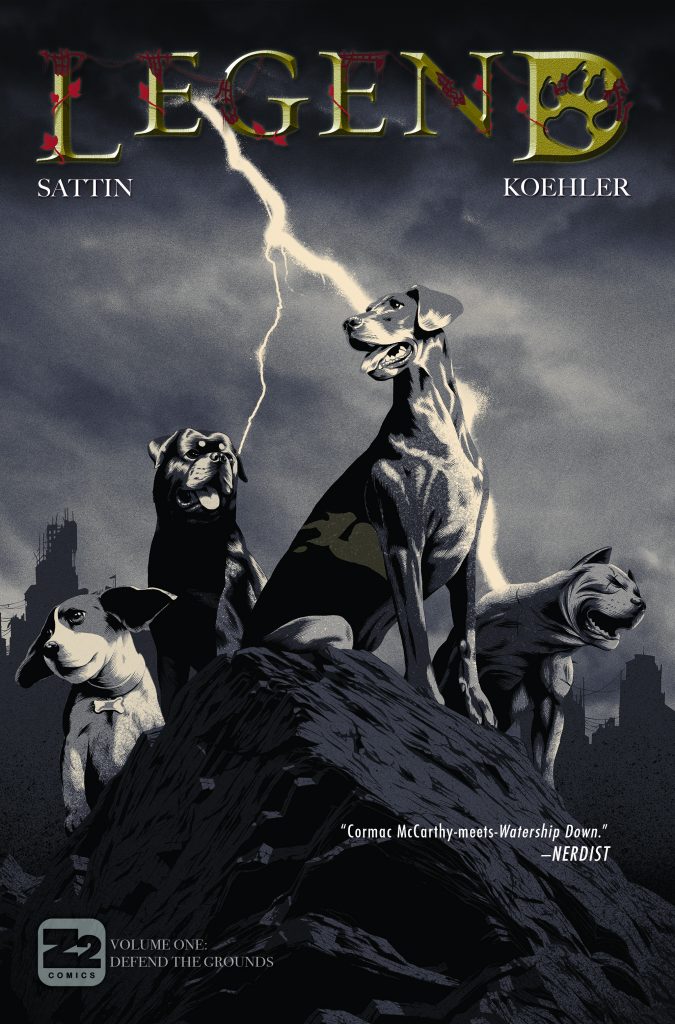 FreakSugar: For folks who are considering picking up volume one of Legend, how would you describe the first arc?

Samuel Sattin: Humanity has been ravaged by a bio-terror attack, and mankind is presumed to be at its end. But in a small, secluded part of a devastated city, a group of animals continues to endure. Ransom, the leader of the dog tribe, has been killed by a mysterious creature called the Endark. Legend, an English Pointer with a reputation for being trustworthy, accepts the mantle of leader in his place, and declares that he will kill the beast terrorizing their homeland. In order to do so, however, he and his friends, Daisy, Herman, and Elsa, must forge an alliance with their enemies, the Cat Tribe, which is known for possessing strange technology. Old foes must become fast friends with the imposition of bigger threats, and from then on, things get dangerous. The queen of the cats dispatches two of her finest armored guards to accompany the dogs across a bridge to a mysterious hawk that knows the location of the beast they seek. The only question is, will they reach him before the true horrors of the wild come upon them?

FS: One thing that has impressed me so much about Legend is that while you anthropomorphize the characters to an extent, you manage to allow the cats to be cats, dogs to be dogs, and so on. Was that an important narrative point for you early on in crafting the project?

SS: Thank you. Making sure our animals are, in fact, animals, was (and is) definitely an important factor in the structuring of Legend. One of the things I find so interesting about classic animal tales, from Watership Down to Animal Farm and even The Jungle Book, is the way in which the authors seem to have understood that animals are, in fact, interesting. That they do, in fact, have personalities, and emotions, and some sort of viewpoint. The animals in Legend are lent a great deal of complexity and articulation, in part because that’s how animals truly operate, and in part because of reasons I can’t reveal at the moment, for fear of spoilers. But they are still animals. They still think like animals and they still act like animals, to the best of my writing ability. Chris’s art definitely helps solidify this notion as well. Graphic and moody, Chris’ style makes sure that our characters and world, while fantastical, remain grounded. He looks closely at the ways in which animals express themselves, as opposed to lending them human features. It’s something we’re both conscious of, and I appreciate that it’s noticed! 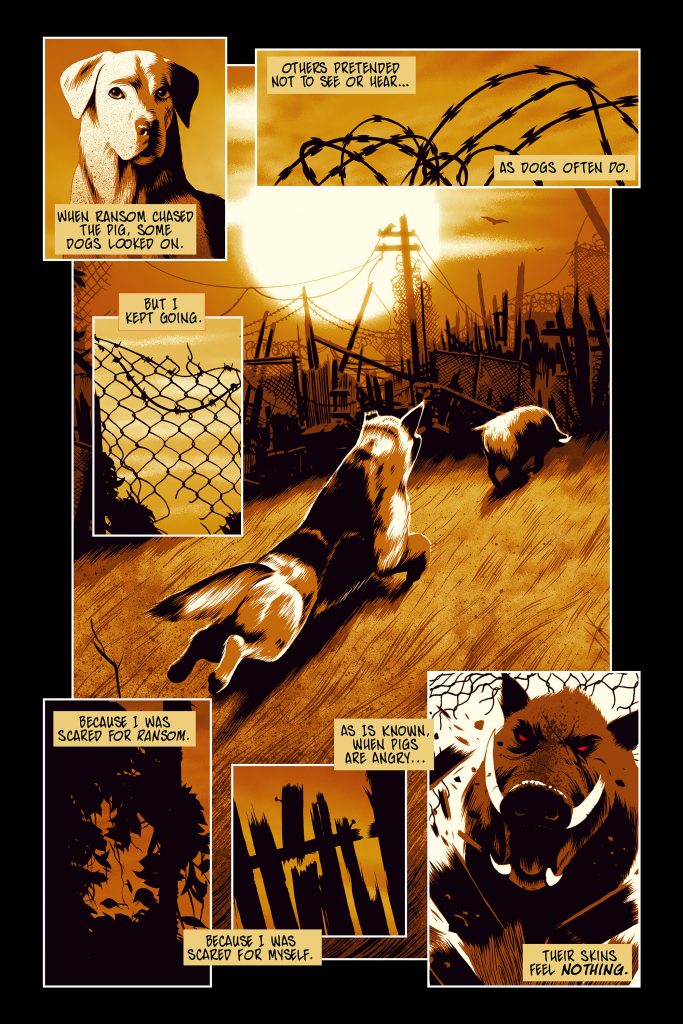 FS: You’ve described Legend as “Watership Down mixed with The Walking Dead” and I think that’s true in its treatment of the apocalypse and using animals as protagonists. However, there seems to be parallels with Legend and The Walking Dead in how both you Robert Kirkman use the apocalypse to not just tell a one-off tale, but to shoot for a long-form story. Is that fair? Is that something you had in mind?

SS: This particular Legend tale has a beginning, middle, and end in mind. But the world we’ve created has a lot of potential for expansion. I love long-form stories, and Kirkman’s is one of the very best, but I think with the world of Legend I’d like to see what happens if we were to explore multiple stories, in multiple places, and as they occur. Though I’ll never rule out continuing the saga of the dog tribe. Particularly in different mediums.

FS: While there have been many post-apocalyptic tales to discuss the condition of the world of today, Legend works so well because it provides a lens through which to tell such a story that hasn’t been used before. Why did you decide to use animals to tell this tale?

SS: It occurs to me now how much the notion of perspective plays into the reasoning. The post-apocalypse has been heavily explored with human characters. Such stories usually deal with us discovering how to recreate our society after the bulk of it has collapsed. But with animals, and especially with domesticated animals, the very notion of collapse is so much more interesting to me. I mean, here you have these creatures that have such a close relationship to mankind, that have become part of mankind’s family, and yet, remain inextricably separate from us. Then, the world they thought they knew, the world they’ve been bred into and programmed by, disintegrates. What then? Every ancient instinct becomes necessity, and the unknown becomes more dangerous than ever. So even more than just trying to use animals to vary up the post-apocalyptic equation, I feel like there’s something that can be said here, something that can be explored that hasn’t yet been touched upon that brings into question the very nature of what it means to be a community. 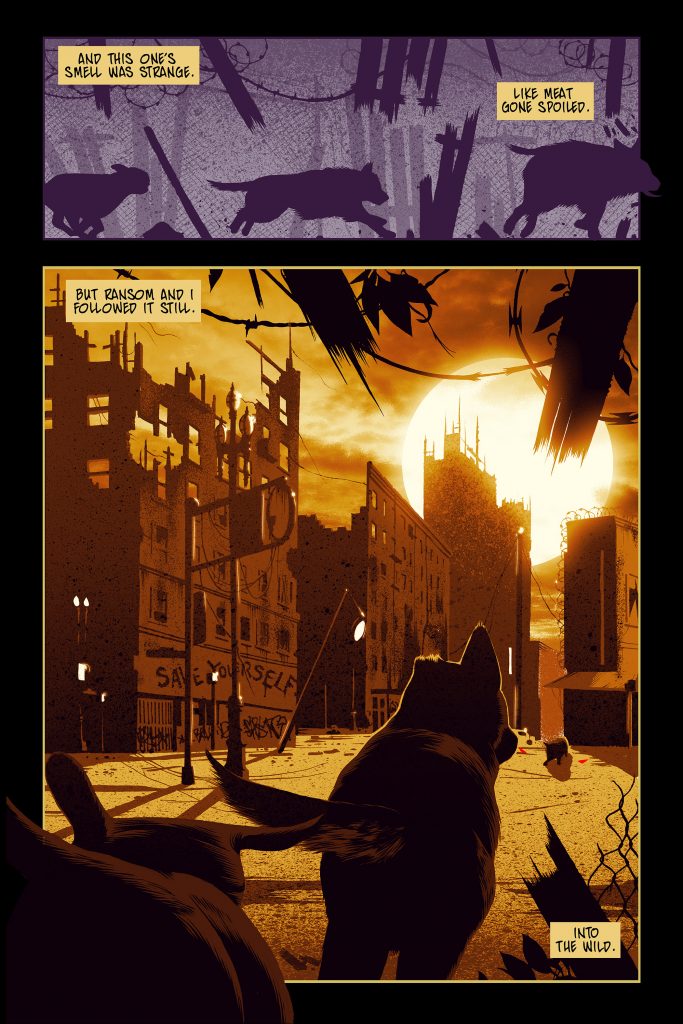 FS: This is your first foray into comics. As you wrote the first story, was there anything that surprised you, either in terms of writing for the comics medium or in terms of how the story played out?

SS: Absolutely. Novel writing is a patient person’s pursuit. Slow and steady wins the race. That’s not to say that it doesn’t take an immense amount of energy (it does), or that it’s not incredibly painstaking at times, but comics, especially monthly comics, I’ve come to realize, require you to be nimble and, at times, impatient. When you have deadlines, you have to make them; you’re not afforded the space or time to edit too much, and you have to plan well to avoid massive missteps. Even if you’re doing longer-form work you have to keep yourself on a very high-energy schedule. I feel like that’s why comics have taught me more about novel writing than any class in the medium I’ve ever taken. For someone like me, who has a tendency to overwrite, comics are a stern lesson in economy. I’ve had to learn to be lighter on my feet, and to sacrifice the languid pacing I’d developed previously. I can’t wait to see how my next novel comes out as a result. I think all novelists should try writing comics, even if just as an exercise.

FS: How has the experience of writing the first arc of Legend informed your other writing or how you are approaching the second arc?

SS: I’m definitely a more economical writer than I was when I started out, in all respects. I’m always paying attention to whether or not I’m trying to say more than I really need to. In terms of approaching the second arc, I feel like both Chris and myself understand the workload involved, which is a big part of what startled us off the bat. So we’ll probably start storing away food for the winter well in advance. I think in terms of story and art, we’ve both gotten used to the characters and world. Now, everything that once felt fuzzy has become very real, and dear. If anything, I think the second arc is going to pack an even bigger bang. I’m getting excited just thinking about it.

FS: I know you’ve said that books like Watership Down, Pride of Baghdad, and We3 have all been big influences on your work in Legend, and I can definitely see that. However, at least for me, there’s a certain musical feel or tone that plays in my head as I read an issue of Legend, so I was curious as to whether there are any artists or types of music that inform your work as you write the comic.

SS: Chris loves Bruce Springsteen, and often listens to him as he draws. He actually did one of the most gorgeous pages in the first issue while listening to “Darkness on the Edge of Town.” I love Bruce Springsteen as well, but the music that I channel for this particular post-apocalypse comes from the western suites of Ennio Morricone, and lots of Johnny Cash. I also have to admit that I often listened to the soundtrack from the Skyrim game while I wrote. Chris’s visuals recalled roaming that game’s dramatic, moody landscapes in my mind, and I found myself whistling along as I typed. 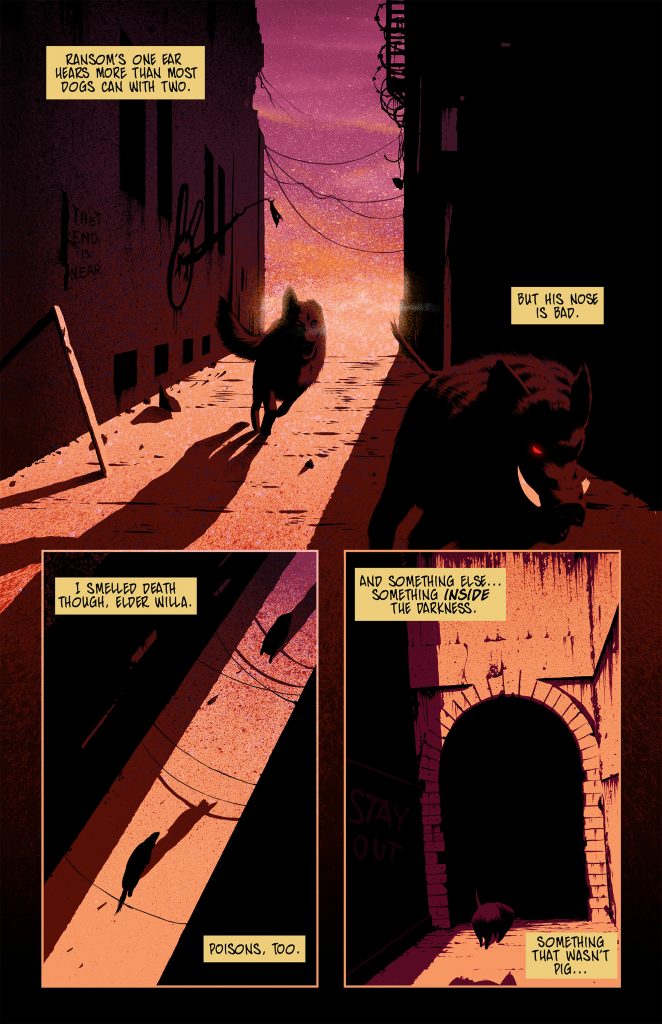 FS: The tenor of the country has changed dramatically in the past week or so. Has the election affected how you approach your writing, either with Legend or your other work?

SS: Oh boy, yes, the election will indeed affect Legend, and everything else I write. I have to say that releasing a book about the end of the world during what felt like to many (including me), the end of the world, was an interesting experience. If anything though, I feel like Legend is a story of resilience, and can be used as a tool to combat desperation. And I do believe we’re going to need a lot of fuel to fight what’s coming, so it’s important to me to make sure I contribute in the ways that I can.

FS: In non-Legend related news, I read you had a big announcement about another project you’re working on. Is there anything you can tell us about that?

SS: Sure thing! I’ll be releasing a serialized novel quite soon called Adventure Quest. It’s basically about a woman who enters a fantastical, D&D-inspired VR simulation to combat extreme depression, and I’m really excited to write it.

FS: Is there anything you can tease about the next arc? Or if there’s a next arc?

SS: At the moment, I’m concentrating on the release of this graphic novel, but if readers respond to Legend, there’s more stories for us to tell.

Legend Vol. 1, written by Samuel Sattin with Chris Koehler on art, is on sale now from Z2 Comics.

What if a biological terror agent wiped out most of humanity, and our domesticated animals were left in charge? How would our dogs and cats set about ruling and rebuilding the world? Ransom, the leader of the Dog Tribe, has been murdered by a creature known as the Endark. An English Pointer named Legend reluctantly rises to lead in his place, vowing to kill the monster once and for all. From acclaimed novelist Samuel Sattin and award-winning illustrator Chris Koehler comes Legend, where cat technology rules, dogs partner with hawks, and humans may be the most beastly creatures of all.

Also be sure to check out the official trailer for the paperback!