Celebrity and small-town living might seem diametrically opposed ideas, but they do have one key thing in common: You can’t really understand either unless you’ve experienced them. Writer Tim Seeley explores both ideas in his DC Comics/Vertigo title Effigy. We got a chance to speak with Mr. Seeley about how his experiences with small town life as well as meeting once-famous actors fed into the creation of his tale of a former child star. We also talk about the connection between God and Kim Kardashian. For real.

FreakSugar: What would be your elevator pitch for Effigy?

Tim Seeley: Basically, it’s an occult/mystery/adventure story through this Vertigo Comics filter wherein it deals with a post-famous former child celebrity where she has to investigate this strange murder that has these odd connections to her former TV show and it makes her question reality and fiction and reality TV and everything that comes in between.

FS: What was the genesis for the story? I come from a small town and I connected with a lot of the touch points you highlight in the comic. Did you draw from any personal experiences with small-town living?

TS: Yeah, the small town aspect is one of the parts and it sort of influences a lot of the stories I do since I grew up in a really rural area that was next to a mid-sized American city. And then I moved to the city so I’m now acutely aware of the difference between those things.

And since I’ve been doing comic books professionally, I’ve been going to comic book conventions for 12, 13, years now at least, maybe longer than that. Part of that always means that, whether it’s in the green room or the airport bar or at the car pick-up, you end up associating with formerly famous people or cult movie stars. Seeing their experience always interested me and I picked up a lot of the ideas hanging out with Power Rangers and Star Wars actors. That sort of “What do you do when you’re not in front of the camera anymore?” is something I find interesting. 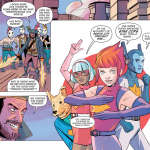 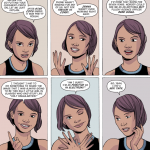 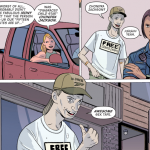 FS: Being from a small-town, I’ve seen people who’ve left to pursue a dream and come back when it didn’t work out, just like Chondra in the book.

TS: There’s always that kind of thing. I don’t think it’s fair that you have to admit defeat if you go to work in Hollywood and it doesn’t happen. There’s always going to be people around you that will say, “Oh, look who’s back. You had to go someplace else to work and now you’re back.” There’s a judgment to that from people who were insulted that you left. Whereas, in most cases, it’s that you wanted to do creative stuff—writing, acting, whatever—and it’s hard to do from your small town. That was definitely the inspiration.

FS: The twists and turns keep the reader guessing. At first the comic seems like a story of a washed-up actress from the kids’ show Star Cops, then police mystery, then it gets a bit esoteric at the end. Will all of these threads will lead back together?

TS: Yeah, and I’ve hitched on doing that sort of thing because I enjoyed doing it on my book Revival. What I love about comics is that you can introduce so many weird ideas that seem disconnected, but they can share the same page and you can really start to relate them because of how comics invites you to fill in the gaps between the panels. And so, since comics already invites you to do the leg work, you play with mystery. I hope that those weird, story elements can carry on for the next 10 years. I think there’s plenty of crazy stuff introduced that has lots of possibilities.

FS: Chondra is a former child star, but it’s her mom who seems desperate to get back in the limelight. Was it also your intention to comment on our fame-obsessed culture?

TS: For sure. I know sometimes people don’t like that directed at them. But part of what I wanted the book to be about is the sort of escalation of fame obsession in America and the way that religion plays a part in our lives. I think faith and religion has so many similarities with how we treat famous people. And not just in a worshipping way, but also in a way that we rely on those things to validate our own existence. They help to deal with the fact that you’re put on this Earth and you don’t know your purpose and you hope you do the best with it and that it means something. And how that relates to dealing with something bigger than yourself, whether that’s God or Kim Kardashian.

FS: What can we expect next issue?

TS: We go to a Star Cops convention, which is going to be a pretty crazy homage-satire to my own experiences. And we’ll look at elements touched on in the first issue that you don’t really see until issues two, three, and four. And by issue seven, we totally throw a wrench in and do something surprising that will make sense.

Effigy #1, which we gave a rockin’ review, is in stores now. Issue 2 arrives at newsstands next week.