First of all, Happy Batman Day! Hopefully, you’re all gathered around your Batman tree singing carols such as “Jingle Bells, Batman Smells” and staring pensively into the abyss. However you celebrate, remember to keep the Bat in Batman Day!

Batman’s been around in the public consciousness for 76 years now, but, even so, here’s the score: Young Bruce Wayne, after seeing his parent gunned down before his eyes, decides to use his considerable wealth to train himself into an avatar of justice, waging war on the criminal element that took his family from him. Adopting the identity of The Batman, Bruce works tirelessly to bring criminals to justice to ensure that his city and the larger world are safer from those that would do them harm.

And, throughout scores of stories during those 76 years, the Dark Knight Detective has done just that, fighting criminals and supervillains day-in and day-out in order to take his own personal tragedy and make it a transformative force for good. However, a question that’s often brought up by comic book fans and writers alike is whether or not Bruce Wayne is truly doing everything he could be doing to stymie the growth of crime in his city and beyond. On the surface, that question might seem far afield. In his work as the Caped Crusader, Bruce has put aside romantic entanglements, let familial relationships suffer, and pushed his mind and body to exhaustion and, often, to great danger. Surely, Bruce’s devotion to his one-man war is beyond reproach. 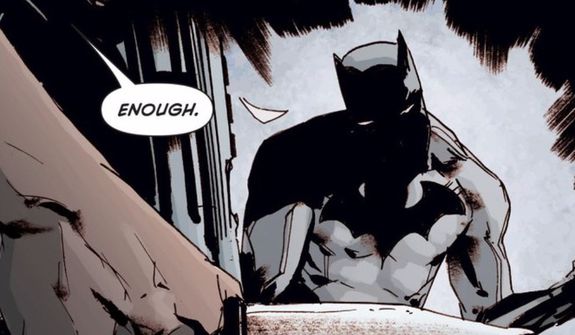 However, the question isn’t whether his devotion is lacking. I don’t think any reader would argue that Batman the character is anything but completely and utterly committed to his mission. The question whether his time, energy, and would be best directed elsewhere and, ultimately, do more good than he does as a Weird Creature of the Night. Could Bruce Wayne better save his city as a full-time philanthropist? Or, barring that, what is Bruce doing to address the systemic roots of crime in his role as Batman?

That’s not to say that Bruce isn’t charitable. One of the hallmarks of Bruce Wayne’s character for decades is his decision to carry on the legacy left behind by his parents and to funnel money and resources into helping the downtrodden and destitute of Gotham City through the umbrella philanthropic organizations which, for the purposes of this article, will be referred to as the Wayne Foundation. This foundation, funded through profits from Wayne Industries various capitalistic enterprises, contributes to scientific research, medical funding, the arts, orphanages, housing and feeding the poor and the sick, just to name a few of its efforts. In an enormous way, Bruce is keeping Gotham City afloat just with the Wayne Foundation alone, aside from his efforts as a vigilante. 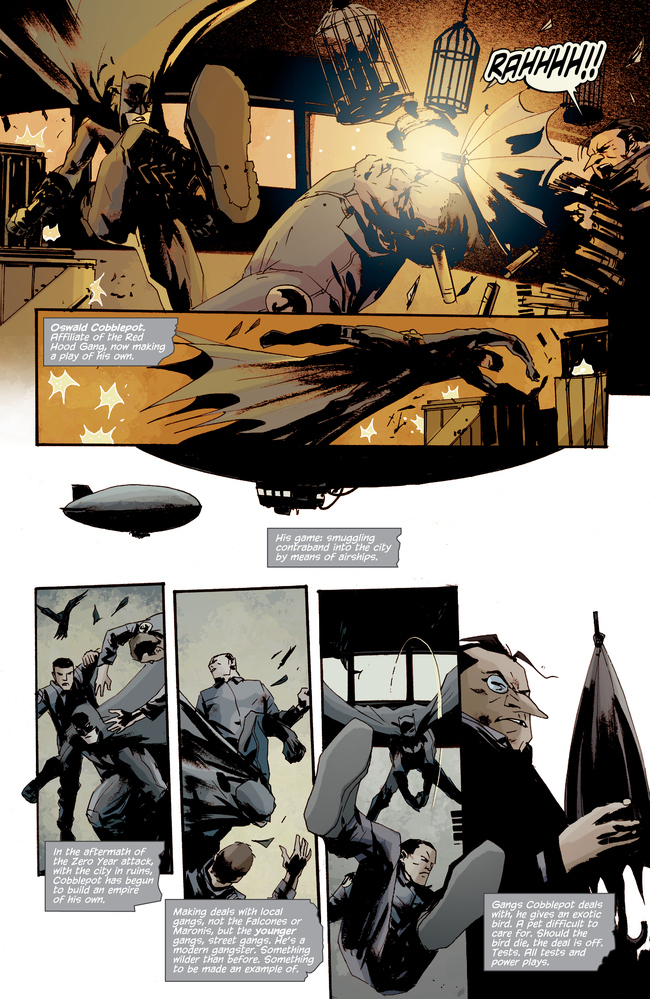 Still, could Bruce do more by throwing himself completely into such efforts without the spectre of Batman looming to pull him and his resources away? While he is charitable with his resources, is what he’s doing as Batman addressing the larger problems that deal with the systemic nature of crime and what causes decent people to lash out and become desperate, committing unlawful acts merely to survive? This is a question that writers Scott Snyder and Brian Azzarello and artist Jock address in Batman #44, in stores now. Early in his career, Batman is investigating the death of Peter Luggio and the wherefores and whys that led to his demise. Bruce discovers that Peter’s dealings with the Penguin and other criminals in an effort to protect his family from the increasing violence permeating his neighborhood. A confrontation with a police officer leads to Peter’s death, with echoes of too many stories we’ve seen in the news of late.

However, as a young Dark Knight reflects on the death of Peter, he realizes that it’s not as an open-and-shut case as it may seem. The police officer might have pulled the trigger, but Peter’s slide into crime wasn’t the act of an evil young man, but an act of desperation. And Bruce begins connecting the dots. The Penguin’s machinations and actions as a crime lord made the streets more unbearable to navigate as a law-abiding citizen. The gangs that flooded into Peter’s neighborhood made merely living a minefield of depravity. 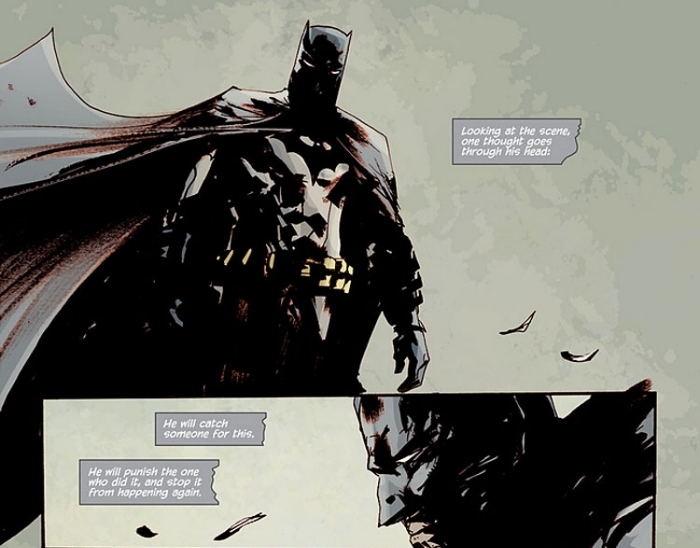 And maybe the biggest punch to the gut, Bruce himself realizes he had a hand in Peter’s murder. After Gotham had been ravaged by the Riddler, Bruce Wayne revitalized demolished neighborhoods to renew and revitalize the city. In the process, however, property values went up and gentrification drove out many of the residents of the neighborhoods who could no longer afford to live in their former communities. Ultimately, when folks get desperate, crime seems to be more and more of a viable option. In that realization, Bruce comes to understand that it’s not enough to drive criminals into shadows because that only puts a bandage on a larger issue. Sometimes the closed fist has to become an open hand.

All this is to say, it’s not entirely clear, to me at least, that Bruce could or could not do a better job if he were to hang up the cape and cowl for a life of full-time philanthropy. The night is dark and full of terrors and sometimes, in the treacherous city of Gotham, Batman is that thin black line between the citizenry and the dark. And, really, I don’t know how many people (other than me) would read a comic book series called Bruce Wayne: Philanthropist. However, there’s something to be said for a Batman, if he’s not going to devote his efforts completely to philanthropy and community organization, who is a better equipped crimefighter when he acknowledges the systemic roots of crime and addresses those roots in between swinging through the city and roughing up bad guys.

Related: Scott Snyder and Jock on Batman and Economic Disparity