If you’re even a passing fan of the Twentieth Century Fox Aliens franchise, you’ll know that whenever humans come in contact with the series’ acid-blooded xenomorphs, it’s always a chest-bursting good time. In honor of the films, the movie studio has declared today, 4/26, the very first Alien Day, picked for the fictional moon LV-426, where things went sideways for Ellen Ripley and company in the first two Alien films.

Dark Horse Comics is getting in on the fun this week with the launch of its new series Aliens: Defiance, debuting Wednesday. I had the chance to speak with series writer Brian Wood about the conceit of the story, how it fits into the overall Aliens mythology, and which film made him a fan of the franchise.

FreakSugar: For folks who might be considering picking up Aliens: Defiance, what’s your elevator pitch for the series?

Brian Wood: Aliens: Defiance is a new ongoing comic series in the mold of the original films: blue-collar work-a-day types facing off against the threat of an Alien infestation. Or attack. Or impregnation. Maybe all of the above. At the front is Private Zula Hendricks, a Colonial Marine currently recovering from a traumatic battlefield injury, and Davis, a Weyland-Yutani security synthetic. Due to finding themselves in the absolute worst place and time, they take it upon themselves to make sure a derelict ship full of xenomorphs never makes it to earth.

FS: I believe this is your first venture into writing the Aliens universe. What were some aspects or beats that you wanted to make sure you included in this initial run?

BW: All the details that I loved about the original film: a working class female lead, a ship (ours is the Europa), a synthetic that ends up surprising you in how human it can be, and of course Aliens. One of the challenges, I’m finding, in writing a monthly comic is making sure there’s an Alien fight in each issue, and making each of them unique, interesting, and moves the plot forward. A fun challenge, of course. 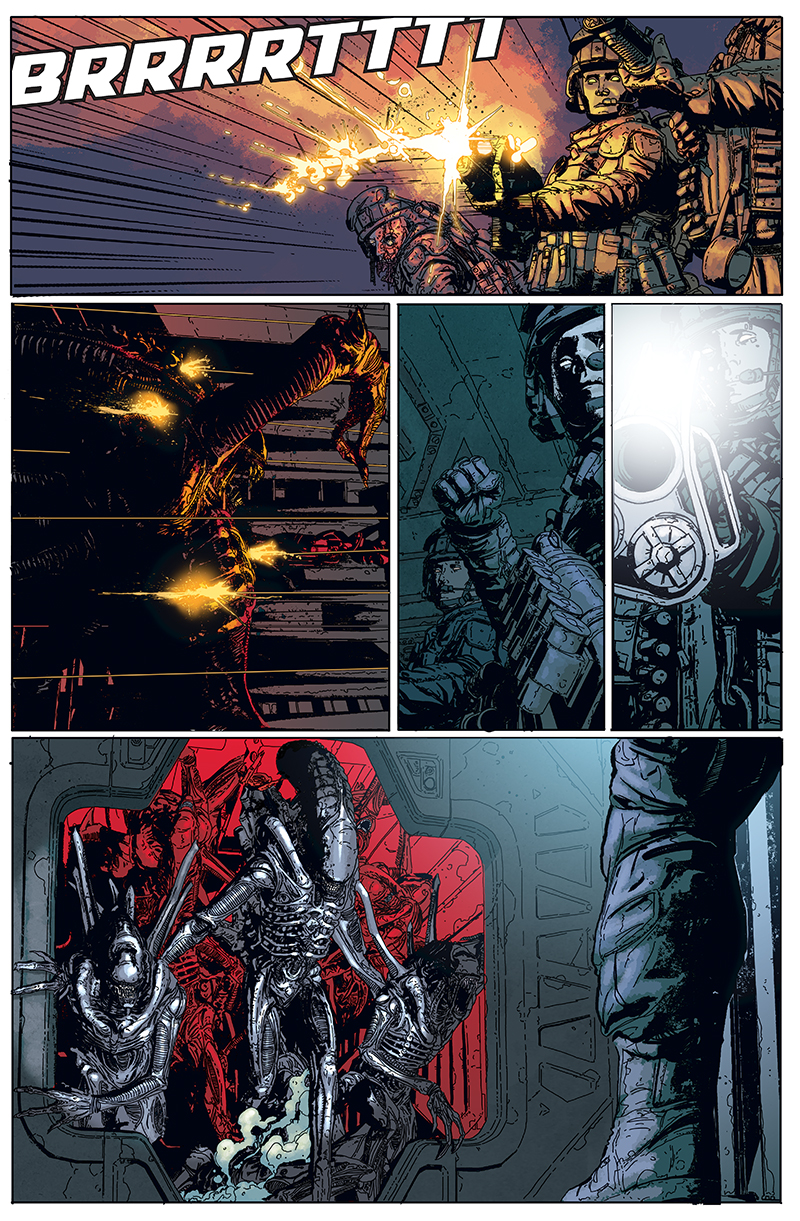 FS: What can you tell us about Private Hendricks? Beyond wanting to take out the xenomorphs, what drives her to take up with the synthetic Davis?

BW: Circumstances at first. Zula is technically off-duty due to injury, but she’s assigned as a sort of military minder to a squad of Davis units as they investigate this derelict hauler. So she did not want to be there, and her decision to stick around for the larger tasks that develop is one born of a strong sense of duty. She’s a Marine, and that means something to her, even if she has to break the rules and go AWOL to accomplish it.  Hence the “defiance” in the title.

FS: From the first issue, the Weyland-Yutani company seems to already know about the xenomorph species. Where does your story fit into the overall Aliens mythology?

BW: Well, yes and no. They suspect something, and they are always on the lookout for interesting stuff from deep space to turn into corporate profits. Readings suggest there might be something juicy aboard this derelict, but they don’t know what it is.

This series is pretty early in the timeline, about 17 years after the events of the first film. The xenomorphs are pretty much completely unknown to humans at this point. They certainly are to Zula and Davis. 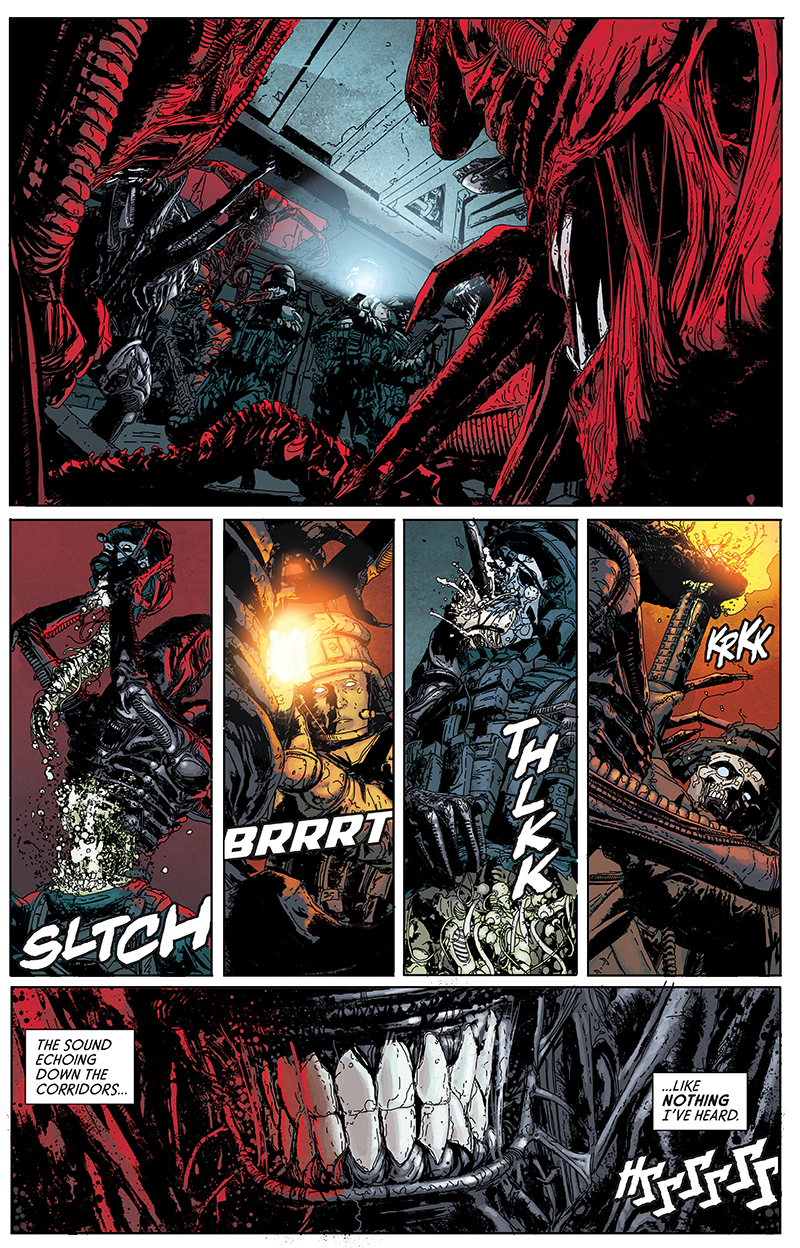 FS: The grit and immediacy of Tristan Jones’ linework seems to fit right in with the Aliens universe. What was the collaboration like with him on the book?

BW: Tristan is a new friend of mine, and when I first became aware of his work by following him on Instagram, his feed is FULL of Aliens stuff. The guy is a superfan, so much so that the powers that be at Fox know his work well. So it was all of 10 minutes of work to get him approved on this series. If you ask him, he’ll say he was born to draw this book, and having a hardcore fan like him around helps me with the scripts.

Dan Jackson, who’s coloring the book, is great as well. We’re all working well together. Later on in the series, when Tristan takes a short break to catch up, we’ll have a couple issues drawn by Riccardo Burchielli, my DMZ co-creator. 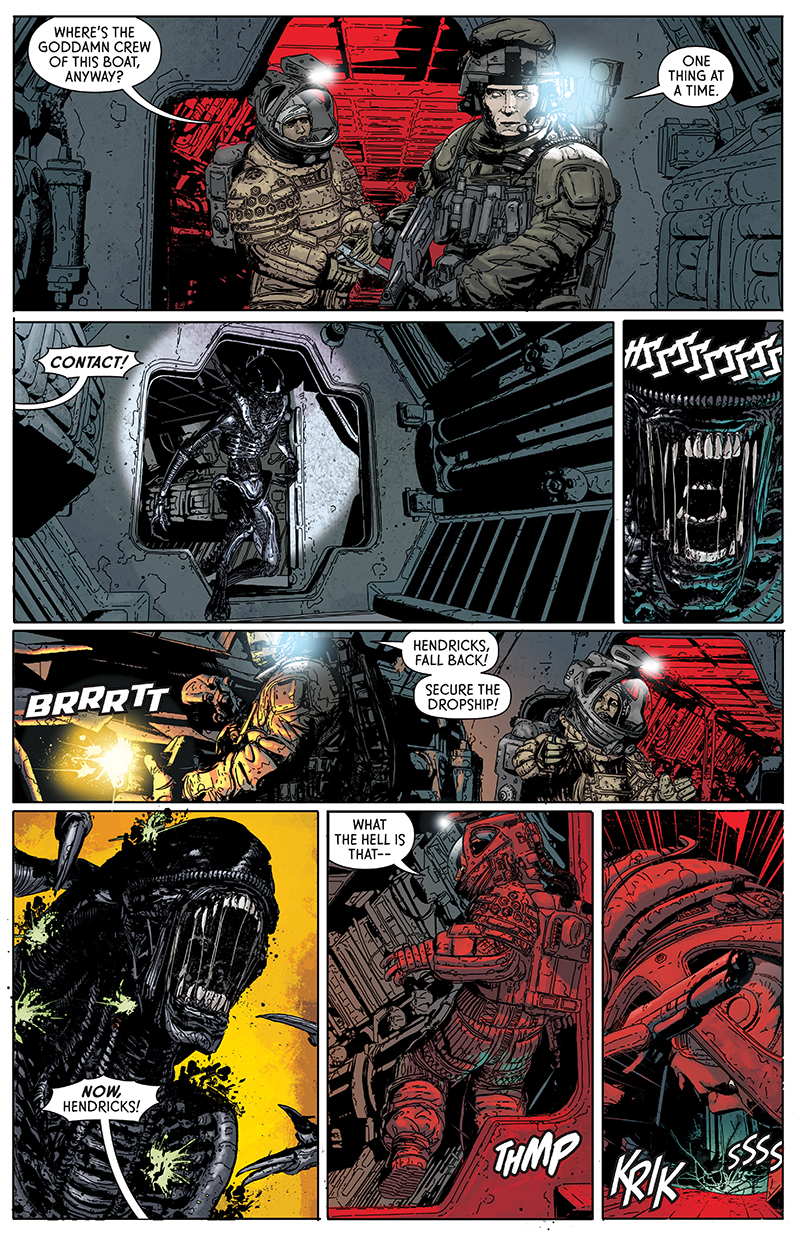 FS: I think everyone has a favorite Alien film that acted as a gateway drug to the franchise. What was yours? How did it influence how you approach storytelling?

BW: Honestly, the 3rd and 4th films were the gateway, even if they aren’t considered by the superfans to be the best films. It’s a quirk of my age – the first two films were things my media-wary mother wouldn’t let me see at the time. But right now it’s the 70’s aesthetic of the original film that influencing me most on this series.

FS: Creators keep coming back to the world of Aliens time and again, and each has something new to say. What do you think the appeal of the Aliens universe is for creators and, specifically, for you?

BW: Aliens is that sort of storytelling that seems to be universal. I’m not sure I’ve ever been able to articulate it that well, since it is such a primal thing. It’s fear – fear of the dark, of the unknown, of an unstoppable force, a biological fear, a claustrophobic fear, and the idea that ordinary people can rise up to meet those fears and overcome them… it’s potent stuff. 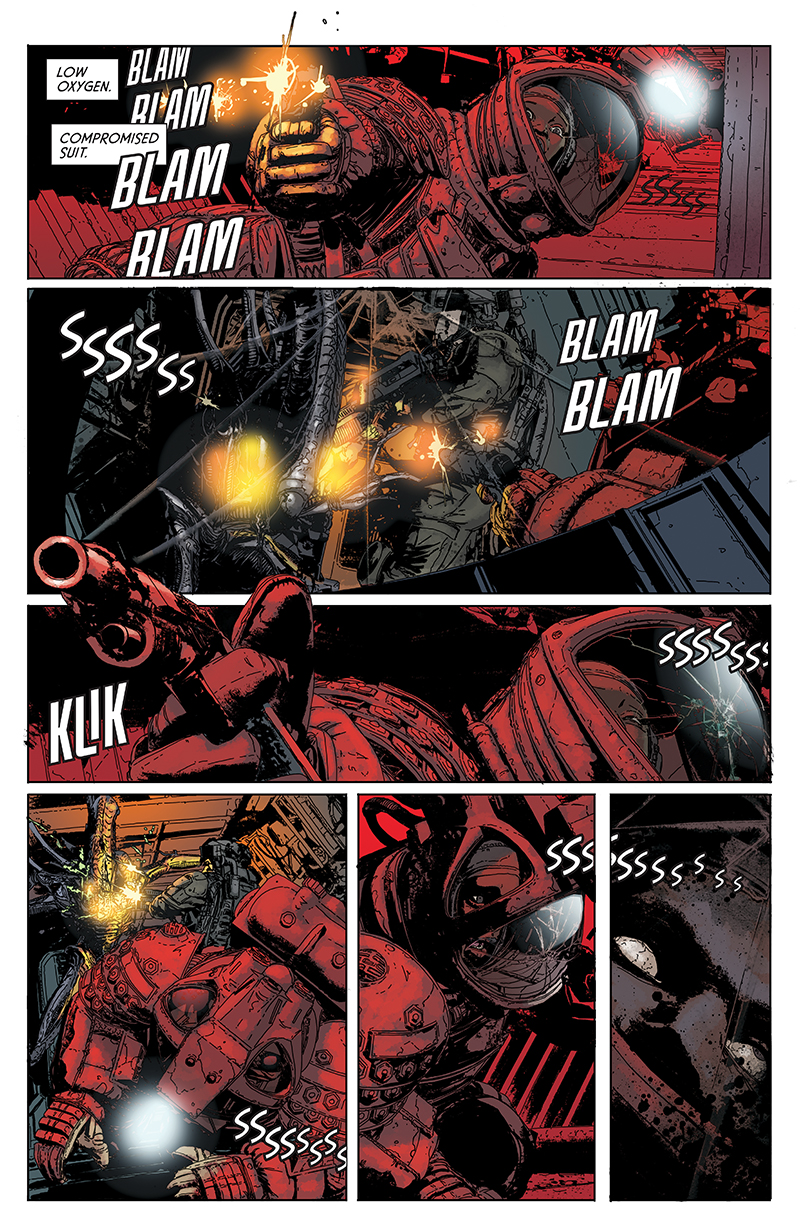 FS: What can you tease about we can expect to see next issue?

BW: One of the things I love about this series isn’t just the xenomorph battles and the 70’s vibe, but the fact we’re given a lot of leeway to build a strong character drama as well. Zula and Davis, they come to have a strong, unique relationship. It’s my goal, all our goal, to elevate Zula to the ranks of the iconic Aliens characters.