Music is a powerful force in the world, one that can unite disparate people, galvanize groups and causes, and inspire individuals to transcend their current personal life situations. The punk movement and the music it brought did just that, so it’s no wonder that writer David Barnett would want to use what the era had to offer—at least in part—for his new comic series Punks Not Dead from IDW Publishing and Black Crown.

In Punks Not Dead, Fergie, a 15-year-old who’s lived a less-than-normal existence due to his mother’s money-making schemes, is plagued by even more weirdness in his life when a ghost who appears to be the spirit of the Sex Pistols’ Sid Vicious starts hanging about with him. While that idea is hook enough, Barnett uses the series to comment on not just the punk era, but also the usefulness of ideas and whether those ideas have a “sell by” date.

Mr. Barnett spoke with me recently about the conceit of Punks Not Dead, the ethos of punk, and what we can expect to see in the book moving forward. 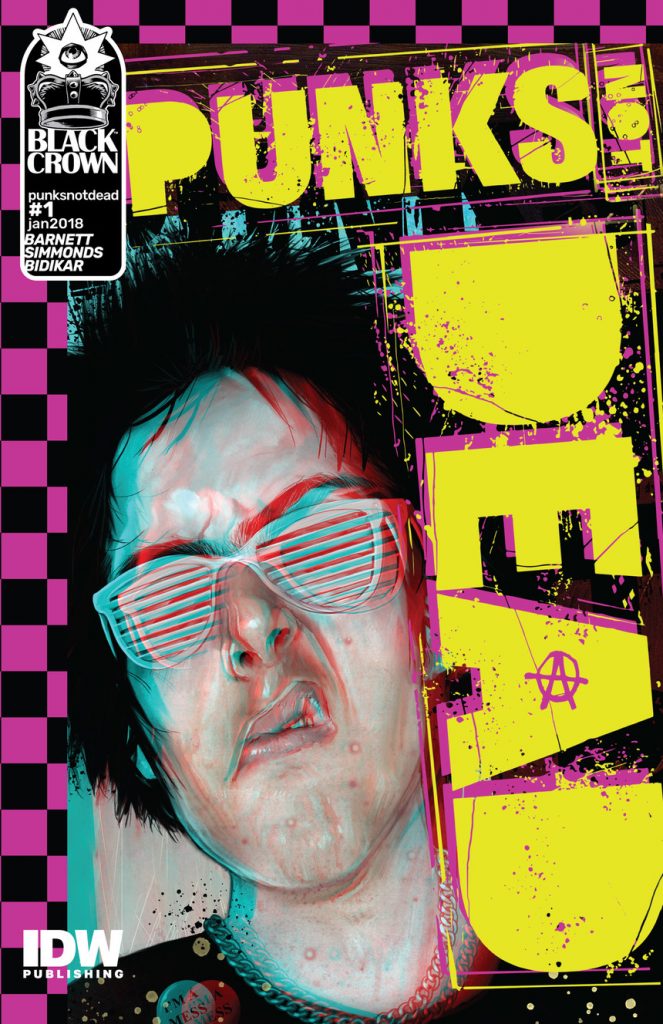 FreakSugar: For folks considering checking out the book, what can you tell us about the conceit of Punks Not Dead?

David Barnett: The basic question at the heart of it is, what if you were a 15-year-old kid and you were the only person who could see or hear the ghost of a dead punk rocker called Sid? Now, what if you and Sid couldn’t go more than 20 or 30 feet apart? That’s what happens to Fergie, and while it’s fun at first, the logistics of it quickly begin to sink in. Add to that we’ve got a quirky government department that investigates the supernatural showing an interest, and things start to hot up.

FS: What can you tell us about Fergie and Sid, our two protagonists of the book?

DB: Fergie is 15, and has a fairly unorthodox life. He’s never known his father and his mum Julie doesn’t offer any clues. She also has a fairly weird approach to parenting, making money by going around with Fergie to trashy tabloid magazines and daytime TV shows telling tall tales. Fergie’s a bit lonely, doesn’t really have any friends, and is a target of bullies at his school. But things start to change pretty wildly when he meets Sid. Now Sid thinks he’s exactly who he looks like – one of the most instantly recognisable punk icons in history. The thing is, Sid’s going to have quite a big surprise when he finds out that he’s much more than “just” a ghost. Their journey together will see them trying to make sense of their situation. It’s a real odd-couple relationship. 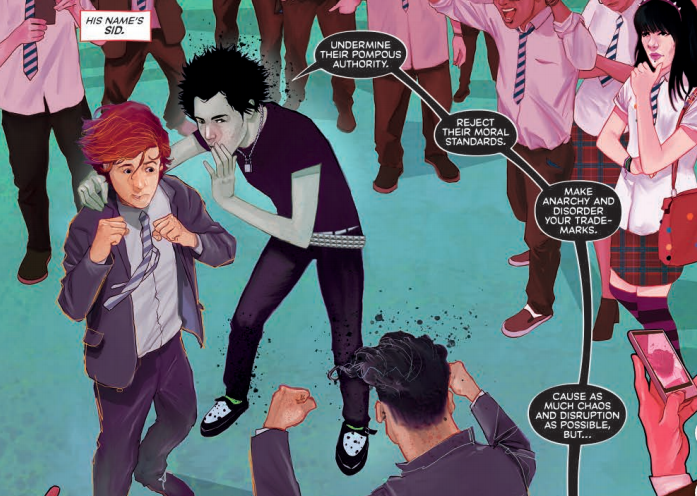 FS: While Sid may have the look and feel of what we know of Sid Vicious, in the end notes of the first issue, you make it clear that he’s definitely notSid, but rather the Spirit of Punk Rock. Before we get into the latter, why did you zero in on using the likeness/idea of Sid Vicious as the representation of punk over his peers of the time?

DB: The thing with (the real) Sid Vicious is that he’s a character, almost a cartoon, himself. He’s a persona. And as such, he kind of embodies the whole ethos of punk. Fake it until you make it – Sid couldn’t even play the bass guitar properly. He was also really, genuinely interested in the idea of anarchy, unlike other punks who might have used it in some cases as a bit of set dressing. So he’s the perfect visual embodiment of the idea of punk… and also for what Sid actually is, which he finds out through the course of the story.

FS: Following up on that, why did you decide on examining the idea of punk in Punks Not Dead? What is it about the music and the lifestyle that bear examining at this particular moment in history?

DB: Punk was a moment in time born of a desire for change and reform and a do-it-yourself attitude, and as such has a lot of synergy with the current time. But Punks Not Dead is not just a slavish salute to the punk era, because Fergie is a very modern kid. We’ll be looking at how nostalgia isn’t necessarily always a healthy thing, and that might cause some clashes between Sid and Fergie as the book goes on. 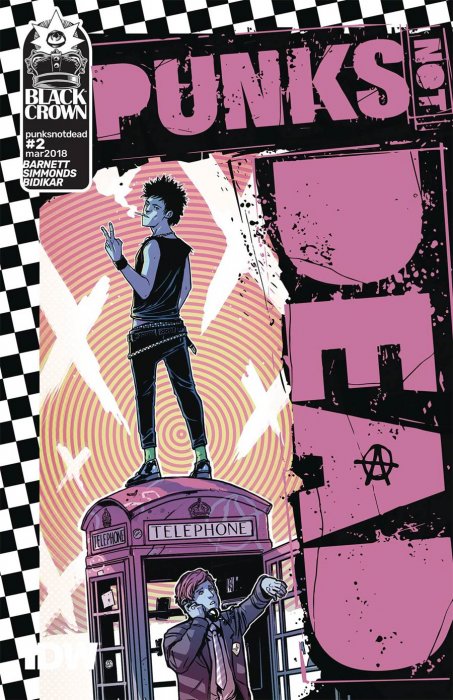 FS: We’ve seen the appearance of Sid and the idea of punk introduced in the first issue. Can we expect to see other aspects of the punk movement crop up in the series?

DB: Definitely, but in the same way as this isn’t really a book about the punk era, those aspects might not necessarily be portrayed through rose-tinted glasses. The whole book is actually built on music, and how that can have both a redemptive power and be a galvanising force. There’s a duality with Sid… he was at the forefront of a moral panic, a youth movement that put fear into the establishment. But that was over 40 years ago. Are his lessons for Fergie still relevant? Or does Fergie have to find his own way?

FS: Ferg and Sid aren’t the only characters sharing the spotlight. What can you tell us about Dorothy Culpepper?

DB: Dorothy is a divisive character. She might be the villain of the piece, because you can imagine that as the head of the Department for Extra-Usual Affairs she’s going to have Sid in her sights. But there’s a bigger picture here, which even she isn’t aware of right away, and it’s going to turn into something that is about a lot more than a boy and his ghost. In fact, things are going to get hairy for absolutely everyone, and we might be very glad we’ve got Dorothy on our side when our backs are against the wall.

FS: Following up on that, Dorothy seems very good at her job. Why does she do what she does? Is it because she’s so skilled with it or does she also have a vested interest in keeping any and all visitors from the other side into the material plane?

DB: We gradually find out that, like Sid, Dorothy isn’t what she seems. We have one issue coming up that looks at Dorothy in the 1960s, where a lot of secrets are revealed and we find out just who she is, just how old she is, and why she works with DfEUA. Giving too much away right now would spoil that, but suffice to say you’ll never look at Dorothy again in the same way after reading that issue. 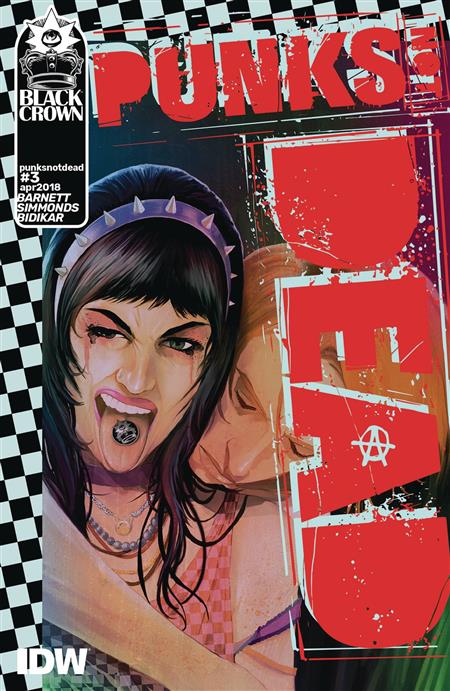 FS: Brexit was mentioned at one point in the issue. Are there any parallels or analogies that can be drawn from how Dorothy views visitors and how some extremists Brexit supporters view what they see as interlopers?

DB: Dorothy’s job is to keep Britain safe from supernatural forces from the outside. We’re going to see an example of that which directly dovetails with Fergie and Sid’s story, from Dorothy’s past. Without giving too much away, Dorothy’s going to learn that radical attitudes which threaten our way of life are very often created by our direct treatment of people (though I’m using “people” very loosely here), so, yeah, there’s definitely a very contemporary parable here.

Punks Not Dead #2, written by David Barnett with Martin Simmonds on art, is on sale now from IDW Publishing and Black Crown.

The ghost of dead punk rocker Sid is unlocking some pretty strange abilities in teenage geek Fergie, giving him a taste of power that he never imagined. But will he use it to clean his room, alter the solar system… or pick up girls? Meanwhile, MI5’s irascible baller Dorothy Culpepper and her nervous new recruit are drawn to the Extra-Usual Affairs involving a scandalous haunting in Whitechapel in “Teenage Kicks,” Part 2!