Social media, as we all know, can be a hellscape of trolls and the angry and entitled spewing hateful bile across the Internet. Have you ever been reading these comments online and wish you could confront whichever “brave” instigator behind a screen and a keyboard is bullying a person or persons? That’s the idea behind Outrage, a new webcomic coming from LINE Webtoon launching this Wednesday, September 12th, written by Fabian Nicieza, drawn by Reilly Brown, inked by Jake Leisten, colored by Matt Herms, and lettered by Pat Brosseau. In Outrage, an individual who can surf the Internet and physically appear at the source of the venom someone spews on social media decides to take matters into his own hands to clean up the web’s netscape.

In honor of the webcomic’s debut, we’re proud to share with you our exclusive preview of Outrage Chapter 1! 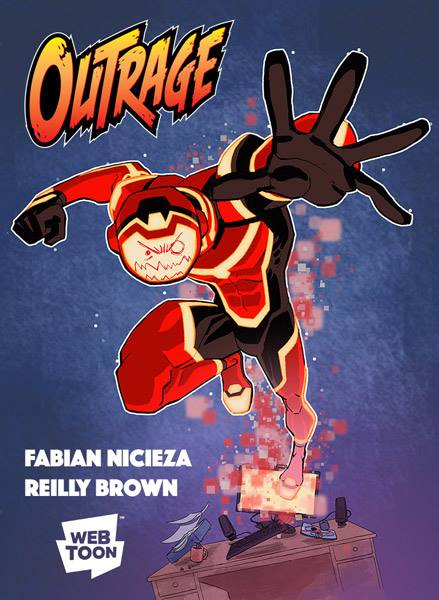 From the official press release about the webcomic:

Best recognized as the co-creator of Marvel’s Deadpool and X-Force, writer Fabian Nicieza is familiar with drawing readers into the world of crime and justice. He has written and created dozens of storylines and characters for Marvel, DC Comics, and Dark Horse, including New Warriors and Thunderbolts. A comic book artist and illustrator who started self-publishing comics in 2002, Reilly Brown has since worked for Marvel, DC, Dark Horse, and Archie. He is best known for his work on hit comic franchises such as Deadpool and Spider-Man. Brown is also a founding member of the Internet artist collective Ten Ton Studios.

Their newest series, Outrage, is the story of a mysterious individual who can navigate the Internet and physically manifest at the source of the vile bile that spews throughout social media. Along with an array of weaponry limited only by his imagination, Outrage can exact a swift, merciless pummeling of anyone who triggers, humiliates, mortifies, stalks, hawks, balks or otherwise abuses someone on the Internet. And also, anyone who doesn’t know the difference between their, there and they’re. But who or what is Outrage? Why is he – or she – so angry? And can this mysterious entity be tracked down before the interweb explodes with violence?

“As the world continues to become more connected and social media dominates the way people communicate, bullying and negativity unfortunately become more prevalent as well with users hiding behind the shields of their computer screens,” said Nicieza. “I wanted to take a unique spin on the vigilante, creating a new kind of cyber hero in the vein of Deadpool meets Mr. Robot meets The Office. I knew right away that LINE Webtoon and its huge digital community were the right audience for this series.”

“It’s an awesome experience to be working with Nicieza again for this series, because he pays me to say things like that,” added Brown. “Modern society is rampant with virtual abuse, and it has been a lot of fun bringing this vigilante character to life who is doing his part to stop the trolls.”

“Having people like Fabian Nicieza and Reilly Brown, who have made their incredible mark in the world of comics, come together and create a new series for our readers is very exciting,” said JunKoo Kim, Founder and Head of LINE Webtoon. “The subject matter of Outrage is something that all social media users can relate to and we know our readers are going to love it.”