Howdy, folks! Welcome to our latest installment of FreakSugar’s Flashback Friday. This week I’m taking a look back at one of the comic strips that, as a child, made me want to be a better artist and, eventually, a writer: Calvin and Hobbes. For our purposes, I’m throwing my gaze back at the first Calvin compilation I ever purchased with my own money, Homicidal Psycho Jungle Cat.

Recently, I did an informal poll on Facebook, asking my friends what their favorite comic strip of all time is. I got the expected answers of Peanuts, The Far Side, and Krazy Kat, but, more often than not, time again, my friends responded with Calvin and Hobbes. I had posed the question after rewatching Dear Mr. Watterson on Netflix, which is a documentary focusing on Bill Watterson, creator of the strip, and his famous boy-and-tiger duo.

(After reading this article, you should do yourself a favor and watch the doc. It’s very informative concerning the creation of the strip, the battles Watterson fought to retain his artistic integrity, and what Watterson’s peers thought of him. Even if you already know most of that, it’s still incredible for stirring the same wonder that the comic strip itself does upon reading.)

For those of you who aren’t familiar with Calvin and Hobbes, it’s about… Wait, what am I saying? Of course you are familiar with Calvin and Hobbes. Boy. Tiger best friend. Imagination running wild to the nth degree. Snow man art. Lazy afternoons spent under a tree. Calvinball. T-Rexes flying fighter jets. Get Rid Of Slimy girlS. Boom. And if you aren’t familiar with the strip, what are you doing with your life? Go. Get. Order some of the collections, read them, and find yourself transformed for the experience. I ain’t even kidding. I’ll wait.

You back? Okay, let’s continue.

If you happened to have read Homicidal Psycho Jungle Cat, the aforementioned Calvin and Hobbes collection, you should be good to go with following this article, but it’s not completely necessary at this point. I mean, that’s not to say you shouldn’t read it, but I think you’ll appreciate what I have to say about it if you’re even the most passing Calvin fan. As I said, Jungle Cat was the first Calvin collection I purchased with my own money after saving up for it. I had read the strip for years, being five-years-old when it first hit newspapers in 1985, but I had never owned my collection to go back to read and reread. Instead, I had to rely on going back and perusing my compilation of strips I had cut out of the newspaper. 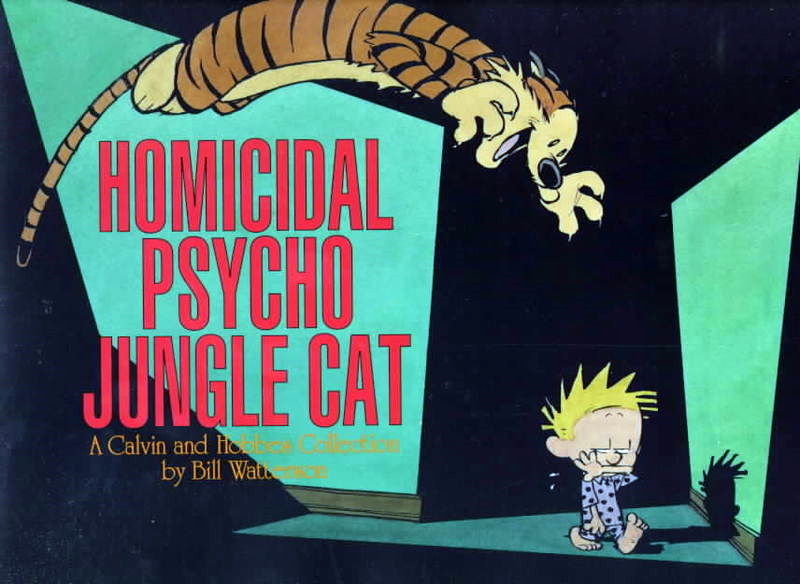 When I went to the bookstore to pick up Jungle Cat, there were quite a few Calvin collections available for purchase, but Jungle Cat pulled me in for a few reasons. One is the cover. “Don’t judge a book by its cover” and all that, but, damn, what a cover. The image of a gleeful Hobbes hanging midair, moments from pouncing on an unsuspecting Calvin, is one of those iconic scenes I’ll always remember first about the strip. Watterson could make dynamic scenes come to life in few strokes and far more limited space than many, if not most, of the cartoons clogging up television today.

Even if the cover hadn’t grabbed me, I knew I wouldn’t be disappointed in the contents. To this day, I can honestly say I have never read an installment of Calvin that let me down. Oh, there are some strips I appreciated better than others, but I have always been drawn in by the adventures of the boy and his tiger. And in Jungle Cat, all of the tropes and highlights of Calvin and Hobbes’ world were there: his put-upon parents; the philosophical undertones of so many of the strips; the gorgeous watercolor art found in Watterson’s work; his adversarial relationship with Susie Derkins; the wagon- and sled-ride conversations; the friendship between Calvin and Hobbes that is always beautiful but never cloying.

There are many reasons to love not just Jungle Cat, but Calvin and Hobbes as whole. The comic strip has such a spot in the hearts of its fans because Watterson refused to talk down to his readers. Folks young and old could read the strips and draw enjoyment out of them on a variety of levels. I think a lot of us saw a little of ourselves in Calvin, whether you were a precocious boy or girl. And while it would be cool to have a friendship with a talking tiger, the bond that Calvin and Hobbes shared was brotherly and soulful. As I write this paragraph, I can’t help but get chills and smile at remembering so many installments of the strip revolving around the duo trying to figure out the ways of the world and while appreciating that they had each other to weather the storm. So much has been discussed about the imaginative qualities that Watterson brought to the table, and I wholeheartedly agree with those assessments. For me, though, Calvin and Hobbes will always touch me the most in how it portrayed one of the purest friendships I’ve seen in nearly any medium.

And, for me, that’s why Calvin and Hobbes is the best.

Join us next week as I look back at what I think is arguably one of writer Brian Michael Bendis’ best and most-underrated series, Alias, which is getting its own Marvel/Netflix series and has had its lead cast. Now if you’ll excuse me, I’m going to go play a game of Calvinball with my bassets.