Oh man, Thrones is back! And is it just me or did it get kind of (more) racist up in here? It got kind of hilarious too, which, I’m not sure how I should feel about. Probably not good! But these are made up people, so it’s okay to have fun with stereotypes, no? Also, daddy issues, (some) boobs, and a bunch of beat downs handed out for the price of ‘on the house’. Season 4 premiere spoilers abound, obviously; but nothing beyond that so you non-book-readers can enjoy this worry-free.

So we all know what went down last season, yeah? Jamie came home, Jon gets back to Castle Black, Red Wedding, etc, yawn. And we actually start this season in medias res (keep up I have two years of high school Latin) as season 4 is going to finish out the rest of book 3. But this should be a good thing because after the Red Wedding, A Storm Of Swords picks up a breakneck speed and it’s really quite magnificent. If this excellent season premiere was any indication, the next 10 weeks should be a damn fun ride.

Alright TL:DR, I wanna LOL, where are the gifs???

They’re here, and there’s a lot, so hopefully by the time you’ve gotten to this paragraph they’ve loaded. But this is a new site, so things can happen, but whatever, it’s worth the wait, what have you done with your life lately anyway? Lay off me.

So the season 4 premiere, “Two Swords” starts off with an eponymous scene. It’s not super clear at first but yes, we are watching Tywin melt down Ned Stark’s glorious Valyrian steel long sword, “Ice” into two swords of lesser size and weight. And in case it wasn’t obvious from the title and description, the scene was literally dripping with red hot Freudian symbolism:

The larger of the two would be for Jamie, who is mightily impressed with the “fresh forged” Valyrian steel.

The smaller of the swords if for Tyrion. JK LOL, he’s an embarrassment to the family. Anyway, the sword is nice, but then it’s back to the same old with Jamie Lannister.

Outside the walls of Kings Landing, Tyrion and Bronn have been dispatched to welcome The Prince of Dorne, and we get our first taste of what is probably the most recurring epithet in A Song of Ice and Fire, which is that Dornishmen are extremely nondiscriminatory in their sexual proclivities.

I don’t know, one, probably? Is the joke that they fuck goats, or are bad at fucking goats?

Anyway, the Prince of Dorne doesn’t show up, because he’s too fat to make the trip. Tyrion is left feeling miffed and Bronn has trouble seeing things in the distance, which gave us the below gif. It doesn’t really have anything to do with recapping the episode, but seems like something I can use to react to things later in the season and then that’s one less gif I have to make and they actually take longer than you might think. I do it, gladly, for you though.

So we’re about eleven minutes into the episode and I don’t want to sound too much like a HBO suit but we’re gonna need some gratuitous nudity asap, you can almost hear people logging off their parents’ HBO GO accounts all over the country. Oh, nice:

Which brings me to one of the larger themes of this episode, people being wildly irresponsible with the shit that comes out of their mouths. Even if you don’t know that this is The Red Viper, he’s still a virile Dornishmen, carrying a weapon, and he enters the room like a badass.

So it’s beyond me that basically the first thing out of this dumb bastard Lannister’s face is:

To which Prince Oberyn responds:

No, wait, that’s not right. Oh yeah, he does this:

But then Tyrion shows up and is about as interested in caring that a Lannister is being mutilated as you would think he’d be, which is to say, not one bit.

Alright we’re about twenty minutes into this thing, and I don’t want to sound too much like a HBO suit, but I’m going need to see some mother fucking dragons. Oh, nice:

Not much really going on with Dany right now. She’s marching on the slave city of Mereen with her ludicrously awesome army of Unsullied, but she doesn’t really get up to anything this episode. On the plus side, Daario Naharis and Grey Worm are turning into pretty hilarious BFFs:

Low blow. Am I right? This guy knows what I’m talking about.

I appreciate that they speak the old tongue because I’m lazy and it’s easier to gif.

So that brings us to Sansa Stark, who’s now like 15, and entering her emo/goth phase and spends all her time sulking in the Godswood.

It’s not like ALL of her family members are dead, just a few! And she only thinks that the rest of them are dead, because everyone is telling her that, but COME ON. We all have our bad days, no need to be rude.

Just wanted to give a quick shout out to the season four foley editors! This was a little hard to catch and even harder to convey in gif form, but I think you get the idea:

So Jamie Lannister only has one hand, WE GET IT already.

I’ll just be over here with my one hand if you need anything.

Finally, back just south of The Wall, we catch up with Ygritte, Tormund Giantsbane and some Hornfoots (I think) just chilling, talking about how Ygritte let Jon Snow live, no big deal, when Styr, the Magnar of Thenn shows up and things once again get a little tense/racial.

They can’t be that bad right? I mean, how’s that suppose to make the Thenns feel? Why even try to be a good person if that’s what everyone already thinks, ya know?

Oh god never mind they are terrifying lock the car doors we’ll just walk on the other side of the street.

Back at The Wall, Jon Snow has to go before those sort-of in charge of the Night’s Watch about his supposed turn-cloaking and betrayal of Qhorin Halfhand. Jon admits to all of it, even “laying”  with a wildling woman, or as the Dornish call it – scissoring. When former Gold Cloak leader, Janos Slynt hears this, he instantly thinks that’s enough to have Jon executed and looks to the others with smug approval. Classic Slynt! But seriously, shout out to Dominic Carter, who really brought this character to life and I’m glad he’s back in season 4.

In case you forgot, here’s a quick reminder that Olenna Redwyne, the Queen of Thorns, gives absolutely zero fucks:

If we can go back to both the daddy issues and the saying really stupid things to people that can hurt you, badly, let’s talk about Joffrey! Who’s also too smug for his own good. Jamie and Ser Meryn of the Kings Guard are discussing security for Joffrey’s wedding to Margaery Tyrell. You’d think that this would be something worth taking seriously by Joffrey after the Red Wedding, but no, he just spends a few minutes talking sideways to his crippled uncle/father about his onehandedness. But what is so fucked up about this is Joffrey knows the rumors about his mother and Jamie, and at this point he has obviously searched his cold, black heart, and knows it to be true. But he’s still going to carry on being the biggest douche in Westeros. Anyway, here’s Joff doing a little smug dance. My mother always said I had a face fit for punching, never really got that till now.

Checking back in with the Sansa hanging out in the Godswood, she receives a visitor even though she EXPLICITLY STATED THAT SHE DID NOT WANT TO BE BOTHERED AND NO ONE EVER LISTENS TO HER UGH. Oh and it’s Ser Dontos, the Knight turned fool she saved during Joffrey’s name day celebration. This was a pretty innocuous scene but as with everything in this show it most likely was chock-full with foreshadowing and symbolism but I dropped out of semiotics so you figure it out.

On the plus side, Ser Dontos is likely going to be my favorite ‘frat daddy’ character this season.

Alright, we’re about 50 minutes through this thing, and I don’t want to sound too much like a HBO suit, but really, where the fuck is Arya? Because I definitely need my fix of the mad cap, buddy comedy stylings of: 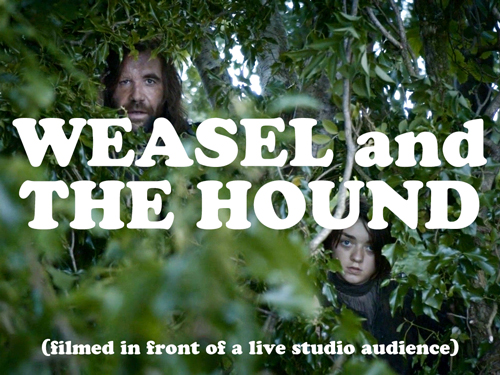 This is the one night of the week that father lets us wheel the TV cart into the dining room and it better be good!

The laugh track was a little much, but yeah, solid joke! Anyway, if you’ve read the books you know what’s coming next, Arya and Clegane stumble upon his brother, The Mountain’s torturers, raping their way through some unlucky farmer’s house and land. I’ve been waiting for this scene since the show started (not the rapey part, yeesh) the second half of it, and if it wasn’t already clear after the first couple minutes and/or because it happens almost every time he’s on camera, The Hound is about go beastmode:

And boy is he ever. Here’s a bunch gifs of The Hound sending these mark ass tricks to hell, provided pretty much without comment. The action keeps getting better and better in series. A++ would gif again.

Did I say mad cap before? I meant OH MY GOD WHAT IS HE DOING TO THEM!!??

And then Arya, sweet, sweet Arya. She finally sticks ’em with the fucking pointy end!

And that’s it! What a way to end an episode and start the season! You don’t need me to say it but this was a really strong premiere and I’m stoked as hell for the rest of the season. Hope you enjoyed this, I’ll be back here next week with another epic gif recap.

Feel free to drop a comment with any gif requests you might have from the episode. You can find me on tumblr here: charlienorwood.tumblr.com where I’ll be uploading a lot of these gifs as well (the ones in this post mostly won’t animate in tumblr because this town is full of gif stealing jerkfaces). Thanks!