We’ve all been cooped up from the very necessary social distancing we’ve been engaged in—seriously, stay indoors when possible, folks—and, if you’re like me, you’re looking for new, gripping yarns to help distract from the stir-craziness that inevitably sets in at times. 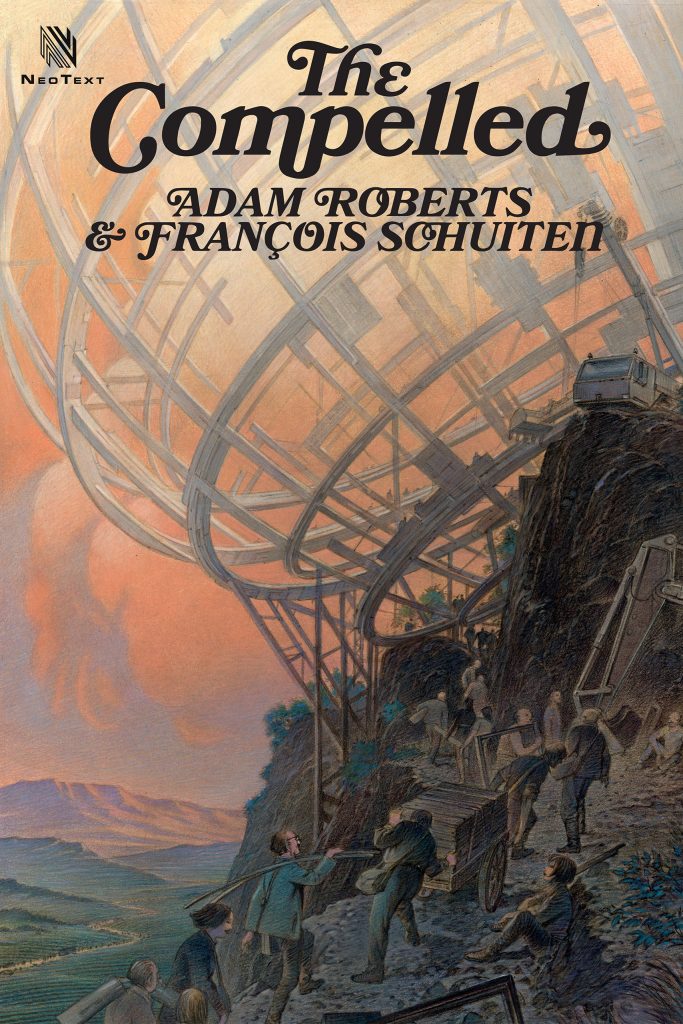 As such, you’d be doing yourself a disservice if you didn’t give writer Adam Roberts and illustrator François Schuiten’s new novella The Compelled a gander. The tale, available digitally today from Neotext, follows as people who seem to have no connection or binding thread amongst them as they gather random (?) objects to form imposing, monolithic structures—but why? And what do these machines do? Is their purpose benevolent—or sinister? 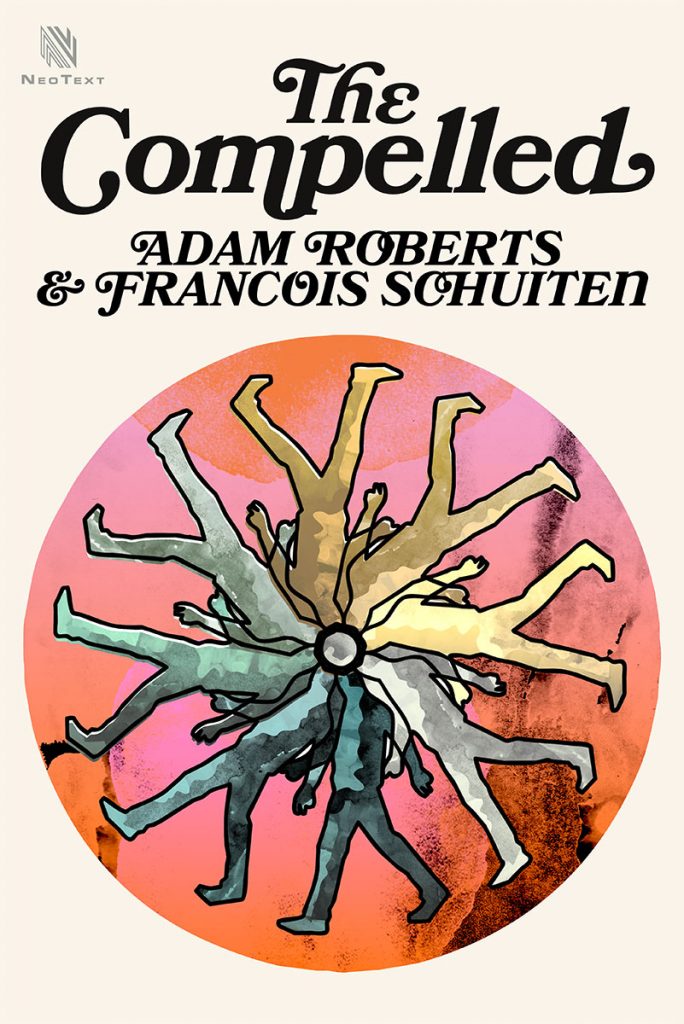 The Compelled has an undercurrent of unease that runs throughout the narrative—in the best way possible. If you’re a fan of mysteries and maybe like a dash of sci-fi to accompany them, this novella is more than worthy of a look.

The Compelled is available for digital download now from NeoText. Read a page of Chapter One below! 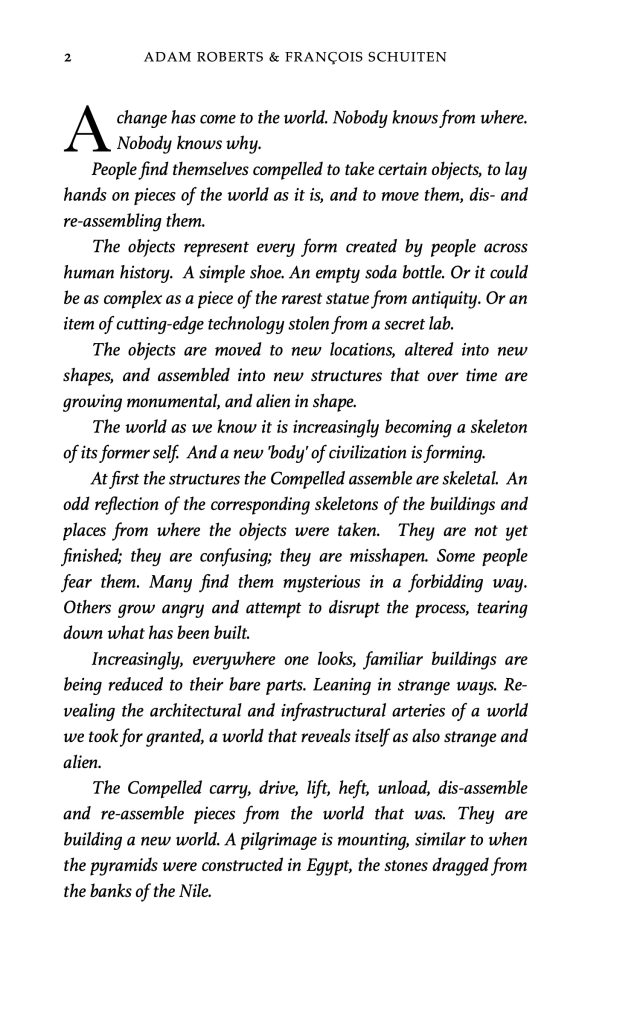 A mysterious change has occurred in humanity. Nobody knows how, why or exactly when this change came about, but disparate, seemingly unconnected people have become afflicted with the uncontrollable desire to take objects and move them to other places, where the objects gather and begin to form increasingly alien, monolithic structures that appear to have vast technological implications. Some of the objects are innocuous everyday things—like a butter knife taken still greasy from a breakfast table or a dented cap popped off a bottle of beer. Others are far more complex—like the turbine of an experimental jet engine or the core of a mysterious weapon left over from the darkest days of WWII.

Where is the Compulsion coming from? And— more importantly—when the machines they’re building finally turn on, what are they going to do?

“In writing THE COMPELLED I was hoping to create a mood of properly science-fictional mystery, a sense-of-wonder that works as much through a series of visual images as through consecutive story-logic and rational worldbuilding,” said writer Adam Roberts. “Writing was a process of juggling lots of different characters from lots of different backgrounds and situations and slowly bringing them together for the big finale. It’s quite a complex machine, but I hope all the individual parts move together to spin the mechanism and stir something strange into motion.”

THE COMPELLED is accompanied by the breathtaking stylized art of renowned French-Belgian artist François Schuiten and is the first book-length science fiction publication that Schuiten has illustrated. “One of the most exciting things about this project was the chance to work with François Schuiten, an artist I have long admired, and whose work resonates so brilliantly and powerfully with that kind of dream-potent visualisation in THE COMPELLED,” said Roberts.

Haunting and evocative, THE COMPELLED will be available digitally on August 25th for $2.99.

Adam Roberts is often described as one of the UK’s most important writers of science fiction. He has been nominated three times for the Arthur C. Clarke Award: in 2001 for his debut novel Salt, in 2007 for Gradisil, and in 2010 for Yellow Blue Tibia. He has won the John W. Campbell Memorial Award, as well as the 2012 BSFA Award for Best Novel. His most recent fiction includes The Real-Town Murders (Gollancz 2018), The Black Prince (Unbound 2019) and Purgatory Mount (Gollancz 2021). Roberts reviews science fiction for The Guardian and is a contributor to the SF ENCYCLOPEDIA. He is a Fellow of the Royal Society of Literature. His science fiction has been praised by many critics both inside and outside the genre, with some comparing him to genre authors such as Pel Torro, John E. Muller, and Karl Zeigfreid.

François Schuiten is a Belgian comic artist who was born into a family of architects. Since 1980, he has worked with Benoît Peeters on The Obscure Cities series. His graphic novels have been translated into a dozen languages and have received numerous international awards. He has also created many illustrations, posters and postage stamps across Europe. In 2002, he received the prestigious lifetime achievement award from the Angouleme festival. He published his first solo effort, The Beauty, in 2012, and designed a train museum, Train World, which opened in Brussels in 2015. His 2014 exhibition and accompanying book, Revoir Paris, met with international praise. In 2019 his adaptation of the long running French comic Blake and Mortimer was a runaway French comics industry bestseller, selling over 300,000 copies.