Whether you follow one of Abrahamic religious traditions or have just been remotely exposed to pop culture in the least, chances are you know the story of Cain. According to the tradition detailed in the book of Genesis in the Bible, Cain was the firstborn son of Adam and Eve, cast out and away from his family by God after committing the world’s first murder, killing his brother Abel. Marked by Yahweh and protected by premature death, he leaves his family and wanders into the wider world.

In writer Jason Aaron and artist r.m. Guera’s new series The Goddamned from Image Comics, we get to see what happened to the first son thereafter, living with the curse of immortality for 1600 years and watching the world decay into depravity. Unbeknownst to Cain, Yahweh is preparing for the End of All Things, wiping the slate clean to let humanity start anew.

Mr. Aaron recently spoke with me about the genesis of The Goddamned, how the series is an amalgam of many genres, and his love of apocalyptic stories.

FreakSugar: First of all, I have to tell you how much I adore this book. I am a religion major and nerd and, of course, I love comics, so this first issue felt like the perfect marriage of everything I love.

Jason Aaron: [laughs] That’s good, you don’t get a lot of Bible comics these days.

FS: You certainly don’t. I collect the little Jack Chick tracts that are scattered all over the place.

JA: [laughs] Yeah, I wish we could run a Chick tract feature in the book. That would be awesome.

FS: [laughs] That would be hilarious. So, what was the impetus for creating The Goddamned? Was the story of Cain something you’ve always been interested in?

JA: Yeah, it kinda has. I grew up in the south, so I grew up with a southern Baptist church and the stories of the Bible. So a book like this was one that I’ve been sitting on for years. I pitched it to Vertigo Comics years ago when I was first pitching [the comic book] Scalped. That was 2004 or ’05. It was something that I’ve been working on for a while that I’ve had on the backburner over the years.

Some stuff has changed, but the core of it has remained the same. I’ve always like the idea of doing a darker take on the stories of the Bible, especially the stories from the book of Genesis. I was always fascinated by the idea of the world before the Floods. The idea that the world was so new and humanity was so new, but humanity had gotten so completely out of control with murder and violence to the point where God was just going to commit genocide and start all over again. That, to me, seemed like a really rich setting for the kind of stories I like to do.

FS: It’s funny that you talk about fleshing that out because, if you look at Genesis, it’s pretty cut-and-dry about what happened to Cain after he murdered Abel. Growing up in a southern Baptist area myself, the story on the page feels removed and alien. How you characterize the story makes it feel more immediate.

JA: Sure. If you look at the story on the page, the story in the Bible is really sparse. I wanted to dive into that world and wallow in it and get to know those characters. This first arc is very much about Cain and Noah, characters we know from the Bible and we all know their stories, but we’ve never heard the stories quite like this before. 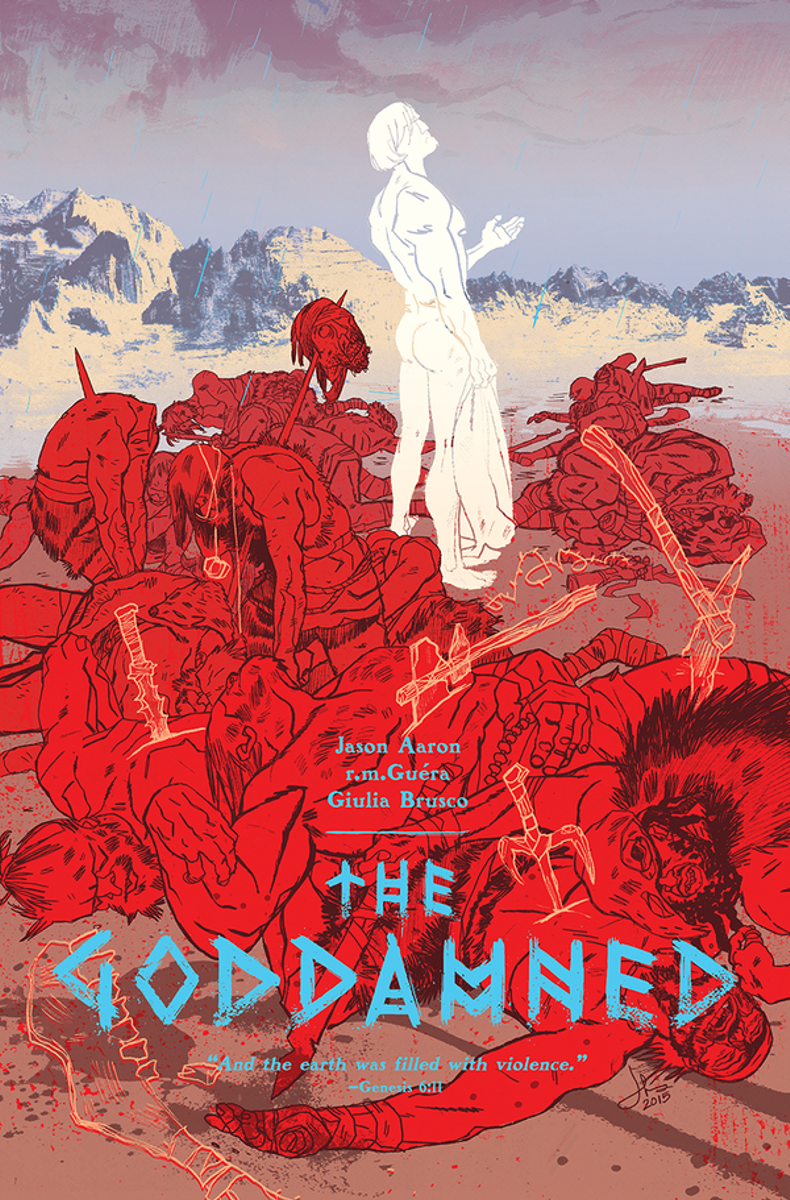 FS: Is the through-character in the book going to be Cain, or does that reference to the “goddamned” have a broader focus? Are you going to be focusing on other main characters from the Bible?

JA: Oh yeah, absolutely. The book is really about the world itself, the world before the Flood. We’ll meet a lot of characters beyond the ones we meet in this arc. That’s not to say we won’t see those same characters again. Arc to arc, we’ll mix it up. I’ve always said it’s like [writer] Ed Brubaker’s Criminal, different stories all set in the same world. You can read them independently of one another. If you read them all, you will see how the stories connect together and how characters reoccur. The door is wide open with what characters we can deal with and what stories we can do.

FS: You’ve collaborated with r.m. Guera before on Scalped and this book shows how well you work with one another. What were your conversations like about deciding how the series should feel?

JA: I kinda knew what Guera could do this, having known him for some long and what he’s capable of. He’s drawn pretty much everything at this point. People here pretty much know him from his work with me on Scalped, but he’s done stuff in Europe before that, so he’s drawn a little bit of everything. I knew he’d be the perfect guy for this.

When we started talking about it, though, we were mainly talking about caveman stories. I loved those old caveman comics that we don’t really get anymore, like Joe Kubert’s Tor and the kind of comics where you’d have guys dressed in fur, wielding sharpened sticks and fighting dinosaurs. I loved those books. It very much began with me wanting to do a book like that in a bit different way. At its heart, The Goddamned is really a dark and bloody caveman story.

FS: And I felt that while reading the book. I saw some Man with No Name, some noir, some Kurosawa. The book very much felt like a blending of those genres.

FS: How do you approach the character of Cain in your writing? We know him for committing the first murder, according to biblical lore. As I read it, even though he cuts a path of carnage in his wake, he’s likeable at times and even seems somewhat remorseful. How do you make Cain likeable for yourself to write?

JA: I always love writing flawed characters. He certainly fits the bill. He’s one of the original flawed characters, right? He commits this spontaneous murder in a moment of anger and dooms humanity because of it, at least that’s how he sees it. And, of course, his curse is that he’s forced to wander around and watch this happen again and again. He can’t die. He has to watch the world go to Hell around him. There’s a tragedy there and a character who wrestles with his own deep flaw. That’s the kind of stuff I can really dig my teeth into.

He’s certainly the most reluctant of heroes I’ve ever written. In that first issue, you don’t get anything like a heroic arc. Hopefully, he’s a person you want to spend time with and come back for more. But he has a moment to be a good guy when a kid asks for help and asks to come with him. Cain tells him no and walks on. [laughs] Still not a good guy in some sense. Issue 2 is a big part of the puzzle, too, in that it sets the stage for where things are going the rest of this arc. We’ll see if there’s still some good guy left in Cain, if he has a chance to play the hero.

FS: You mentioned that Cain felt responsible for the state of the world. Does he feel like his first murder caused a ripple effect that caused anguish that might not have occurred otherwise?

JA: He certainly feels like a big part of the problem. We’ll see a little bit more about those early days post-Eden as we go forward. Clearly, though, it’s not all his fault, if you know the story. Before he came along, his parents had already been cast out of Paradise. But as we’ll see, even then, they still had a pretty good gig, right? They had a world to themselves that was fresh and unspoiled. Then we jump ahead just 1600 years and we see what we’re left with. Everything is spoiled. So, yeah, he still feels like he was a big part of that happening, accelerating the ruin of the planet and humanity itself.

FS: Speaking of the ruin, there’s a lot of violence in the book, but I never felt it to be gratuitous. There’s a lot of violence in Genesis, but it often felt hollow in the reading. You and Guera did a great job showing how depraved humanity had become to the point that Yahweh would make the decision that he did. In how you told the tale, it felt more immediate and believable to me.

JA: Thanks. Again, it’s an End of the World story. I was thinking about The Road Warrior, I was thinking about Cormac McCarthy’s The Road. It’s that kind of world. The twist, of course, is that it didn’t take nuclear war to get there. It just took 1600 years of man being man. One of the quotes from the Bible we use from Genesis was “the earth was filled with violence.” That’s pretty cut-and-dry. That’s exactly the world we’re trying to show.

I thought it was important to do the big opening fight scene that we had that goes on for eight pages or so, of just wordless violence. No narration, no dialogue, nothing. Just Cain fighting his way through a group of guys, gathering his weapons. I think that fight scene reveals a lot about him, how he’s different from the people around him, what this world is like, and what he’s been up to these last 1600 years.

FS: Are there any hints that you can tease about issue 2?

JA: We get a better look at Noah. We only get a glimpse of him at the end of issue 1. We get a better idea of what he’s like and what he’s up to. We all know the story about how he built his ark, but this is bit of a different take on how he went to accomplishing that. We spend some time with him. Then we go back to Cain. He crosses paths with a new character and that meeting sets the course for where things are headed the rest of the arc.

The Goddamned #1, written by Jason Aaron with r.m. Guera on art, is now in comic book stores. You can read our 10/10 review here! Issue 2 will hit shops December 16.