With the holidays blowing in through department stores and our hearts, it’s easy to become overwhelmed with seasonal cheer and the jingle-jangling of upbeat lyrics full of calls for celebration. Thanksgiving, Christmas, and every holiday in between aren’t necessarily bounding with ebullience for everyone, something of which Charles Dickens seemed keenly aware. Looking at A Christmas Carol, one of his seminal works, Dickens acknowledges through his characters that everyone—from the most curmudgeonly to the relentlessly optimistic—can be impacted by the emotional mixed bag that the holidays can be.

Artist Harvey Kurtzman seemed to know this truth as well, as he set out to adapt Dickens’ tale in Marley’s Ghost, out now from comiXology and Kitchen, Lind & Assoicates. Best known for his work in MAD Magazine and Playboy, Kurtzman looked to emphasize the supernatural aspects of Dickens’ story, something that hasn’t always come to the fore in other adaptations.

Although Kurtzman never had the opportunity to fulfill his vision, artist Gideon Kendall and writers Josh O’Neill and Shannon Wheeler combined their efforts to make the project a reality, using Kurtzman’s breakdowns and notes to expand on the groundwork he laid. The result is a haunting yet uplifting spin on A Christmas Carol that’s a seamless work from various creators separated by decades.

Mr. O’Neill spoke with me recently about his involvement on the project, why he feels Kurtzman was drawn to the Dickens classic, and how Kurtzman’s work impacted his own storytelling sensibilities. 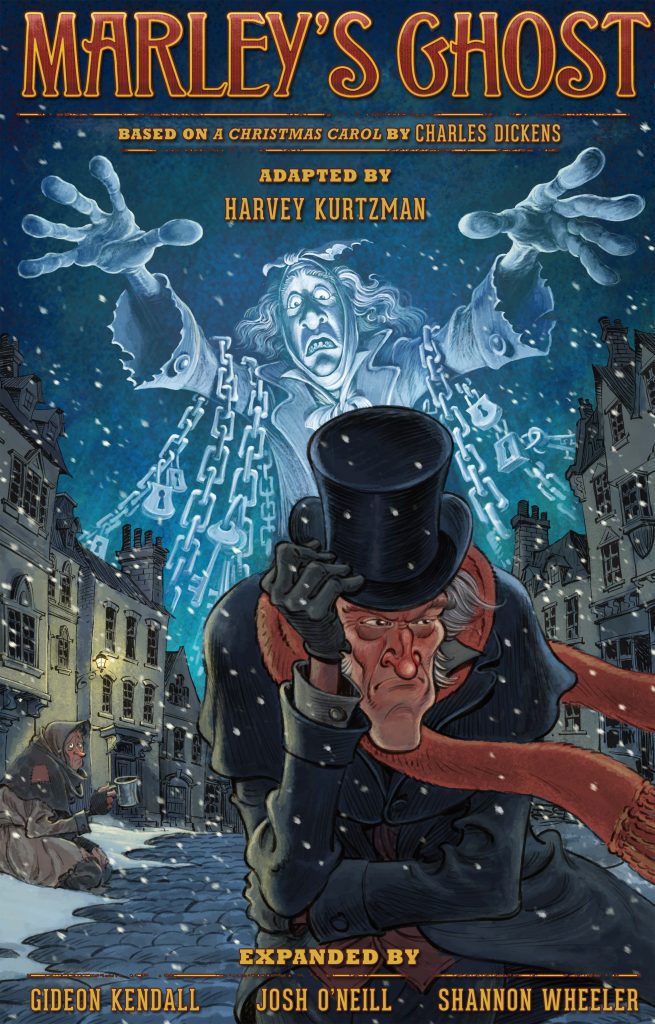 FreakSugar: I adored this adaptation of A Christmas Carol. How did you become involved in adapting it for Marley’s Ghost?

Josh O’Neill: I’m so glad you liked it! It was such a pleasure and privilege to work on it.

This project was in the works for a long time — Denis Kitchen at Kitchen Sink and Chip Mosher at ComiXology had, I think, been hatching this plan for years. Denis is a good friend and somewhat of a mentor to me, and suggested that I come on board as a writer/editor to help get the project moving. I suggested my pal and frequent collaborator Gideon Kendall as the artist, which is by far my largest contribution to the book. I don’t think there’s an artist in the world better suited to adapting this material than Gideon turned out to be. 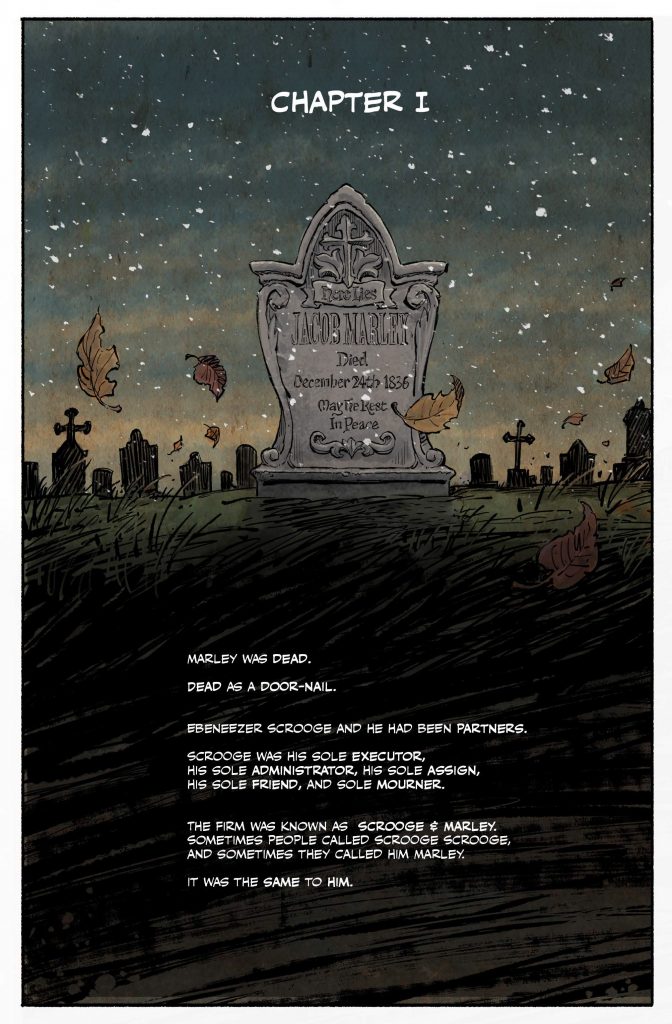 FS: Prior to your involvement in the adaptation, had you been a fan of either Harvey Kurtzman or Dickens’ classic? What are your earliest memories of either?

JON: Of course, we all grow up with A Christmas Carol. I’m sure I saw dozens if not hundreds of versions of it growing up; retold through the Muppets or Mr. Magoo or the countless cinematic takes. I even played Scrooge, in a middle school performance of the play.

I love Dickens. I think he’s one of the truly great voices of English prose. The sort of verbose, bardic gather-round-the-fireside tone of his writing is just endlessly compelling. The challenge of infusing that kind of musical language into a visual storytelling format was an interesting one.

Kurtzman I first discovered in a stack of old MAD magazines I picked up at a yard sale when I was around 12 years old. I loved the material even then, but I don’t think I wrapped my head around exactly who he was until high school, when I was starting to try to understand the lineage of my favorite cartoonists. All of American satire was borne out of Kurtzman’s pen. And the nimble, joyous slickness of his storytelling remains unmatched all these years later. His comics never stop moving.

Kurtzman was a minimalist and Dickens was a bit of a maximalist, but they both understood deep in their bones how to turn a page into pure music. That’s the common thread we tried to hold on to in our adaptation. 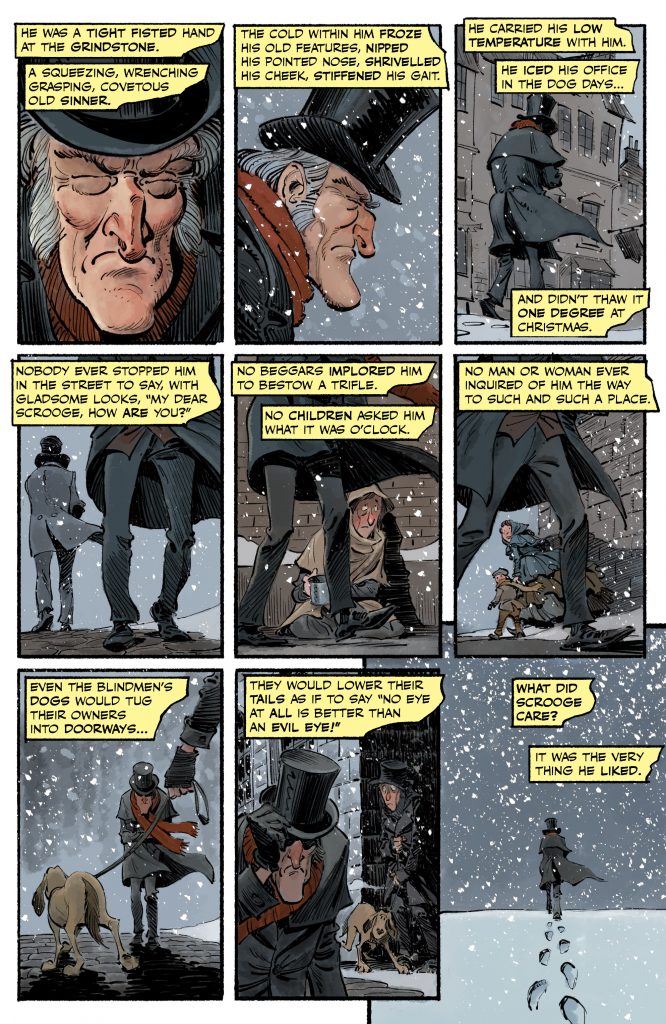 FS: While I know Kurtzman had done a good deal of the work on the adaptation before it landed with you, how do you adapt a story like A Christmas Carol that has seen so many iterations over the years and give it new holiday sparkle?

JON: Kurtzman seemed to be emphasizing the ghost-story aspect of Dickens’ classic, an element that I think is for some reason underplayed in many of the adaptations. This is a spooky supernatural story with some elements of horror at its edges. There’s also a deep sadness to it, an elegy for all of Scrooge’s missed chances for a happier life. A Christmas Carol has a (spoiler alert) happy ending, but it doesn’t flinch from darkness. In their eagerness to make cheery holiday fare, most adaptations sand off these rough edges. We’ve tried to restore them. 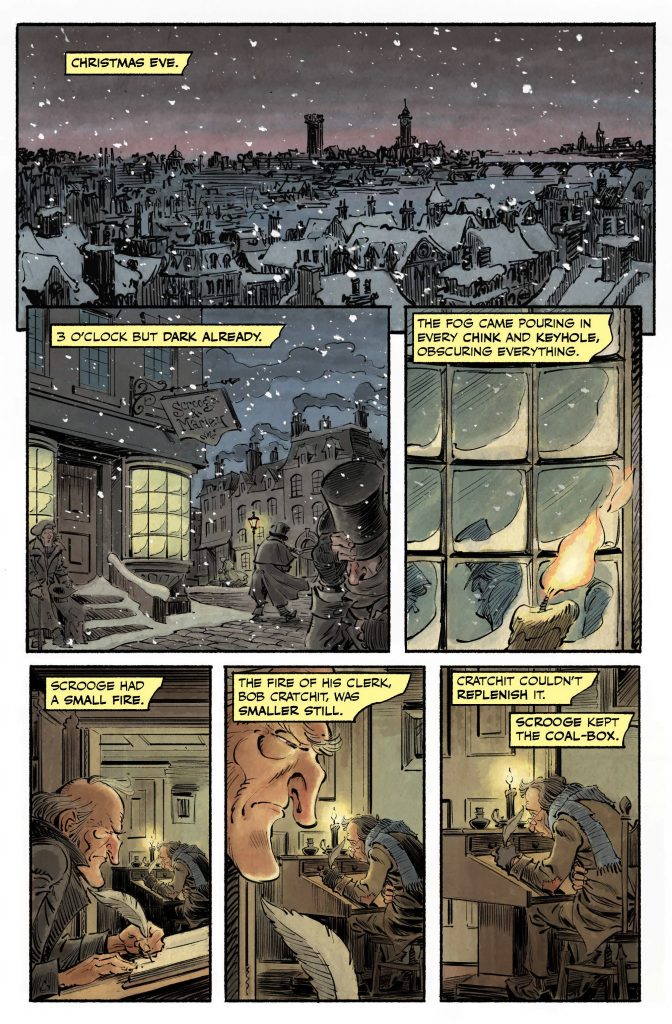 FS: Following up on that, I know that you, Shannon, and Gideon wanted to stay true to Kurtzman’s vision, but do you also let your style come through so you’re honoring his work, but not seeming as if you’re trying to duplicate it?

JON: You have to. None of us are Kurtzman or Dickens, and if we tried to do a karaoke version of their comic, it would come off as B-grade rehashing. Our purpose here was to take this grand vision, hatched by one of the masters of cartooning, and bring it to fruition ourselves. Gideon has an unmistakable and truly compelling voice as a cartoonist, and to try to smother that would be not just a crime, but an impossibility. We tried to take Kurtzman’s ideas and plans and make something new and wonderful out of them. 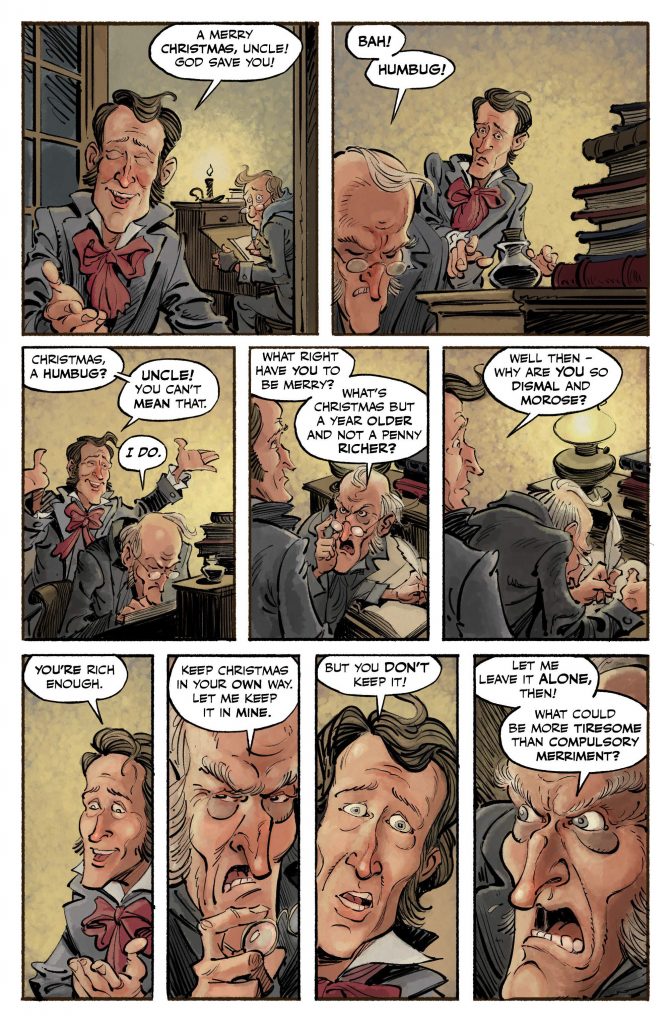 FS: Kurtzman is known for his work in MAD and in Playboy. Why do you think the story of A Christmas Carol appealed to him to such a degree that he wanted to adapt it into a graphic novel?

JON: I suspect he wanted to restore some of the darkness the films scrubbed off. The best Christmas stories are never relentlessly positive. They’re too kind and big-hearted for that. You have to allow the sadness in. Kurtzman and Dickens are above all else such warm, humane storytellers. They have sympathy for Scrooge without denying his monstrousness. Not everyone who has adapted this story has always shown the same generosity of spirit.

FS: As a creator, what Kurtzman’s impact on your own work and storytelling sensibilities? Do you feel his mark in your approach to your writing?

JON: There are a thousand lessons you can take from Kurtzman, but I treasure two in particular. The first is about economy of storytelling. Kurtzman never elaborated more than he needed to. He never created an indulgent line of dialog or an extra panel. His stories leap to life on the page, and sweep you along as quick as your eye can absorb them. They never carry extra luggage. I always try, in honor of Harvey, to ask myself “How little do you need to tell this story?” Can you do it in fewer panels? Fewer pages? Fewer words? Don’t waste your reader’s time, don’t show off.

The other lesson I take is sort of the yin to that unflinching editorial yang. Kurtzman’s work is JOYOUS. It’s overflowing with life and energy and storytelling verve. It’s never dutiful, plodding, or workmanlike. It’s bubbling and alive. It reminds you to seek what you love about the story you’re telling, and let that love find its way onto the page. Even the hardest working storyteller should always be animated by a sense of play. I always search for ways to keep myself in that place.

Marley’s Ghost, an adaptation of Charles Dickens’ A Christmas Carol by Harvey Kurtzman, Gideon Kendall, Josh O’Neill, and Shannon Wheeler, is on sale now from comiXology.

In the 1950s, legendary comics creator Harvey Kurtzman had plans to adapt Charles Dickens’s classic story A Christmas Carol into what would become known as a graphic novel. However, the project was never brought to fruition and the pages, thumbnails, and notes that Kurtzman had created remained unfinished. Artist Gideon Kendall and writers Josh O’Neill and Shannon Wheeler– under the supervision of the Kurtzman Estate and book packagers Kitchen, Lind & Associates – teamed up to finish Kurtzman’s dream project for comiXology. Harvey Kurtzman’s Marley’s Ghost adapts and expands upon Kurtzman’s extensive breakdowns and notes to make his long-lost vision a reality.

“With Harvey Kurtzman’s Marley’s Ghost, families everywhere can enjoy this retelling of a holiday favorite, while comic aficionados will marvel at this now completed Kurtzman work.” said Chip Mosher, comiXology’s Head of Content & Senior Director of Communications. “Marley’s Ghost is a one-of-a-kind collaboration between some of the greatest creative talents of any time. Once you dive in, you’ll be hit by the tour-de-force storytelling of Josh O’Neill and Shannon Wheeler, along with Gideon Kendall’s finishes on Kurtzman’s roughs that delivers Dickens’s A Christmas Carol for audiences today.”

ComiXology Originals offers customers a unique line up of digital titles that are available exclusively for comiXology and Kindle customers.

ComiXology Unlimited offers over 10,000 comics, graphic novels and manga for just $5.99 a month with a 30-day free trial at comixology.com/unlimited and is available on the comiXology app for Fire Tablet, Android, iOS and on the web at comixology.com.

Kindle Unlimited offers over 1 million titles, thousands of audiobooks, and select current issues of popular magazines for just $9.99 a month with a 30-day free trial at amazon.com/kindleunlimited.