All hail the Dark Lord, exult his almighty name! If you, like me, think that your heroic action figures—your He-Man, your Optimus Prime, your Spider-Man—are becoming huge sissies for lack of real, competent, credible threats– then fret no more! Cthulhu, the Dark Lord of All, Praise Be His Reign On Earth, is coming to toy aisles and comic book stores—and it’s happening with your help, his devoted viceroys of the realm.

Mercifully to all who welcome Cthulhu’s coming blight on humanity, WARPO toys has launched a Kickstarter campaign to mass produce their very own action figure line, LEGENDS OF CTHULHU, based on the works of H. P. Lovecraft. 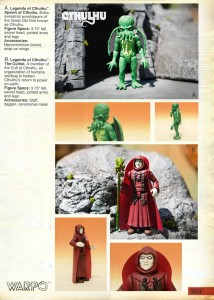 The Kickstarter, which has already almost doubled its campaign goal of $60,000, hopes to mass produce action figures inspired by Lovecraft’s works. Characters in the line include The Professor, a foil of Cthulhu; Spawn of Cthulhu; The Cultist, a follower of the Dark Deity; and The Deep One, an undersea creature who serves only Cthulhu. As the campaign has exceeded its monetary mark, it created “stretch goals” for other characters to be added in the line, including The Author, Lovecraft himself; and The High Priest.

The passion the creators of LEGENDS OF CTHULHU have for the characters and the toy medium gushes out of the campaign video. They mention that they were fans of roleplaying adventures and toys during their formative years and that Cthulhu and action figures seemed like a perfect fit. (I totally believe that Lord Cthulhu, He Who Watches Us All, had no hand in planting suggestions in their minds to make this a dream a reality.) 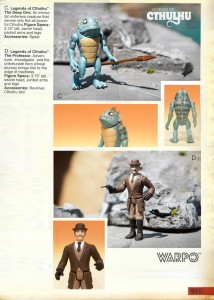 The figures have the look of being pulled right out of the 1980s, and with good reason. Working with Eddy Mosqueda of the Masters of the Universe and Teenage Mutant Ninja Turtles toylines, the creators designed the LEGENDS OF CTHULHU action figures to have the feel as if they were pulled straight from that time period. Each action figure is 3.75” and feature beautiful blister pack art from the talented Ken Kelly.

What I found most impressive about WARPO’s Kickstarter campaign is how seriously the company has taken the launch of the action figure line. The launch video itself is painstaking in how it details the production process and why certain aesthetic choices were made. In addition, the three entrepreneurs representing WARPO in the video demonstrate that they understand the business side of the Kickstarter, specifying the steps it has taken to get the figures on the production floor. The campaign page provides numerous pictures showing how the characters start on the drawing board and end up a three-dimensional reality. They add street cred to their endeavor by showing the sculptors and illustrators they enlisted to bring the cast of LEGENDS OF CTHULHU into your hands.

Although WARPO has met its campaign goal, you can still get in on the action and contribute for the next five days. If you follow the teaching of His Great Cleanser of Worlds, you might be able to write off the contribution as a religious donation.