Superman, the Man of Steel and super hero who debuted in Action Comics #1 in 1938, has endured for over eight decades, changing with the times and cultural norms, but always retaining his core beliefs and essence of who he is: a good person who strives to do right be his loved ones and the population of Earth. However, as much as the Man of Tomorrow struggles to do good, there are always questions about how the world should be protected. What is in his power? What is his responsibility?

That conceit and those questions are at the heart of Superman: Space Age, a new DC Comics miniseries debuting this summer from the creative team of writer Mark Russell (Fantastic Four: Life Story, The Flinstones) and Mike and Laura Allred (Bowie: Stardust, Silver Surfer). Set out of normal DC Comics continuity and focusing on the “Space Age” of our world, Superman of that universe and his presence makes the history we know unfurl in a different way. As the Man of Steel passes through the 1960s, 1970s, and 1980s, his worry for his adopted Earth grows with every impending danger. Can he save a world that is determined not to be saved, as its own people stymies its own self interests time and time again? How does Clark Kent reconcile his fear, his morality, his sense of self, and his sense of duty?

We spoke with Mr. Russell recently about the idea behind Superman: Space Age, injecting Superman into history, working with the Allreds on the story, and the secret to the Man of Steel’s longevity.

FreakSugar: For folks reading this interview, what is the conceit of Superman: Space Age?

Mark Russell: It tells the story of Superman and his world in the 1960s, 1970s, and 1980s, during what we casually refer to as “The Space Age”. Though, it should be noted, this is the story of the Superman in a different universe, so their history in those decades unfolds a little differently than ours. And the story of the characters we’re familiar with unfolds a little differently as well. Is that a spoiler? Maybe. But then, we identify this as being a particular universe on the very first panel of the very first page, so I’m not spoiling much.

FS: How did you become involved with the book? Was there a particular idea that popped in your head that you just had to pitch to DC?

MR: I had been approached by DC years ago to write a sort of “Superman as historical fiction” series. The conceit then was going to be that it started in 1965 with the creation of the Justice League and that each issue would be one year in the history of the Earth, or some universe’s Earth, and that it would run for twenty issues until ending in 1985 and the events of the Crisis on Infinite Earths series. But with all the shake-up at DC and the pandemic, that idea just sort of got tossed at sea for little bit and this series is the seaworthy ship that made it through the storm. 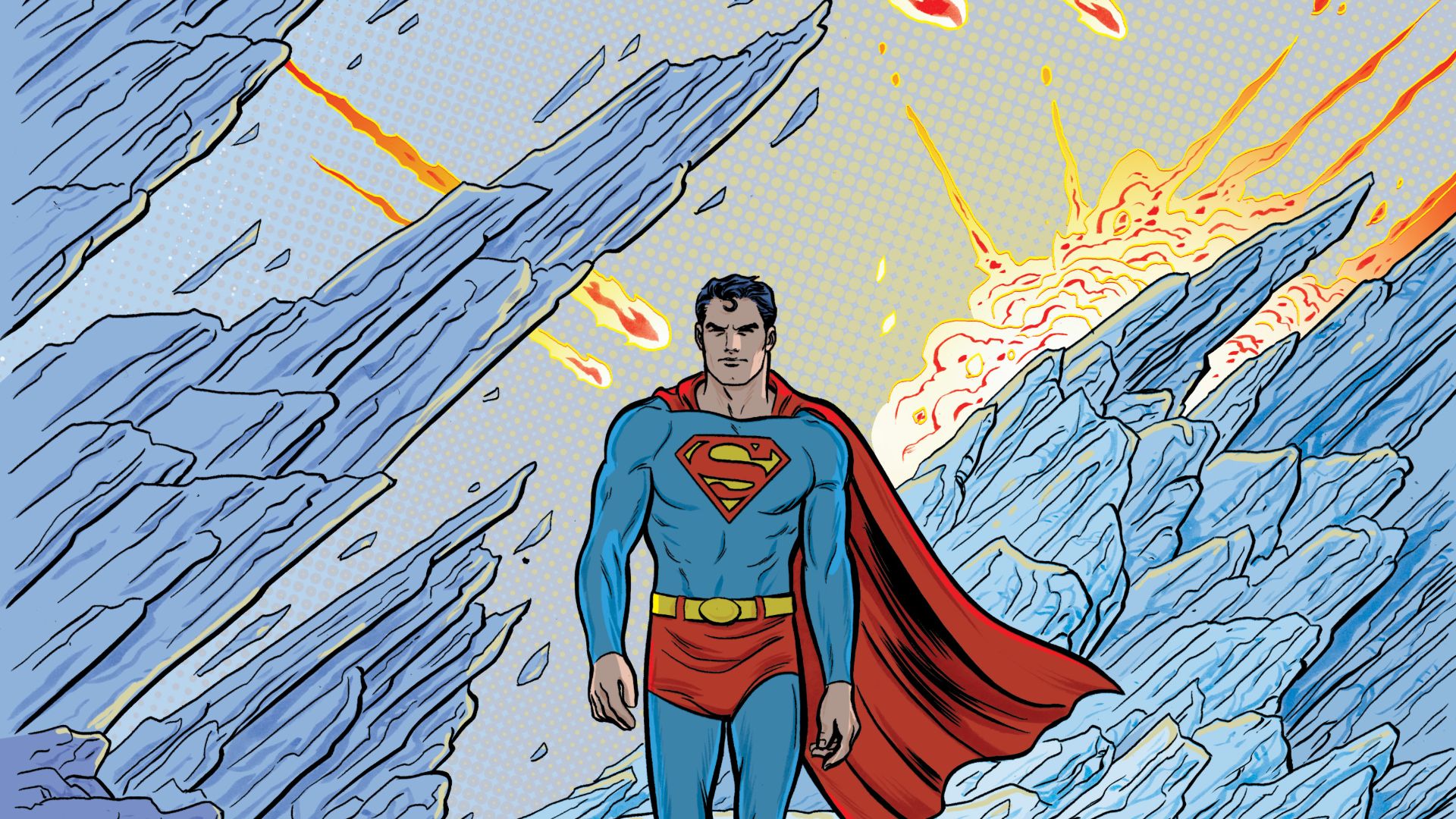 FS: The Allreds are just absolutely brilliant. How did they become involved with the book?

MR: When we got the greenlight for this series, Brittany Holzherr (the series editor) told me to dreamcast the artist. To make a list of artists who I thought would be right for this series and to pretend as though I could get absolutely anyone I wanted. She did the same. And Mike Allred was the one name that was on both our lists. So it still seems like something of a miracle to me that we were able to get both him and Laura onboard.

FS: Every collaboration between writers and artists are different. What is the dynamic between you and the Allreds? Do you tailor what you write, in part, to match their skills, styles, and sensibilities to storytelling?

MR: At first, I just started scripting the story like I would any other. But then he started sending pages back to me and his artwork was just so striking and otherworldly, in other words, exactly what we were hoping for. So it changed the way I wrote. I went back through the pages I’d already scripted and got rid of any panels I could so we could just marinate in whatever artwork remained. Also, this is a story that starts out kind of small and colloquial, with him as a frustrated teenager in 1960s Smallville, but the scope becomes grander and more cosmic as the story progresses, so I feel like it’s a story that plays to Mike’s strengths and one which expands itself into getting the full Allred experience.

FS: You’ll have the entire Superman cast to work with in this series. Who has been your favorite to write so far?

MR: Whenever I write a Superman story, my two favorite supporting characters are usually Lois Lane and Lex Luthor, whom I see as kind of the two polar opposites of the Superman moral universe. And it’s always just more fun, and more of a challenge, to write characters who are supposed to be smart and witty. One thing that surprised me as I was writing this series, though, was how much I enjoyed writing Jonathan and Martha Kent. Writing them it became clear to me that this was going to be as much a story about all the people in Superman’s life and how they saved him, as much as it was about Superman saving anyone else.

FS: Are there any special considerations you take when tackling a character like Superman? Not only is he one of DC’s flagship characters and one its oldest, but I’ve talked to other writers who say that he’s sometimes a tough nut to crack. Do you encounter of those issues and, if so, how do you work through them?

MR: I think I like writing Superman for the same reasons that people find him corny or difficult to get into. To me, the essential question that Superman asks is, “What would this world be like if we chose to be our best selves?” Which I’ve always found to be a moving thought experiment because so much of the world is out of our control, and would be, even if we were to possess superpowers. But it’s the question that animates, not only our personal growth, but ultimately our positive impact on the world, whatever our power set.

FS: In that same vein, Superman is a character who has been imagined and re-imagined in so many ways in his eight+ decades of being in pop culture. What is your take on Superman? Who is he at his core and, beyond his longevity, why is he important?

MR: I think, at essence, Superman is the sum of everyone who ever loved him. And, just as Jonathan and Martha took him in and added him to the human family at a moment when he was vulnerable and discarded, this is what he seeks to do for others. To protect the vulnerable. To find and help those who are not being valued as full members of the human family. Because that was the essential act of kindness which made him who he is.

FS: If you had one final elevator pitch for potential readers, what would it be?

MR: Did I mention that Mike Allred was doing the art?

Superman: Space Age #1-3 debut on July 26th, 2022 from DC Comics. A new issue will be released thereafter every two months.

Meet  Clark  Kent,  a  young  reporter  who  just  learned  that  the  world  will  soon  come  to  an  end  (Crisis  on  Infinite Earths) and there is nothing he can do to save it. Sounds like a job for his alter ego…Superman! Superman: Space Age from critically acclaimed writer Mark Russell (One-Star  Squadron and The Flintstones) and Eisner-winner artist Mike Allred (Silver Surfer and Bowie: Stardust, Rayguns & Moonage Daydreams) will be available in comic shops on July 26, 2022.

“This is a dream project for me,” said Mark Russell. “Not only because I get to work with a genius like Mike Allred, but because I’ve always found Superman such a philosophically fascinating character, one which forces us to ask how different would the world be if we chose to be our best selves?”

After years of standing idle, the young man from Krypton defies the wishes of his fathers to come out to the world as the first superhero of the Space Age. As each decade passes and each new danger emerges, he wonders if this is the one that will kill him and everyone he loves. Superman realizes that even good intentions are not without their backlash as the world around him transforms into a place as determined to destroy itself as he is to save it.

“SUPER pumped to finally reveal what we’ve been working on in secret for so long,” said Mike Allred.  “Easily my biggest project for DC yet. Working with Mark Russell and his brilliant script has been a blast!  Packed with head-spinning iconography, top tier characters, twists, thrills, and chills, resulting in a powerful instant classic epic! It’s been simultaneously intimidating and inspiring to meet the challenge of illustrating this phenomenal project!