Now is a wonderful time to be a fan of author Neil Gaiman’s acclaimed novel American Gods. Not only is a TV series being adapted from the book by the Starz Network, premiering April 30, but Dark Horse Comics is also ushering out a gorgeous adaptation of the story. This Wednesday, American Gods: Shadows #1, written by P. Craig Russell with Scott Hampton on art, hits newsstands, recounting in four-color form the clash between old gods and new for the hearts and minds of the 21st century.

Mr. Russell spoke with me recently about adapting American Gods to comic book form, the decisions he had to make the switch from novel to comic work well, and his collaboration with Mr. Hampton in breathing air into the story’s world and characters. 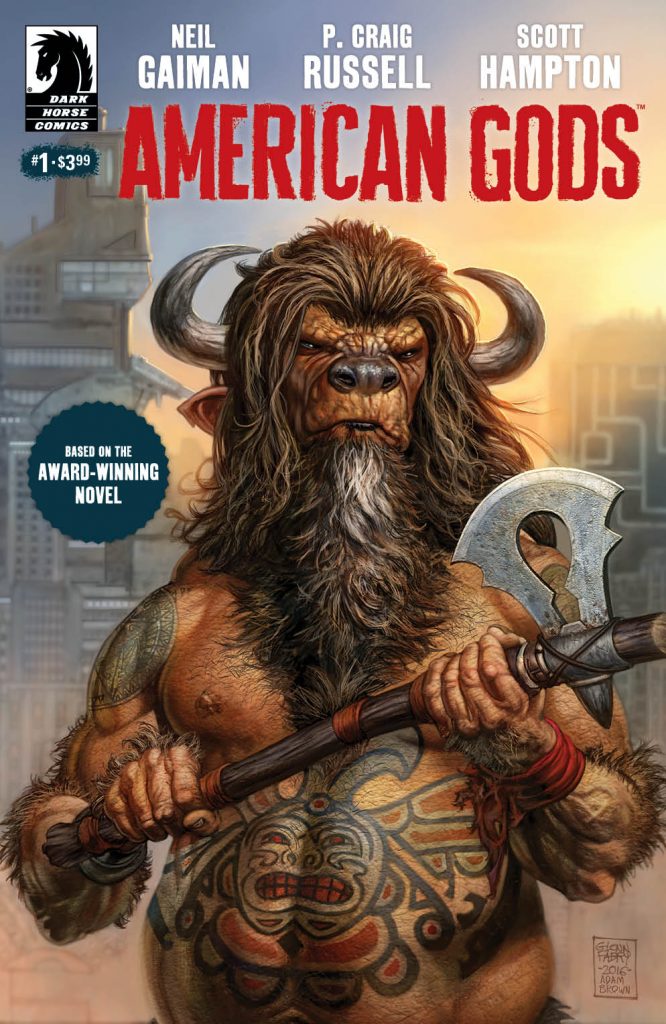 FreakSugar: For folks who might not be familiar with Neil Gaiman’s original story, how would describe American Gods?

P. Craig Russell: As a cosmic clash between thegodsof the old world (Odin, etc.) and the gods of the new (the internet, iPhones, etc.) set against a very sly and telling look at the backroads and off-the-grid characters that define and populate so much of America. 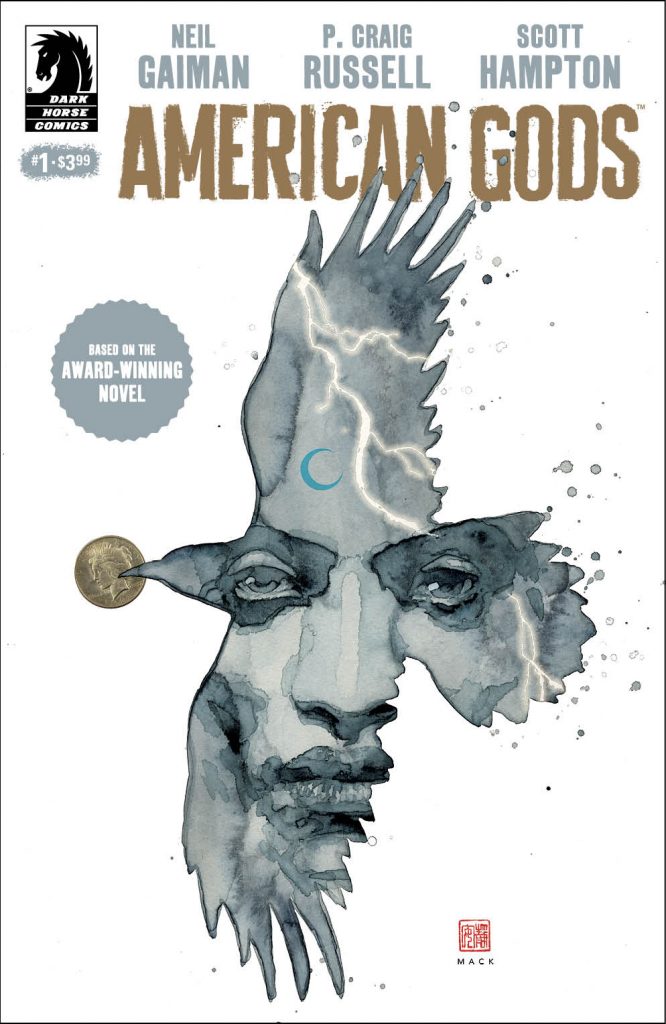 FS: How did you become involved with adapting American Gods to comic book form?

PCR: Basically I was asked, “Would you like or be available to adapt American Gods into graphic novel form?” As I had read the novel when it first came out it was an easy answer. Why, yes I would.

FS: Where do we find Shadow, the book’s protagonist, at the beginning of the first issue of American Gods: Shadows?

PCR: Our first view of Shadow on page one is a close-up of his face looking out the tiny window of his cell door in prison. I originally envisioned it as bars on a cell but realized in a modern prison it would be a metal door, which actually makes him look even more imprisoned. 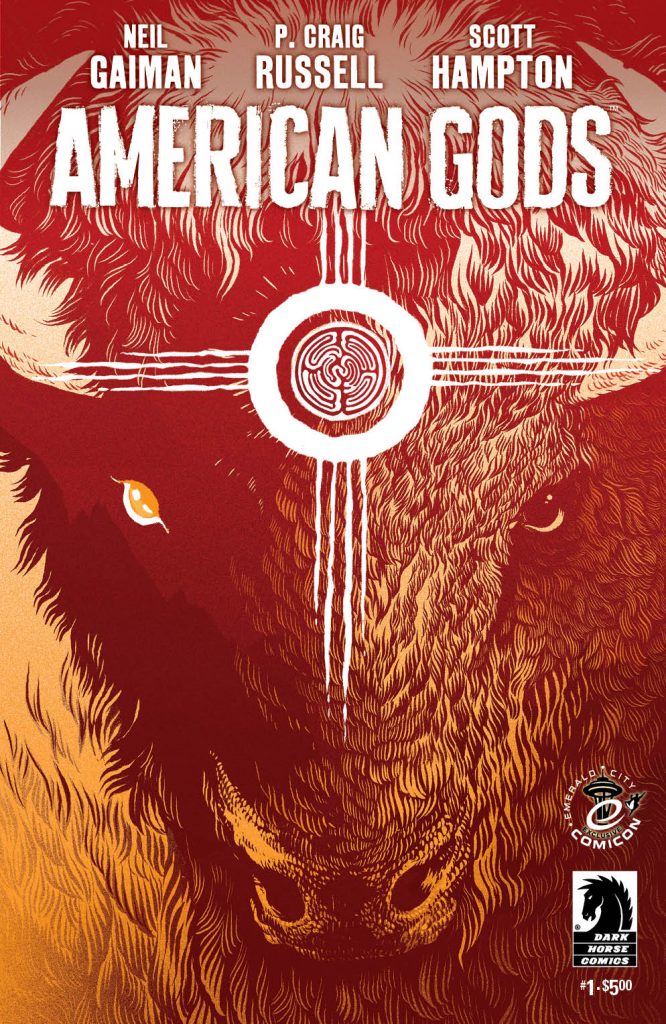 FS: Adapting stories from one media to another comes with flexing different skillsets. What kinds of things did adapting the story of American Gods to comic book form allow you to do that the novel may have not been able to do, given the medium?

PCR: The aspect of adaptation I’ve always found most challenging, and when it works out, most rewarding, are those elements which are, in the prose, least amenable to visualizing. By that I mean conversations between characters and finding a way of staging the scene to reveal emotional dynamics or power relationships in such a way as to avoid the dreaded ‘talking heads’ approach, at least any more than necessary. That, and finding the proper pictures to use when the author is describing the characters feelings such as when Shadow is alone in a motel room grieving for his late wife. In that case, since most motels have twin beds, I focused the layout/visual on the empty bed beside him. I’m always looking for any prop in a scene that can be used to illuminate or comment on a character’s state of mind. 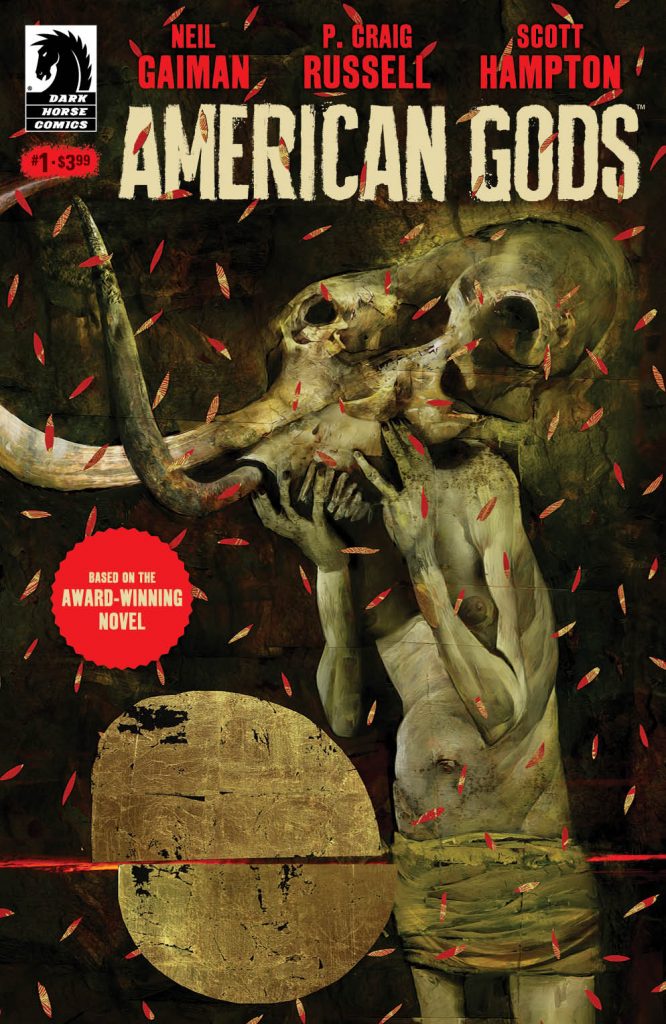 FS: Did you and Neil Gaiman speak about his thoughts about adapting the story?

PCR: No extended conversation about the book, but Neil is always available to answer any questions I have about the text as I go along with scripting it.

FS: I imagine that adapting a novel to comic book form involves some editing—deciding what to keep and what to cut, with those edits not compromising the story. Were there scenes or beats that you wanted to make absolutely certain didn’t end up on the cutting room floor?

PCR: Of course a scripter has to be aware of maintaining strong narrative line, which needs to be sustained while doing a tremendous amount of cutting and simultaneously staying aware of the unique flavor of the author’s writing. There’s a lot of sly humor in Neil’s book and I try to keep that in as much as possible. You have to keep your eye on the narrative goal while not jettisoning so much of the side trips that make the journey so enjoyable.

FS: Scott Hampton’s work on the first issue is gorgeous. What was the collaboration process like to try to decide what you both wanted the look and the feel of the book to be?

PCR: There has been a bit of back and forth on character design but that’s mostly been between Scott, Neil, and editor Daniel Chabon. Scott did consult with me about a dark dream sequence in which I designed as an increasingly chaotic maelstrom of gods. Scott envisioned a much quieter sense of increasing dread to the nightmare. As both approaches worked I agreed. Any artist is going to do their best work if it’s something they’re excited about and as an artist myself I don’t want to micro-manage another. That’s never fun for either party.

Shadow Moon just got out of jail, only to discover his wife is dead. Defeated, broke, and uncertain as to where to go from here, he meets the mysterious Mr. Wednesday, who employs him to serve as his bodyguard—thrusting Shadow into a deadly world of the supernatural, where ghosts of the past come back from the dead, and a brewing war between old and new gods hits a boiling point.

The Hugo, Bram Stoker, Locus, World Fantasy, and Nebula award–winning novel and upcoming Starz television series by Neil Gaiman is adapted as a comic series for the first time!