“Bitch Planet #1 ain’t subtle, but it’s not intended to be. It’s not merely social commentary attached to a bare bones story, but instead does what all great social sci-fi sets out to do: It entertains while you’re consuming it and leaves you to digest it for a long time afterward.”

There’s been a ramp-up of press and chatter surrounding the release of writer Kelly Sue DeConnick’s latest comic book work Bitch Planet; Hell, even I kept asking my local comic book shop when it was hitting stands during every other visit. With a title like Bitch Planet, DeConnick doesn’t smack you in the face with subtlety, but as you read the tale, it becomes more and more apparent that’s the point.

And if the title of Bitch Planet #1 didn’t cue you into the mixture of social science fiction and appropriation of exploitation themes found in many films of the 1970s—particularly the “women in prison” trope we see later in the book—the book’s cover alerts you to its message and storytelling sensibilities before you even open the book. The cover feels very much like one of those 1970s exploitation movie posters, write down to the grainy print, with the words “GIRL GANGS CAGED AND ENRAGED” surrounding silhouette’s flipping off an unseen recipient. Even without reading the story or having any clue as to the plot of Bitch Planet, it’s fairly apparent who has earned the woman’s wrath.

While I love science fiction, more and more of what’s being produced in print and on screen is veering away from the social commentary side of storytelling. Whether that’s an intentional move to cater to an increasingly inattentive culture or a side effect of churning out as many products as possible in order to drive up revenue, the fact is that there are fewer Star Treks being made and more Sharknados filling the void. Not that popcorn sci-fi doesn’t have its place, but I’d certainly like some more social dialogue to be coming out of some of my sci-fi. In the moving pictures, Neil Blomkamp, with his films such as Elysium and District 9, makes a good faith effort at throwing in a message with the yarns he spins. DeConnick follows that tradition and makes no apologies that Bitch Planet is a tale of a patriarchy gone (even more) amok.

Sometime in an unspecified future, society is directed by the Council of Fathers, who send non-compliant women to the Auxiliary Compliance Outpost, colloquially referred to as Bitch Planet. Women who are deemed non-compliant are sent off-world to Bitch Planet, as they called a cancer that corrupts the system of the planet, which those in charge refer to as Father Earth. While what constitutes a non-compliant act is never explicitly explained in the first issue, one woman is shipped to the Outpost for daring to become upset at her husband’s infidelity. If that’s the benchmark for what is considered a crime in this future, then it’s clear that female oppression has taken an even more sinister turn. 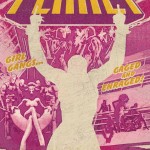 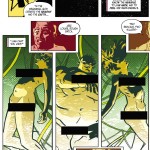 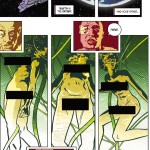 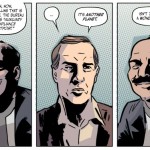 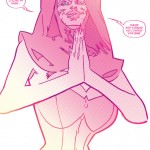 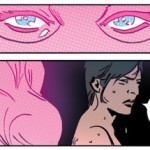 Beyond the incarceration of its inmates, the real mind-fuck that the wardens and guards of Bitch Planet lays on its non-compliant women is the constant reiteration that it’s the prisoners fault that they are they for their actions. Using holograms to serve whatever corrective purpose they need, the masters of the Outpost are constantly attempting to drive this point home. In one scene, the wardens use a hologram of a gross perversion of a nun—again, the type of sexualized nun you’d see in the 1970s exploitation films—to get the inmates to confess their sins.

This is but one way that artist Valentine de Landro utilizes DeConnick’s script to build a world that’s part over-the-top kitsch and part oppressive nightmare. The use of negative space throughout the book—specifically when we are on Bitch Planet—helps to create a claustrophobic atmosphere. And the bubble gum pink holograms peppered throughout the issue serve as a sharp contrast to the drab colors of the prison walls and the inmates’ uniforms.

And of course, a lot has been written about Bitch Planet #1 already, how it uses the “women in prison” trope as a way to reappropriate it and reclaim it from men who have used it to entertain other men, and that’s definitely in there. But the story found in the first issue, while balking at the extremes that the Council of Fathers go to in order to curb “non-compliant” behavior, you’ll probably find yourself reflecting on how far women’s rights and respect for women have progressed and how far we as a society and as a people still have to go. Rapist assholes still sometimes manage to evade jail time on technicalities. Some religions—and yes, even in the good ol’ U. S. of A.—marginalize women to the point that sometimes it makes me wonder if the particular denominations really care if women will attain salvation and paradise. Internet trolls attack women game journalists for daring to have opinions. Maybe you think shipping women to a Bitch Planet is too far-fetched, even for sci-fi, but, really, isn’t that what a lot of men are attempting to do now?

Again, Bitch Planet #1 ain’t subtle, but it’s not intended to be. It’s not merely social commentary attached to a bare bones story, but instead does what all great social sci-fi sets out to do: It entertains while you’re consuming it and leaves you to digest it for a long time afterward. And if it makes you uncomfortable but still leaves you thinking and wanting to read more, then Bitch Planet accomplished its mission.