“Hawkeye #5 gives readers a fun, hardboiled romp while slipping in a treatise about how we rise and fall relative to our insecurities.” 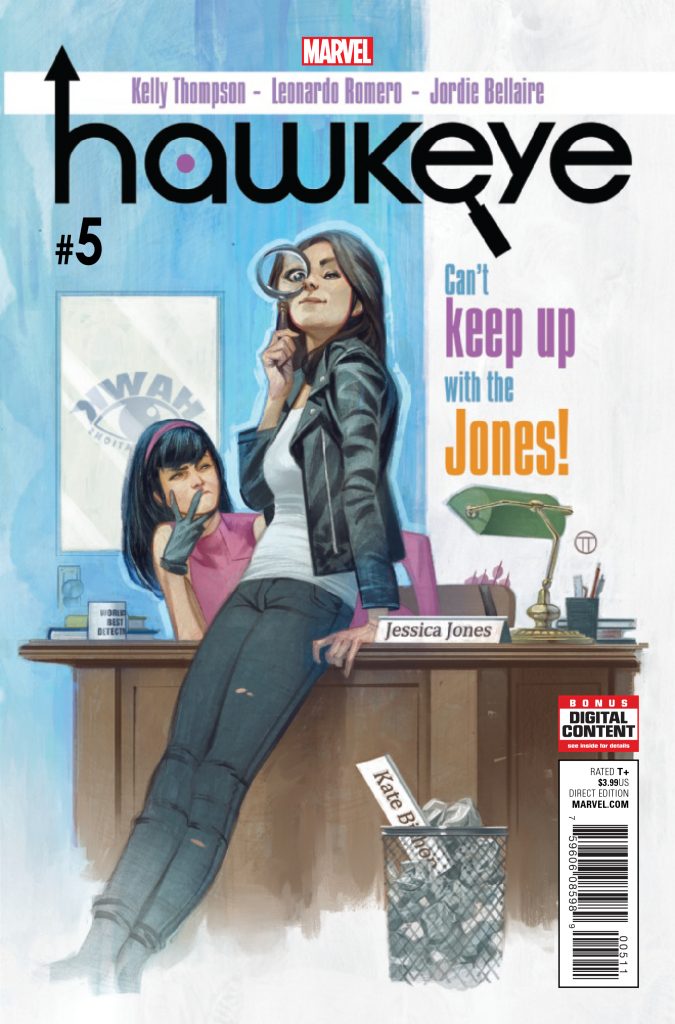 Hawkeye #5 is the second comic of writer Kelly Thompson to hit shelves this month, along with IDW’s Jem and the Holograms #25. As in that Jem book, Thompson explores the topic of insecurity in the most recent issue of Hawkeye and how we either succumb to or rise above it.

Following up on last issue, Kate Bishop, private investigator and the series’ eponymous archer, has teamed up with Jessica Jones, herself a hard-boiled P.I. and occasional superhero. Jessica’s current case has brought her to Kate’s home base of sunny California. What at first appears to be a circumstance of a seemingly missing person starting a new life and adopting a new identity turns into a larger-than-life kerfuffle.

Thompson excels at putting her young characters in situations that challenge their preconceived notions and attitudes toward themselves and others and seeing how they rise or fall to those challenges. Since moving to California, Kate has wrestled with a bevy of insecurities: familial, financial, and vocational. She’s scrambling to find her missing father, while at the same time trying to make rent and navigate her way as a new P.I. Even though she’s no newbie to the superhero world, these make for a mountain’s worth of challenges to scale; no one would fault her for being insecure.

Those feelings of uncertainty manifest most deeply when interacting with Jessica, who, in Kate’s mind, represents the superhero/private eye and what she aspires to be. Throughout the issue, she’s constantly cataloging Jess’ advice on rules of the detective game, which, while they show her eagerness to learn, also belie an insecurity when it seems as though she doesn’t entirely trust herself. As she begins to realize that much of the P.I. business is trial and error, as Jessica tries to impart on her, Kate starts to develop a confidence that allows her to take chances and trust herself a bit more deeply.

As Kate learns to trust herself, we get to witness as she learns what kind of P.I. she wants to be, from mimicking Jessica’s badass, take-no-shit demeanor during an interrogation to deciding how much she time she wants to devote to stakeouts and how much she wants to throw herself head-first into the fray. We’re all Jessica Jones as we watch with parts hopefulness and pride as she comes into her own. And you can’t help but laugh as Kate tries to act all Billy Badass like Jess until she realizes that there’s only one Jessica and only one Kate and that they’re each their own person. 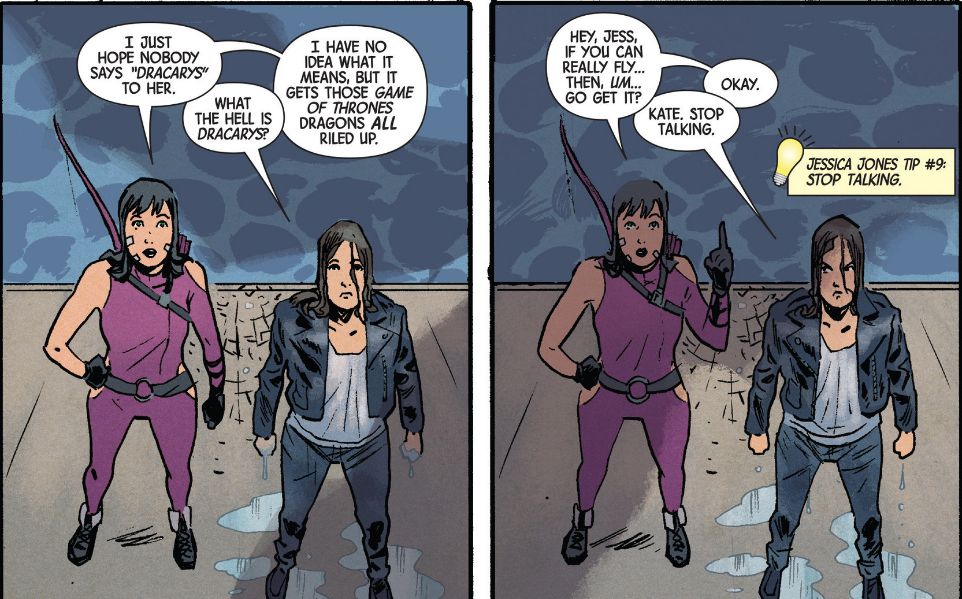 Kate’s insecurity and how she deals with it is mirrored in her and Jessica’s quarry, the missing person who decides that she doesn’t want to be found. Whereas Kate is working toward becoming the person she wants to be and dealing with those issues head-on, the missing person decides to run from herself name and vocation to mask her fears. Thompson plays this subtly, but it’s an idea worm that burrows in and matures well after you’ve put the book down and it’s played very effectively. And, as to drive the point home, the “what the Hell, is that a dragon?” ending of the book shows the potential consequences of running from who you are and choosing to grow in a healthy.

Penciller Michael Walsh and colorist Jordie Bellaire’s art on the book brings the balance of hard-boiled detective work and superhero brightness that are juxtaposed in the issue’s story. Jess’ outlines seem heavier than Kate’s, reflecting her tough-as-nails attitude, while the colors used for Jess and Kate are indicative of both their sensibilities toward the world and their immersion in the world of superheroics. The combination is effective and gives a proper nod to who these characters are and how their worlds collide.

Hawkeye #5 gives readers a fun, hard-boiled buddy romp while slipping in a treatise about how we rise and fall relative to our insecurities.

Hawkeye #5, written by Kelly Thompson with Michael Walsh on pencils and Jordie Bellaire on colors, is on sale now from Marvel Comics.

Review: HAWKEYE #5
Hawkeye #5 gives readers a fun, hard-boiled buddy romp while slipping in a treatise about how we rise and fall relative to our insecurities.
9Overall Score
Reader Rating: (0 Votes)
0.0