Review: Jem and the Holograms #25

“Jem and the Holograms #25, even with so many plot threads that are coming to a head, manages to be connected with a theme of insecurity and gives readers positive and negative examples as to how to handle that insecurity.”

Jem and the Holograms #25 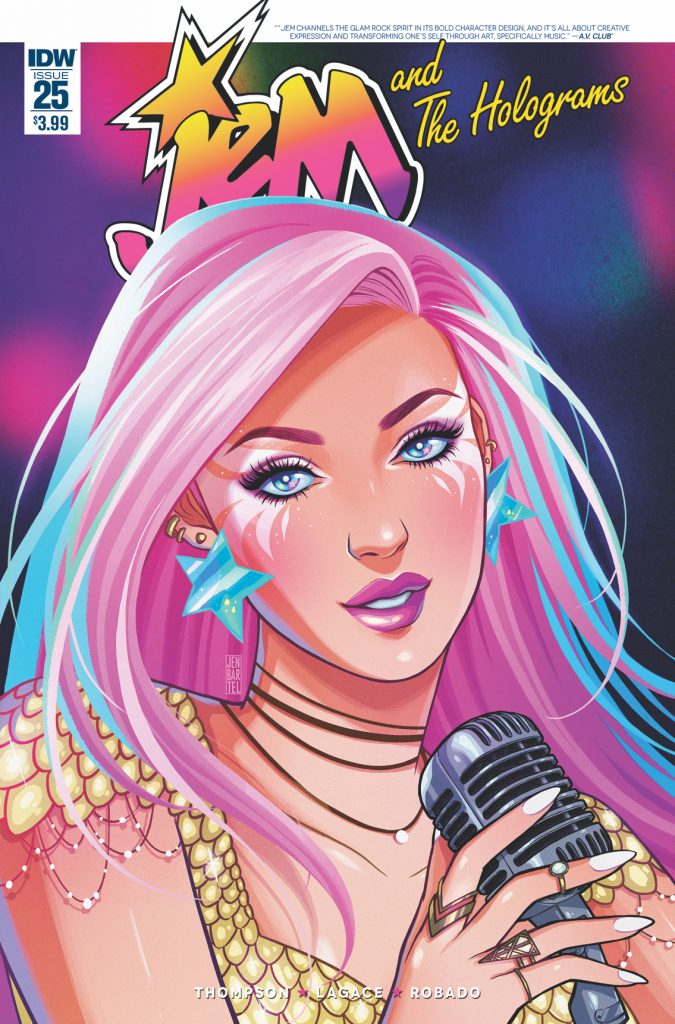 In Jem and the Holograms #25, part two of “Truly Outrageous” and the penultimate installment of the series, we see the fallout from last issue’s cliffhanger, with Jerrica explaining to Rio the wherefores and whys about her double-life as Jem. Not surprisingly, Rio is none-too-happy about the deception and subterfuge on Jerrica’s part, leave the Holograms’ Hawaii guesthouse post-haste. Meanwhile, former Stinger Raya is feeling a bit removed from and an outsider of the rest of her Hologram band mates, just as her former fellow Stingers plot to cause discord in the Hologram ranks, a move that looks to have dangerous consequences.

Thompson drives home how so many of the characters’ actions have been or are currently motivated in some extent by insecurity, and the writer shows how each handles that insecurity. Jerrica’s original decision to adopt the persona of Jem in the first place was due to a certain degree of insecurity as a member of the Holograms. While doing so helped bolster her confidence, it also left her open to poor decisions, such as deceiving others and, in a way, herself. However, Thompson shows a maturity in Jerrica in that, while Jerrica initially tried to rationalize her behavior, she ultimately owns her actions. 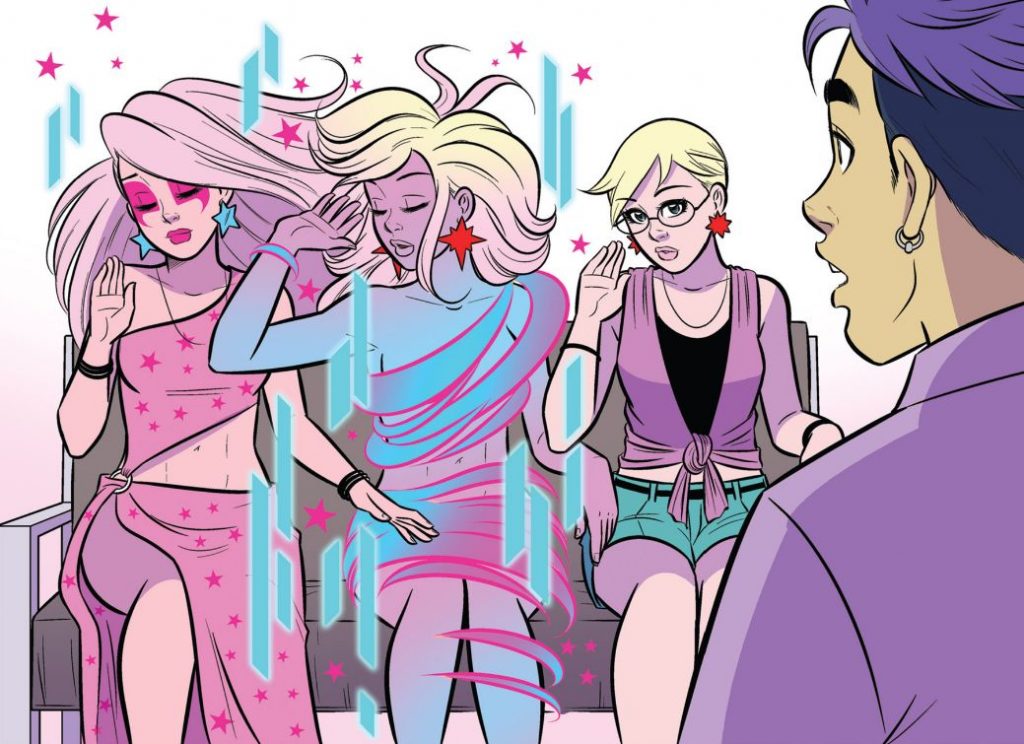 While it remains to be seen how Jerrica will ultimately handle Rio’s absence, some folks dealing with heartbreak don’t exactly have well thought-out plans to handle being alone. The Stinger Riot, still reeling from Jem calling it quits with him, decides the best way to win back her affections is to make her jealous. To that end, he attempts to make a move with Jerrica, who he doesn’t know is secretly Jem. Riot’s example proves that some people don’t handle being alone well and will make ill-advised decisions to mask their insecurity.

Insecurity also makes people go into protective mode, as seen with Hologram Aja. Her knee-jerk reaction to learning that Rio is not onboard the Hologram train now that he knows the truth makes Aja concerned how it’ll affect the future of the band. And while her fellow band mates and Jerrica might feel her questions were ill-timed—and maybe they were—Thompson realizes that everyone reacts to stress differently. Further, while the Holograms are a family, their music is also their business and, frankly, they all have bills to pay. 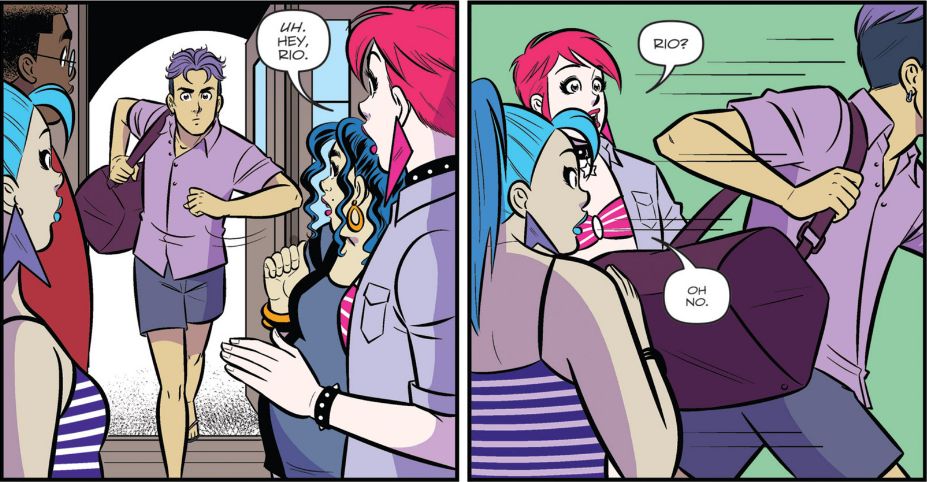 While insecurity might make some question the future, others might lash out like a wounded animal. The Stingers are in Hawaii at the same time as the Holograms and decide to cause chaos among their rival band members in any way they can. Part of that reaction stems from anger in what they see as Raya’s betrayal, but it’s also clear that their actions come from a place of anxiety and insecurity. Losing a band mate has to summon all sorts of questions for the Stingers: their band’s image, its future. While those aren’t excuses for their actions, they are explanations for their abhorrent behavior. That will be small comfort to Hologram Kimber, though, as the Stingers’ chaos proves treacherous for Hologram Kimber and puts her in real danger at the near bubbling lava. Insecurity on all sides is about to bring things to a boil.

Lagace does an excellent job at bringing the necessary pathos in her linework to an issue that is so heavy with drama, something that is key to selling Thompson’s multiple plot threads. At the same time, though, what really struck me in her art this issue is how Lagace really nails the various characters’ youth. There’s a danger that some artists can’t navigate at rendering young folks as a decade or two older than their years. However, Lagace never once falls into that trap. And this is especially is the case whenever she pops up in the issue, particularly when her insecurity threatens to take over Jerrica.

Jem and the Holograms #25, even with so many plot threads that are coming to a head, manages to be connected with a theme of insecurity and gives readers positive and negative examples as to how to handle that insecurity.

Jem and the Holograms #25—part two of “Truly Outrageous,” the final arc of the series—written by Kelly Thompson with Gisele Lagace on art, is on sale now from IDW.

Truly Outrageous Part Two! In Hawaii The Stingers plot against Jem and The Holograms for “stealing Raya” as Riot tries to win back Jem. Meanwhile Jerrica must reconcile the two people she has become – Jem and Jerrica – and that might just mean telling Rio the truth!

Review: JEM AND THE HOLOGRAMS #25
Jem and the Holograms #25, even with so many plot threads that are coming to a head, manages to be connected with a theme of insecurity and gives readers positive and negative examples as to how to handle that insecurity.
9.5Overall Score
Reader Rating: (0 Votes)
0.0