“If you like conspiracy and intrigue or “hard science fiction”, Hickman’s  work on New Avengers is easily the freshest, most unique take on any of Marvel’s pantheon of superheroes currently on the market.”

The word “machinations” should be synonymous with Marvel’s New Avengers.  Since the title launched in January 2013, New Avengers has easily been the best kept secret in the monthly Marvel solicits month after month.  Jonathan Hickman has constructed a very elaborate series of processes that define the existence of the 616 Marvel Universe within its existence amongst a Multi-verse of Marvel Universes.  He has brought back together the greatest heroes, the greatest minds and the greatest leaders of the 616 Marvel Universe and he has tossed them into a very horrifying scenario: the Multi-verse is dying and the death of the 616 Universe is inevitable…unless the Illuminati of the Marvel Universe makes some utilitarian decisions and get their hands a little dirty without anyone being the wiser.

Questionable moral and ethical choices aside, Hickman’s use of the greatest egos of the Marvel Universe is truly the star of New Avengers.  The slow-burning rivalry between the enigmatic Black Panther and cunning Prince Namor pays for the monthly price of admission to this book!  Let’s not forget the cold and calculating voice of reason of Reed Richards or the business-like Utilitarian view of futurist Tony Stark as they casually discuss the deaths of billions in lieu of saving their own universe from destruction while Black Bolt sits silently in the corner taking everything in and helping out with their clandestine affairs.  Even Dr. Hank McCoy, the fan-favorite X-Man/ Avenger, continually has this scientific yet creepily voyeuristic quality to his voice as the group studies the world-destroying events called “Incursions”. 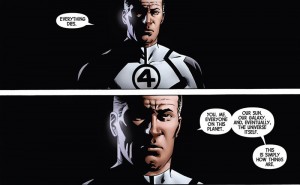 Reed Richards on the inevitable.

In issue #16, readers are introduced to the Illuminati’s newest dilemma in the form of a random variable universe that has survived two world-destroying incursions much like the New Avengers in the 616 Universe.  Ironically, the heroes of Earth – 4,290,001 inarguably appear to be analogues of DC Comics’ Justice League with a dark looking character named “The Rider” with the first name of Wayne, a super-powered being with spit-curled hair called Sun God, a speedster wearing a lightning bolt named Boundless, a Doctor Spectrum (Marvel’s analog to Green Lantern), a very Martian looking “the Jovian”, and a silver helmet wearing Doctor Fate-like “The Noan”.  You could even argue Marvel’s fantastic artistic choice of Rags Morales handling the art chores as a definite ham-fisted cry of intent for the story.  If anything, Hickman seems to be making a mockery of the cast of the New Avengers who have, through secrecy have underhandedly bloodied their hands with billions of lives lost, by holding them up to this morally superior group have refused to accept the process of the Incursions and they just stop them by “finding a way” while understanding the cost of the loss of other worlds. 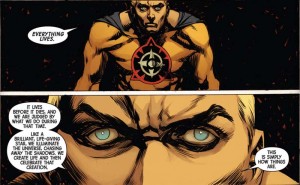 The strongest moment of the book, however, is the shock and awe displayed by Namor and Black Panther (easily the most morally bankrupt of the bunch) as they look at each other and say, “Okay then!  That was strange world…that was different,” and they stare at the screen with somewhat ambivalent looks on their aristocratic faces.  It’s actually a darkly humorous moment, considering the source of the comment.

Marvel and Hickman are up to something with this book.  There’s this electrifying inescapable sense of dread that permeates every single issue of this book; Hickman’s dense grasp of scientific language and concepts continue to fuel the “zero-sum gain” situation these heroes face as they let go of their greatest strengths as traditional (super-)heroic archetypes.

Is there an “end” coming to the 616 Universe in the next few years?  Has Jonathan Hickman been slowly turning the heroes of the Marvel Universe into something darker and more sinister for the sake of their own lives and egos?  If you like conspiracy and intrigue or “hard science fiction”, Hickman’s  work on New Avengers is easily the freshest, most unique take of any of Marvel’s pantheon of superheroes on the market.