Cards on the table: I was very wary of Grayson when DC first announced that Dick Grayson, the erstwhile former Boy Wonder, would be hanging up his Nightwing threads to become a super-spy. Not that he wouldn’t have the style, pizzazz, and the creative team to back up such a thriller romp. But Dick Grayson has always been my boy. While I gravitate to Batman, Grayson is the guy I would actually want as a mentor and a friend. As many a writer has alluded to, Dick Grayson is the Dark Knight minus a whole lotta angst.

That said, writers Tom King and Tim Seeley (Effigy) and artist Mikel Janin must have been feeling the pang of my apprehension from afar, as with Grayson #11, they have proven once again how well they understand the superhero-turned-spy, blending Dick Grayson’s tendency toward high adventure and panache with an urgency when things go sideways. As readers get to see how deeply Spyral has its hooks into Dick’s psyche, King and Seeley use that opportunity to do a character study of the former Nightwing to comment on what makes him tick. Is it a sense of justice? Is it a pathological need for attention, as Dick’s doppelganger suggests as the two come to blows? What moves the former superhero sidekick? It’s hardly a stretch to suggest that King and Seeley understand Dick Grayson better than any writer who has had their hands on the character in recent years, and that’s high praise, as many creative teams have left an indelible mark on the high-flying adventurer. 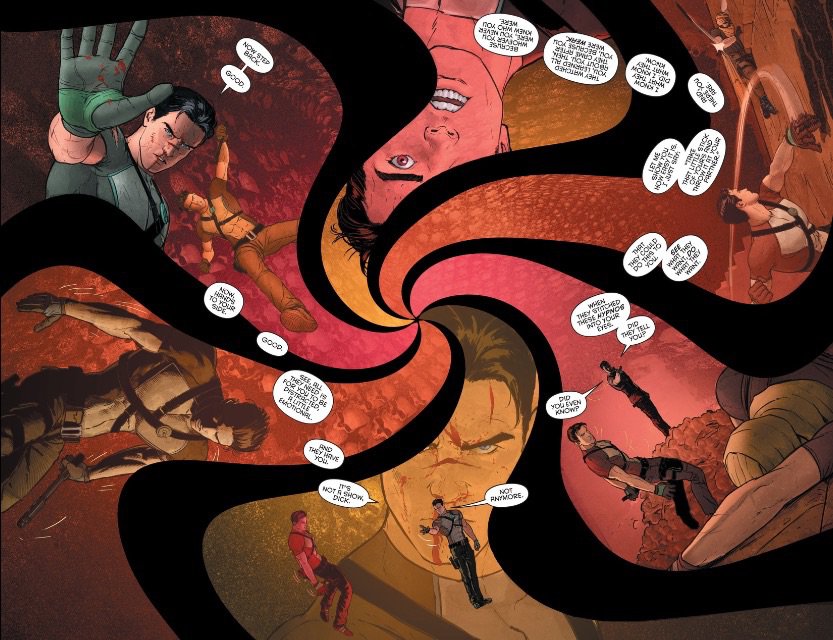 Janin’s pencils help to convey the sense of uncertainty that his cracked-mirror reflection is trying to instill into Dick. The disapproving stare he throws onto Dick could easily be Dick admonishing himself for what he might perceive as failings and failures and missed opportunities. And when Dick’s psyche is finally pushed off its precipice, Janin’s use of perspective and warped landscapes let readers know how broken down a care-free Boy Wonder can become.

Grayson #11, more than any other Nightwing tale in years, strips away the layers of artifice that has been built upon Dick Grayson over the years to get to the root of who the character truly is. Just as writer Scott Snyder has made it a priority to craft tales that delve into the idea of who Batman is, Grayson is the spiritual brother of those tales, showing a Dick Grayson who is wrestling with his own sense of identity. Grayson #11 shows once again that King, Seeley, and Janin are the folks who are more that up to that task. Score: 9/10

Although I’m hardly a fast reader, I can usually speed through a superhero comic with a relative quickness. 22 pages of dialogue and action tend to fly by during an initial reading, and sometimes that’s not necessarily a good thing. With comic book prices edging up ever higher, each title competing for my wallet’s contents, I and other fans like myself have to become more discerning which series we pick up and which will give us the most bang for our buck. 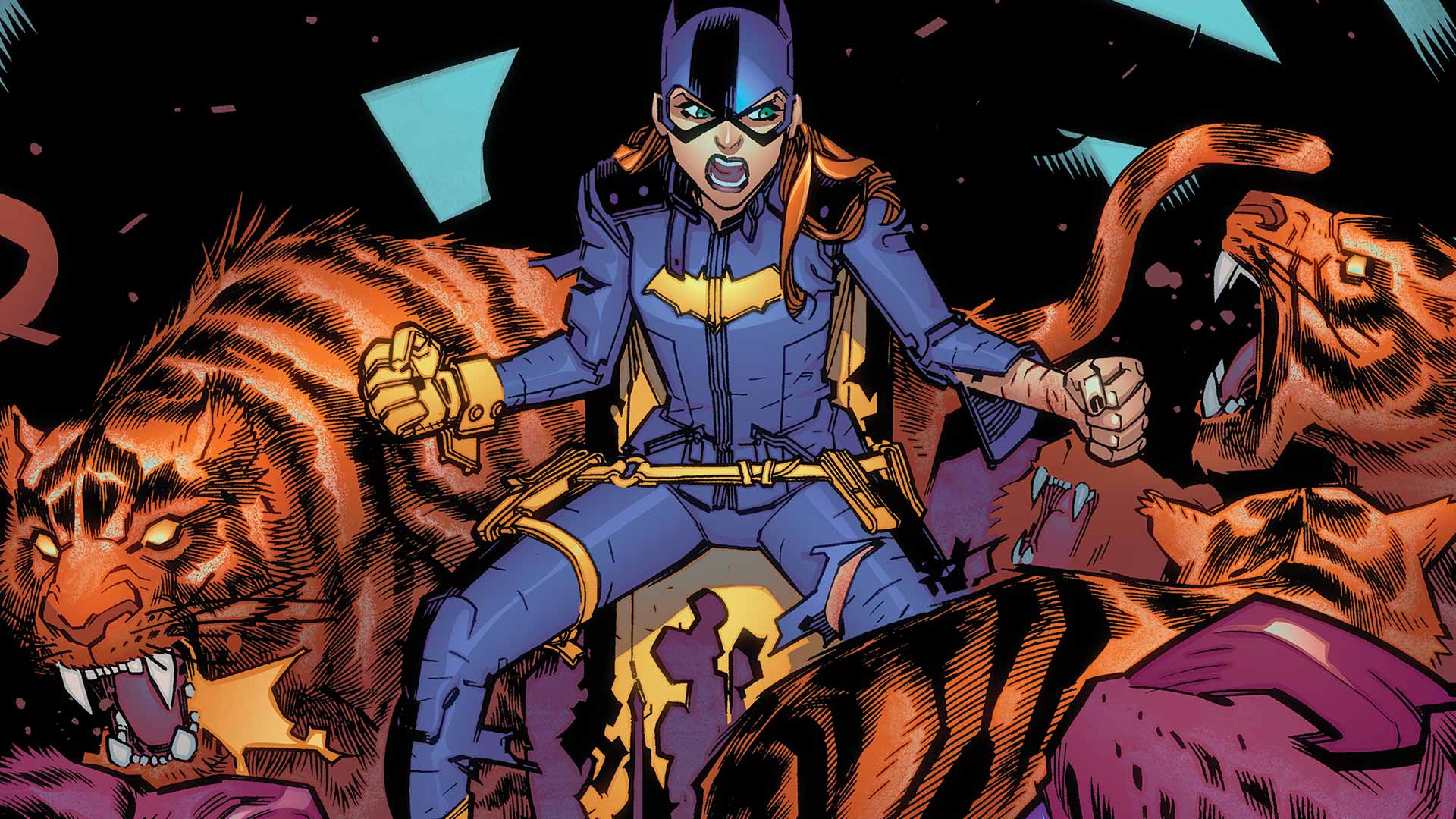 And, really, that’s one of the biggest draws of Batgirl. The creative team of writers Brenden Fletcher and Cameron Stewart (Fight Club 2) and artist Babs Tarr manages not only to pack each issue of Batgirl with more content than most superhero fare, but it’s content that both moves the story of Barbara Gordon and her extended family and foes and leaves the reader satisfied. Issue 43 is no different, as Barbara is juggling ALL OF THE THINGS, having her hands full with her superheroic derring-do, her schoolwork, helping plan friends Alysia and Jo’s wedding, and investigating the disappearance of a ferocious escaped tiger on the prowl. While some writers don’t quite know how to handle so many narrative threads and such a large cast of characters without the weight of it all drowning the series’ star, Fletcher and Stewart use those characters and threads sparingly enough to highlight how they inform Barbara’s life and journey.

Of course, Tarr’s art helps to sell all of these elements, playing fast-and-loose with the pencils to convey the characters’ emotions, while at the same time tightening things up when the action speeds up. Between Tarr’s efforts and the writers’ wordsmithery, Batgirl #43 shows once again that a book in the Bat-stable of titles doesn’t have to be all grim and darkness, but can also have dalliances with the light. Score: 8/10

SPOILERS AHOY: If you haven’t completed the Batman: Arkham Knight video game, maybe come back and read this review later. Just a head’s up.

Writer Peter J. Tomasi has shown for years that he’s adept in navigating the Batman’s world, giving characters as diverse as Bruce and Damian and Dick and Jason Todd their own unique voices, showing why they take the actions that they do and how those actions shape their respective sensibilities and worldviews. In Batman: Arkham Knight – Genesis #1, Tomasi applies that understanding of the Bat-verse in delving into the origins of Batman: Arkham Knight’s chief no-goodnik, the Arkham Knight, aka Jason Todd. (I did warn you about spoilers, right?) While we don’t get to see why Jason made the switch to darkness, we do get a glimpse at his troubled past, with Tomasi smartly addressing the Nature vs. Nurture issue that comes into play when examining a character such as Jason. Despite Batman’s efforts, was Jason always predestined to be pulled into Gotham’s gravitational pull, as Jason’s mother calls it? 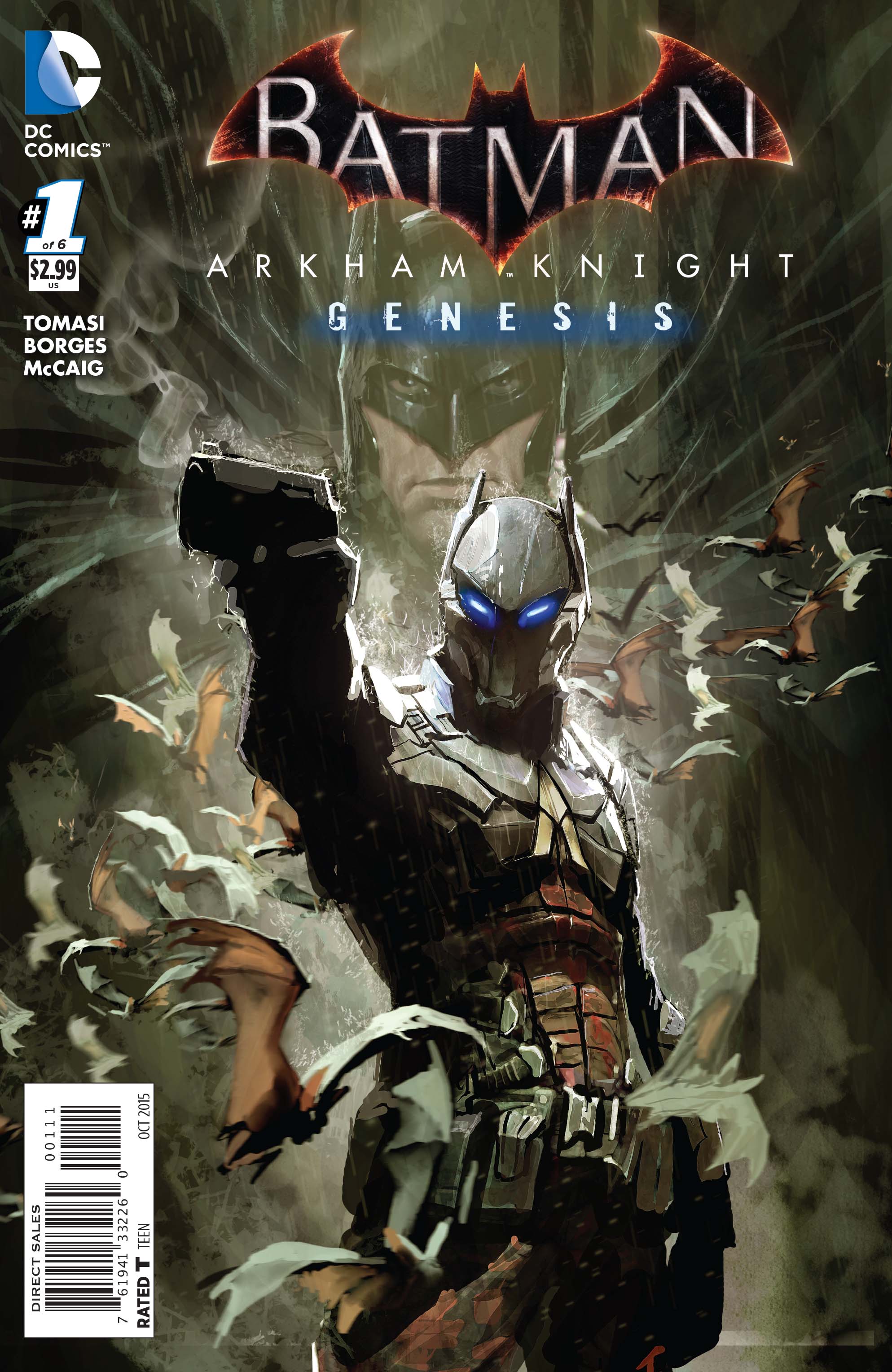 Alisson Borges’ linework serves to convey the sharp edges and disjointed worldview that permeates Jason’s world and outlook. From the rooftop birth scene in the darker part of Gotham to the disdain with which Jason’s mother regards her baby boy, Borges does an exquisite job of showing the delineations between Bruce Wayne’s world of opulence and Jason’s more humble beginnings. Even the pencils shaping an adult Jason’s face and suit have a lived-in quality that show that the sheen of being Batman’s partner has long since dulled.

Batman: Arkham Knight – Genesis #1 is an engaging companion piece to the Rocksteady video game, acting not just as a tether to that game’s world, but also reading as a story that could easily fit into DC’s New 52 world as well. Score: 8/10