“Saga #29 is action-packed, poignant, and absolutely stunning; it gives readers the little bit of the exposition they have been clamoring for and then leaves them aching for the next issue.“

If you aren’t reading Saga by Brian K. Vaughn and Fiona Staples yet, first things first: re-evaluate your life.

Here is the gist of things: Saga’s story begins with a long-fought war between the planet Landfall and it’s moon, Wreath. The battle between the Wings (natives of Landfall) and the Horns (natives of Wreath) has consumed the galaxy and spread throughout the stars, leaving no option of neutrality for any lifeforms drawn into the conflict. At the center of our sweeping epic are Alana and Marko, foot soldiers from Landfall and Wreath respectively, who dissent from the military and elope. Much to the dismay of any government within earshot, the young couple has a baby girl named Hazel. She is the first and only of her kind: winged and horned and cute as hell. Naturally, each of the opposing governments want her and her family and all evidence of their existence destroyed. Hence, the story revolves around the fleeing family, their allies, their pursuers, and their would-be pursuers-turned-allies.

Sound like a lot? It totally is…because it’s a sprawling, dense story.

Now that you’re all caught up, let’s talk Saga #29 as the Last Revolution makes their move. In recent months, Vaughan and Staples have delighted in torturing fans by slowly building tension to a point of discomfort; leaving readers squirming and cursing their names as in anticipation of the next issue. But not this month, however. Saga #29 takes a safety pin to those irritating tension bubbles and bursts those suckers wide open. The story progresses linearly, weaving between three parallel arcs and their respective protagonists. Badassery abounds! but Vaughan is never one to give rise to gratuitous storytelling, so there is, of course, the ever-present resonant theme underlying the action. This month’s theme, in all it’s compelling glory, is sacrifice.

“But here’s the secret about most sacrifices…there’s nothing selfless about them at all. I mean, villagers don’t toss their virgins into a volcano without expecting something even BETTER in return, right?”

Vaughn’s biggest strength on Saga, an exotically extraterrestrial story about an alien war in a galaxy full of unique alien life, is the story’s thinly veiled humanity. Readers will find a number of all-too-human touchstones: family, love, sex, and fear. Saga also has a strong balance of devotion and betrayal. Readers may find themselves wanting to throttle the Vaughn and then, in the next breath, they may want to cuddle him. You can find so much familiarity in the unfamiliar world(s) of Saga.

I suspect that Staples a time-traveling art robot who has returned from the future to entrance comic book fans with her lush, decadent artwork. One of the best aspects of Saga as a series is the book’s rich color pallet that creates an unbelievable depth to each panel. The characters stand out vibrantly against lush, detailed backgrounds. Staples use of light and shadow evocatively directs the eye. Further, every issue, readers are introduced to a new variety of unique physical specimens; so Staples has ample opportunities to impress with her lavish style. Staples’ interiors are often cinematic in scope with no more than five panels to a page; each one is a spanning, verdant work of art. Without spoiling much, Saga #29 has a glorious double-page spread that is a centerfold in every sense of the word. It is as filthy as it is brilliant.

Have you already read the first 28 issues of Saga since you started reading this review? Why not? What are you waiting for? Saga #29 is action-packed, poignant, and absolutely stunning; it gives readers the little bit of the exposition they have been clamoring for and then leaves them aching for the next issue. It has family values. It has beautifully drawn violence. It has dragon genitals. What more could we lowly nerds ask for?

Editor’s Note: This is Syd Williamson’s first comic book review ever. Welcome to FreakSugar, kid. We hope you survive the experience. Be sure to follow Syd on Twitter – @sydsonofwilliam 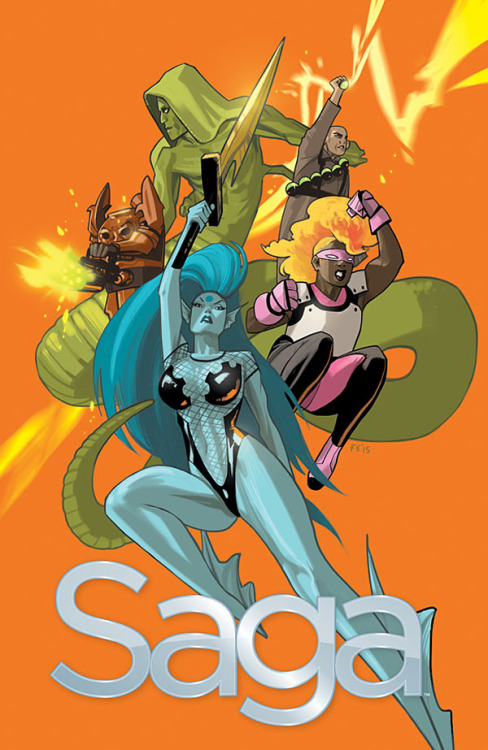