Superman, the father of nearly all superheroes to follow in the proceeding century, first appeared in Action Comics #1 80 years ago. Last month, Action’s publisher, DC Comics, celebrated another milestone with the release of the thousandth issue of the book, a feat no other comic book in history has achieved.

However, DC Comics isn’t the only publisher to pay tribute to the Man of Steel and the creators behind the hero. On May 15th, Super Genius will release The Joe Shuster Story: The Artist Behind Superman, focusing on American ambition and how two friends from Cleveland took their dreams and love of art to attempt to make a living during an economic depression that was making such dreams feel distant. 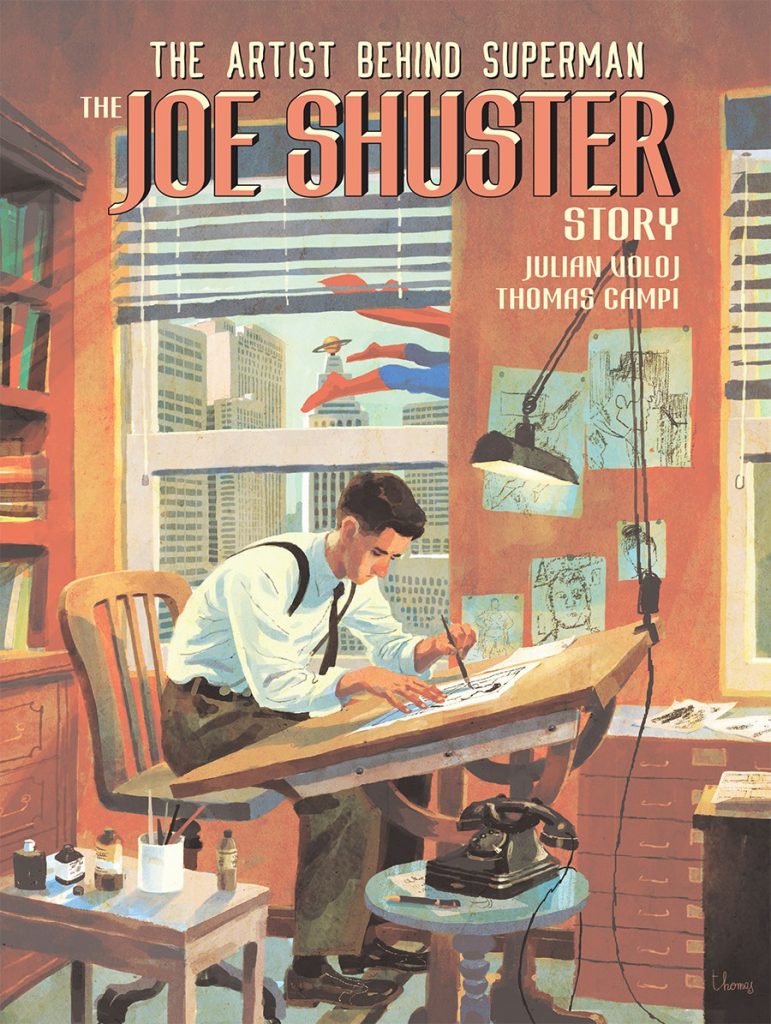 Written by Julian Voloj (Ghetto Brother) with art by Thomas Campi, The Joe Shuster Story will be right at home at Super Genius, which published such acclaimed and deeply personal, moving works as The Wendy Project. Voloj and Campi’s graphic novel fits into that same vein and will throw the light on all of the darkness and light in the history of comic books and how Joe Shuster and Superman co-creator Jerry Siegel navigated the industry’s sometimes troubled waters.

The Joe Shuster Story: The Artist Behind Superman goes on sale May 15th from Super Genius and Papercutz.

About the creators and Super Genius:

Born in Germany to Colombian parents, writer and photographer JULIAN VOLOJ explores identity and heritage in his work. He is the author of GHETTO BROTHER from NBM, which was named one of BOOKLIST’s top 10 graphic novels of 2016. He lives in New York City.

Thomas Campi is the artist of the Magritte biography published by Self Made Hero, and an award-winning Italian graphic novelist who has been making comics for over 18 years. He has been published across the world by various publishers. The graphic novels Les Larmes De Seigneur Afghan, script by the RTBF (National Belgian Television) reporter Pascale Bourgaoux and Vincent Zabus, and Macaroni!, script by Zabus, published by Dupuis, have both been awarded the Cognito Prize as Best Documentary Graphic Novel at the Belgium Book Fair in Brussels in 2014 and 2016. In 2014 Thomas received the International Spectrum Fantastic Art 21 Gold Comic Award and in 2015 has been also recognized with a Bronze Ledger Award in Australia. He is currently working in collaboration with Vincent Zabus on “L’Eveille” (The Awakening), a graphic novel to be published by Delcourt.

Super Genius is the teen+ imprint of Papercutz, the #1 Kids’ Graphic Novel publisher. We love comics of all sorts and we wanted to create a brand aimed at older readers and adults. Something that would complement our strong kids’ presence while still offering the variety and diversity that has made Papercutz so successful.