When the villain Bane first faced the Dark Knight during the initial introduction of the character, he spiritually and physically broke the Batman. Over their following encounters throughout the years, Bruce Wayne has worked to ensure that he’ll never find himself in that same spot when contending with the physically and mentally formidable adversary.

However, it could be that Batman’s luck has run out when it comes to Bane. In “I Am Suicide,” the Caped Crusader is finding himself worn down to the brink of mental and physical exhaustion during a raid of Santa Prisca Prison, in attempt to steal the Psycho Pirate from Bane. Adding to his worries is the betrayal of Catwoman, whom Batman often considered one of his closest allies and confidantes.

I recently spoke with Batman writer Tom King about issue #12, the fourth part of “I Am Suicide,” where we find the Dark Knight, and how Mr. King’s addition to the Batman’s origin story might connect with fans of the character. 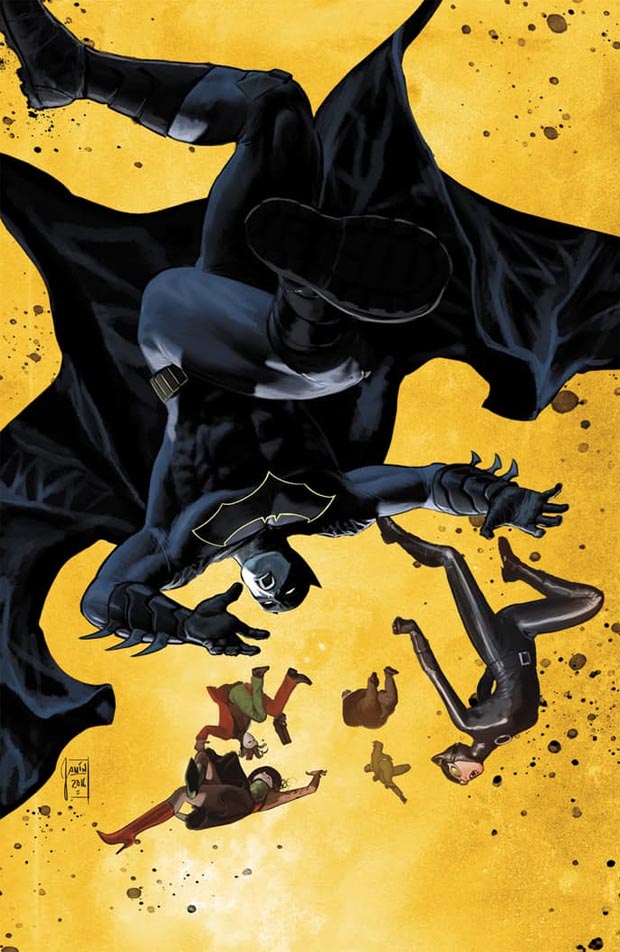 FreakSugar: For folks who might just be dropping in on “I Am Suicide,” where do we find the Dark Knight at the beginning of issue #12?

Tom King: What you basically have is a heist movie. Batman has formed his own suicide squad out of his formal villains in Arkham Asylum. In the first three issues, they’ve invaded Santa Prisca Prison. They’re trying to steal the Psycho Pirate from Bane.

In the last issue, everything went wrong. A member of his team—Catwoman—betrayed him and the team and killed two of the members. She then told Bane, the bad guy, about the plan and told him she knows how to capture Batman. So, in issue #12, Catwoman helps Bane by saying to Batman that Psycho Pirate is in a room, you have to cross the entire prison to get him. It’s Batman versus the entire prison.

FS: How would you describe Bruce’s headspace following Selina’s betrayal?

TK: It was previously revealed that Catwoman confessed to killing 237 people. A terrorist organization blew up an orphanage so Catwoman killed them all. Imagine how you’d feel if a group like ISIS did that? That’s what Catwoman did.

But in this issue, you see that Batman doesn’t believe her, that he thinks she’s lying. Which is exactly what Batman fans said. [laughs] All that frustration that Batman/Catwoman fans felt, who said “That’s stupid”—that’s what Bruce says.

Bruce opens himself up emotionally to Catwoman in this issue and reveals his deepest secret to her. He says to her that he knows her because they share the same pain and that connects them forever. For her to betray him after this letter was sent that we’re reading in the issue—that puts him at his lowest point ever.

So we have him fighting through this issue until he can’t fight anymore. He’s barely standing before Catwoman and Bane at the very end and he’s about to get broken. 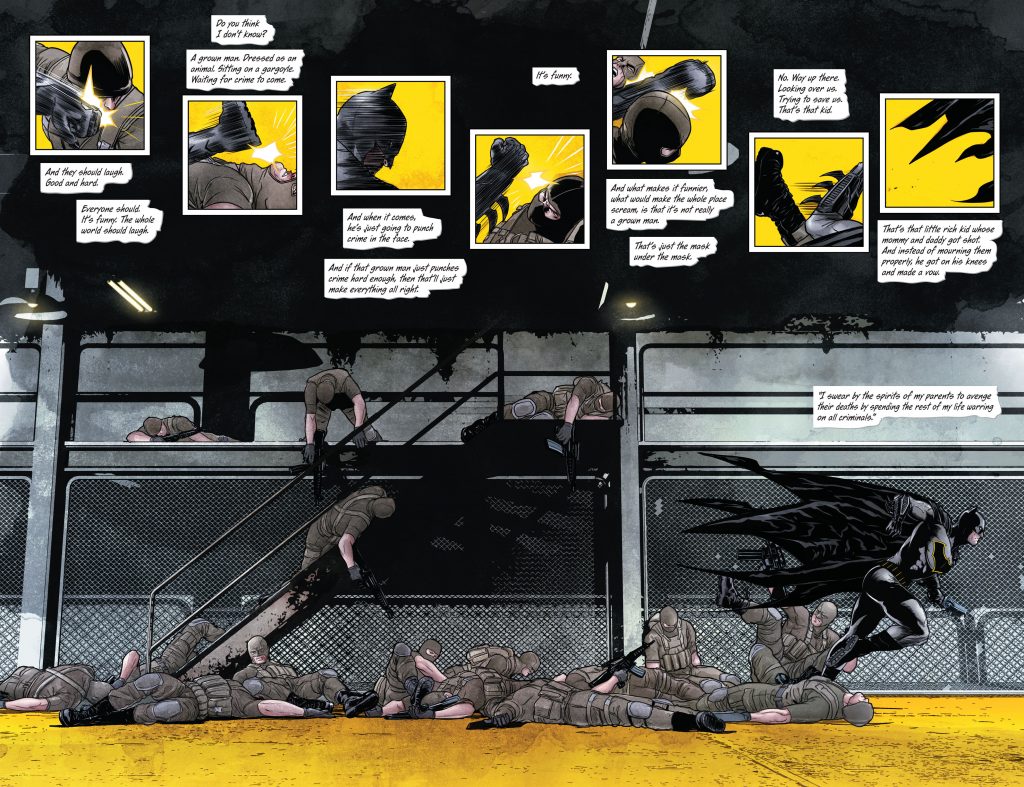 FS: It’s a nice callback to when we were first introduced to Bane all those years ago, when the villain put Bruce through the gauntlet of Arkham villains before facing him. This story, though, adds that emotional element with Catwoman.

At the beginning of the issue, we read in Bruce’s letter to Selina what his thoughts are on what he thinks his parents would think of him being the Batman. Is this a view of himself that he’s come to recently, or do you think it’s always been in the back of his mind?

TK: I think it’s something that’s always been in the back of his mind. There’s this idea that Batman is an absurd figure and blatantly so. Bruce knows that. He knows it’s crazy for a man to run around in a bat-suit and go around punching people. He knows that.

And he says that. He says that he wants to laugh. He’s a smart guy. He’s the smartest guy in the DC Universe. He says that he knows it’s a stupid, absurd thing to do. But he also says he doesn’t laugh because everything he’s done in his life is based on a decision he made when he was 10 years old. It’s a decision to throw away his life and have Bruce Wayne throw away that part of himself so he become a force for good.

Bruce says that’s what’s absurd about himself is tragic and what’s tragic is absurd. I think he’s always known that about himself, but he’s never shared it with anyone. He shares it for the first time with Selina.

FS: This issue is one of those introspective installments I always enjoy, which usually involves doing some self-reflection. While there is plenty of action to move the plot forward, why was this an appropriate place for this chapter to fall?

TK: We’re halfway at the end of the story of the first year of Batman. We had “I Am Gotham” and we’re in “I Am Suicide” and we’ll have “I Am Bane” to conclude the trilogy I’m writing. So I think it’s good to delve into where Bruce is emotionally since we’re halfway through this journey.

FS: Focusing on Bane for just a second, the man is such an iconic character at this point, with numerous iterations across so many media. What is it about Bane that calls to you as a writer and made you feel like you had a new dimension to add to his legacy?

TK: It comes from a conversation with Andy Khouri, who was my editor on The Omega Men. It was before I was writing Batman. He said that Bane is the best villain ever and I said, “Are you crazy?” [laughs] Andy said to look at his origin: For 17 years, Bane was in the same prison cell. At night, it was flooded, so he had to tread water for eight hours while fish bit at him.

And I was like, “That’s his origin? This Conan the Barbarian-like survival?” I couldn’t do that for two days and he does that for 17 years. [laughs] That’s what got me. That’s the most badass thing I’ve ever heard! [laughs] So I went back and read the Chuck Dixon comics where those stories came from. I was like, “This is amazing!” 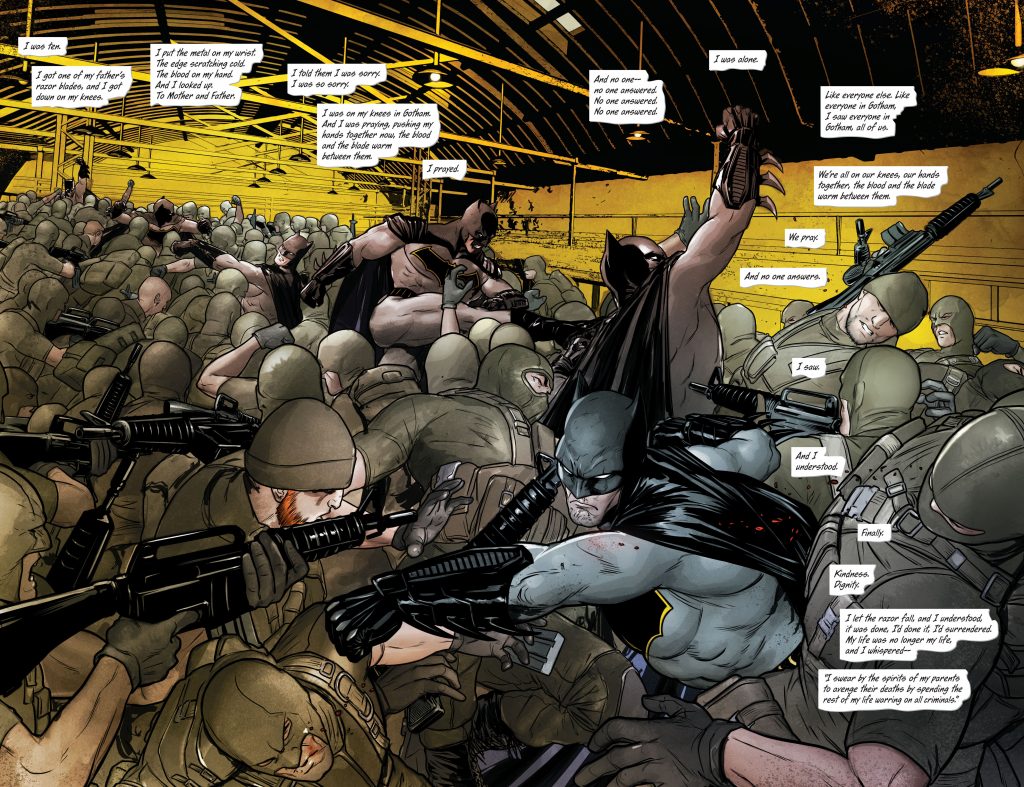 FS: We know so much about the backstory of what Bruce did following his parents’ murder and his vow to wage war on the criminal element has an almost mythological feel to it. In this issue, however, you address a despondent young Bruce considering suicide. It works really well, especially in the context of who Bruce sees himself to be as an adult. Was this an effort to further humanize the face behind the legend?

TK: To me, it’s making literal something that a lot of writers before me have put into Batman, especially Scott Snyder, Steve Englehart, and Bill Finger. It’s this idea that Bruce Wayne is the mask and Batman is the true character and, in some ways, Bruce Wayne died when he made that vow to wage war on crime.

And it makes it personal. I think a lot of people who come to comics come to them as outsiders of society. I don’t know why comics attract people who don’t fit in. I know I’m one of those people. I don’t know what it is about panels and punching that does that. I know a lot of them have had these thoughts that they’re utterly alone in the world and don’t deserve to exist. Batman has been there with you. What got him out of that, what saved his life, was giving his life to a cause greater than himself. And that cause was fighting criminals and saving people.

To me, it is building on the legacy of who Batman is and adding my personal touch. I think that’s my job as the writer of Batman.

FS: Is there anything you can tease about issue #13?

TK: My editor called me after he read the issue and said, “Tom, readers’ jaws are going to be on the floor.” I don’t know if that’s a good thing or a bad thing. [laughs]

Batman #12, written by Tom King with Mikel Janin on art, is on sale now from DC Comics. Issue #13 will go on sale next Wednesday, December 21.

From the official issue description of Batman #12:

“I AM SUICIDE” part four! As Bane decimates Batman’s team, the Dark Knight must decide how far he’s willing to go—and who he’s willing to sacrifice—for those he left in Gotham City.