Since the beginning of the Iraq War, several creators have brought their own spin to the events that occurred during and following the United States’ invasion of Iraq, to varying results. Many of those stories have a tendency to feel heavy-handed and preachy, with an agenda to push.

This is not the case with writer Tom King and artist Mitch Gerads’ DC Comics/Vertigo series The Sheriff of Babylon. The creative team has a clear mission to put forth a tale that is engaging and character-driven, leaving the readers to take from the book’s tales what they will.

I recently spoke with Mr. King and Mr. Gerads about the idea by The Sheriff of Babylon, the new story arc that has begun with this month’s issue 7, and how the two try to bring an authenticity to the book’s characters.

FreakSugar: First of all, I have to fanboy out and tell you how much I adore The Sheriff of Babylon. It’s one of the first books I read from my pull list the week it hits newsstands.

Mitch Gerads: That’s one of the biggest compliments, man.

Tom King: Wait, he said “one of.” What are the other books we have to take down?

TK: Man, I know that guy. He’s an arrogant prick. [laughs] I know him well.

FS: Tom, for folks who haven’t checked out The Sheriff of Babylon yet, how would you describe the series?

TK: The basic premise of the series is that it’s a crime series set in post-invasion Baghdad in 2004. The idea behind it is to make the best comic book version of an HBO show you can imagine. It’s The Wire in a war zone. 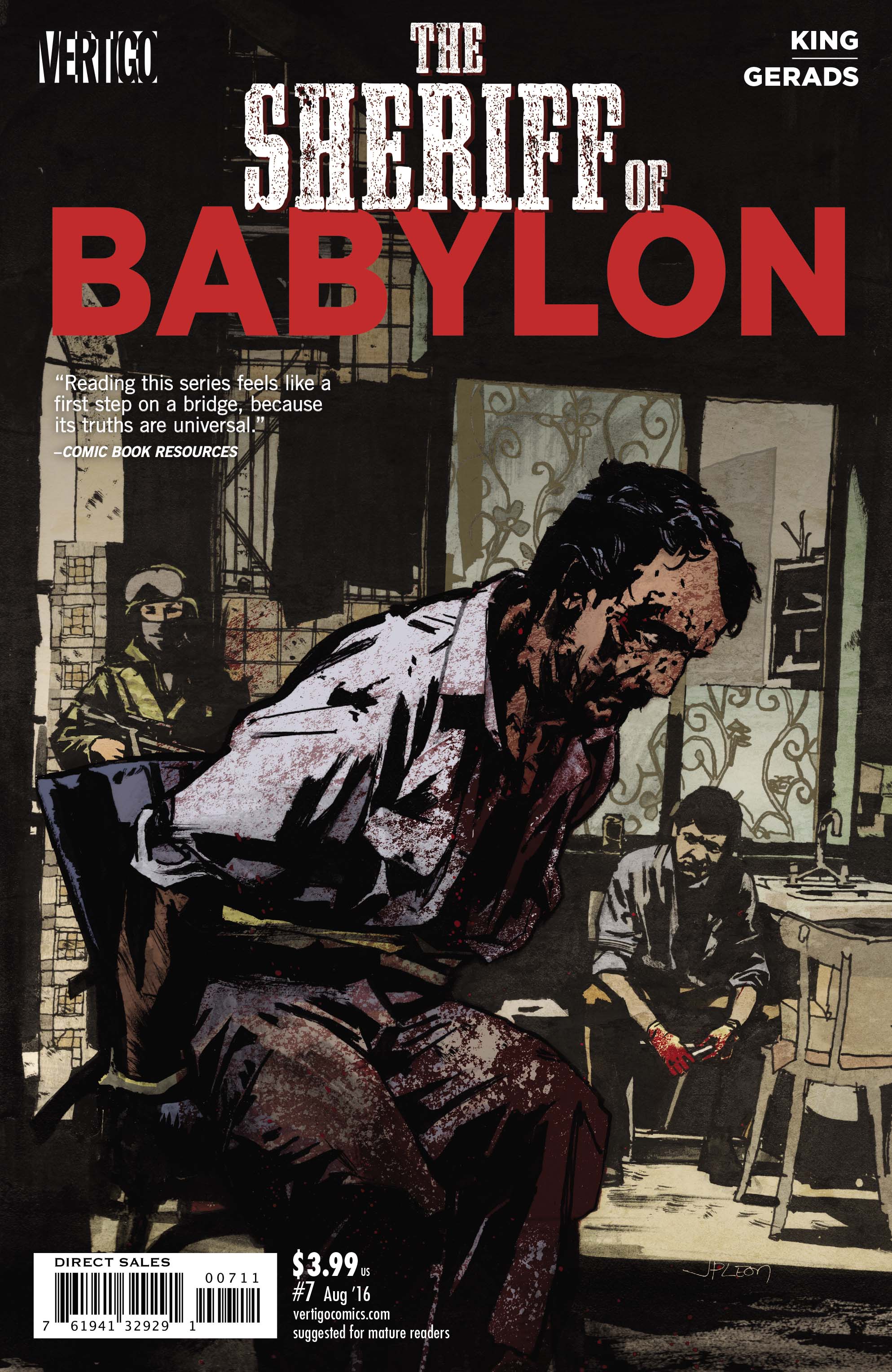 THE SHERIFF OF BABYLON #7 cover

FS: The art is phenomenal, with a gritty mix of war comic sensibility and crime noir. How did you and Tom decide what the look of the book should be?

MG: I knew I wanted it to look realistic, obviously, because it’s a realistic book that comes from a realistic place. I have a great story about how I approach the colors. A fan came up to me at a show and we were talking about a previous book I had done. He was telling me that he had PTSD from war and that one of the reasons he loves comic books is because he remembers that time in colors. The first time he was shot at, it was toned in blue. When he saw his first IED, it was toned in yellow.

That really hit me how important color is. So when I approach the book, each character has its own color. When characters meet up, their colors combine or they create a new color. I try to frame every scene in terms of color, like the Steven Soderbergh movie Traffic. 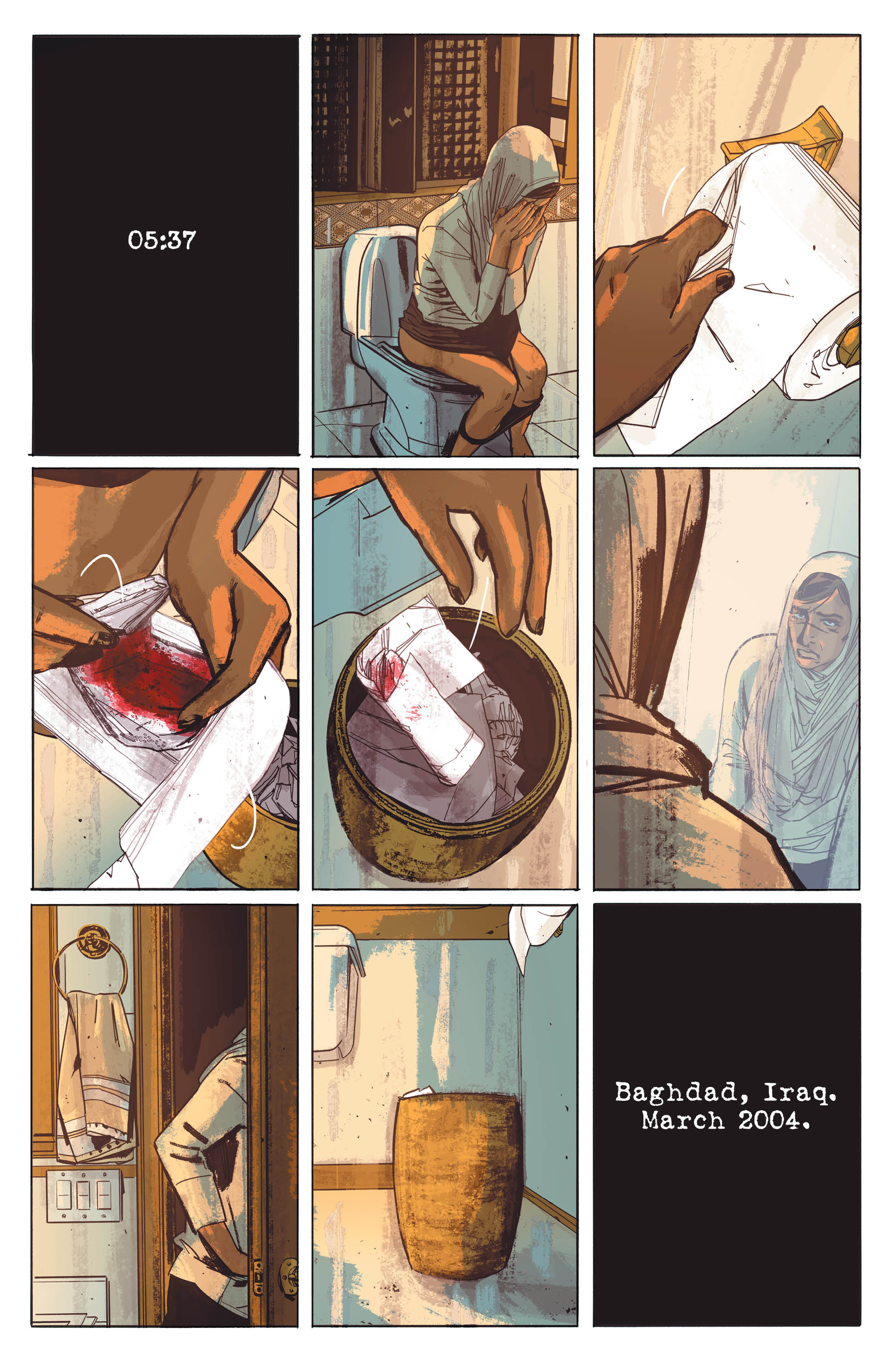 THE SHERIFF OF BABYLON #7 page 1

FS: Tom, a conversation about Sheriff would be incomplete without touching on your time in the CIA. How did that experience inform how you approached the book, both in accuracy and tone?

TK: From the beginning, I haven’t really loved a lot of books about the Iraq War that I’ve seen. I feel like they’re shouting at me about the war instead of talking to me about the war. I feel like we’re far enough way to really see it’s not black and white. It’s full of complicated colors like Mitch mentioned.

It’s not just about who’s right or wrong. We know that there were real heroes fighting out there. We also know that some of the causes set out by the higher-ups weren’t great. Both of those can be true at the same time. Even beyond all that, I didn’t want to talk about that. I wanted to talk about the day-to-day stuff without it feeling like homework. I wanted to bring an interesting take to the story. 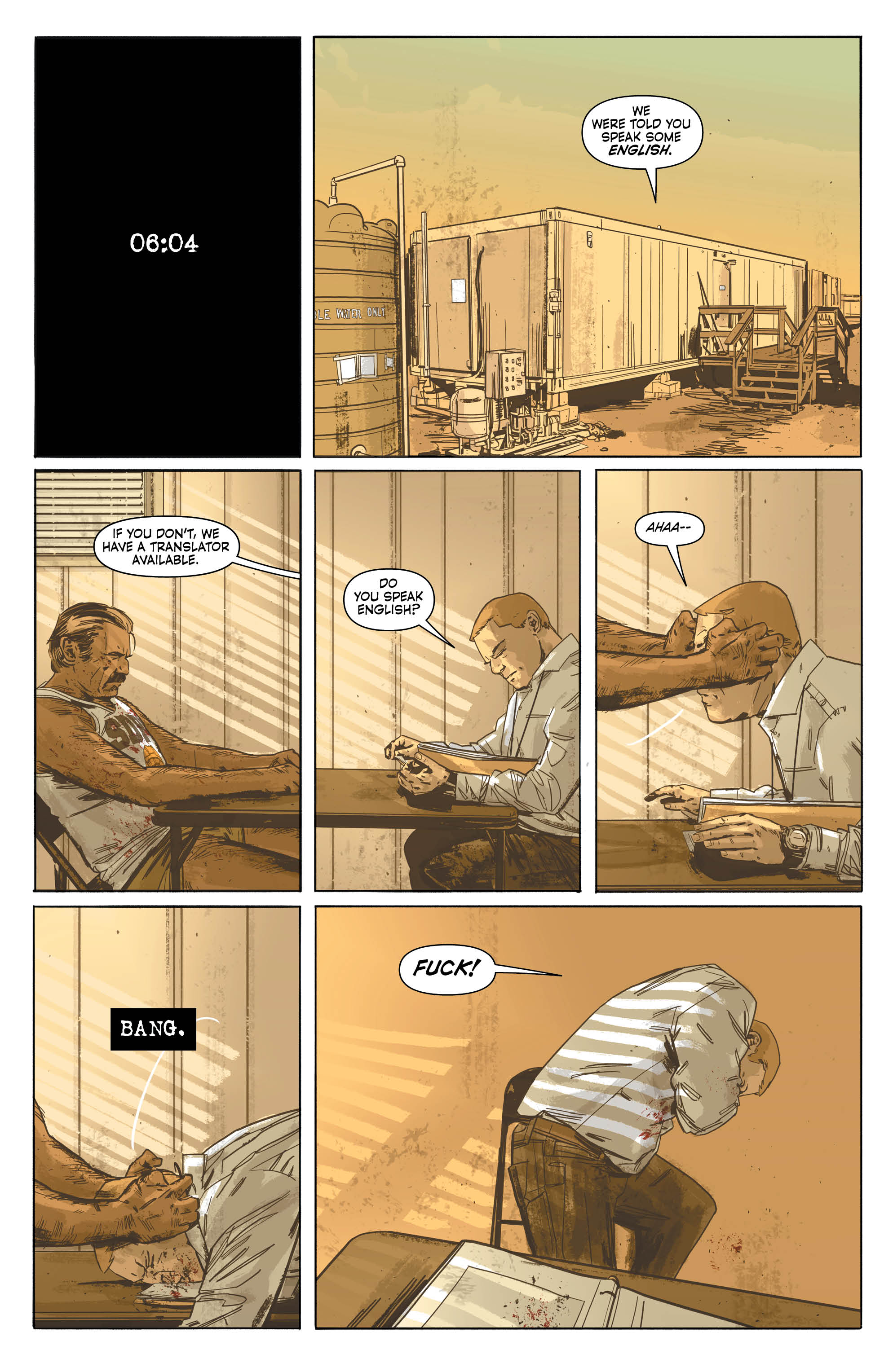 THE SHERIFF OF BABYLON #7 page 2

FS: Tying into that, I’ve never been to the Middle East and what I know about the region and the people, I only know from the news and what I’ve read. However, the characters in Sheriff have an authenticity about them that read in a way that they feel real. Are any of the characters in the book based on people you met while in the region or pastiches?

TK: I think every character I’ve ever written is a pastiche of people I’ve met, their looks and personalities. And you also add yourself to breathe life into the Frankenstein monster. That’s what life is. In some ways, the characters in the book are clichéd characters: There’s the innocent American, there’s the warlord, there’s the good cop living in a bad area. You take those clichés and try to bring the real to them as much as you can. The real comes from your own emotions and your own experiences and the things that make you scared.

FS: Mitch, back to the look of the title and speaking of authenticity, the characters and the region as depicted in Sheriff feel pulled out of real life. What’s your process like for bringing that authenticity to the forefront?

MG: It all stems back to Tom’s scripts. The first time I read the first issue of Sheriff, every character felt real. It was my job to continue that and make it visual. I threw in things I’m interested in. I’m so into research, I researched the people online and other sources. I then used Tom’s script and translated that on paper. 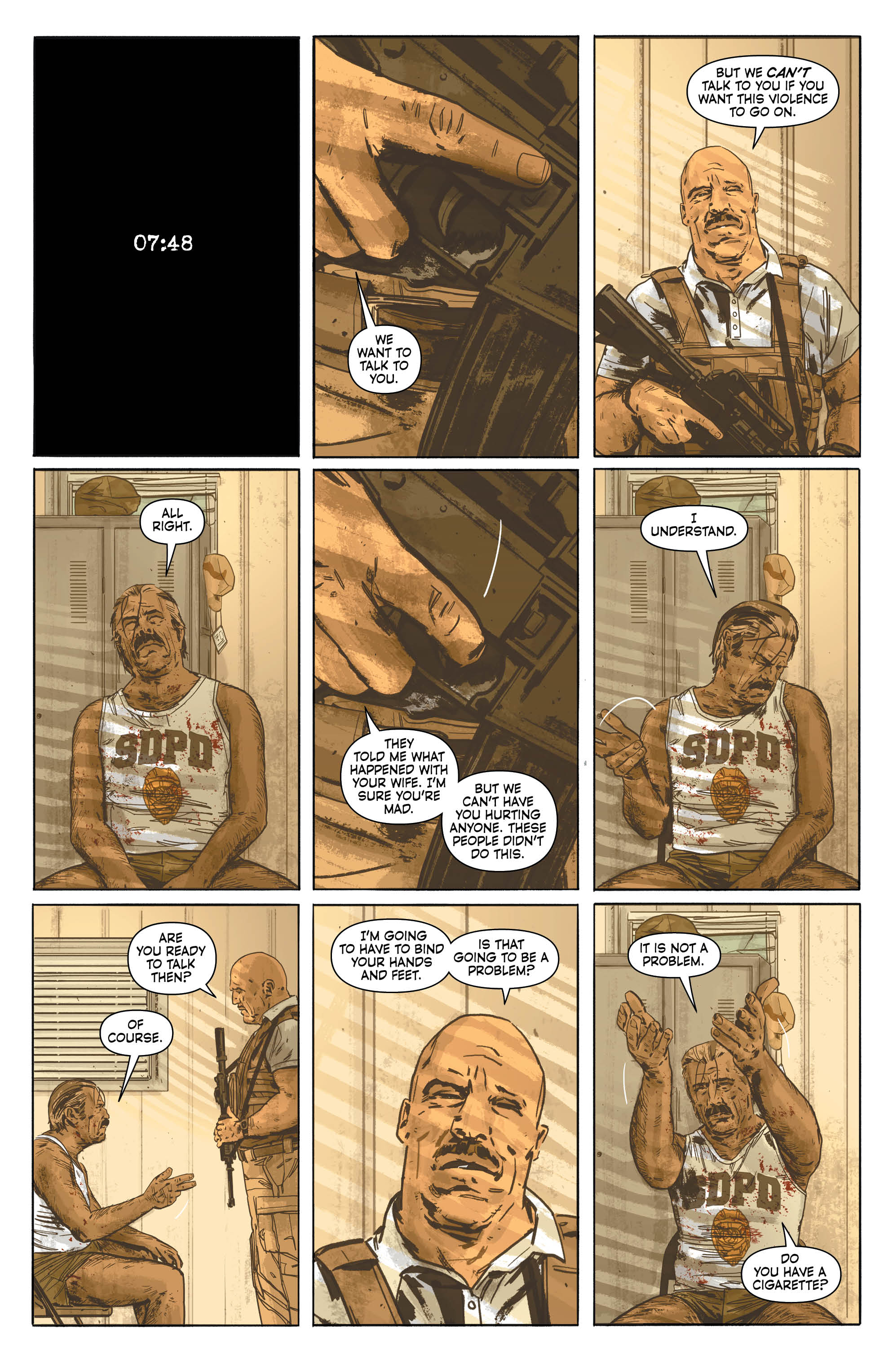 THE SHERIFF OF BABYLON #7 page 3

FS: For readers who’ve been following along, where do we find our cast in the beginning of issue 7?

TK: Pretty much in the worst place they can be. [laughs]

MG: The way I always frame it is that if issue 6 is considered getting stabbed, issue 7 is 22 pages of twisting the knife. [laughs] 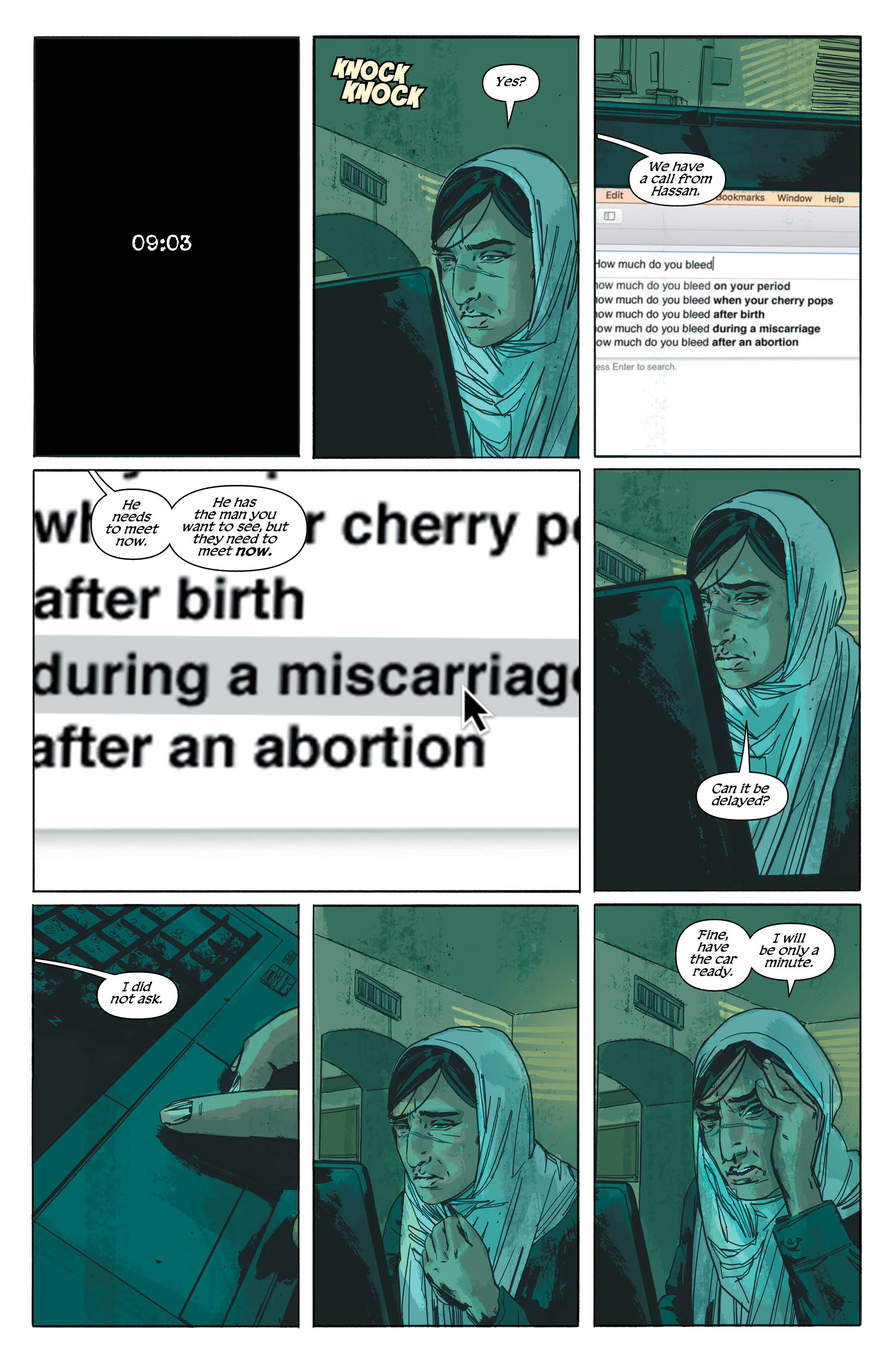 THE SHERIFF OF BABYLON #7 page 4

FS: I consider a great compliment to creators that, when I’ve read a book, I have some sort of visceral reaction to it. I didn’t quite throw the book after issue 6, but I did throw it across my desk. [laughs] I was like, “Eff it!” [laughs]

MG: I totally understand that! After I read the script for issue 6, I took a couple hours out of my day to go for a walk and chill out because I am so emotionally invested in these characters. Part of it was processing it and part of it was realizing how good of a story it was and how I then need to translate it as well as I can.

TK: I am usually emotionally detached from this stuff. With issue 6, I knew what was coming. But with issue 7, it was hard for me to review the lettered copy for approval. It was the first time I couldn’t look at a comic I’d written for a while.

MG: I felt really bad, too, because issue 7 was one that we went the most back and forth on after the story and the art had been paired.

TK: You probably notice my lack of response, Mitch. [laughs] 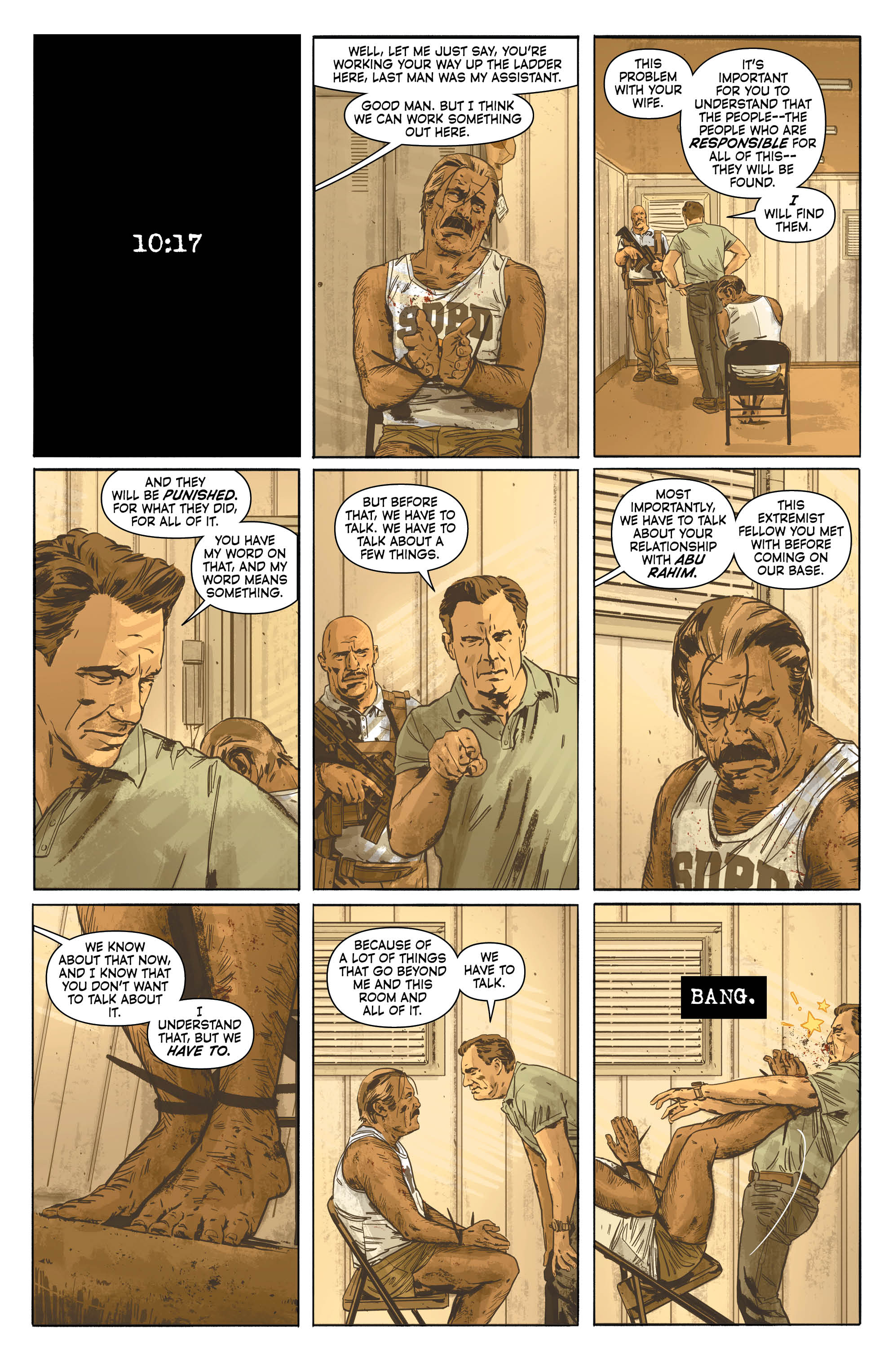 THE SHERIFF OF BABYLON #7 page 5

FS: At the end of the day, what would you say to readers considering picking up the book to get them hooked?

TK: I think this book has its problems like when you first watch Breaking Bad or The Wire or even Game of Thrones. You conjure up this idea that it’s going to be hard. When you come to comics, you come to comics for a break. You come to comics for fun. We’re aware of that problem. Our mission is to give you an entertaining story. We’re not here to educate you or change your mind about anything. At the end of the day, you can read this for the best crime drama out there.

MG: I also think it has a reputation for it for being heavy. I think that people have their own preconceived notions because it’s a war book and they have their own opinions about the Middle East, etc. But it’s just a book about humans. To Tom’s point, it’s heavy and has drama, but I think, because of that, the comedy beats are some of the best in comics. Whenever Tom writes a comedy beat, I laugh out loud.

The Sheriff of Babylon #7, written by Tom King with Mitch Gerads on art, is on sale now from DC Comics/Vertigo.

From the official issue description of The Sheriff of Babylon #7:

Things are heating up in Baghdad. What started as the search for one man’s killer has turned into something much deeper, and everyone has lost something in the violence that followed. Now Nassir is in the hands of the men who may have been responsible for all of it. What they want from him is unclear, but it’s a payment they intend to take in blood.