Troy Brownfield is not a stranger to the comic book industry or the world of journalism. He’s kind of immersed himself in the craft of writing as if it were the Speed Force.  He’s recognized for his work with Newsarama and his column Best Shots; his work with his own Pop Culture site, Shotgun Reviews; he’s contributed to Wired magazine as well as their website; he was a columnist for Fangoria as well as an Associate Editor for their comic line; he’s co-written a Batman story and a Buck Rogers story with his friend and Newsarama alum, Matt Brady; and he’s established himself as a regular writer for Zenescope with projects like Grimm’s Fairy Tales: Myths & Legends.  One has to wonder if Troy’s hands ever get tired.

Except, now, Brownfield has blood on his hands…and it’s not from working them to the bone; in June, Troy launches The Blood Queen with Dynamite Entertainment.  Surrounded by a large arsenal of hot artistic talent including Fritz Casas and Alé Garza, this project marks Troy’s first ongoing series from a larger publisher in the industry.

I sat down with Brownfield earlier in the week to discuss the new project as well as his own adventures with his webcomics series, Sparkshooter, and to discuss his love of the craft of writing and the myriad of successes he’s created through persistence and hard work.

FreakSugar:  Troy, you’ve been slowly gaining momentum in the industry for years now.  You’ve been a successful journalist in the industry; you’re a regular writer on Zenescope projects, you have the new Blood Queen ongoing series at Dynamite and you’ve been successfully producing your own webcomics, Sparkshooter and Solo Acoustic, for quite some time.  What’s your secret?  Red Bull?

Troy Brownfield: Man, it sounds awesome when you tell it! Honestly, I’ve been really luck to earn the opportunities that I’ve gotten. There are some days when it felt like that slow-momentum would never become actual momentum, but I’m in a pretty great place now in terms of a lot of the things that I’ve had a chance to do. There’s no real secret to it, I guess. I’ve basically just worked on things pretty much every day of my adult life. Some of it was websites, some of it was journalism, some of it was comics or music or prose, some of it was just thinking about and visualizing what I wanted to do. But I just never quit. I got discouraged about it or depressed about it or angry about, but I never stopped. Maybe it was optimism or stupidity or a fine combination, but I always felt more strongly about keeping on than giving up. Eventually, some of those things turned into real things. Each one has a specific story, but that’s the truth of it. If I had stopped, it wouldn’t be doing what I’m doing now.

Brownfield: It’s an interesting mix. There are some bits that you can very clearly say, “Oh, that name is from history, or that incident is modeled on a real thing”. Mostly, it’s a dark fantasy story that is inspired by Bathory, and then carries in the direction of “What makes a good person go bad?” or “What builds a Wicked Queen archetype?”. At the same time, you’re trying to balance the notion of having a lead that’s probably going to go down a certain path. How do you give the audience that character and get them to take that journey knowing that they may do some reprehensible things? You can see the tension of that in the first arc. 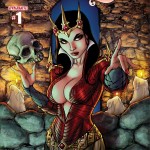 Cover Art for The Blood Queen #1 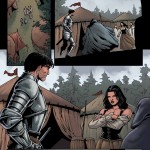 FS:  What other sorts of elements can readers expect in Blood Queen?

Brownfield: If I may quote myself from the original ComicsPro announcement? “We’ve got the horror element, the fantasy element, and we have medieval drama and all that entails.  That means knights, witches, monsters, warring kingdoms, star-crossed lovers, betrayal, and loads of secrets.  Or, as I like to call it: a great time.” That’s really the best possible answer, I think.

FS:  What are sorts of challenges do you face creatively when you are scripting or coming up with new projects?  Was Blood Queen something you pitched to Dynamite?

Brownfield: Ah, a two-for-one question! I’ll take the second part first. I had already been talking to Dynamite about something (oooh, foreshadowing!) and the possibility of doing something else came up. I ended up talking to my editor, Molly Mahan, who had a particular premise. Based on that, I put together the thing that we ended up calling Blood Queen. Molly is a terrific editorial presence. She gives me room as a writer, and her suggestions are always solid, just a great person and personality to work with.

Now, as to the first part: there are a bunch of ways to view it, but there’s a very real element to the creative process wherein it’s kind of like solving a puzzle. It could be that the riddle is your premise, and the plot ends up being how you solve that riddle. When you’re putting something new together, you want it to be different, but you always want to have some identifiable appeals to it. A pitch is basically selling someone on something that you probably haven’t done yet. And no matter what you say, the idea always changes in the work. New things pop up or the editor suggests new things or the artist draws in an idea . . . it’s constant motion. The best thing that you can do is to try to expect that different things happen, and that they’re different for each project.

FS: Let’s switch gears and talk about Sparkshooter; where are you now with this project in terms of production and publication?

Brownfield: Sparkshooter is in “Chapter 3”, or what you’d essentially call the third issue if it were print. Enkaru is drawing the hell out of this and she’s well ahead, so that’s good news. There shouldn’t be a break between 3 and 4. Chapter 3 was really about the first practice with the new line-up and integrating Sondra into the band. Chapter 4 will open with a flashback to some of the guys in their teens that sets up a couple of dynamics that we’re going to follow. The rest of 4 covers the first “night out” as a band, followed by their first important gig crossing Chapters 5 and 6. There are a lot of twists in there, by the way. The end of Chapter 6 closes out the first “volume”.

As to publication, that’s an interesting question. We’re exploring different ideas on that end, and I want to do it in a way that honors both original artist (and co-writer of Image’s Alex+Ada) Sarah Vaughn and Enkaru, who took over art with Chapter 3. When I have news on this, I’ll shout it from the rooftops. 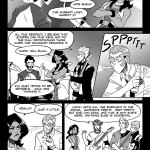 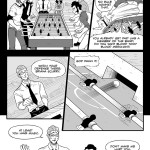 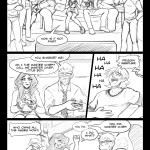 Brownfield: The absolute most important thing is lead time. Don’t launch unless you have a bunch of stuff in your pocket. Update regularly, and talk with your readers regularly. The importance of all that cannot be overstated.

FS:  You’ve been establishing yourself with Zenescope, Dynamite and others for a few years now; what’s on the horizon for you in terms of other publishers?

Brownfield: Blood Queen #1 comes out from Dynamite on June 11th. It’s by me, artist Fritz Casas, colorist Kirsty Swan and letterer Marshall Dillon, with Molly Mahan as editor and Jay Anacleto and Alé Garza on covers, as well as a retailer shared exclusive variant cover by Sergio Fernandez Davila.

Also, I wrote Clash of Queens #3-5 for Zenescope; issue 3 drops on April 30th. Then, I’m doing Grimm Fairy Tales vs. Wonderland #1-4; that starts in July.

I also have another thing that’s ready to come out, but I’m not allowed to talk about that yet. It’s different, that’s for sure.

And, of course, there’s Sparkshooter every Wednesday and Solo Acoustic (with art by Ben Olson) every Friday at www.sparkshooter.com. 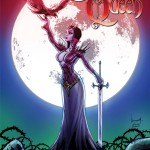 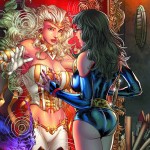 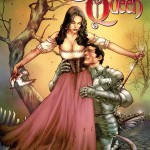 FS:  What’s more important to you as a creator?  The journey or the destination?  It’s obvious that you’re coming to creating comics as a guy who has loved these things his whole life; what’s the best part of being able to indulge your passion?

Brownfield: Overall, I have to say that it’s enormously weird. I’ve talked about this with Matt Brady. There are plenty of times when it doesn’t seem real, even when you have the completed issue in your hand. What, I sat in my chair and typed a bunch of words and people thought that they were okay enough to have artists and colorists and letterers work on them until editorial and production had this book to put together and sell people? Absurd! It just never gets old, and it never feels 100% real. Maybe that’s a side-effect of loving comics since I was a kid. It’s hard to believe that you get to do that.

But the journey can be great. I actually enjoy the act of writing, so that journey is an important thing to me. I love seeing the art come in. I love seeing the reaction. Ultimately, I guess I’m just kind of delighted by the whole thing.