Anyone who has followed cartoonist Ed Piskor’s work can easily glean that he has a passionate love of both comics and history. Look no further than to his opus Hip Hop Family Tree from Fantagraphics Books, which condenses decades of hip hop lore and makes it sensible to the uninitiated or those who only know the bare bones of the rise and evolution of the genre. Piskor applies that same love and sensibility to his remix and reexamination of the decades-long saga of X-Men characters, as seen in X-Men: Grand Design: Second Genesis #1, on sale now from Marvel Comics. 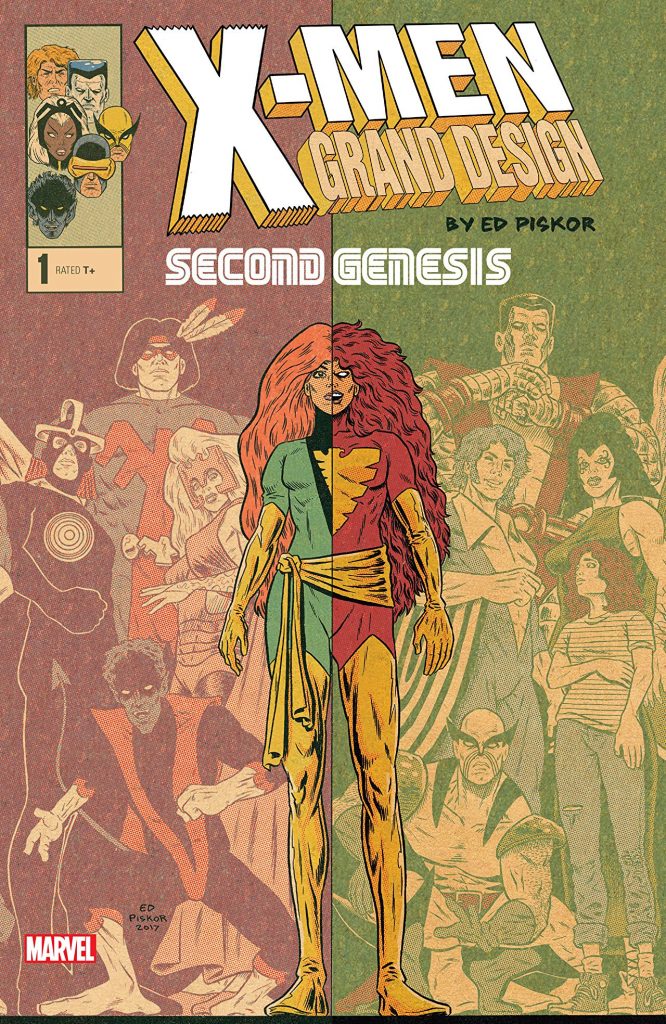 Second Genesis #1 is the debut issue of the second installment of Piskor’s three-chapter focus on the first 280 issues of Uncanny X-Men, spanning 30 years of stories. Second Genesis picks up where part one—X-Men: Grand Design—left off, starting with the introduction of the new wave of X-heroes that splashed into the X-Men’s world in Giant-Size X-Men #1 in 1975. Beginning with the introduction of the new wave of X-Men, including Storm, Nightcrawler, and Wolverine, Piskor throws the spotlight on those issues of Uncanny X-Men—often pointed to as some of the franchise’s most iconic stories—that showed the team go through growing pains and come together as a cohesive unit and, eventually, a family. The first issue concludes with a retelling of one of the series’ key story arcs, one that would influence the X-Men for years to come: The Dark Phoenix Saga, which sees the team’s Jean Grey being overwhelmed by the cosmic power of the Phoenix force, and watching as she makes a heart-wrenching decision for the good of life across the universe.

The care with which treats the X-Men—and, by extension, the creators who worked on the stories that are the focus of his remix—can’t be overstated. These stories have obviously made an impact and the man has done his research. He’s pulled in tidbits from every single issue of that run, whether large or small, in grand or subtle ways, to make certain that all of the stories originally put to paper get their proper due. (For the completist fan, Piskor has even added an annotated bibliography at the end of the issue for further reading.) 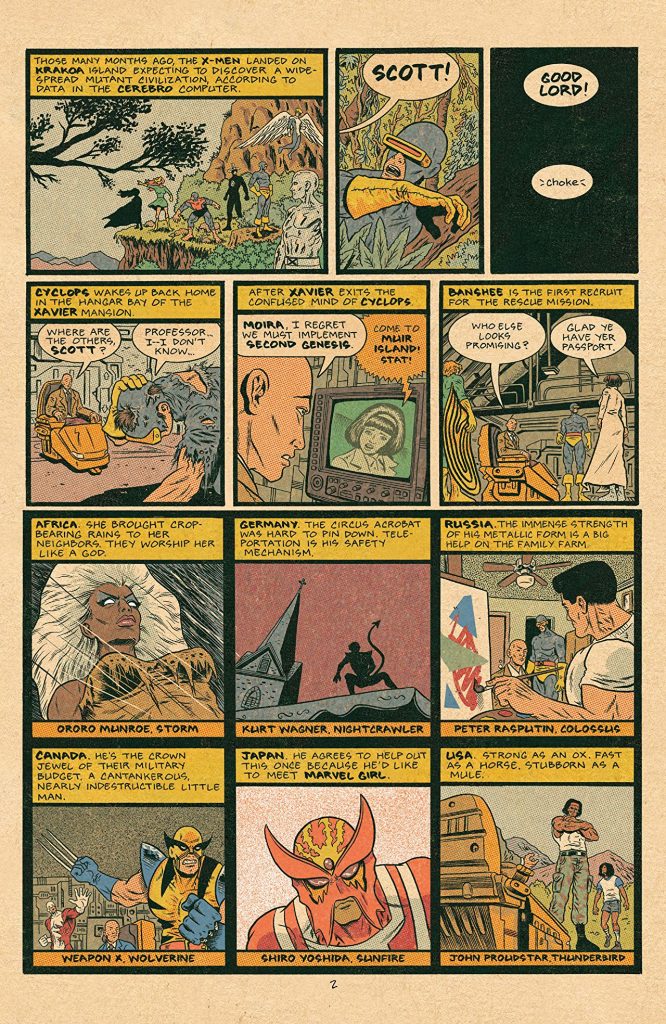 However, while he gives nods to the whole of the X-history of the era, Piskor does so in a way that serves to create a narrative out of those sometimes disparate stories in a way that makes sense. The fact of the matter is that Uncanny X-Men is/was a monthly comic book series, one that never was intended to end. As such, new tales had to be written and drawn every month, some that didn’t necessarily make sense in either tone or narration of any grand design (hence the book’s title). As the Phoenix saga was such a defining event in the X-Men’s lives, it’s natural that Piskor would gravitate toward that story as a unifying thread of the first two chapters—X-Men: Grand Design #1-2, which hinted at the coming of the Phoenix—and Second Genesis #1, which let that story more fully unfold and breathe.

In this way, much as he was with Hip Hop Family Tree, Piskor acts, in a way, as a sort of literary anthropologist, looking at the stories of the X-Men and weaving a story that tells the heroes’ tales in a way that stays true to what’s come before, while also looking for a why at the same time. 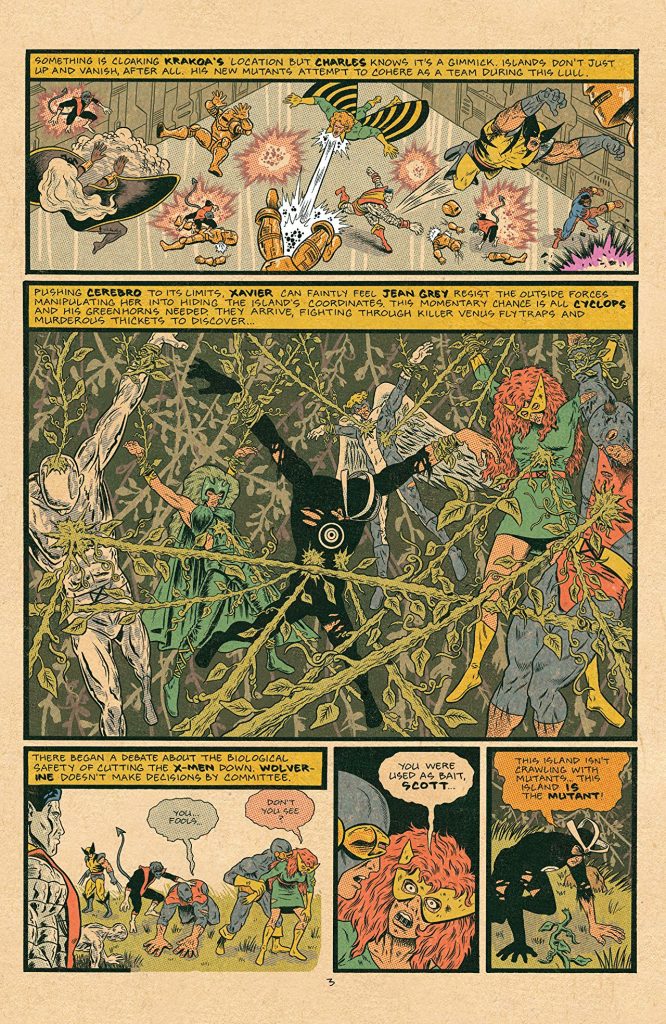 The real beauty of Second Genesis #1 and Grand Design as a whole, however, is that it’s the first X-Men book in a good long while that shows that it is absolutely possible to cater to longtime readers and eager new fans. For folks who grew up reading Cyclops, Wolverine, and the team’s first skirmish with the Hellfire Club, Piskor presents the story in a streamlined way that allows readers to traipse down memory lane and experience an old story in a new way. We can be reminded of why Scott Summers acts as he does and gain a new appreciation and new perspective by looking at older tales in novel ways.

For newer readers, Second Genesis and Grand Design are perfect gateways into the world of X. As noted, the X-Men cast of characters have existed for decades with a long and far-stretching continuity that can meander and be downright intimidating for the uninitiated. As Piskor has compressed that X-history and did a little judicious pruning, newer fans now have a tome to get caught up on X-Men lore without the weight of those decades serving as a barrier or an albatross.

But Piskor doesn’t just  ease new fans into the House of X by condensing its lore; he also does so by providing pitch-perfect characterization and dialogue that somehow manages to encapsulate who these heroes and villains are in just a few words and panels. From a smattering of Logan’s laid-back vernacular to Kitty’s earnest dialogue to Scott Summers’ over-the-top bluster, we know exactly who these characters are at this time in their history without pages of dulled exposition or decompressed storytelling. In fact, Piskor’s project may be the most compressed comic book storytelling avenue attempted, but, even with that compression, he lets his characters still breathe. 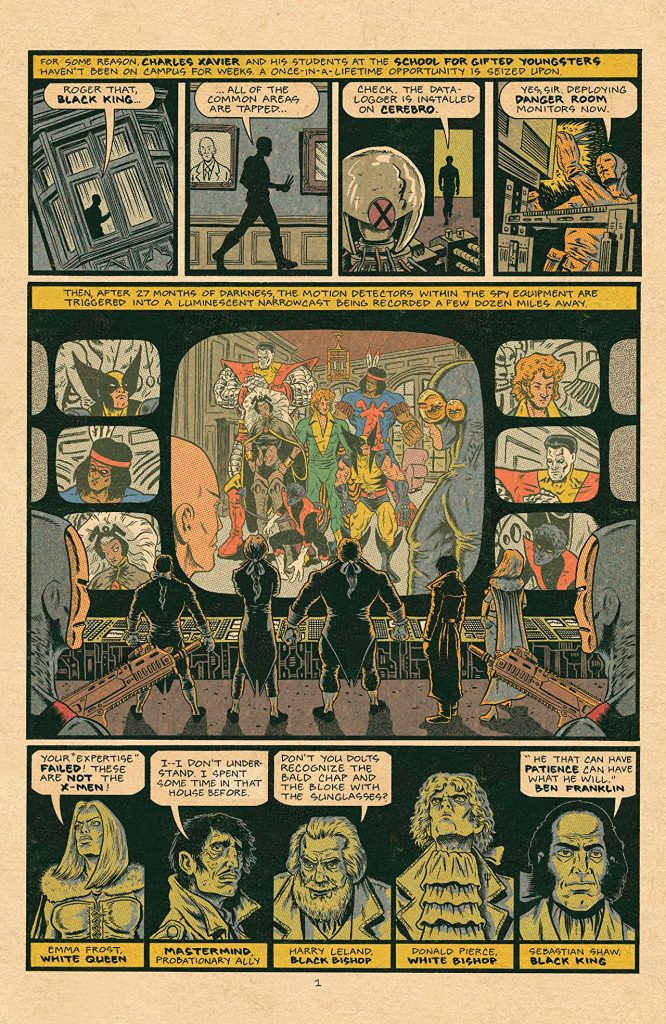 And that goes for his renderings of Marvel’s mutants as well. They’re given clear definition, but never feel stilted. Storm is always recognizable as Storm, but she always appears as the weather goddess her personality demands, a character too large for any page. Likewise, the Dark Phoenix is never anything but a terrible force of insatiable nature, and Piskor knows when to let that fiery fury cut across the page and when to pull it back. He’s noted on social media and in interviews that he wants every page of an issue to feel like a self-contained story, and this wouldn’t work so well if he didn’t keep order where it needs to be, and he does that nimbly.

With X-Men: Grand Design: Second Genesis #1, Ed Piskor showcases not just his love of comic history in general and the X-Men in particular, but demonstrates that there are still many untapped ways to experiment with the comic book medium that can both engage and enrapt readers. Piskor’s loving reverence for those elements is beautifully displayed on every page of the each issue he’s gifted readers thus far, and his care and craftsmanship only ramp up anticipation for his opus’ future installments.

X-Men: Grand Design: Second Genesis #1 (of 2) is on sale now from Marvel Comics.

It’s ALL-NEW and ALL-DIFFERENT! Witness Wolverine, Thunderbird, Colossus, Storm and Sunfire suit up as X-Men for the very first time all over again! All through the lens of comics auteur ED PISKOR, who lovingly researches, writes, pencils, inks, colors and letters every page just for you! The second act of X-MEN GRAND DESIGN begins now!

X-MEN: GRAND DESIGN: SECOND GENESIS #1 Is, Indeed, Grand & Extraordinary
Piskor’s loving reverence for those elements is beautifully displayed on every page of the each issue he’s gifted readers thus far, and his care and craftsmanship only ramp up anticipation for his opus’ future installments.
10Overall Score
Reader Rating: (0 Votes)
0.0