It would be easy to call Benjamin Frisch’s The Fun Family, on sale now from Top Shelf Comix, a take-down of the classic comic The Family Circus, with its art reminiscent of the long-running saccharine strip. However, upon closer reading, it’s abundantly clear that, while parody is on Frisch’s mind, the writer and artist has an eye at looking at the darker side of Americana and all that comes with it, warts and all.

Mr. Frisch spoke with me recently about the genesis of The Fun Family, his influences, and how political satire has shaped him as a storyteller.

FreakSugar: For folks who might be considering picking up the book, how would you describe The Fun Family?

Benjamin Frisch: The Fun Family is a dark comedy about a perfect newspaper-cartoon family. Robert Fun, the father, is a newspaper cartoonist beloved for his cute comic strip “The Fun Family,” drawn from his real family life. But real life is not a newspaper comic strip, and when things start to fall apart for the family each member looks for a new way to narrate their lives and cope with a strange and changing world. It’s a story about family, nostalgia, and the nature of work, among other things. 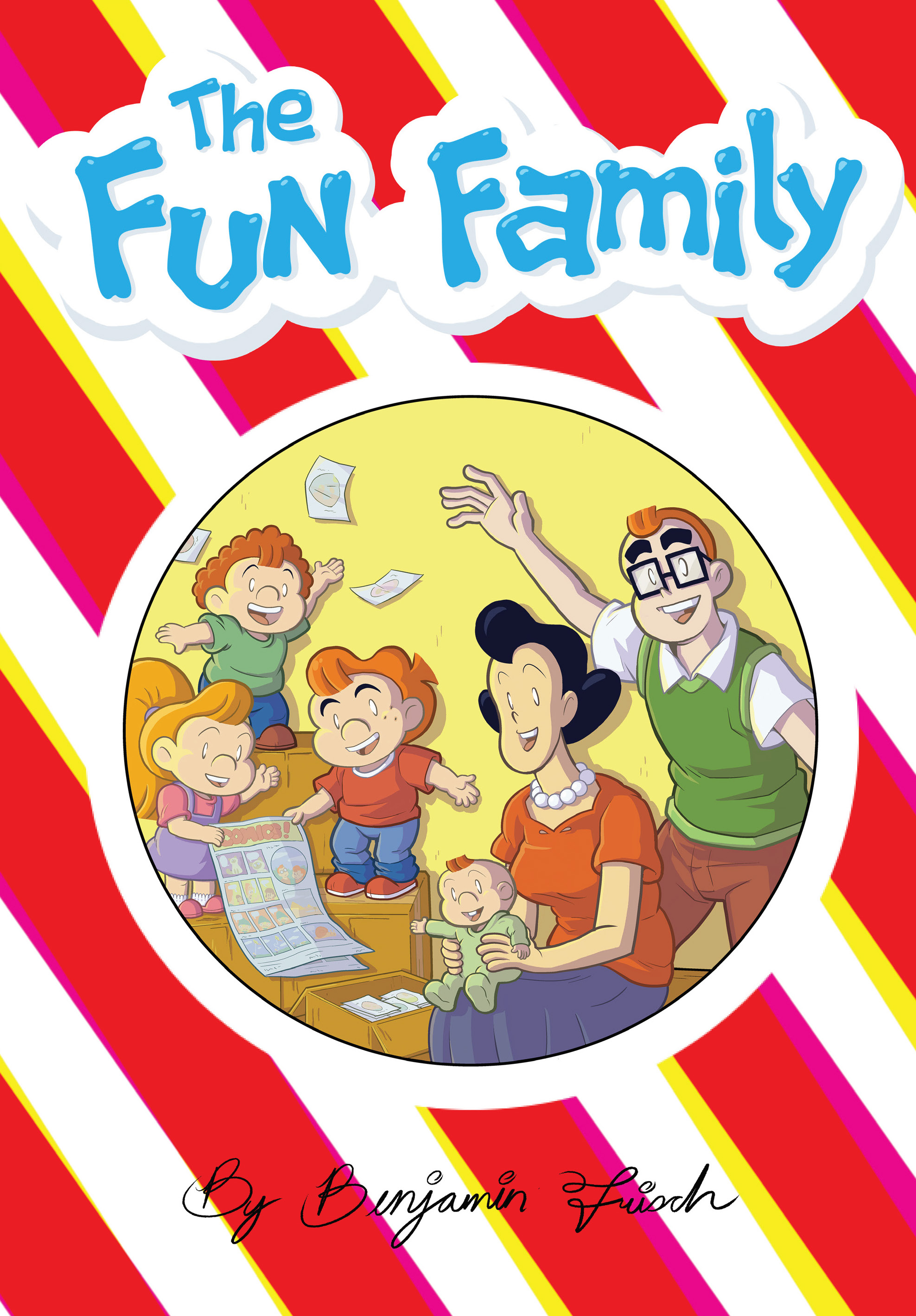 FS: Your background is in cartooning. While graphic novels are a huge leap from that medium, there’s a big enough a difference in what you can do in storytelling to allow you to stretch your legs a bit differently. What was the appeal for you to put your toes in the graphic novel waters?

BF: I tend to think of my background as visual storytelling, rather than something as specific as strips. I learned to draw by drawing short comics, but long-form work was always what drew me to the medium. I grew up on comic strips and while I remain a big fan of individual Calvin and Hobbes strips, it was always the multi-strip “arcs” that I loved the most. My personal taste also leans towards self-contained stories, so for me, even something like Ayn Rand’s Adventures, which was serialized in a strip-like way for Wonkette is more like a novella than a collection of individual strips.

Short comics are the best way to learn the medium and it’s what I focused on as a student. It’s much easier to learn from drawing and screwing up a lot of short things than ruining one long disaster. A lot of young artists have that massive project they’ve been dreaming up since they were young, but it rarely gets accomplished because long-form works take a certain amount of confidence and discipline that takes time to develop. 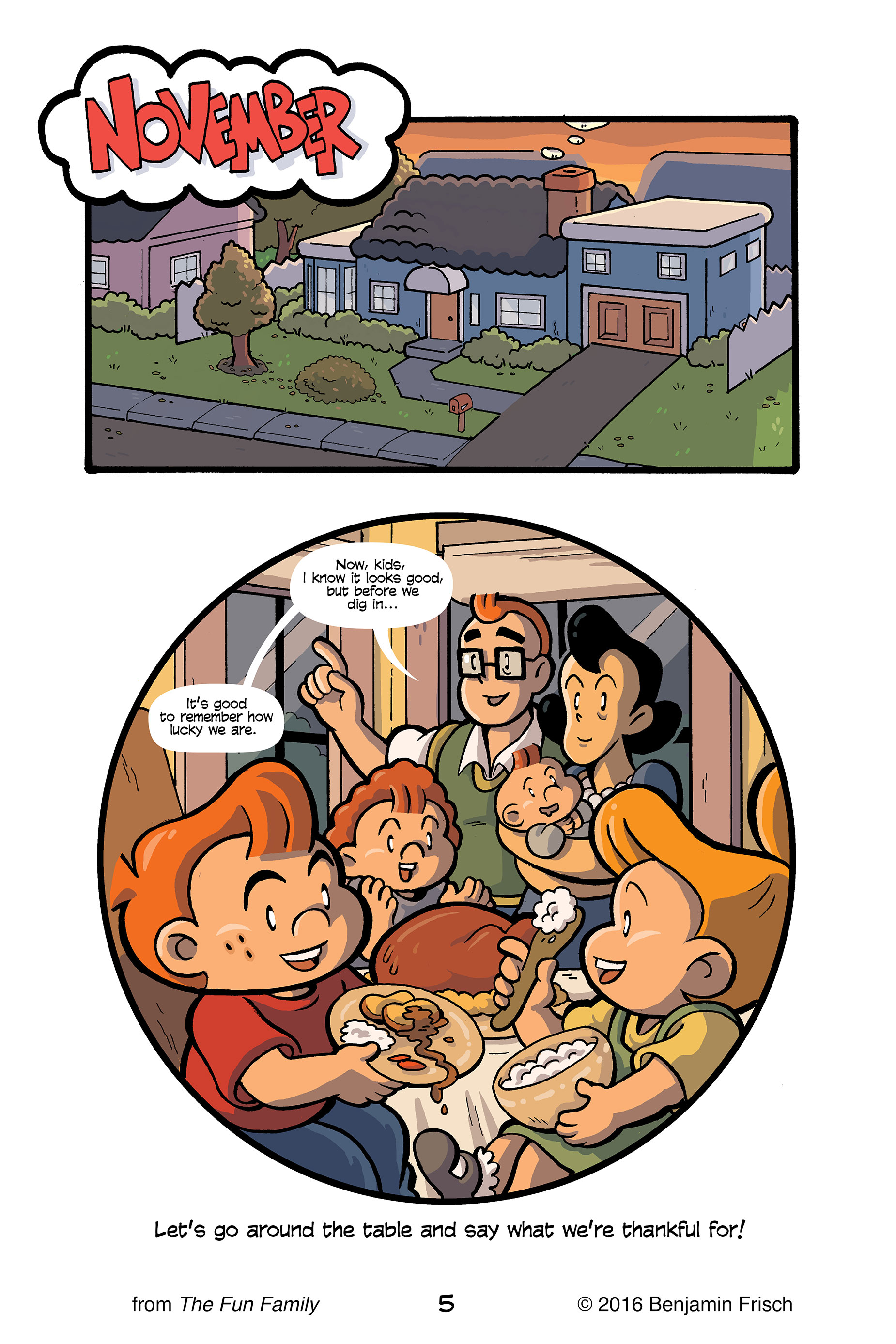 FS: The book has a very unique look and feel that marries wonderfully with the words. What made you decide on how you wanted The Fun Family to look?

BF: Thanks, I’m very proud of the look of the book. I had experimented with drawing comics in all different styles: cubism, medieval manuscripts, Greek pottery, kid’s drawings, etc. for a long time and so I was comfortable swapping styles per project. When I decided to do a story about a cutesy newspaper comic strip family, it seemed natural to draw it in a style inspired by that source material. One of the most exciting things about comics and animation is the ability to marry style and story in ways that resonate through the whole narrative. In comics, the art is the story, and so I knew I wanted to create ironic tension between the cutesy style and the more mature story. Not every story could use the same type of approach as The Fun Family, but for the right story, adopting an artificial style can be a really useful and fun storytelling device. 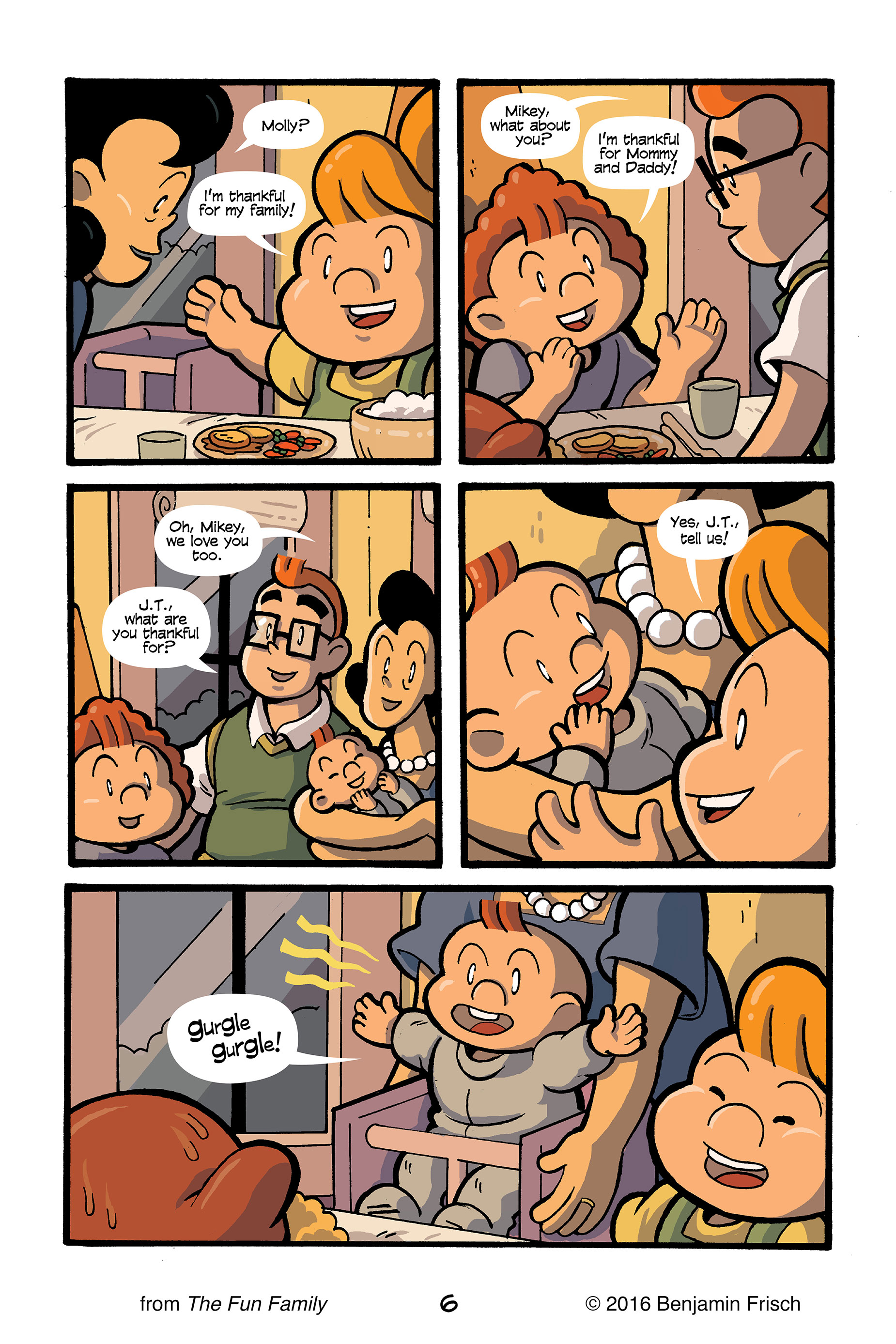 FS: Following up on that, I love the riff on The Family Circus which, frankly, always gave me a sugar coma whenever I read it. Was that nod intentional?

BF: Yes, absolutely. The Family Circus has some amazing unexplored premises like the “not-me” gremlins and the religious aspects of strip which suggest a kind of magical-realist world to me. My favorite unexplored premise serves as the basis for the story: that the father of the family in the comic strip is drawing the comic strip that you’re reading. Once I committed to the premise, the rest sort of blossomed around it, and it became its own story with its own aims. I don’t really mean it as a take-down of The Family Circus, many of those already exist, but it is a parody in a sense. I don’t usually use that word since “parody” often conjures the type of joke I’ve tried to avoid in the story, stuff that’s really gritty or raunchy, but it’s absolutely a parody in the technical sense since it uses The Family Circus as a jumping-off point. 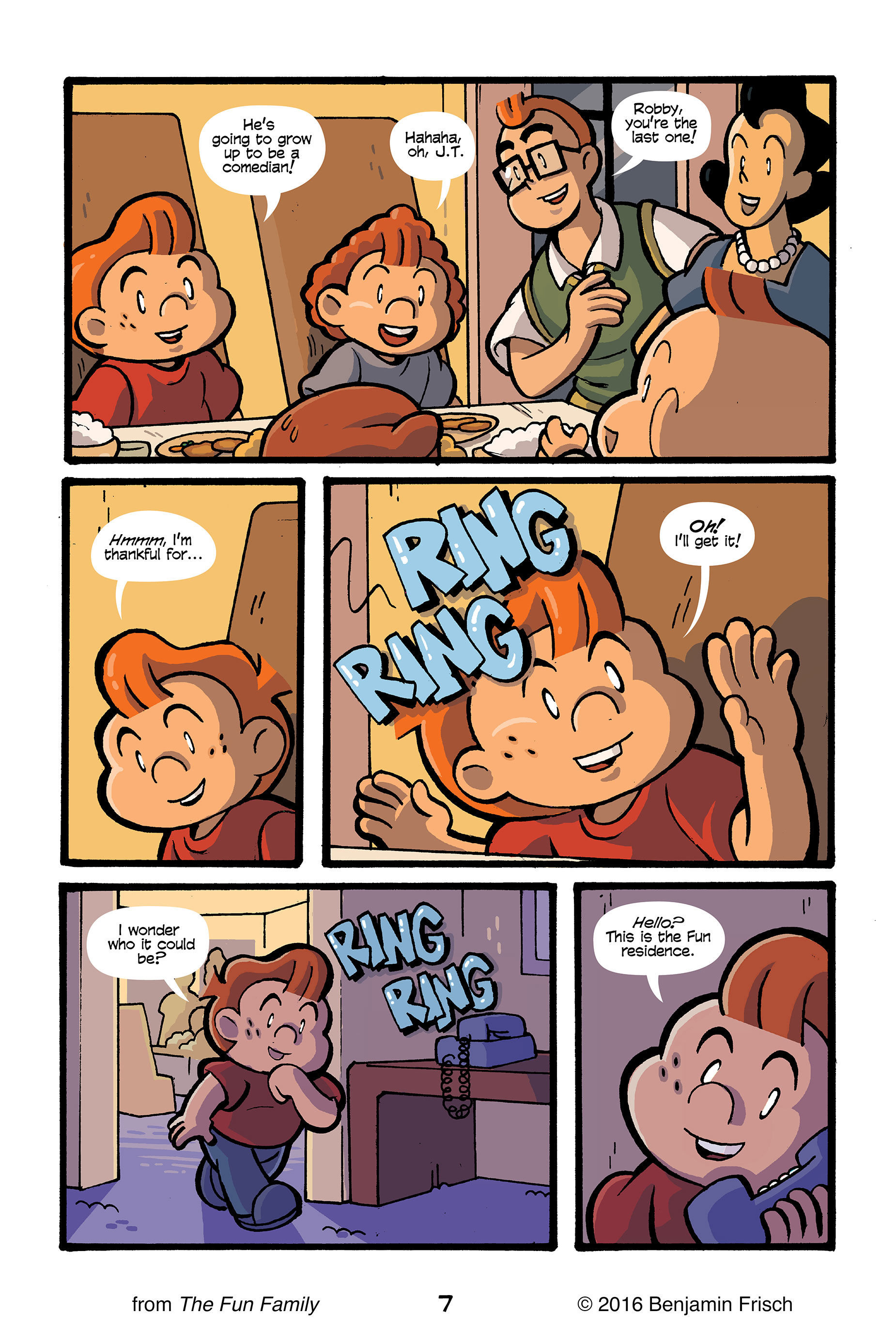 FS: What cartoons or comic strips, good or bad, do you feel have influenced your work?

BF: I grew up on Calvin and Hobbes and later discovered The Sandman in middle school, which was the series that made me want to draw comics. Like many I went through a manga phase, which probably arrested my artistic development for a time, but in the end it positively influenced my approach to style and the pacing of my stories. I later discovered independent and European comics, and they’ve all had an influence on me. Some of my favorite cartoonists and animators off the top of my head are Paul Grimault, Yoshiyuki Sadamoto, David B., Nicolas de Crécy, Dave Mckean, FSc, David Mazzucchelli, Moebius, Jeff Smith, and Hayao Miyazaki. I was also lucky enough to school with some incredibly talented cartoonists who are doing amazing work right now, especially Coleman Engle and Becky Dreistadt, who’ve had a huge effect on my artistic development.

FS: You’ve contributed to Wonkette and NPR, delving into political satire. What appeals to you about political satire and how has it shaped who you are as a storyteller?’

BF: I follow politics probably too closely, so it appeals to my interests and it’s a pretty natural mode for me to work in. My favorites are probably the BBC series The Thick of It, and the movie Network.

I do think political satire is in a strange, difficult place right now. Satire relies on exaggeration, and conservative politics is so self-parodying that when exaggerated it becomes so completely absurd it becomes divorced from reality. The other option is to just re-represent politics as it exists, which risks becoming the thing it wants to critique. When a reading of Donald Trump’s tweets works as a regular comedy segment (as on the great podcast Trumpcast) it sort of negates the traditional function of satire. There are still plenty of things to satirize, of course, but politics seems especially difficult to do well at the moment. 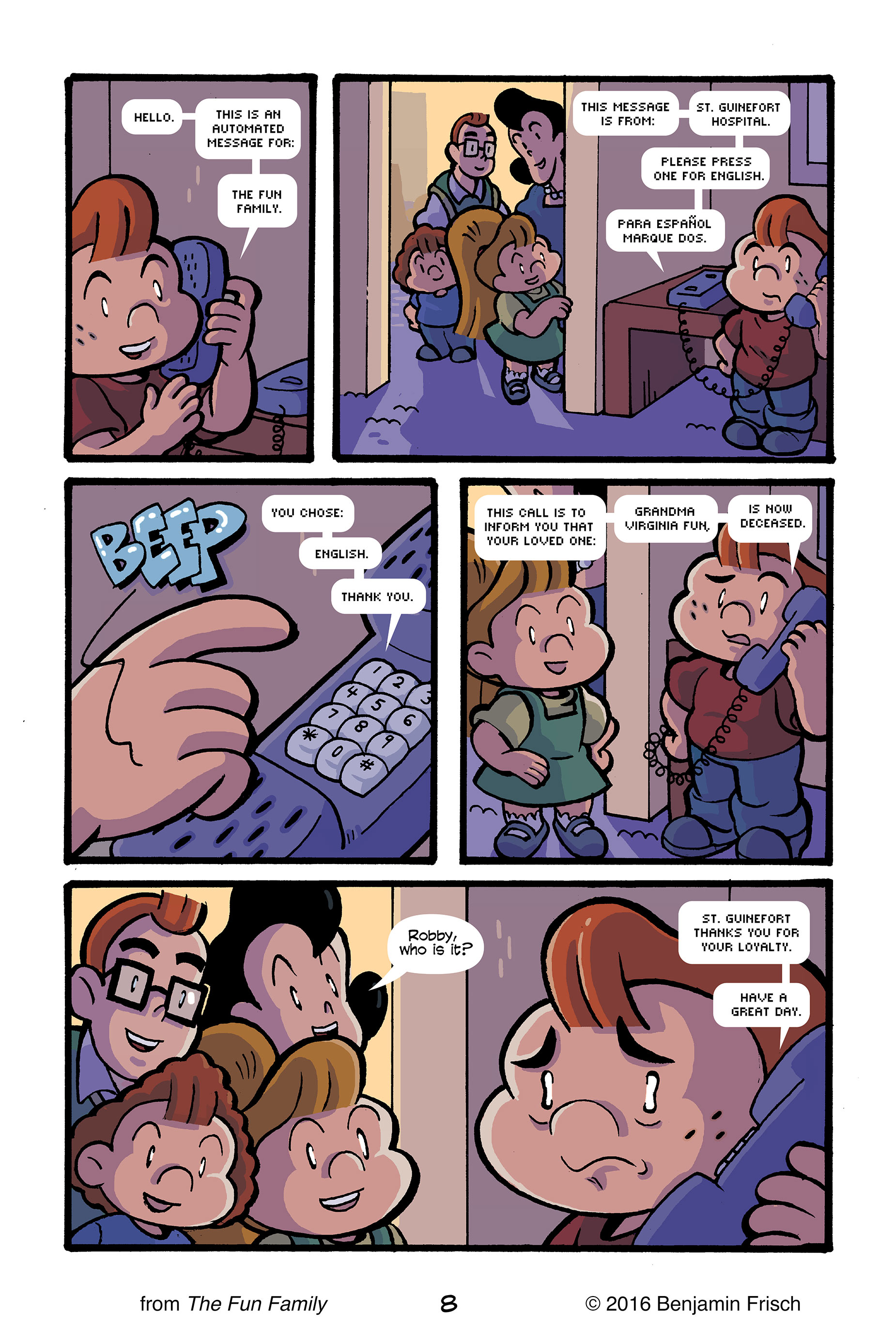 FS: What’s your process like when you sit down to work on a project like this? Is there a particular headspace you need to be in?

BF: A project like The Fun Family is a huge all-encompassing thing for me. It’s not so much about headspace, rather, I just need to have confidence in the story and know that it works on some level, from beginning to end before I really commit. Once I do have that confidence, I can just do it, which is the easy part. I work very systematically, which just takes time and dedication to execute. I still feel like I have no idea what I’m doing, of course, but doing it one day at a time keeps it manageable. The ideas I’ve been working on since finishing The Fun Family haven’t reached that level yet, which can be frustrating, but it’s sort of just how it goes for me.

FS: Do you have any other projects coming down the pike?

BF: It’s nowhere near the scale of The Fun Family, but I have a short, straightforward adaptation of Oedipus Tyrannus in the upcoming Graphic Canon of Crime anthology from Seven Stories Press that I’m really proud of. I tried adapting an overly ambitious meta-version of Oedipus into a full-length graphic novel for a long time, before The Fun Family, and no publisher was ever interested in it, so this feels like a nice little return to that story.

FS: What do you want to be central takeaway for readers after reading The Fun Family?

BF: I don’t want to be specific because I like to let people have their own interpretations of the story, but I hope people come away from The Fun Family with a strong emotional reaction. I used to do a lot of work that was academically interesting, but emotionally dead, and I realized that I ultimately wanted to affect people, and ideally change the way people see the world in some small way. People seem to have strong opinions about the book, which is good, and intentional, so I’m pretty happy with that.

The Fun Family, written and drawn by Benjamin Frisch, is on sale now from Top Shelf Comix.