“The first two issues of Black Cloud are whirls of fast-paced neo-noir that blur the lines of its own surreal narrative with deft storytelling and whimsical color.”

Comic publishers can be pretty guilty when it comes to riding trends for popular types of genre-based concepts.  Readers have been inundated with domino masks, capes, herds of zombie as well as a slew of post-apocalyptica du jour books over the past several years.  There have been some  crime fiction stories and a western or weird book here or there; but there hasn’t been anything quite like Image Comics’ Black Cloud.

The first two issues of Black Cloud are whirls of fast-paced neo-noir that blur the lines of its own surreal narrative with deft storytelling and whimsical color. 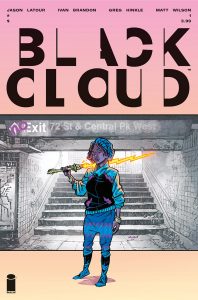 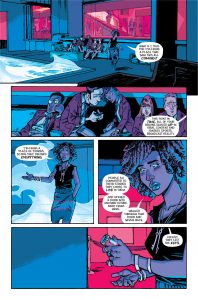 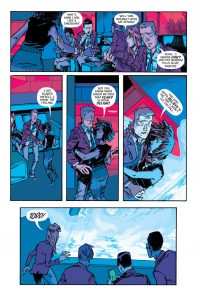 What can you expect?  It’s written by two of the best genre writers currently publishing indie comics. Writers Jason Latour (Southern Bastards) and Ivan Brandon (Drifter) have partnered with artistic talent Greg Hinkle (Airboy) to create a wildly creative pair of colliding worlds with an intriguing protagonist, Zelda, who mysteriously bridges the two realities together. Further, Hinkle’s work on Black Cloud  continues to cement his ability as one of the most fluid sequential artists in modern comics; his talent stretches the boundaries of readers’ imaginations as they enter a dreamy world just beyond the gritty reality established early on in the first issue.

It goes without saying that Hinkle’s work is only further enhanced by the stylish pallet of colorist Matt Wilson. Wilson’s strength as a colorist on Black Cloud resides in the powerful transition from the naturalistic earthy tones grounding Black Cloud’s reality to the strange wash of neon blues, greens, and pinks that begin to stylishly bleed readers into a realm that exists just outside of their grasp. 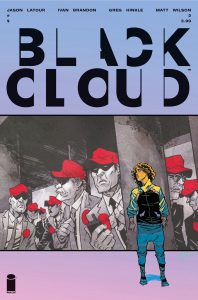 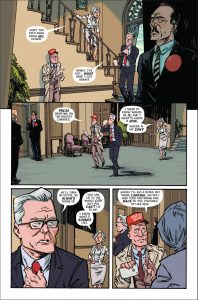 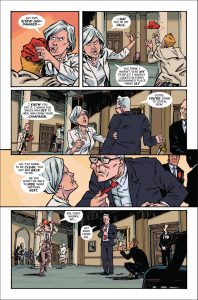 Without spoiling much, Black Cloud’s pacing is very fast and the story very generously allows readers to draw their own connections to the mysterious Zelda and her charge, Todd, who has been whisked into Zelda’s exotic realm of existence at the behest of his father who is running for political re-election. Zelda and Todd both appear to be ne’er–do–wells in their respective realities as Zelda struggles to help Todd find his bearings in his new existence outside of the reality he knows.

Some of the visual pyrotechnics of Black Cloud’s two realities might remind you of cinematic worlds like Inception or mind-bending finale of Saturday Night Special  as the two worlds in the story blend together in all of its raging Technicolor glory. Mind you, this is not a criticism of Black Cloud…it’s high praise. Black Cloud may bend the edges of reality but there is also a wealth of solid visual cues that make this comic socially relevant in the best possible way with glaring hilarity and the message of “DREAM HUGE”.

Don’t miss out on what is sure to be one of the first Eisner contenders of 2018.

1-2 Punch: Black Cloud Scintillates
This edition of 1-2 Punch features a spoiler-free advanced review of Image Comics' upcoming Black Cloud #1 and #2 by Jason Latour, Ivan Brandon, Greg Hinkle, and Matt Wilson. Ekstrom rates BOTH issues of Black Cloud a 9.5 out of a possible 10. Black Cloud #1 hits shelves on April 5th. The cut-off for final orders for the issue are on March 13th.
9.5Overall Score
Reader Rating: (1 Vote)
10.0