Fans of the Aliens franchise have more than just the film series to sate their appetite for all things xenomorph. From books to video games to toys to comic books, there’s a whole bevy of options to further explore the wider universe that director Ridley Scott sparked in 1979. This September, Dark Horse Comics will kick off a new tale in the Aliens world: Aliens Colonial Marines: Rising Threat, by writer Brian Wood, artist Werther Dell’Edera, and an entire team of creative talent. Based on the upcoming video game by Cold Iron Studios, Rising Threat follows Olivia Shipp and her squad of Colonial Marines who answer a distress call from an orbital refinery. What they find there will transform their world—most likely not for the better.

Wood is no stranger to the Aliens franchise, having written several other dynamic series for Dark Horse. Further, Werther Dell’Edera brings a rich background to the book, working on everything from Spider-Man: Family Business to The Crow: Memento Mori to Punisher War Journal.

Brian Wood and Werther Dell’Edera spoke with me recently about the conceit of Aliens Colonial Marines: Rising Threat, what appeals to them about working in the Aliens universe, collaborating with Cold Iron Studios to bring the comic to life, and what to expect to see in the series moving forward.

FreakSugar: For folks checking this out, what can you tell us about Aliens Colonial Marines: Rising Threat?

Brian Wood: The basics are as follows:  Rising Threat is an 8-issue series that builds out of my other Aliens series, Defiance, Resistance, and Rescue.  By that I do not mean it’s a sequel, and there is no required reading order for this.  But it’s all part of the larger tapestry that we, Dark Horse, Fox, and Cold Iron have been building over the last few years.

Werther Dell’Edera: I can only say that it’s damn cool! A lot of characters, a lot of situations, a beautiful dog!

FS: Rising Threat introduces Olivia Shipp, a leader of Colonial Marines. What can you tell us about her and the supporting cast of Marines?

BW: When we meet Olivia in the comic, she’s a corporal heading up a small squad of Marines coming off a long deployment.  By long I mean LONG.  They have been in deep space far past what any of them signed up for, but this is what things were like for the Colonial Marines at this point: underfunded, understaffed, and overextended.

En route back to earth, Olivia happens intercept a distress call from a nearby Seegson-operated orbital refinery, and as per standing orders, they are obligated to render assistance.

Olivia’s a fun character to write.  Well, really all the Marines are – these darkly humorous people with iron clad moral codes and heavy weaponry.  Olivia herself is young, but with that feels like multiple lifetimes of experience under her belt.  She actually appears first in the young adult novel Alien: Echo that was published a few months ago.

WD: I met her on these pages for the first time and it has been love at the first sight. Beautiful character! I hope to have given back some of her beauty and coolness with my art. 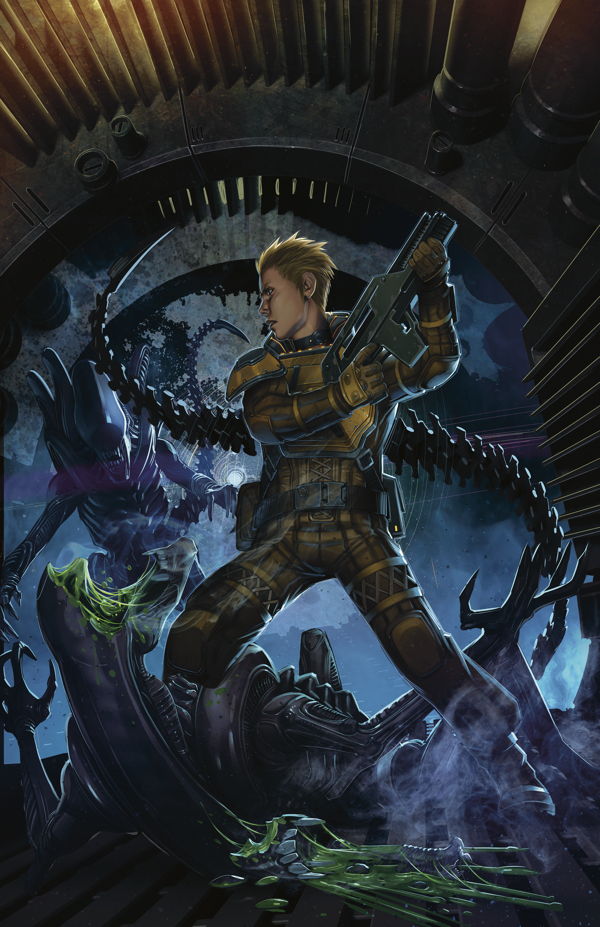 FS: Brian, this isn’t your first foray into writing for the world of Aliens. For both of you, what is it about the Aliens world that appeals to you and stokes your creative fires?

BW: To put it really simply, Aliens is cool.  I think it’s really my favorite sci-fi universe, it really ticks all my boxes.  I like the survival aspect of it, military aspect of it, I like the corporate corruption part of it, the deep space setting, and I love how its roots are in showcasing these blue-collar type characters.  I loved that about the original film, and still do.

WD: I’m a big fan of the Alien saga and Ridley Scott. I think we are talking about of some of the greatest sci-fi movies ever made. I think that the greatness of Alien is that mix of big space opera and working-class hero stories. When you put them together you lose all that glossy aspect that sometimes sci-fi has and everything looks more real, more near to us and our time that we can start to think that it could really happen.

FS: Rising Threat focuses on the early years of the Colonial Marines. What is the shape of the world they find themselves in, as well as their headspace as Marines in a world sometimes filled with sci-fi terror?

BW: Well, Earth at this time is rapidly expanding into deep space.  Too rapidly, probably, a bit recklessly.  The Colonial Marines exist to help keep things under control, but they aren’t built up enough.  So, the status quo for them is a lot of running around dealing with crisis’ as they come up.

I love that about them, at this point.  They’re scrappy and resourceful.

FS: This series ties into the events of the upcoming Cold Iron Studios video game. What was the process like of making that connection? Was there communication between the creative team for the book, Dark Horse, and Cold Iron Studios?

BW: Yeah, there was a lot of phone calls, a lot of shared documents, and Fox is there to help facilitate all of us working together.  Titan Books is a part of this as well, they have some upcoming novels that feature Amanda Ripley and Zula Hendricks, the character Tristan Jones and I created for Aliens: Defiance.  I’ve had phone calls with those writers, and I’m doing a little writing on the video game.

It’s really ambitious, this level of collaboration, but its working because no one is so close to anyone else in the timeline to be stepping on toes.  I think that’s also good for readers as well.  No one is “feeding into” someone else’s work.  We’re all doing our work that’s fully on its own as well as a volume in a much larger narrative.

WD: As Brian said, it’s a really cool collaboration here. I’ve personally had no part in the writing process. So, I don’t know how difficult could be to put together something like this, but I really enjoy being a part of it.

FS: Werther, what was the process like creating the world of Rising Threat, drawing on other comics and movies of the Aliens franchise while still making the book your own? What was the back-and-forth like with you and Brian?

WD: Well, things are going on as fast as the story does. The world we are building is literally growing up page by page. References in this process are the fundamentals of the Aliens universe. I have something like four Alien art books (from movies to games) always opened on my desk. I always take a look at the pictures and other comics and movies, to find that piece of technology that could fit the scene I’m working on, or that I can use to create that new piece of technology that I need. Everything is pretty cool in the process of creating old school sci-fi. Generally, Brian says “mh!” (that usually means “good”) and I say “mmh.” (that means “Thank you!”).

BW: We have a pretty cool mid-series twist and pivot that really expands this story into something much larger than what it initially appears.  Stick around for it.

Tying into the events from the upcoming Cold Iron Studios video game, this series delves into the formative years of the Colonial Marines. Introducing Olivia Shipp, leader of a squad of battle-weary Marines who have defied orders to rescue the survivors of a refinery under siege.