This past weekend, Chicago saw the third annual CAKE (Chicago Alternative Comics Exposition) show, held at the Center on Halsted just around the corner from Wrigley Field. This was the first year it was expanded to two days, and the show also took up a greater amount of floor space for exhibitors than in previous years which was needed for the 10% attendance increase over 2013. The featured guests included: Anya Davidson, Inés Estrada, Edie Fake, Lizz Hickey, Hellen Jo, Tony Millionaire, and Nobrow.

One of the best things about any convention like this is the collection of less publicized, but certainly not less talented, creators. There were  plenty of individuals tabling at the show who are doing fantastic work, but don’t often get the publicity they deserve. Wandering up and down the aisles at CAKE affords a great opportunity to see a wide variety of talent. And because the show is very much one focused on comics and not pop culture, the stories and art that are available tend to be more personal in nature. Sometimes that does indeed mean the memoir of someone who dealt with a variety of issues when they came out of the closet, but it could just as well be something that doesn’t look too far removed from Adventure Time. But the key is that they’re decidedly more personal projects showcasing creators’ personal visions, and generally not works that were created specifically as a commercial endeavor. 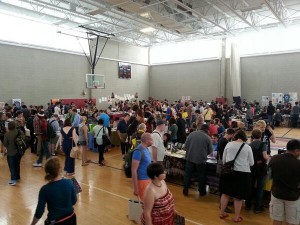 CAKE is, in fact, a very personal show. The way the floor is laid out, every exhibitor is on a pretty even footing. Even the larger publishers in attendance like Fantagraphics and Top Shelf have fairly minimal booth setups, so looking across the event, there’s a sense that no one is tying to out-sell each other, but they’re really all there just to support comics as a medium. And that also means that creators sitting at tables are immensely approacable, and are often quick to engage in conversation.

Chicago has a pretty robust comics scene, and so there’s plenty of local talent to draw from. But further, that means that there’s a equally robust fanbase. It was easy to note that a lot of fans showed up specifically to support someone they personally knew. With the added bonus of coming across other creators whose work also appealed to them.

The show had six panels this year, ranging from a personal spotlight on Tony Millionare to a panel discussing the increasingly popular idea of comic book readings and how those performances can enhance both the works being read as well as how the readings themselves can influence a creator’s future work. I found all of the panels interesting and well-moderated. The range of topics was well-considered, and all of the panels seemed to also be well-attended.

One of the things that struck me about the show was how well sized it was. There was enough to do over the two days that I never felt like there were huge lulls between events, or that there wasn’t enough going on to justify a whole weekend. But at the same time, it wasn’t so much that I felt rushed over the two days. At the same time, I think someone could, if they wanted, breeze through the whole show and hit most everything they wanted in a single day without feeling as if they missed a substantial portion. It will be interesting to see how the show continues to grow, and whether that’s something they’re able to maintain.

From talking with some of the volunteers there, though, and seeing the after-con survey they’ve sent out, the organizers are clearly working very hard to make CAKE the best show it can be. Not the biggest show, and not the best pop culture con, but the best alternative comics show it can be!