Johnny Red #2 is an “end of the beginning” comic, and tends to feel like the second half of issue 1, ending just as the main storyline begins. Still, the stage is now nicely set, the actors properly placed, and I’m excited to see the show, so – play on!

The second issue of Garth Ennis, Keith Burns. and Jason Wordie’s Johnny Red (Titan Comics) continues to impress. “Mrs. Redburn’s Little Boy” finishes the reader’s introduction to Johnny and Falcon Squadron with an abbreviated history of both up until the Battle of Stalingrad and the autumn of 1942. The back story here is immediately familiar from the original Johnny Red feature in Battle Picture Weekly (or the Titan collected editions of the same). Once again, the ancient Popovich acts as narrator for this history, with the book shifting smoothly into immediate dialogue and action in 1942 once Popovich has brought the tale to the proper point, and the main storyline for this limited series begins. As it does so, Ennis introduces two more characters: the rotund, angry, putative CO Yaraslov; and Captain Nina Petrova, a female combat pilot, and commander of the squadron of Po-2 biplanes being used to drop supplies into the besieged city, all of which are piloted and crewed by women. Both characters have their origins in the original comic, and Petrova in particular is poised to play a major role in the arc going forward. 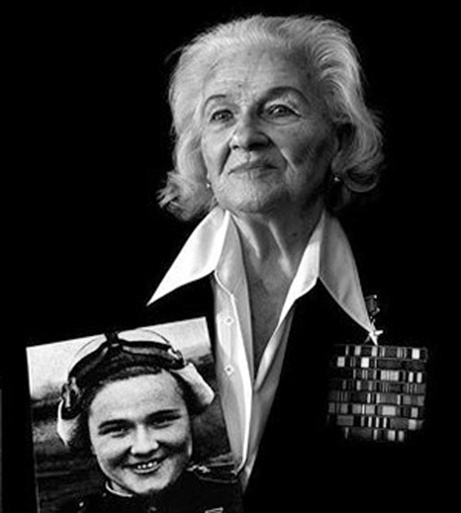 The possible inspiration for the fictional Captain Petrova, the very real Nadia Popova: Hero of the Soviet Union, Gold Star, Order of the Red Star, Order of Lenin – Night Witch, total and complete badass, shortly before her death, at age 91, in 2013.

It’s worth taking the time for an extra word or two about Petrova and her squadron mates. As in the original comic, Ennis has her unit standing in as a representation of the 588th Night Bomber Regiment (later given elite unit status as the 46th Guards Regiment). Like Petrova and her comrades, the 588th flew Po-2 biplanes at Stalingrad, and besides delivering supplies also specialized in night bombing raids and strafing runs against the enemy. The Germans called them nachthexen, the Night Witches, because of their tactic on night time raids of climbing their little biplanes high, cutting their engines, and gliding down upon the unsuspecting Germans before delivering their payloads. To the Wehrmacht troops on the ground they literally seemed to appear from nowhere in the darkness, raining death. The 588th fought until the end of the war, and by that point was not only a Guards Regiment, but included no fewer than twenty Heroines of the Soviet Union, the USSR’s highest military honor. As for the original Nina Petrova, created by Tom Tully and Joe Colquhoun, Garth Ennis has noted her importance to him personally: “I was eight years old, coolly confident in the knowledge that girls did not fly aeroplanes, did not fight in wars, and did not hit boys… Yet here was Captain Petrova to knock my callow preconceptions flat, as decisively as she had my favorite comic strip hero.” Ennis would go on to script his own Night Witch, Anna Kharkova, for his Battlefields series (Dynamite 2008 – 2014), so it is no surprise that Captain Petrova should appear as a major character in his own run on Johnny Red.

Keith Burns and Jason Wordie continue to work brilliantly together. Burns’ overall design for the most part eschews traditional panels and gutters in favor of superimposed panels over splash pages or two-page spreads, and this issue contains some breathtaking examples of both. Burns’ combination of sharp detail and loose lines gives character to both people and machines, and his use of blacks gives even the most detailed scenes an impressionistic, and very mobile feel. Wordie’s palette continues to focus largely on muted browns, olives, and oranges which perfectly evoke the skies and landscape of the Russian fall, and the mud and the grime of forward airfields and combat fatigues. The two remain one of the most impressive artist & colorist teams this correspondent has ever had the pleasure of reading. 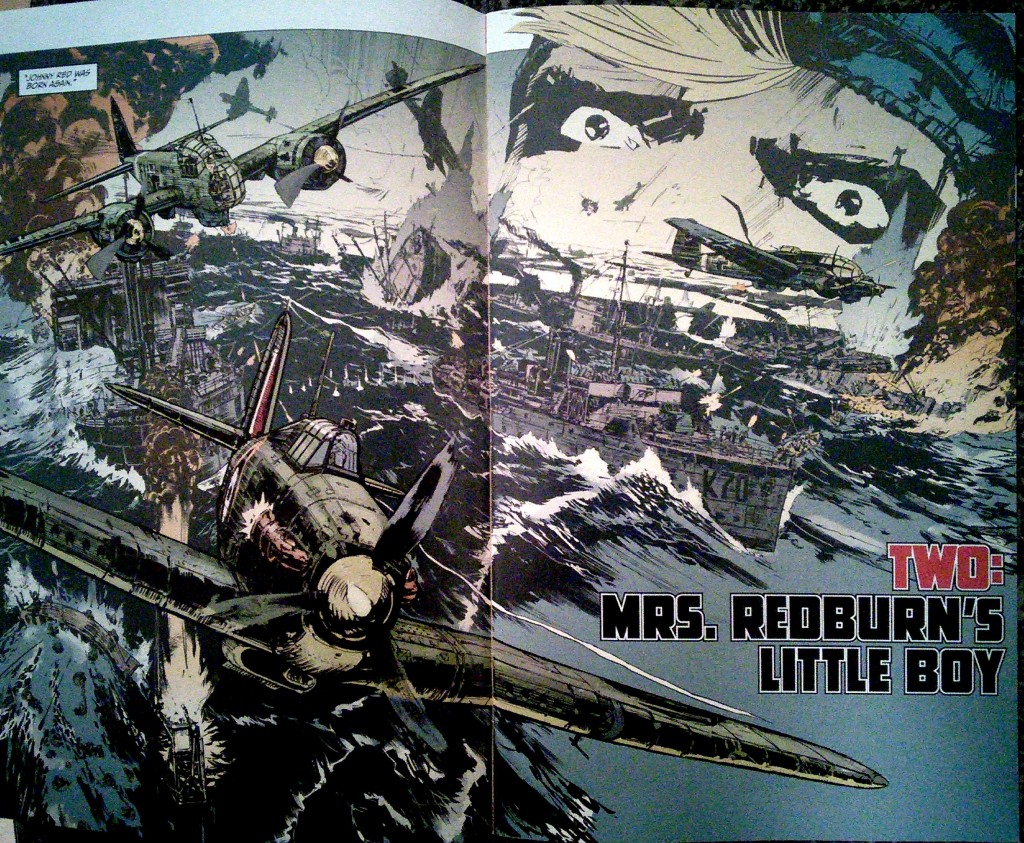 All of the above high praise having been said – and deservedly so, Johnny Red #2 remains an “end of the beginning” comic, and tends to feel like the second half of issue 1, ending just as the main storyline begins. In the modern age of comics, floppies are no longer the primary market, of course, so when the trade collection of Johnny Red comes out issues 1 & 2 will flow nicely as one piece, but this correspondent always gets a bit ticked when the “ultimately this will be a trade because that’s where the money really is” design constraint becomes annoyingly obvious. Still, the stage is now nicely set, the actors properly placed, and I’m still excited to see the show, so – play on!

C'est la Guerre: Review: Johnny Red #2
Johnny Red #2 is an "end of the beginning" comic, and tends to feel like the second half of issue 1, ending just as the main storyline begins. Still, the stage is now nicely set, the actors properly placed, and I'm excited to see the show, so - play on!
8.5Overall Score
Reader Rating: (0 Votes)
0.0