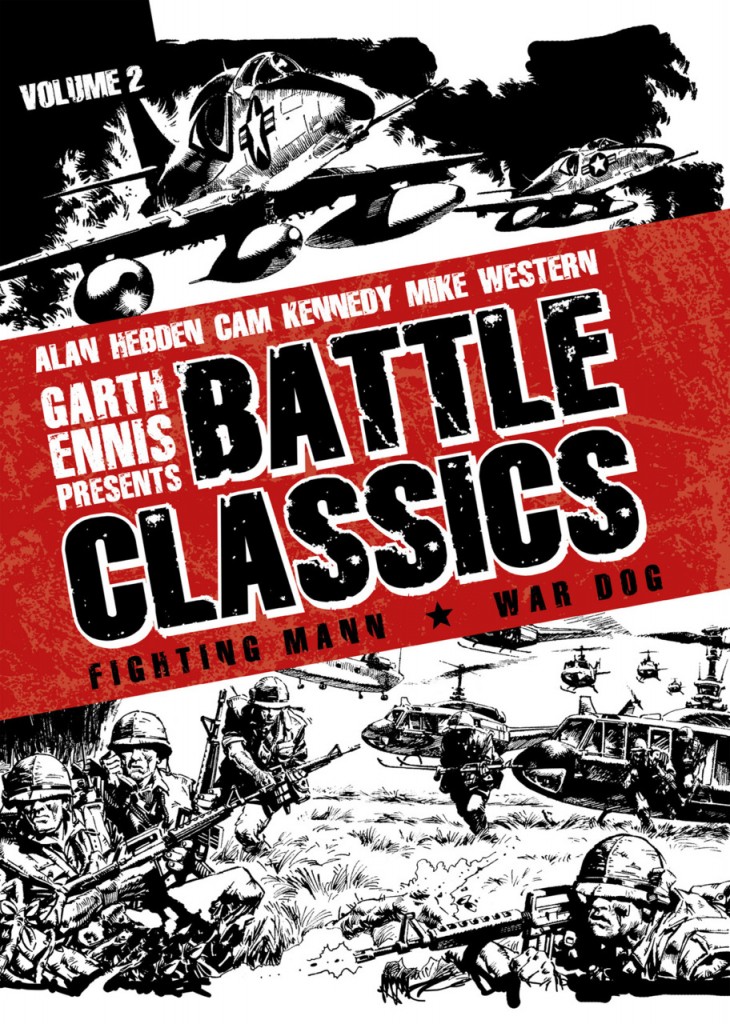 Titan Comics is on a mission. Fortunately, part of that mission is reprinting the greatest comics from the British war comics magazine Battle. Recently I raved about their fourth volume of Johnny Red, and now I find myself in the same positon with Battle Classics, Volume 2. Technically that should be Garth Ennis Presents: Battle Classics, Volume 2, but that’s just a bit unwieldy. Ennis is curating these collected editions, but as he explains in the afterward to Volume 1, beyond the introductions and so on he has absolutely nothing to do with the work presented between the covers. In fact, what Titan is reprinting are the comics that Ennis read as a boy. However, despite the unquestionable excellence of the stories in each volume, they remain less well known than the major, longer-running Battle pieces like Johnny Red and Charley’s War, and Titan felt that, without the market appeal of Ennis’ name, they couldn’t risk publishing these stories. Thankfully, Ennis agreed to lend his name to the effort, because these are some of the best war comics ever produced, and they deserve to be back in circulation. 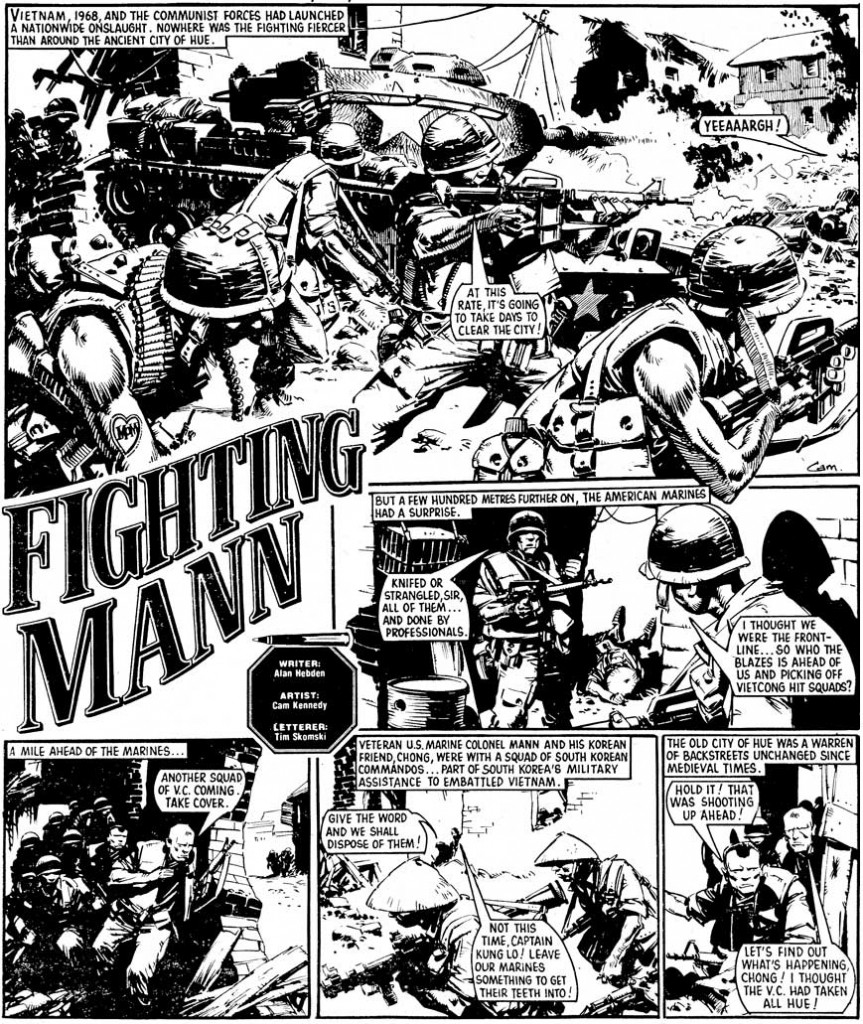 Battle Classics, Volume 2 features Fighting Mann, a Vietnam War tale scripted by Alan Hebden (The General Dies at Dawn, Major Eazy, Meltdown Man) and drawn by Cam Kennedy (Judge Dredd, Rogue Trooper). The script is tight, as any story told in three page increments needs to be, and focuses on retired US Marine Corps Colonel Walter Mann as he searches for his son, a Navy aviator who has gone missing near the South Vietnam/Laos border. The series hinges on fast paced action sequences, which Hebden and Kennedy keep coming one after another. Kennedy’s art is meticulous, and his equipment and vehicles are astonishing in their accuracy (with the exception of a couple of US fighters which in reality were not equipped with guns, but which needed them for reasons of plot). Mann is accompanied on his quest by his old South Korean friend Chong from the previous war, and aided by a host of old Marine buddies who are still on active duty as senior field officers. This allows Hebden to move the story all around the theater of war from Hanoi to Laos to India to Cambodia to Saigon. Along the way, the reader spends time at the Battle of Khe Sanh, in Hue city during the Tet Offensive, and aboard the USS Forrestal during the tragic fire that crippled the carrier. The story is fictional, but the background is very real and very accurately rendered. While Mann’s quest sometimes stretches the bounds of possibility, the writing and art pull the reader in completely, and Kennedy’s work is a visual feast to satisfy the most demanding artistic palate. 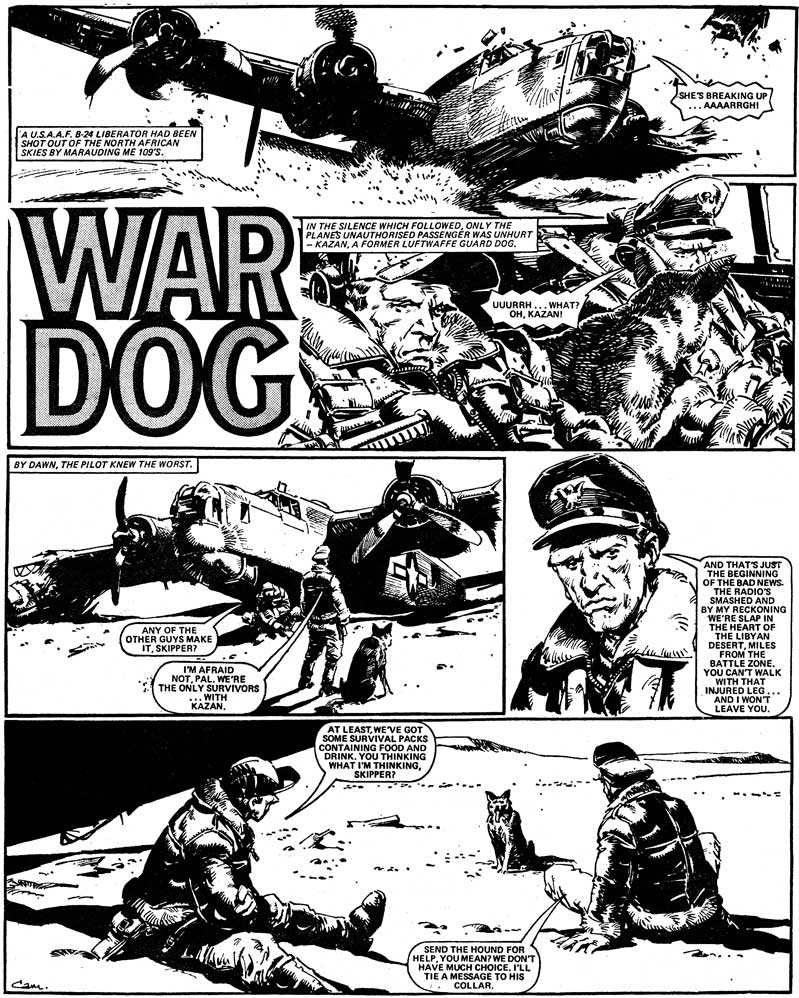 As with the first volume, Battle Classics, Volume 2 follows Fighting Mann with a shorter piece, War Dog, which ran for about four months. Again scripted by Hebden with art by first Mike Western (HMS Nightshade, Darkie’s Mob) followed by Cam Kennedy. As the title suggests, the series is about a dog, Kazan, a German shepherd trained as a Luftwaffe guard dog, who, through a series of unlikely events, winds up travelling from the Northern Russian Front, through the Murmansk convoy run to England, then to North Africa courtesy of an American bomber crew. There Kazan falls in with a group of Italian soldiers before finally being reunited with his original master, who has by this time been attached to the Afrika Korps. The strip is great fun, and Kazan makes for a nice device to take the reader on an accurate tour of the war in Europe before the invasion of Sicily. The dog’s story is told against a backdrop of a very real world at war, and Hebden and Kennedy get it right, from Russian partisans to English quarantine laws. 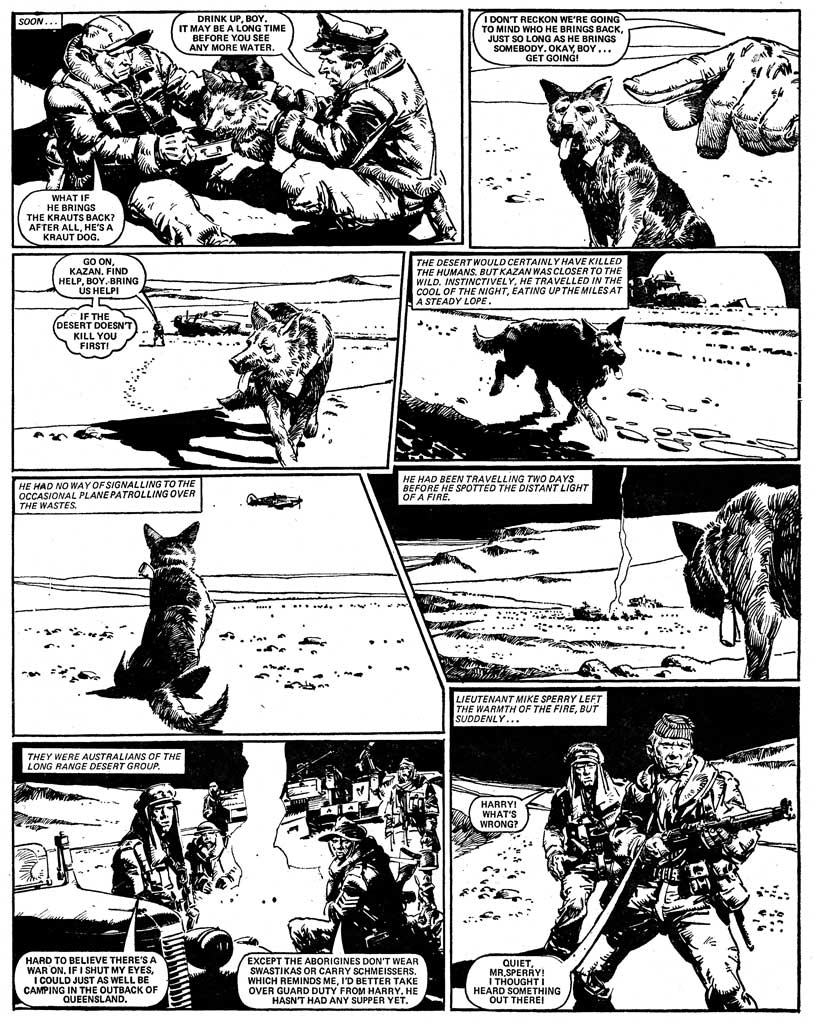 Beyond reprinting some incredible war comics, these books are also an act of preservation. Each volume is created from digital scans of the original issues, which are then cleaned up as much as possible. While this means original printing errors are reproduced along with occasional spots of time-worn degradation, it also serves to prevent the loss of the work itself. In a world where most American comics have been collected and preserved in various forms, it is something of a shock to realize that there is a large body of British comics that has not had the same treatment. Hopefully, the Battle Classics series, as well as Titan’s other Battle collections, will continue to sell well enough to allow them to continue the work of collecting and protecting these incredible comics.

Garth Ennis Presents: Battle Classics, Volume 2 is available now from comic dealers nationwide, or via Amazon and other online retailers. The book is a high-quality, library binding-style hardback, and retails for $39.99.