Titan Comic’s Johnny Red #4 was a highlight of February’s pull list, and continues to be the best war comic on the market, with Ennis (w), Burns (a), and Wordie (c) consistently performing at the highest level individually, and as a truly brilliant creative team.

Currently, Garth Ennis is scripting three different war comics for three different publishers (War Stories for Avatar Press, Johnny Red for Titan Comics, and Dreaming Eagles for Aftershock Comics). Yet the majority of his attention and talent seems to be pouring into Johnny Red, which continues to be a highlight of my monthly pull list. As I have noted before, the fact that Ennis has found a rare and perfect team of co-creators in Keith Burns (a) and Jason Wordie (c) is a major part of what makes this comic an outstanding piece of work, and the team continues to deliver with Johnny Red #4, “The Ghost Lands.” 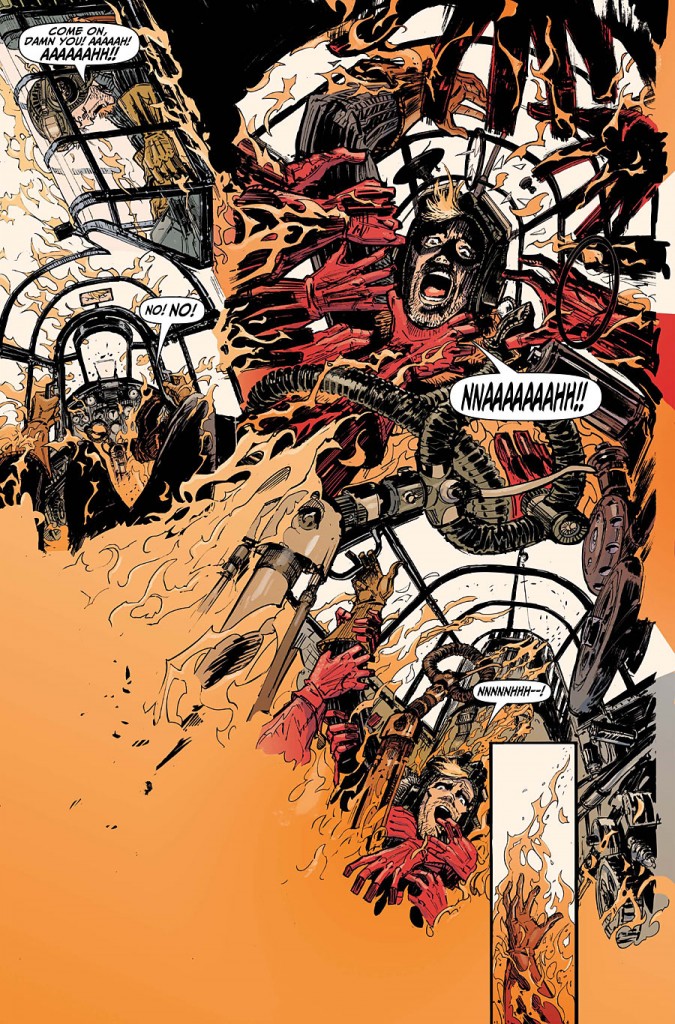 The issue opens with an incredible dream-sequence in which Johnny and his iconic Hawker Hurricane are falling out of the sky, consumed by flames, while Johnny is pulled from the cockpit by the burning hands of all of his friends and comrades who have died in the war, including the current members of Falcon Squadron, the sequence culminating with Johnny all alone standing atop a frozen river looking down at the faces of his dead through the ice. What really seals the deal, however, is the following page, where Johnny jumps awake, shouting denial of the dream, finding himself in his barracks bed. Captain Nina Petrova, his Night Witch lover, merely looks at him from where she is dressing across the room, and asks “Bad one?” It’s not a clingy, emotional “poor baby had a nightmare” question. Indeed, Petrova barely looks up from putting on her boots. Instead, it’s a simple soldier’s recognition: the war is horror and death – nightmare making.  Some are worse than others, but for these two, the dreams, and the psychological trauma they indicate, are simply a fact of life. It’s a brilliant sequence, exquisitely rendered, particularly in the transition from the orange-reds and blue-whites of the dream to the deep blacks and blue-greys of Johnny’s hut. These first six pages alone are worth the $3.99 cover price. 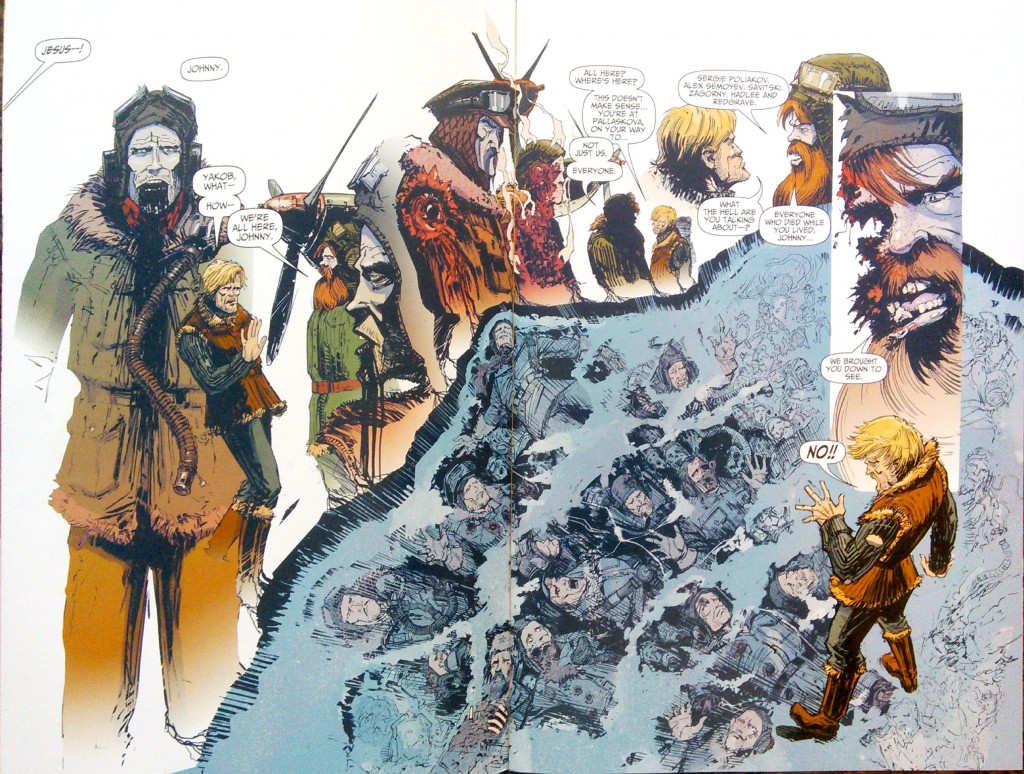 In terms of the larger plot of the series, Johnny, Petrova, and Rodimitz have discovered that the rest of Falcon Squadron have been sent on a secret mission deep behind German lines, and have determined to follow them, because something simply doesn’t smell right about the entire thing. In passing, Ennis delivers some of his trademark humor and narrative subversion, as the reader the ancient Rodimitz of 2015 reveals that the big mystery of why Johnny’s Hurricane was found in Germany is no mystery at all – it’s just the place where Johnny suffered his final crash landing, much later in the war, and has nothing at all to do with the tale Rodimitz is telling. Which begs the question of why the old man has decided that his visitors need to hear this story instead? The final pages of the issue introduce another familiar character familiar to readers of the original Battle Picture Weekly series, the Nazi fighter ace von Jurgen, setting up a potentially dicey aerial duel for issue 5.

I should also take a moment here to mention the back matter in this and every issue of Johnny Red to date, roughly four pages in every issue focusing on some historical details of the German-Soviet War. This time around the reader gets some background on German fighter aces on the Russian Front and some technical information on the pros and cons of various Russian aircraft during the war. Previous issues have provided data of the Night Witches, CAM ships, the historical use of Hawker Hurricane fighters on the Russian Front, and histories and interviews about the original Johnny Red comics. These extras are nicely done, and add some nice background to the main story, particularly as the Russian Front unfortunately remains relatively obscure to many Western, and particularly American, readers. This regular historical grounding is something Titan Books has excelled at in its hardcover reprints of Johnny Red, as well as other Battle favorites like Charley’s War and Darkie’s Mob. Hopefully, Titan will include the back matter from the floppies in the trade edition of Ennis’s Johnny Red, and perhaps even expand on it.

Titan Comic’s Johnny Red #4 was a highlight of February’s pull list, and continues to be the best war comic on the market, with Ennis (w), Burns (a), and Wordie (c) consistently performing at the highest level individually, and as a truly brilliant creative team.