2015 was a banner year for war comics, and marks a resurgence of the genre as a whole in the market. With 2016 just around the corner, it’s a good time to look back at some of the amazing collections and trades published this year, and to provide some ideas for all of those Amazon gift certificates that the holidays may have brought your way.

In the US, DC Comics ruled the war genre from 1959 – 1988, and 2015 saw the reprinting of some classic silver and bronze age comics from DC’s war line. Showcase Presents: The Unknown Soldier, Vol. 2 reprints the tales of the faceless Soldier from Star-Spangled War Stories 151 – 188 (1970 – 1975). As usual for the Showcase Presents collections, the comics are printed in black and white, and on cheap newsprint, making this volume one of the few trade collections that you might want to consider bagging before you put it on your shelf. Still, 548 pages of comics for a cover price of $16.99 is a pretty good deal. Featuring stories by Robert Kanigher, Joe Kubert, Bob Haney, Archie Goodwin, Frank Robbins, and David Michelinie; and art by Kubert, Irv Novick, Jack Sparling, and Gerry Talaoc this volume contains some of the biggest names in the genre. While the stories are constrained by the Comics Code, the Unknown Soldier nonetheless manages to tackle subjects like the Holocaust, racism in US forces, assassination, and the nastier side of covert operations. This really is a great collection of a great Bronze Age run, and deserves some prime shelf space. 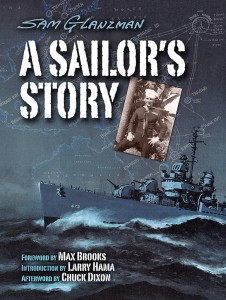 In the historical war comics department, 2015 saw some outstanding releases. Writer/artist Sam Glanzman’s A Sailor’s Story was collected and reprinted by Dover Publications. A type of graphic memoir of Glanzman’s own service aboard the USS Stevens (DD-479) during World War II, A Sailor’s Story is notable for its scarce battle scenes. Instead Glanzman tells the story of day-to-day life on a wartime “tin can,” with all of its boredom, endless scut-work, and sudden terror. It is also a very personal bildungsroman as the young Sam experiences the world from the unique perspective of a sailor during wartime. A Sailor’s Story is a powerful work of art and an important historical document, based largely on sketches and journals Glanzman kept (contrary to standing orders) during his service and gives a unique perspective on the conflict from a below-decks perspective. 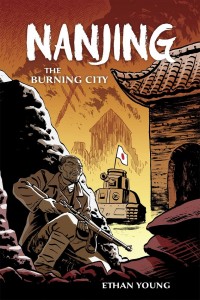 Unlike A Sailor’s Story Ethan Young’s Nanjing: The Burning City is full of the horrors of war. A fictionalized story of two Chinese soldiers trying to escape the city of Nanjing after the Japanese conquest of 13 December 1937, Nanjing details the events of the subsequent six weeks, known today as the Rape of Nanjing or the Massacre of Nanjing. Young’s powerful narrative, presented in black, white, and grey powerfully evokes the horror of those weeks, during which the occupying Japanese slaughtered as many as 300,000 civilians and prisoners of war, often in the most barbaric and brutal fashion. In addition, over 20,000 Chinese women were brutally raped, and often mutilated and killed, by Japanese soldiers. Young’s narrative is stark and powerful, and while he refuses to look away from the atrocities perpetrated upon the people of Nanjing, he also eschews overly graphic war porn in telling his story. Nanjing: The Burning City is an incredible addition to the canon of graphic histories, and one that haunts the reader well after the book has been closed. 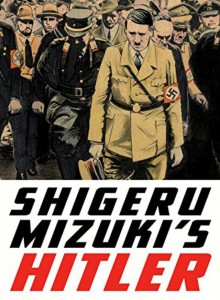 The great Shigeru Mizuki died this year, but not before completing the last volume of his monumental Showa: A History of Japan, and not before seeing his graphic biography Hitler translated into English. Using his famous style of photorealistic backgrounds and cartoonish characters, Mizuki traces Hitler’s life from his time as an art student in Vienna before World War I until his suicide in 1945. Though perhaps constrained by the graphic narrative format to being an overview, Mizuki’s Hitler nonetheless presents a compelling and revealing look at a man who for many represents the living embodiment of evil. With this book, Mizuki has cemented his place as Japan’s greatest graphic historian of the Second World War, and as the product of one of the world’s greatest comic creators at the height of his talents, Hitler is a must for any war comics collection. 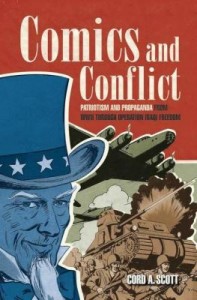 Comics in Conflict, art by various

2015 also saw war comics finally getting some of the critical study that they have long deserved. Cord Scott, a historian whose articles on war comics have set the standard for academic investigations into the genre, published his first monograph on the subject, Comics and Conflict: Patriotism and Propaganda from WWII to Operation Iraqi Freedom. Scott examines the origins and development of war comics from their origins as propaganda to more complex mirrors of social and cultural attitudes to war in general and specific conflicts as a whole. Further, Scott examines how war comics have addressed a variety of social and military issues over time, and provides and incredible bibliography that is sure to be an invaluable tool to anyone wishing to research the genre further.

Please note that the above is in no way intended to be an exhaustive list of war comics in 2015, but rather a small sample of some of the work being done in the genre over the past twelve months. There were more, many more, war genre comics and trades put out in 2015 that are well worth your time, and you’ll read about ‘em all – eventually – here at C’est la Guerre!