Chip Zdarsky does what he wants, and he does it with style. (And he’d probably hate that line, but it’s true!) The comic book writer and artist, whose work can be seen in Image’s Sex Criminals, Marvel’s Howard the Duck, Archie Comics’ Jughead, and several other series, is known for his razor-like wit, his irreverence, and the heart he Trojan Horse’s you with in the meantime. The way he approaches his craft is all his own and he always sticks the landing.

It should be no surprise, then, that when the creator wants to hold his own comic-con, he’ll do it the way he damn well pleases. For the second year, Mr. Zdarsky is holding his own convention, titled appropriately enough Zdarscon, somewhere in Toronto. I say “somewhere” because he won’t be revealing the location of this year’s Zdarscon until the morning of the event—so you better keep an eye on his Twitter page.

Mr. Zdarsky spoke with me recently about the event, how it’ll be different from the last Zdarscon, and how he’d never want to meet a Kegelface cosplayer.

FreakSugar: This is the third year you’ve held Zdarscon, right?

Chip Zdarsky: This will be the SECOND Zdarscon! The first was two years ago and I took a much-needed “skip year” to plan out the next phase. The first one was just me on a trolley with a bolted down chair, table, and comics rack, being pulled along by a friend in the hot sun as I signed books outside FanExpo in Toronto. This will be different.

FS: You promise on your flyer “a nice time.” What is it about Zdarscon that makes it such a special time?

CZ: There is a level of intimacy with Zdarscon that you just don’t get with the bigger shows. I will listen to the attendees, look them in the eye, all things that just don’t happen at a regular comic convention. The setting for this year’s Zdarscon will help facilitate those important connections. 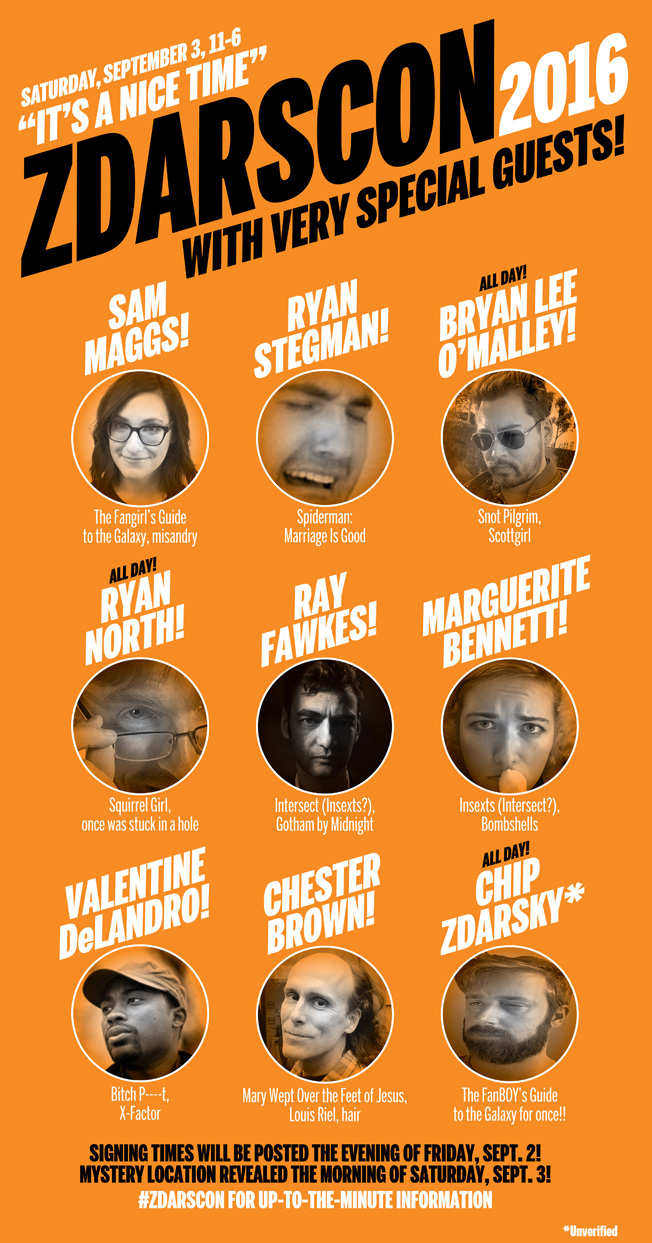 Look at this list of awesome! LOOK AT IT!

FS: How has Zdarscon changed since your first time holding the con?

The main issue with the first Zdarscon was the heatstroke I ended up having after being carted around in the hot sun for a day. I’ve learned a lot since then about basic protection from the sun, so that will definitely be a factor. Also, we have actual guests this year, like BRYAN LEE O’MALLEY and RYAN NORTH.

FS: I know you can’t reveal a whole lot about what attendees can expect at Zdarscon, but what can you tease?

FS: For folks who are wanting to attend Zdarscon, where can they get info to make the trek to see you?

CZ: The location has been secured but it’s a secret for now. If they follow #zdarscon or @zdarsky on Twitter I will reveal more details as the date gets closer, with the actual location being disclosed the morning of. All I can say for now is that it’s in downtown Toronto, very close to FanExpo, which apparently is happening the same weekend. I had no idea, this was a total coincidence again.

Zdarscon, held by comic creator Chip Zdarsky, will take place in downtown Toronto this Saturday, September 3rd… somewhere. For the exact location, be sure to check out Mr. Zdarsky’s Twitter page, @zdarsky, the morning of September 3rd. It’s sure to be a very nice time!

Also, while we don’t know all of the details surrounding Zdarscon, Mr. Zdarsky has revealed a few names of comic creator attendees who’ll be on-hand to greet eager fans: