One of the most well-known members of Marvel’s Inhuman cast of characters is the teleporting dog Lockjaw: sweet, loyal, and brave, he steals the show in whatever comic book panel he’s in. Really, who doesn’t love a puppy, and Lockjaw is one who is infinitely lovable. That’s why a miniseries focusing on the Inhuman king Black Bolt’s best friend seemed like a beautiful fit.

As if that’s not enough, writer Daniel Kibblesmith—who’s known for his wonderful comedic and poignant work on everything from The Late Show with Stephen Colbert to Quantum & Woody to Santa’s Husband—has taken the helm to guide Lockjaw’s adventure through several lesser-explored pockets on the Marvel Universe as he searches for his siblings. Joining Lockjaw on this romp is the sometimes-hero known as D-Man, who isn’t in the best of mental states and could stand for a distraction in the form of derring-do.

Mr. Kibblesmith spoke with me recently about the conceit of the Lockjaw miniseries, how D-Man plays a role in this tale, presenting gay representation in a real, organic way, and how the big finale will shoot for the moon.

Also be sure to check out our exclusive preview of pages from Lockjaw #4, with pencils by Carlos Villa, inks by Roberto Poggi, and colors by Chris O’Halloran! 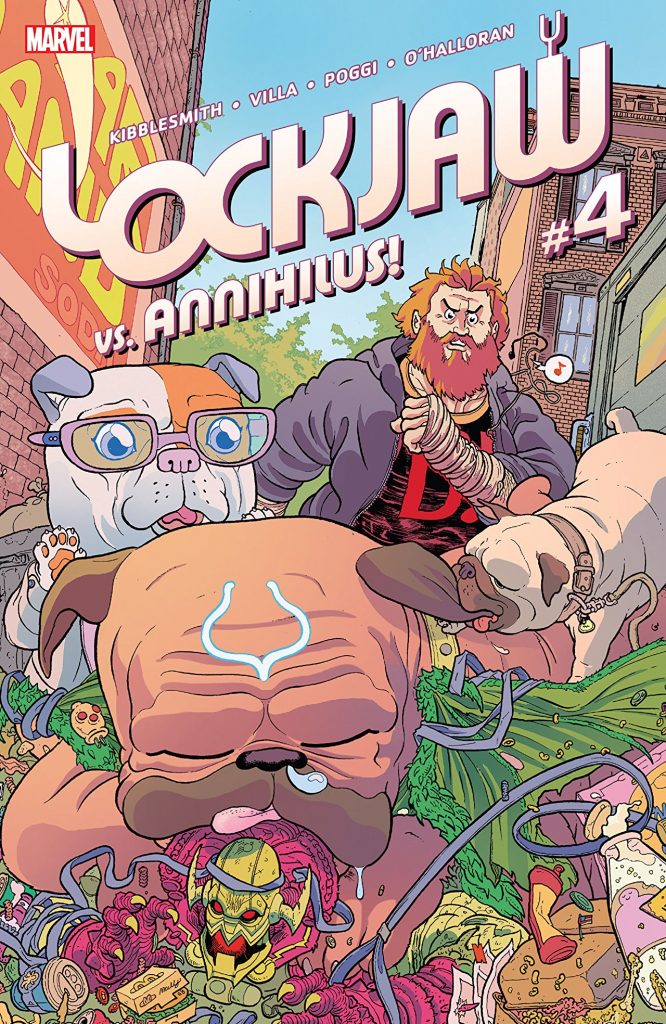 FreakSugar: How did you become involved in writing a Lockjaw miniseries? Was it something that you had been toying with doing or were you approached with the idea by Marvel?

Daniel Kibblesmith: Editor Wil Moss reached out to me and asked if I had any free time for a spur-of-the-moment project — which honestly, I don’t think I did, but here we are! He didn’t tell me which character he had in mind right away, but having grown up predominantly reading Marvel comics, I was down for just about anything. And indeed, it turned out to be a character from the “just about anything,” category. But I don’t want to sell it short, I was extremely excited, and I have the all-caps text messages to my wife to prove it.

FS: Where do we find Lockjaw in this miniseries? What’s pulled him away from the Inhumans for this adventure?

DK: Lockjaw is on a universe-spanning solo adventure to check on his long-lost siblings — I mean, dogs are born in litters right? And since Lockjaw is sort of a weird peripheral character, and a teleporter, we couldn’t resist doing a story about visiting Marvel’s hidden corners, with appearances from other peripheral places and characters you don’t get to see every day. 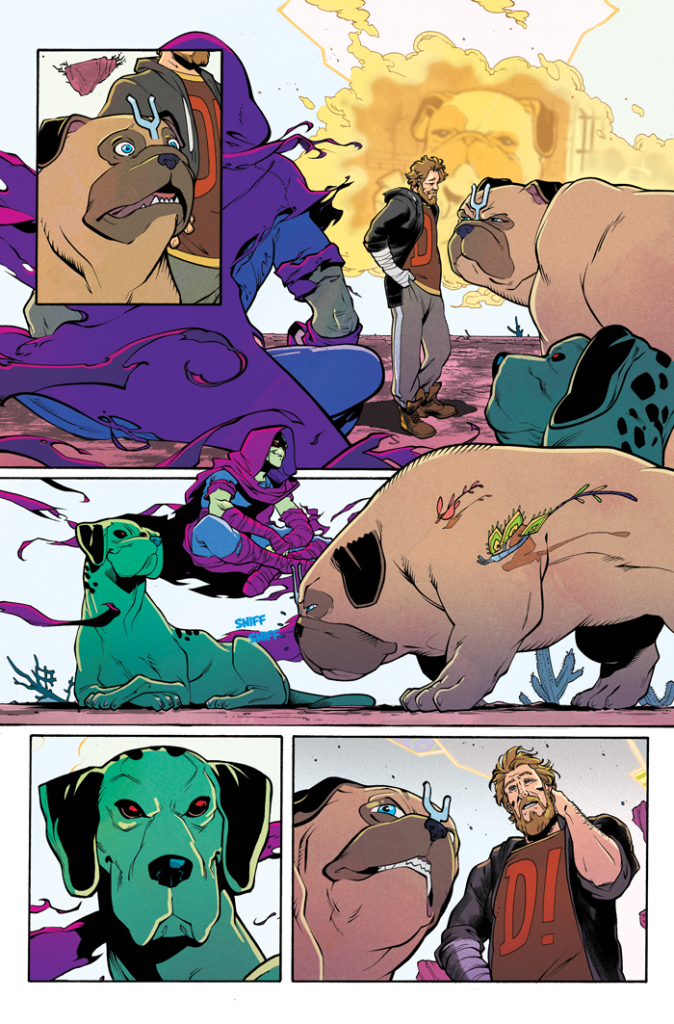 FS: In his dimension-hopping, Lockjaw pulled along Dennis Dunphy, the sometimes-hero known as D-Man. D-Man might seem like an odd choice, but, for me at least, you made me care about the character for the first time in a long time. Why did you decide to put the spotlight partly on him for this story?

DK: Since Lockjaw is a non-verbal protagonist, I knew he needed a companion, someone to be our point-of-view and watch the mystery unfold. And, no offense to D-Man, we needed someone who wouldn’t overshadow our star, and a character that would definitely be available for this story! So I thought about who in the Marvel Universe has had a lot of ups and downs, and could probably really use the companionship of a dog.

FS: Following up on that, as much as the comic might be called Lockjaw, D-Man is a true co-star of the book. You manage to pack a ton of character growth in just four issues. If Dennis survives the miniseries, is there more you’d like to explore with D-Man?

DK: I love D-Man. I think superhero comics have a not-great track record of dealing with mental illness, and I really wanted to honor his history of being a wounded person, but in a way that would be relatable to readers who have gone through their own actual bouts of real-life depression. So our D-Man doesn’t live in the sewer, but he has holed himself up in his apartment. Without giving away the ending, he’s not going to be 100% after this, because that’s not how real depression works, but getting whisked away by Lockjaw definitely forces him to start opening himself up to the world again. I hope we humanized him to a place where whatever his next adventure is, he won’t have to feel like a walking punchline. 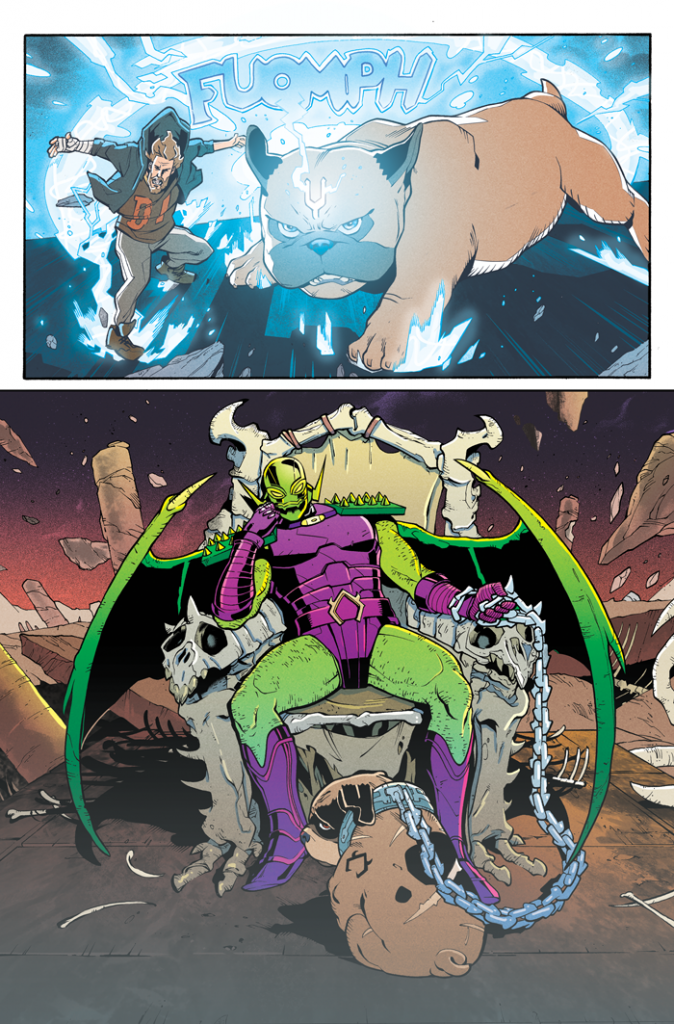 FS: In issue 3, you fold in everyone from Spider-Ham to Sleepwalker to the series’ Big Bad, Annihilus. It’s clear you have an appreciation of the wide and varied nature of Marvel’s history. Which character surprised you the most in how enjoyable she or he was to write?

DK: I think anyone who read Issue #2 can tell that I love writing Ka-Zar. He’s just a creature of pure confidence, the exact opposite of Dennis when they meet. I loved giving him lines where he acknowledged his flaws or limitations (“I can fight two wolves”) because he’s a guy with nothing to prove. He’s just realistic about his own survival, and the fact that he’s survived this long is proof enough that he’s exactly who he appears to be.

FS: Not a question, but a compliment: One thing I appreciated about how you wrote D-Man is that, like in your book Santa’s Husband, you mention he’s gay, but you present him as a well-rounded character. Being gay is a part of him, but not his only quality. That was just something I appreciated and thought you should be commended for it.

DK: Hey! Thank you. One of the most serendipitous things about this miniseries was that I had planned to reintroduce D-Man as gay, only to find out that he’d already come out in the Sam Wilson: Captain America comic. I think that writers were starting to pick up on the subtext that had been there since the beginning, and wanted to make it official in a dignified and modern way. I loved that Dennis came out without a lot of PR fanfare, and my only regret was breaking up his healthy relationship so I could cast him as a sad sack again. But that’s comics, man. 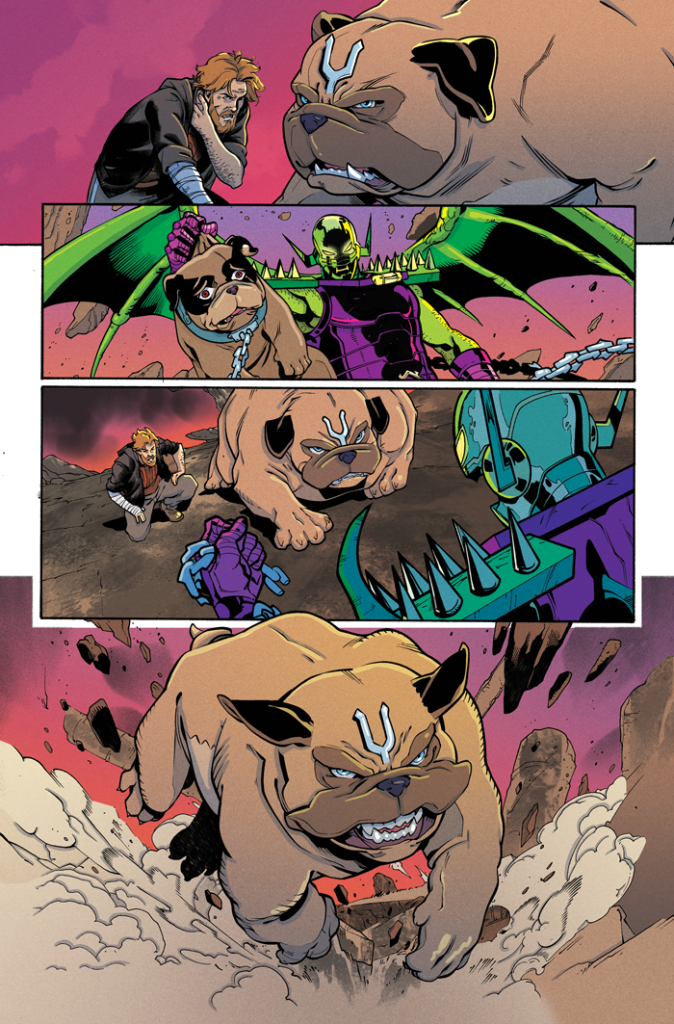 FS: Is there anything you can tease about the big finale?

DK: Lockjaw was my first Marvel comics project, and I wanted to write it like it might be my last, so expect to see a LOT of more of the Marvel Universe (and beyond?) packed into this final issue.

Lockjaw #4 goes on sale Wednesday, May 30th, from Marvel Comics.

D IS FOR DESPERATE! Lockjaw and his companion D-Man finally face their enemy: Annihilus, Lord of the Negative Zone! And he’s got one of Lockjaw’s siblings! Annihilus wants access to every dimension — no matter how many lives it costs. Don’t miss the conclusion to Lockjaw’s grand adventure, complete with mind-bending cameos — including the Avengers B.C.!