Welcome to the September edition of FreakSugar’s DIY Comics column! This month features Keith M. Dallas and his project, The Argonauts. Currently, Dallas and TJ Comics Editor-in-Chief Kevin Powers are attempting to crowd-source funding for a collection of the first six issues of The Argonauts on Kickstarter. I sat down with series writer and recent Harvey Award-Nominee, Keith M. Dallas to discuss The Argonauts and his experiences in the comic book industry as a creator.

FreakSugar: Where did your concept for Argonauts come from?  How does your concept stand out from other superhero team books?

Keith M. Dallas: The Argonauts started with my desire to take characters from different time periods and group them together as a team. I’ve been working on these characters for a long, long time. I mean, I recently found personal notes about these characters from the early 1990s! I decided an impending alien invasion of Earth would be the team’s raison d’etre…

FreakSugar: Sorry to interrupt. For our non-French speaking readers, “Raison d’etre” means “the most important reason for a person’s existence”. Please, Keith, continue…

Dallas: Okay, so a bunch of characters from across time fighting aliens. I know what you’re thinking and I agree: that’s really not that compelling a “hook” for a comic book series. It’s rather run-of-the-mill. So my dilemma was trying to figure out a way to turn The Argonauts into a more intriguing concept, and one day Egg Embry, the editor of a different creator-owned series of mine (Omega Chase) came up with the solution: Don’t let the heroes of the story understand each other. They’re all from different time periods and different locations. “How could they possibly understand each other?,” he asked me. He felt it would be dramatic cop out if I allowed the heroes to use some kind of Star Trek-like universal translator that would allow them to talk to each other. Egg’s suggestion hit me like a lightning bolt! That’s when I decided to make “miscommunication” the principal theme of the comic book.

So in a nutshell, The Argonauts is an action-packed adventure that incorporates the super-hero, science-fiction and sword-and-sorcery genres but most importantly, it’s a fantastic “Tower of Babel” parable. The aliens are coming to enslave humanity, and Earth’s only hope lies in the efforts of eight heroes, but since these eight heroes can’t understand each other (and don’t want to understand each other), what chance does Earth really have?

FreakSugar: You have a pretty decent sized cast in this book. Of all the Argonauts, who is your favorite to write? Why?

Dallas: You’re making me choose a favorite child?! How mean!

Alright, let’s see, one of the characters from the far future, Pol, is a fun character to write because he’s the ultimate comedic “straight man.” He’s an emotionless, walking tri-corder, making observations and deductions. He doesn’t ask questions. He doesn’t make judgments. He’s built like a brick shit-house but he doesn’t actually engage in combat. He’s just there to say things like, “The sun will set in 16.5 minutes.” As a result, he’s a constant source of frustration for the other characters (the ones who understand him, that is).

As fun as he is to write, though, I get a bigger kick out of writing Jennifer Finn, the wife of the story’s costumed crime fighter, Dart. She’s very intelligent. She’s a weapons inventor and she’s also a spitfire. She cares about her husband very much, but she also berates him whenever she thinks he’s taking unnecessary risks. She’s hot tempered and doesn’t take “guff” from anybody. One of my favorite scenes in the series is when she’s cursing out some Argon City police officers and throwing rocks at them because they refuse to give medical aid to her husband. (Dart and the police department have a “history” which will be revealed in later issues.) 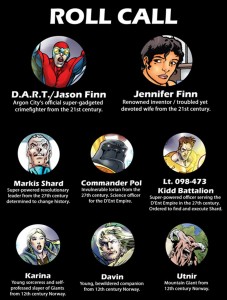 A Handy Cast Sheet for The Argonauts

FreakSugar: With a ensemble concept like the Argonauts, what was your biggest challenge when you were scripting your story?

Dallas: Ironing out the characters’ “voices”–their speech patterns and vocabulary. To emphasize, again, the “Tower of Babel” theme, I began playing with the syntax of language. For instance, Shard, the freedom fighter from the far future, doesn’t say, “Listen to me.” He says, “To me listen you.” Similarly, Davin, one of the characters from 12th century Norway, won’t say, “I don’t understand.” He’ll say, “I understand not.” Keeping track of each character’s syntax has been a challenge, but I think (and hope) I’ve been consistent.

FreakSugar: I’m sure that can prove to be daunting with certain foreign languages that employ different clause structures…

Dallas: At one point, I had the notion of using Norwegian syntax for the Norwegian characters’ dialogue, but I quickly learned that inserting English words into Norwegian syntax just turns every sentence into gibberish. (Anyone who has used Google Translate on a foreign language article can understand what I mean.) So I abandoned that idea pretty quickly.

FreakSugar: What are some of the unique challenges of independently publishing and crowd-sourcing a project?

Dallas: I would say the two principal challenges of independent publishing are budget and visibility. The independent creators are constantly striving to get readers to notice them. The spotlights shine brightly on the big publishers (e.g. Marvel, DC, Image, IDW, Dark Horse, etc.), leaving little space on the stage for small press. That’s just the way it is, and there’s no point in complaining about it. Because of this situation (and the rising cost of paper), you accept the fact that with every issue you publish, you’re losing money. That’s unavoidable. The question is always how much money are you willing to lose. You don’t want to sacrifice the quality of the material you’re publishing, but you can’t afford to pay the same page rates that the bigger publishers do. So you often spend a lot of time searching for talented artists, colorists and letterers who will accept the meager amount of money you’re willing to pay them. Those are the major challenges that I’ve confronted as an independent creator.

FreakSugar: You’ve already established yourself in the comic book industry and a project of you edited, American Comic Book Chronicles: The 1950’s, was nominated for a Harvey this year. How did you get into the industry originally? How does it feel to get industry recognition with an award nomination?

Dallas: The Harvey Award nomination for American Comic Book Chronicles was as gratifying as you can imagine. I feel it recognizes and validates the hard, meticulous work that has been put into the entire series of volumes, not just by me but by people like John Wells and Jason Sacks and of course, Bill Schelly who wrote the 1950s volume.

As far as how I established myself, I would have to say it started when I began contributing to ComicsBulletin.com in 2004. Before long, the publisher promoted me to editor-in-chief. In that role, I began making a lot of contacts in the industry which then led to opportunities to produce work like The Flash Companion for TwoMorrows Publishing and the aforementioned Omega Chase for Th3rd World Studios. One of IDW’s editors loved Omega Chase so much that he encouraged me to submit some Ghostbusters story pitches, and that’s how I got to write the Ghostbusters: Con-Volution one-shot in 2010. On the other hand, based on the success of The Flash Companion, the TwoMorrows publisher asked me to pitch him some other book ideas, and that’s how American Comic Book Chronicles came to be. I’ve done work for some other publishers as well, but my real answer to your question is that I developed contacts within the industry and found job opportunities based on those contacts. It’s always about “who you know,” kids!

FreakSugar: Who are some of your influences as a creator?

Dallas: I don’t know if I “model” my writing style on someone else or if I read the work of another writer and say, “That’s how I need to write!” At least I don’t consciously do so. Maybe some of my readers can pinpoint an influence or similarity, but I think it’s important for every writer to develop his/her own style.

As far as comic book writers I admire, I’ll start with Paul Levitz, whose Legion of Super-Heroes stories I will always cherish. Mark Waid is one of the most versatile writers in the history of the medium, and Greg Rucka is brilliant. As great as Rucka’s comic book work is (and it’s great), his prose novels are even better. If you’ve never read a Greg Rucka novel, make it the next thing you read. You won’t be disappointed. The comic book that made the biggest impact on me was Watchmen. Absolutely blew my mind the first time I read Watchmen.

FreakSugar: What can you tell us about some of the cool incentives that come with pledging to your Kickstarter for The Argonauts?

Dallas: One of the most popular rewards attached to the Argonauts kickstarter campaign has been the “American Comic Book Chronicles” one where you obtain both a copy of the Argonauts TPB and one volume of American Comic Book Chronicles (whatever volume you want). We also have rewards that allow you to get the book and a great one character sketch by the Argonauts artist/co-creator Robert Saunders. And we just added a reward level where you can obtain a page of original art from one of the first three issues (your choice of page) for an affordable price. Live on Long Island? We’re going to have a celebratory launch party at Dave&Busters! I pay for your lunch and you get a copy of the book!

FreakSugar: What advice do you have for future creators who may have trepidation about attempting to Kickstart their own projects?

Dallas: Don’t be afraid to fail. The absolute worst thing that can happen is that you launch a kickstarter campaign and it fails to reach its goal. Disappointing, but not exactly the end of the world.

Most of all, you need to understand that it’s called a Kickstarter CAMPAIGN for a reason. You can’t launch a Kickstarter, walk away from it and hope in 30 days your goal has been reached. It won’t be. Instead, you need to act like a politician who’s running for office: you need to do something every day in order to get the campaign closer to its goal. You need to contact every appropriate friend, fan, and family member and ask for their support. If they claim to not have any money, ask them to at least share the link to your Kickstarter campaign as much as they can. You need their help to spread the word around. Call in favors. Beg and plead with people to help you. This is your dream, right? Wouldn’t a true friend help you achieve your dream of publishing your own comic book project?

(Interested in helping out Keith M. Dallas with his project? Be sure to swing by The Argonauts Kickstarter page. They only have eight days left.)