Marvel’s X-Men is one of the most beloved franchises in comic books history, with roots stretching back to the early 1960s. One reason to account for the popularity of Cyclops, Jean Grey, Wolverine, Storm, and the rest of the Children of the Atom over the decades is tied in large part to that long-lived history. There’s a certain attraction to a property that has created such a vast universe with a sense of and respect for the past. Like digging into such fandoms as Star Trek and Harry Potter, there’s a comfort in knowing that there’s a great volume of continuity to explore.

However, that very continuity can also be a hindrance to folks who wish to dive into the X-Men universe. For instance, needing a foreknowledge who has dated whom in which timeline with which version of a character (looking at you, Scott Summers and Jean Grey) could be a daunting endeavor to a novice fan looking to dip their toes into the X-waters, no matter how interested they are in Wolverine/Sabretooth fisticuffs.

To that end, this winter, artist and writer Ed Piskor, creator of the award-winning Hip Hop Family Tree, is taking his love for the X-Men and tackling the vast continuity of the first 30-years of their adventures to create a definitive distillation and remix in the form of X-Men: Grand Design.

Sorting and pouring over more than 8,000 pages of X-Men titles through the series’ first 280 issues, Piskor is examining those beloved comics to create a seamless, singular tapestry that tells one whole story, beginning to end. And listening to Piskor, you can tell this is a labor of love. 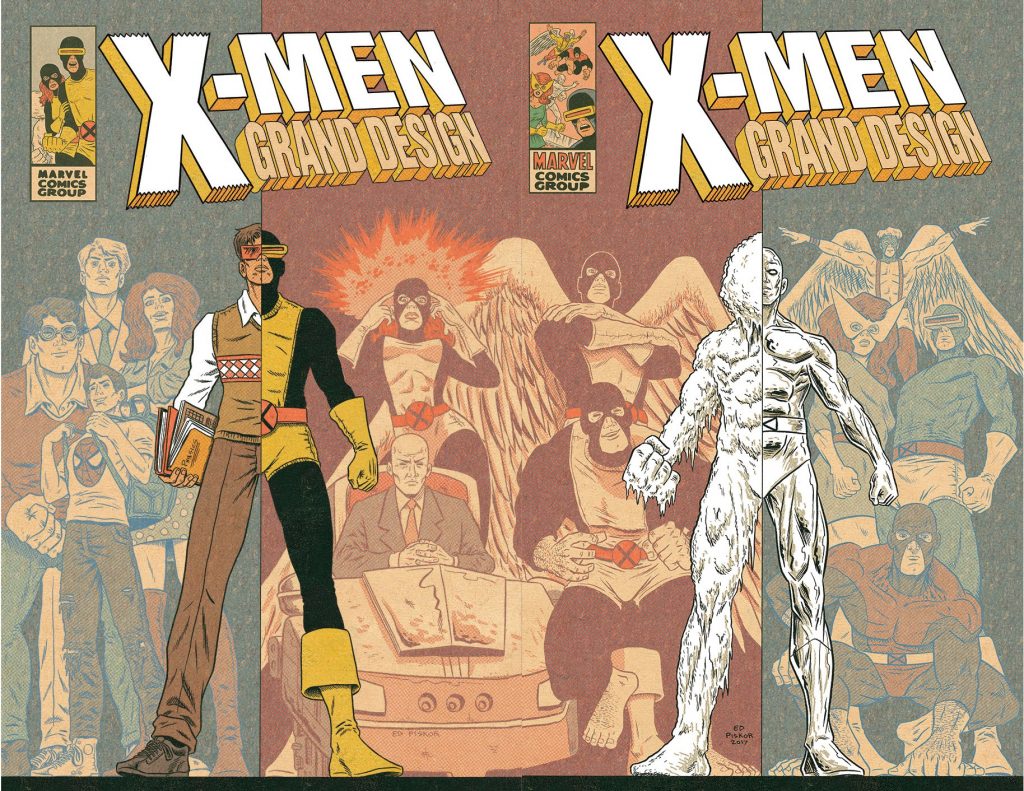 “X-Men: Grand Design is a tribute to everything comic book fans love about the X-Men from Stan Lee and Jack Kirby’s original run and Chris Claremont’s, epic 16-year stint as the series’ writer,” said Piskor, noting that everything from the Reavers to the Danger Room to the Mutant Massacre will play a role in his opus.

As you can see for the header and the covers above, Piskor has an eye for the characters in each of their iterations throughout the years. As writer, artist, colorist, and letterer for the project, there’s a sense of a singular vision we’ll bear witness to from beginning to end. X-Men: Grand Design will span six issues, each running 40 pages, over three years, divided into three separate yet interconnected miniseries: X-Men: Grand Design, X-Men: Grand Design–Second Genesis, and X-Men: Grand Design–X-tinction. The titles indicate that the first miniseries will focus on the early years of the X-Men, the second on the coming of characters such as Wolverine and Colossus to the X-ranks, and the third on latter-day storylines such as the “X-tinction Agenda.”

When a creator has as much passion for a project as Piskor obviously does–check out his social media feeds and try not to smile at his overflowing excitement for Grand Design–it will reflect on every page. If the early look at the books is any measure, we’re in for a treat.

“Ed Piskor is one of the most exciting cartoonists working today and seeing the iconic X-men filtered through his singular vision is the sort of comic book project that you can usually only dream about. But this dream is real, and it is a thing to behold!” — Jeff Lemire (DESCENDER, MOON KNIGHT)

“X-MEN: GRAND DESIGN is a tribute to everything comic book fans love about the X-Men from Stan Lee and Jack Kirby’s original run and Chris Claremont’s, epic 16-year stint as the series’ writer,” said Piskor. “It’s a compelling and complete story with a beginning, middle and an end, featuring everything from Xavier’s School for Gifted Youngsters, Cerebro and the Danger Room to the Mutant Massacre, the Reavers, Gambit, and Genosha.”

“Ed Piskor is a singular talent,” said Marvel Editor-In-Chief Axel Alonso.  “And he is unleashing the same passion, craft and attention to detail that fuels his award-winning HIP-HOP FAMILY TREE on a five decades worth of X-Men stories.”

What people are saying about X-MEN: GRAND DESIGN:

“X-MEN: GRAND DESIGN is genius – an epic love letter to my favorite childhood comic. It’s pop culture journalism and comics history filtered through the imagination of a master storyteller. It’s a unique interpretation of the Marvel Universe and a pleasure to read. Every page is a thrill.”—Jim Rugg (STREET ANGEL)

“Seeing a creator achieve a lifelong dream by pouring his heart and soul into a project is both rewarding and encouraging…. Ed’s retro artistic style and his love of the classic X-Men is going to propel GRAND DESIGN to the top of the selling chart and become a classic itself.”—MOVIEPILOT

“Piskor’s art is at the height of its powers in these pages. New readers and old guard comic book fans will appreciate GRAND DESIGN’s streamlining and distillation of the X-MEN’s epic, but convoluted saga. We will discover Piskor invented a new approach to present legendary past stories. Instead of starting a news series at issue #1 we’re better off in the retelling and refining of wonderfully raw past material we adore. It worked for Homer why not comics.”—Benjamin Marra, (NIGHT BUSINESS, TERROR ASSAULTER: O.M.W.O.T.)

“Ed is crazy enough to take thousands of X-Men pages and filter them through his own vision. He’s passionate enough to pull it off, too, as this isn’t simply an archival exercise. By tying all those pages together, Ed skillfully equips the material with a logic that was absent before, thus meeting our obsessive culture’s modern expectations. It’s a blast, this comic.”—Michael Fiffe (COPRA, ZEGAS)