“Every bizarre character, every outrageous action can be traced back to something as simple and basic as love, anger, or hope. It’s fun as hell to read.” 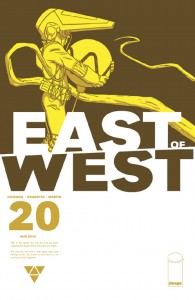 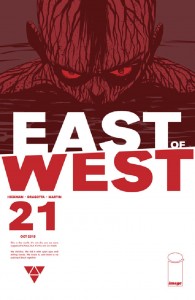 East of West, written by Jonathan Hickman and drawn by Nick Dragotta, is, in short, a story about the end of the world. More accurately, it is a jaw-clenching Science Fiction Western about war, death, love, politics and faith. It occupies an alternate timeline of history, one in which America is occupied by several distinct territories and the Civil War never ended. Conflict persists for nearly 50 years, until a comet strike signals the end of hostilities, the remarking of territory and the formation of the Seven Nations of America.

“The Accords were signed at Armistice – the epicenter of the event – on November 9, 1908. It was significant, historic, and the third most important thing to happen that day.

As in Atlanta, the Prophet Longstreet penned the Second Book of Revelation. And in Cheowee, Red Cloud shared a waking vision with his council of elders.

Then upon completion, and by all accounts at exactly the same time, both men collapsed and died.

The words spoken and the words written down – interlocking apocrypha, collectively called by believers The Message – remained an incomplete, unsolvable mystery for half a century.

Until the day it was completed.”

When an exiled Mao Zedong pens an addendum to his Little Red Book on his deathbed, The Message is complete. It tells the story of the end of the world. Apocalypse story, simple enough right? Enter the Four Horsemen. Death, War, Famine and Conquest are a jolly team of anthropomorphs, ushering in the end of all things with the aid of The Message and the loyal adherents to its cryptic promises of providence. The Horsemen elect a group of Chosen, each a prominent member of one of the Seven Nations capable of quietly steering their respective territories toward the predicted apocalypse. Everything is peachy and the end of days is right on schedule until Death falls in love with a woman and abandons the horsemen to father a child. In revenge, they kill his wife, steal his infant son, and sentence him to death, himself (hah, hah). Still with me? Hang in there folks. After killing Death, the other three horsemen also perished, expecting to all be reborn 10 years later, as part of an as yet unexplained plan. But when War, Famine and Conquest crawl from their graves Death is not with them…because he did not die. While Death rampages across America with two witches of the Endless Nation, the remaining horsemen set out to find him and kill him, for real this time. Meanwhile, Death’s son is being bred into the Beast of the Apocalypse by The Chosen, and his wife (surprise, she didn’t die either) gains leadership of the People’s Republic of America through regicide, waging war on The Chosen and on the other six nations. 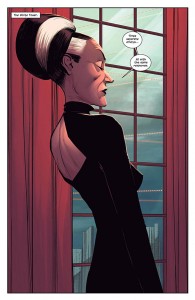 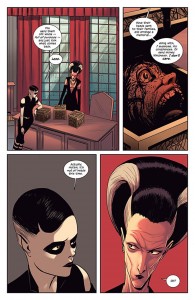 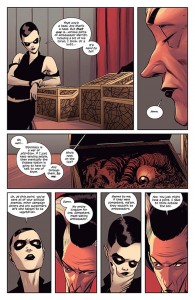 Apocalypse story, yes. Simple, no. The sheer magnitude of the plot is daunting, which I’m sure is frustrating to any poor souls trying to follow this review, but proves to be incredibly efficacious for the story. There’s just a wee bit more exposition needed before we can evaluate the current issues: The Seven Nations of America. Each exemplifies a specific cultural identity and each has a distinct goal in the war. The Union is token America; what one would consider The North in the Civil War. The Confederacy; the South. The Republic is the nation that became of Texas. The Nation of the American Endless; the Machine State created by the indigenous peoples of America after they rejected their mythic ideology of the past. The Kingdom of New Orleans; a self-explanatory monarchy. Armistice; the temple of The Message, occupied only by The Prophet Ezra Orion. The People’s Republic of America; territory in the American Southwest and Northwest annexed by banished Chinese Maoists.

Do not be intimidated by the premise. East of West is four trades deep, which seems like a formidable stack of comics until you crack open the first one and realize that within a couple hours you will be caught-up with the series and frantically Googling when the next issue drops while you tremor and cold-sweat like a back-alley addict. This project is nothing if not entertaining. The most recent issues, 20 and 21, center around The Union, The Endless Nation and The PRA. The president of The Union has received the severed head of every ambassador she has sent to the Endless Nation. In an effort to open a dialogue she sends her second in command, Doma Lux, and thusly we get our first glimpse inside the Machine City. When Doma arrives, the Great Chief is meeting with two Widowmakers, Warriors from the PRA, discussing the new alliance of their nations. When Doma is greeted in the same fashion as the previous ambassadors, a Widowmaker intervenes. Doma is taken to New Shanghai where she is trained as a Widowmaker herself, with instructions to return to her nation as a secret servant to the PRA. Her previous actions gain importance in light of this development, and leads the Endless Nation to suspect that The PRA is colluding with the Union. Narsimha, the Chief of Chiefs, departs for the dead lands, seeking what clarity he can gain from the spirits there. Doma leaves the Machine City to return to the Union and await her new master’s call.

Though admittedly a little less thrilling than previous issues, this bit of exposition was important. Without an appearance from any of the horsemen or any further developments with the Beast in training, the most recent issues come off as somewhat dull. Or perhaps this reviewer is just a brat who misses her favorite characters. This is a distinct possibility. Regardless, the trip to the Machine City is visually stunning, and the knowledge of Doma’s true allegiance has enormous impact on the story thus far, as well as that yet to come. It seems that every new issue of East of West introduces another intricacy of the already expansive universe. The pacing is excellent. Just as you are about to reach a point of irritation with something being unexplained, the answers are laid out before. This, of course, creates further questions. It is becoming quite a delightful little monster.

Hickman has managed to take an apocalypse story – something tired, something trite, something we have heard a thousand times before – and turn into something the likes of which we have never seen. East of West is epic, and I do not use that word lightly. This is due in no small part to the extraordinary writing. I mean the characterization is obscenely spot-on. When the horsemen speak of humanity their words drip disdain, Archibald Chamberlain explains his approach to politics with a haughtiness only achievable by the most pompous of Southern gentlemen, and the Indians of the Endless Nation spill their predictions of the future with the reverence and cold calculations of living computers that have somehow achieved spirituality. Innocuous statements made in regard to specific details of the comic world contain unmistakable gravity. An Endless Nation Chief observing that their relationship with machines has blinded his people to the world around them. An abused wife and mother desiring not revenge, but punishment for the evil doers that wronged her. A child learning that every minute decision he makes now has enormous impact what he will become. Though suspended in a thick viscous of fantasy these are instances that take root in us and clench us tightly. Only the most brilliant fiction can achieve a story so fanciful and so grounded in reality. Jonathan Hickman has crafted something altogether unfathomable. 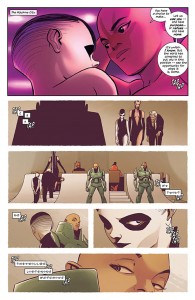 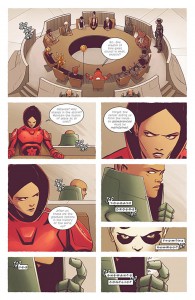 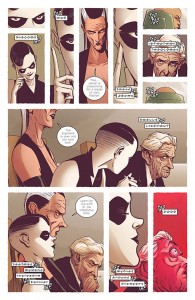 As moving as the writing is, the wild ride that is East of West would not be possible without the absolutely cinematic artwork. Bright and pristine, each panel contains immense drama. The varied perspective and panel layout build on the theatrical feel to make reading the comic genuinely seem like watching a movie – but more than that. It does not seem like watching a story, but more like experiencing the story. Depictions of violence, especially, are not so much graphic as they are emotive. The readers perspective is not that of the omniscient observer, idly watching the actions of the characters in a room. It is the perspective of those characters themselves. We see the attacker’s point of view, and then the victim’s. We do not see a boy’s face splattered with blood, but we squint from behind the boy’s eyes as his vision blurs red. Rather than viewing the experiences of the character, we get the experiences. Again, this comic does what films and other mediums hope to do. It moves us. 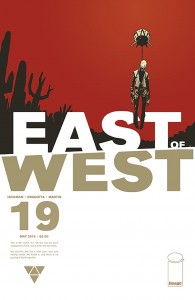 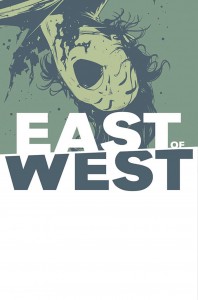 It is easy to praise East of West merely for its sheer entertainment value. It achieves a level of cognizance that only comic books are capable of, snatching you out of your world and throwing you into a vivid, pulsing fantasy. But that is to ignore the root of how this story can grip us so thoroughly, the raw base of that which drives the story, and drives us also. It’s pure emotion. Every bizarre character, every outrageous action can be traced back to something as simple and basic as love, anger, or hope. It’s fun as hell to read. It’s thrilling, it’s mysterious and its savage. It’s a wild, fast-paced Sci-Fi Western, damnit. But for all of that, the reason you won’t be able to set this book down, is because it’s loudly and painfully real.

1-2 Punch: East of West
Syd Williamson scores East of West 9.5 out of 10: "Every bizarre character, every outrageous action can be traced back to something as simple and basic as love, anger, or hope. It's fun as hell to read."
9.5Overall Score
Reader Rating: (1 Vote)
9.8