To be a fly on the wall of this comic series pitch to BlackBox Comics for writer Eric Palicki, artist Lucas Meyer, colorist Michael Bartolo, letterer Dezi Sienty‘s Ninja Kaidan, because it is phenomenal:

Yuki Snow, a man trained in both military and martial arts combat, inherits his estranged father’s company after his death. That inheritance includes the Kaidan armor, which allows Yuki to interact with ghosts and naturally draws the attention of nefarious forces from the lands of the living and the dead. Yuki has to stave off his foes and conquer his mixed feelings and history with his deceased father.

As much as it’s exciting to conceive of the concept of ninjas and ghosts duking it out, however, the comic needs depth behind it to make readers care about the rock’em sock’em. Fortunately, Mr. Palicki has shown time and again his skill in bringing robust characters with heft and dimension, as seen in past projects such the wonderful Black’s Myth for AHOY Comics.

Mr. Palicki was kind enough to speak with us recently about the conceit of Ninja Kaidan, how 1980s and 1990s action cinema has influenced the book, working with the creative team, and, of course, the perfect marriage of bringing ghosts and ninjas to one tail-kickin’ tale. 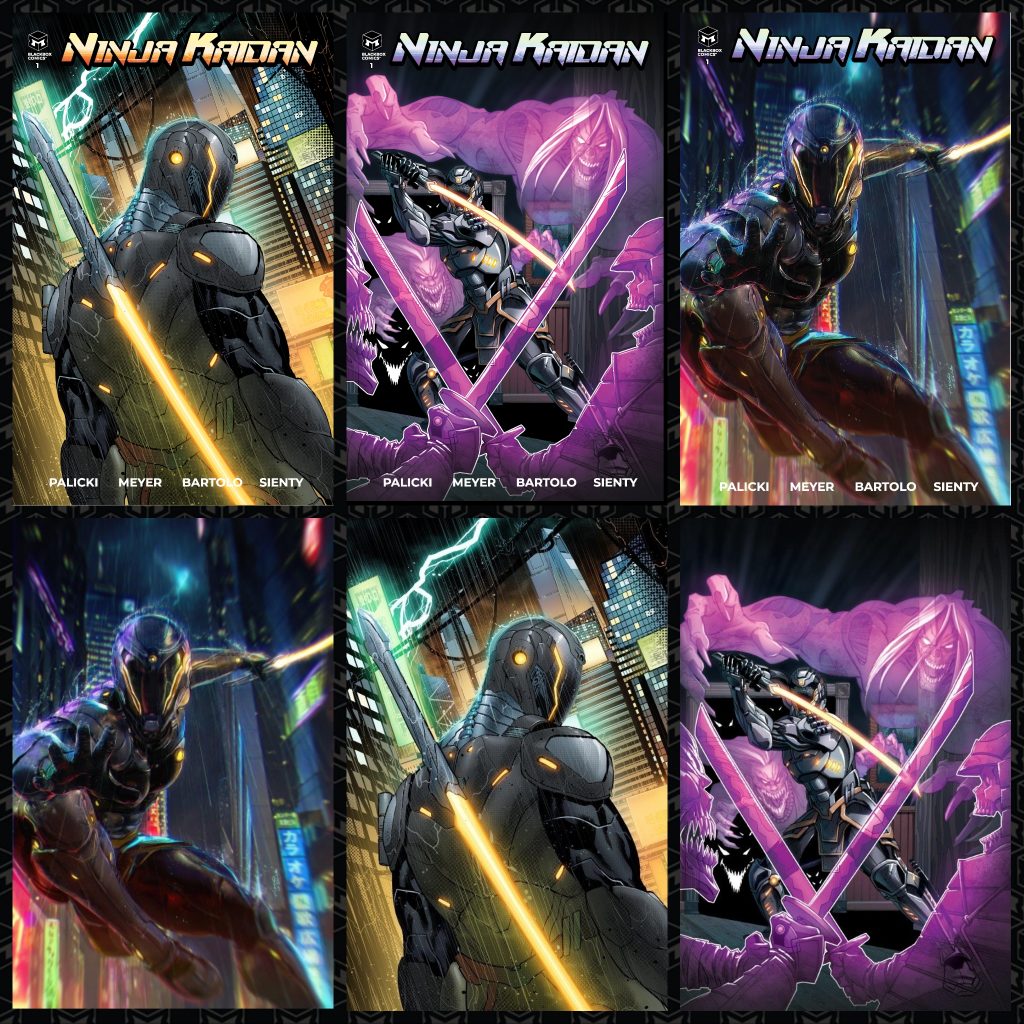 All Covers for NINJA KAIDAN #1

FreakSugar: For folks who are considering picking up the book, what is the conceit of Ninja Kaidan?

Eric Palicki: Ninja Kaidan is the story of Yuki Snow, who’s just inherited his father’s company — Yokai Consolidated — along with Dad’s pet project: the Kaidan armor, which allows its wearer to see and touch ghosts. Yuki finds himself suddenly at the center of a mystery: why did his father build this suit, and who, living or dead, is coming to take it?

FS: What can you tell us about the characters and the world of the series?

EP: Yuki Snow was born in Japan and trained in martial arts before his parents divorced and he moved to the US with his American mother. Yuki grew up and joined the army where he excelled in the Special Forces. In short, he’s a bit of a polymath when it comes to “ways to kill people.” Of course, finding himself suddenly out of the military and the CEO of his father’s company, Yuki will have to learn an entirely new set of skills, even before the army of ghosts shows up!

Marybeth Sands is Yokai’s chief engineer and the architect of the Kaidan project. As Yuki begins to unravel the conspiracy surrounding the armor’s existence, and navigates a world he suddenly knows to be full of ghosts, Marybeth becomes Yuki’s sole confidante.

There are a host of other characters, but it’s too soon to reveal too much about our villains. And Yuki’s father, of course, looms large over the story. He may be dead, but this IS a book full of ghosts. 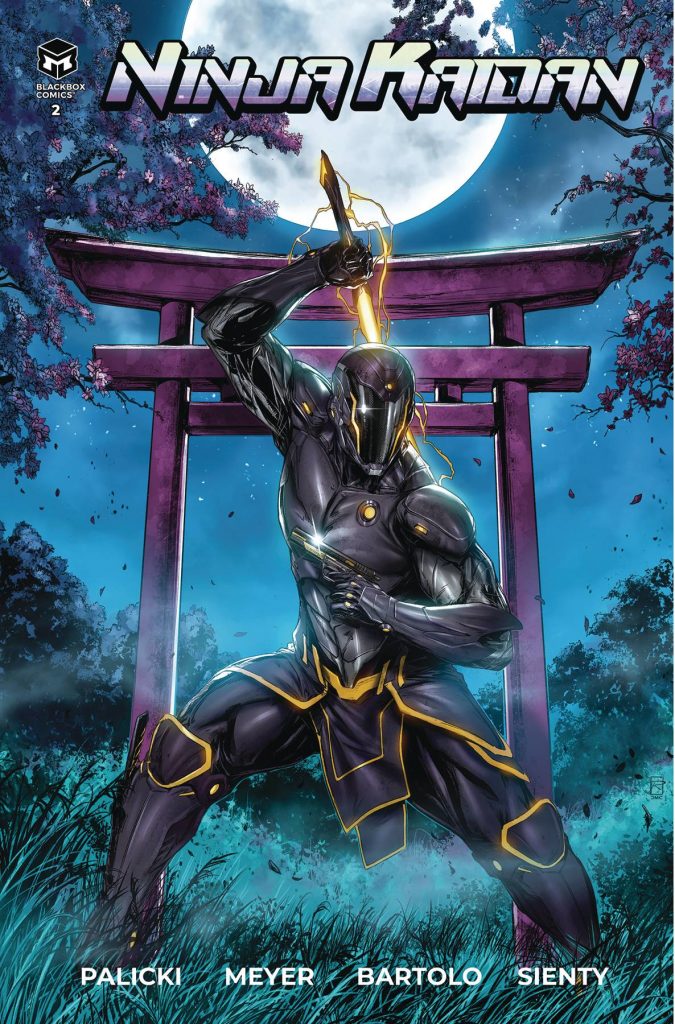 FS: I love the blurb of “NINJAS VS. GHOSTS”! Perfect! Do you have any particular influences for the book?

EP: Ninja Kaidan is a love letter to the action movies I grew up on in the 80s and 90s, the sort of movies I’d gravitate toward in the video store: early John Woo, Steven Seagal, JCVD [Jean-Claude Van Damme], the American Ninja movies, etc. More recently, I think The Expendables and Ninja Assassin capture that same aesthetic, and there’s hints of it in the DNA of the Fast and Furious movies.

I wanted the book to be an over-the-top action spectacle, and I think Lucas and I have succeeded.

FS: What is the collaboration process like with artist Lucas Meyer?

EP: Lucas has been a dream to work with. He asked a lot of questions, which is something I look for in a collaborator. It’s exciting when artist input improves the direction of a book, which is what happened here. I can sometimes have blinders on when I write, and it’s great when an artist suggests we zig instead of zagging to snap me out of my writing fugue and make the story better. I’m also delighted to hear Lucas is now doing some work with DC. I knew it was only a matter of time before he found his way to the Big Two.

FS: Following up on that, what is your writing process? Is there a specific way that you approach each script?

EP: I tend to do a lot of thinking followed by writing in sprints. The Ninja Kaidan scripts were intentionally written with a maximum of 4-5 panels in mind, in order to capture the frenetic pace of an action movie, and I wrote them at a similar speed, generally in a day or two per script.

I don’t usually write outlines, but I do outline. I just sort of keep them all in my head and let them spill out onto the page, giving the illusion there’s no outline or plot I’m working from. It’s probably not the most efficient method, but it’s worked for me so far.

FS: Are there any characters you’re sure readers will latch onto or is that like choosing you favorite child?

I hope everyone loves Yuki. This is his book, and his father has left him with an incredible burden. I hope readers root for Yuki. 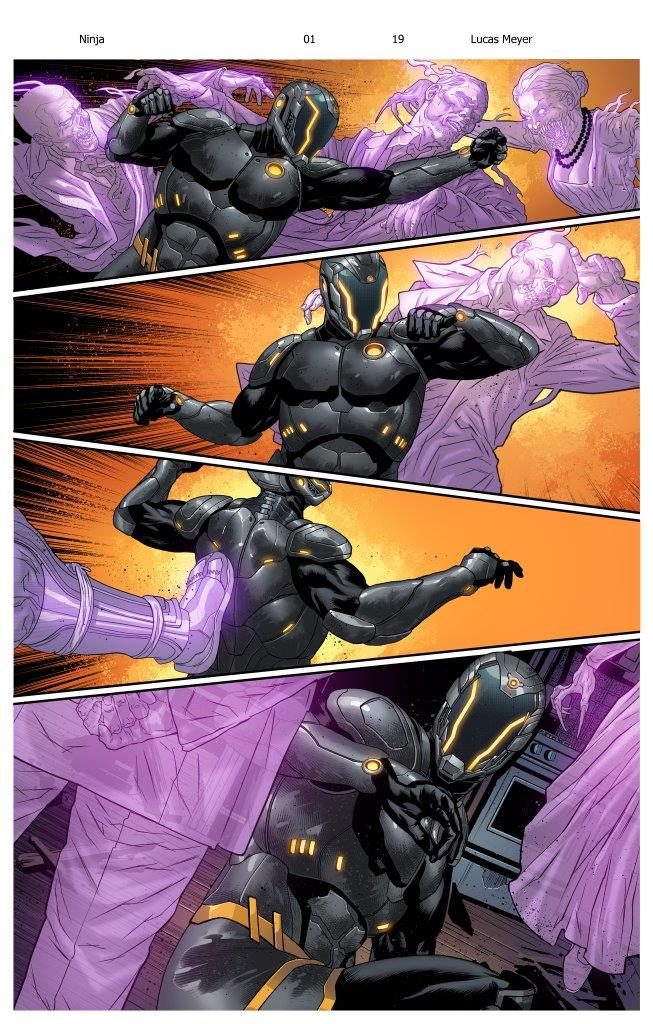 FS: What made BlackBox Comics the perfect home for Ninja Kaidan?

EP: The publisher came to me with the idea that eventually became Ninja Kaidan, and I really appreciate BlackBox taking a chance on me and trusting me to take this story in a somewhat oblique direction. I hope–I think–the result is like nothing else on the stands. It’s bonkers, but I really love the story we’re telling here.

FS: Do you have any other projects coming down the pike you want to plug?

EP: More Black’s Myth is coming from Ahoy Comics at the end of the year! [Artist] Wendell [Cavalcanti] just turned in the first issue of Volume 2, and he’s leveled up!

I also have a 4 page story with artist Joe Hunter in Mad Cave Studios‘ Lower Your Sights Ukraine benefit anthology, which is coming soon to your LCS.

FS: If you had a final elevator pitch for the book, what would it be?

EP: It’s like you said already. NINJAS. VERSUS. GHOSTS.

Not even a lifetime of martial arts training and years as an elite soldier could prepare Yuki Snow for this newest challenge: CEO of his deceased father’s company. Suddenly thrust into a leadership role at YOKAI Consolidated, Yuki finds himself taking over his father’s pet project, the mysterious KAIDAN armor, which would allow its wearer to see, speak to, and touch GHOSTS.

And from the official press release:

Martial Arts Mayhem with a Supernatural Twist in Ninja Kaidan

New York City, NY (April 11, 2022) – After bursting onto the comics scene in 2017 with acclaimed series, I.T., The Secret World of Modern Banking, BLACKBOX COMICS have continued to deliver exciting new creators and content on a monthly basis.

Now, to coincide with their fifth anniversary, BLACKBOX is taking the next step in their evolution with the launch of a brand new ongoing series as they join Diamond Comics’ FOC (Final Order Cutoff) program.

Debuting in July, Ninja Kaidan, brings together the creative team of writer Eric Palicki, artist Lucas Meyer, colorist Michael Bartolo and letterer Dezi Sienty – under the watchful eye of BLACKBOX editor, publisher and creator, Dimitrios Zaharakis – to tell the story of Yuki Snow, an unlikely ninja who faces an even unlikelier foe… GHOSTS.

“This is absolutely the most bonkers script I’ve ever written,” says writer Eric Palicki (Black’s Myth, Atlantis Wasn’t Built for Tourists). “It leans into the traditions of comics and action movies of the 1990s, formative material in my evolution as a storyteller.”

Not even a lifetime of martial arts training and years of military service can prepare Yuki for his latest, and perhaps greatest, challenge when he inherits Yokai Consolidated, his estranged father’s company. Yuki quickly becomes fascinated by his father’s pet project, the miraculous Kaidan armor, which allows its wearer to see, hear, and even touch ghosts! As he struggles to unravel the mystery of the armor and its purpose, Yuki finds himself facing foes, living and dead, who will stop at nothing to take it for themselves.

According to Palicki, “This is a story about ninjas versus ghosts, but it’s also the story of a son stepping out from under his father’s shadow.”

Readers can get their first glimpse of Ninja Kaidan in this exclusive new trailer, as well as these preview pages and covers from the first issue.

“Lucas [Meyer] was born to draw frenetic action, and he brings this story to life beautifully,” says Palicki. “I think people are going to be blown away by his work.”

Fans are encouraged to pre-order the series now from their local comic book shop (use comicshoplocator.com to find the nearest one) or at the BLACKBOXCOMICS.NET website – and digital copies can be purchased via comiXology on Amazon Kindle. Don’t miss this exciting new chapter in the BLACKBOX COMICS universe!