It’s no secret that the Earth’s environment has seen better days, and that’s putting it mildly. Scientific reports recently released suggest that if we don’t curb our pollution of the planet soon, there may be no reversing the damage. That’s why now, more than ever, we need role models for our younger generation to impart the importance of being good stewards of our environment.

Ms. Bookless spoke with us about the concept behind Captain Green and the Plastic Scene, the qualities that make Captain Green such a good role model for children, and why everyone needs to learn about protecting the environment. 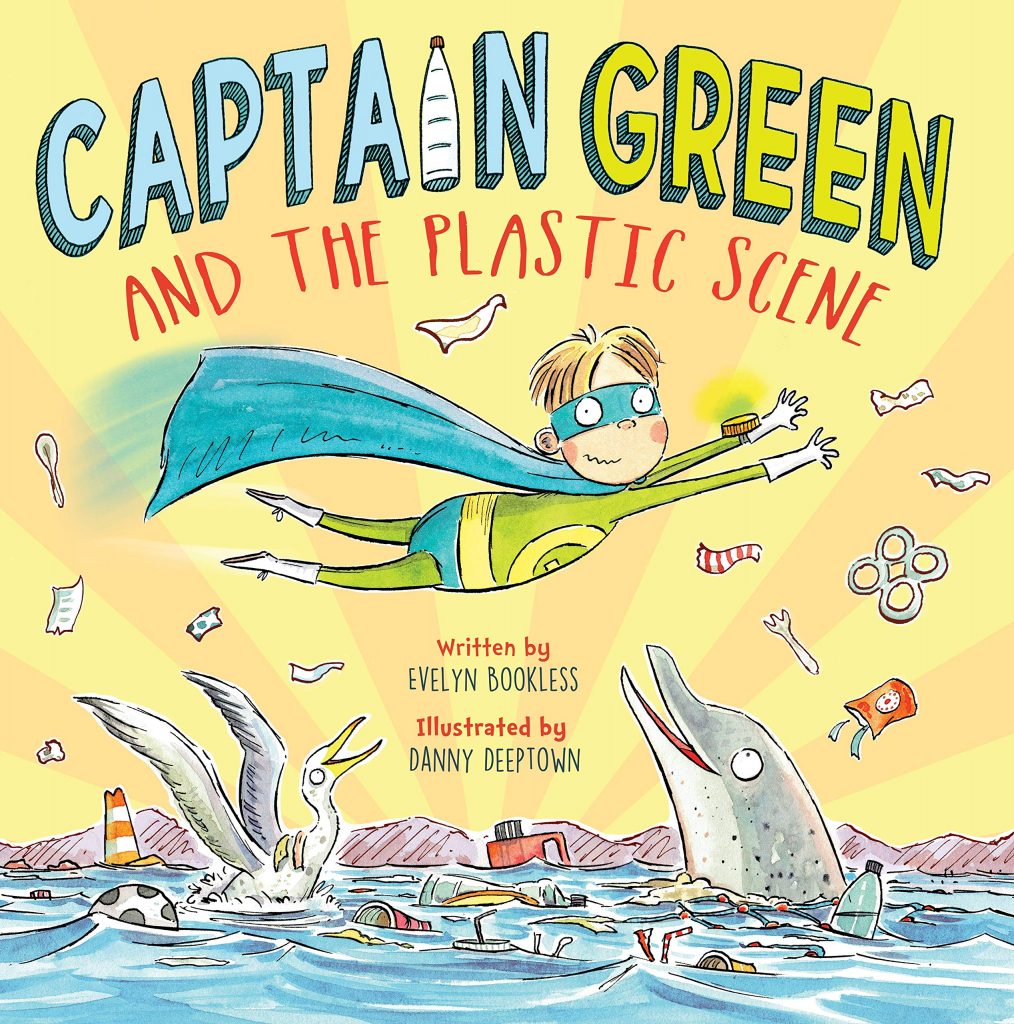 FreakSugar: For readers considering picking up the book, what is the idea behind Captain Green and the Plastic Scene?

Evelyn Bookless: Fresh out of Superhero School, Captain Green, the Caped Captain of Clean, gets a call. Dolphin is tangled up in plastic, and there’s trouble for Seagull and Turtle too. When our brave superhero rushes off to help, he finds himself on a major mission: saving sea creatures from plastic. Using his incredible powers, Captain Green promises to save the day. But can he fix this mess for good?

Kiddies (big and small!) find out how they can be a hero too. Superpowers are not required, anyone can do it!

FS: The story behind Captain Green seems to be one that is personal to you. How long had the idea behind the book been gestating?

EB: Probably four years or so. I love animals and nature and when I started to learn more and more about the way plastic is polluting our oceans and hurting sea creatures, I wanted to do something meaningful to help. I’m a teacher and education seemed an obvious choice to me. 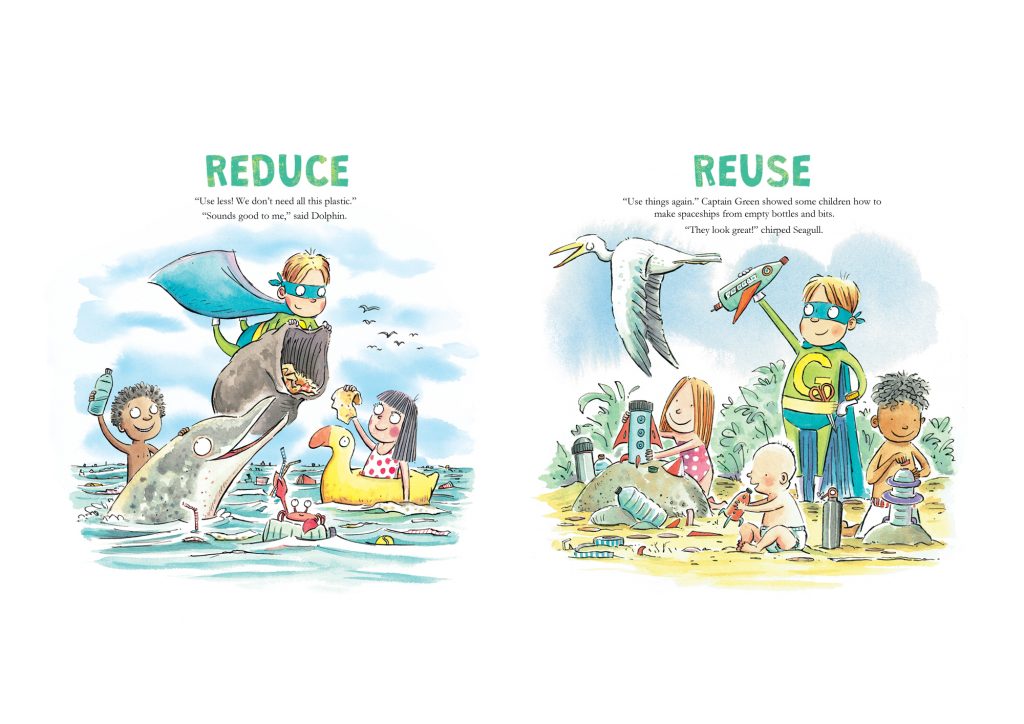 From CAPTAIN GREEN AND THE PLASTIC SCENE

FS: Captain Green’s message is focused on protecting the environment through reducing the products we use and recycling what we can. Why is this such an important at message for young people to see?

EB: I think that this is a crucial message for young people to see because soon enough they will be the guardians of our planet. Also, children can and want to make a real difference from a very young age. When I visit schools, I see children connect strongly to the story. There is one illustration in particular, where Captain Green is comforting Dolphin, that children respond very emotionally to. The love to discuss ways they can help and are bursting with bright ideas to save our seas. I have had such lovely feedback from parents and teachers telling me about the changes that children have made at home and in school to reduce, reuse and recycle plastic.

FS: Following up on that, what can you tell us about Captain Green and the qualities that make him a good role model for children?

EB: While Captain Green is a superhero, and an inexperienced one at that, he is also a kid. I feel that children can relate to him as he clearly doesn’t know everything but is willing to learn. Danny Deeptown, the book’s incredible illustrator, felt that it was important to get Captain Green’s innocence across in the art work so that all children can relate to him, or even better, want to be like him. Captain Green loves nature and does his best to protect the planet. He shows everyone ways that they can help save our seas and empowers us all to do our bit. Afterall, “you don’t need superpowers to save our seas. It just takes a super human!” 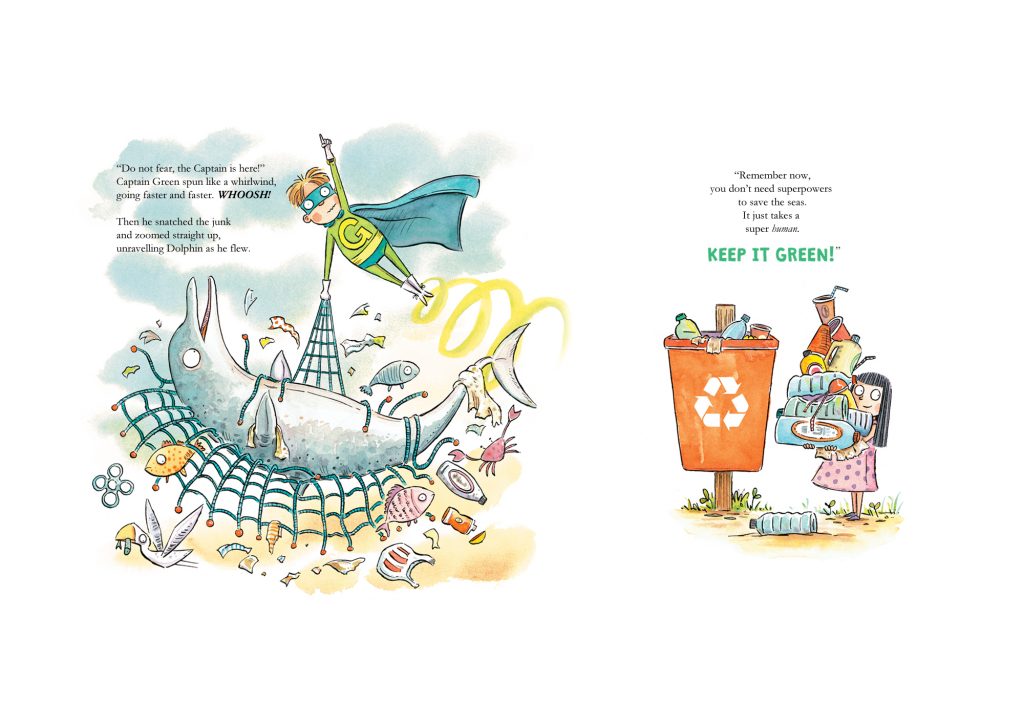 From CAPTAIN GREEN AND THE PLASTIC SCENE

FS: We haven’t seen a children’s book that tackles pollution in the way that Captain Green does. Is that one reason you chose to write it?

EB: I was inspired to write Captain Green and the Plastic Scene while on holiday in Indonesia several years ago. I was saddened by the huge amount of plastic that had washed up on the beach near our hotel. I immediately began writing this story to try to engage children in the fight against ocean pollution. I thought, this pesky problem needs a superhero, and Captain Green was born!

FS:  lessons would you like young readers to walk away with after reading Captain Green?

EB: That if we all make some small changes in our daily lives, we can make a big difference to ocean pollution and the well-being of our sea creatures. It’s not too late.

Captain Green and the Plastic Scene goes on sale January 7, 2019.

Fresh out of Superhero School, Captain Green gets a call. Dolphin is tangled up in plastic, and there’s trouble for Seagull and Turtle too. When our brave superhero rushes off to help, he finds himself on a major mission: saving sea creatures from plastic. Using his incredible powers, Captain Green promises to save the day. But can he clean up this mess for good?

Find out how you can be a hero too. Superpowers are not required; anyone can do it…