Judy Ken Sebben—the daughter of Harvey Birdman: Attorney at Law’s Phil Ken Sebben—was often beleaguered on that series, wanting to use her go-getter, can-do spirit to get things done and done well, often butting against Harvey’s lackadaisical way of practicing law, or in stark contrast with how her father Phil ran his less-than-above-board global company. However, Judy (voiced by Paget Brewster) is taking all of that energy to her new Adult Swim series Birdgirl, doing things her way and trying to right the ship of her father’s irresponsible company now he’s passed away and she’s in charge.

However, just because she’s attempting to take a more responsible approach to running the company than Phil did, that doesn’t mean it’ll be smooth sailing, as she’ll still have to balance her desire to dive into superhero derring-do as Birdgirl with managing a company of the same type of employees—some new, some from the world of Hanna-Barbera—and the absurdist reality that comes along with that.

Still, as executive producers Erik Richter and Christina Miller point out in our exclusive interview, focusing on Judy and her unique perspective, using her as the audience’s point person, has been a joy.

Editor’s note: This interview was conducted just before the Birdgirl season one finale. 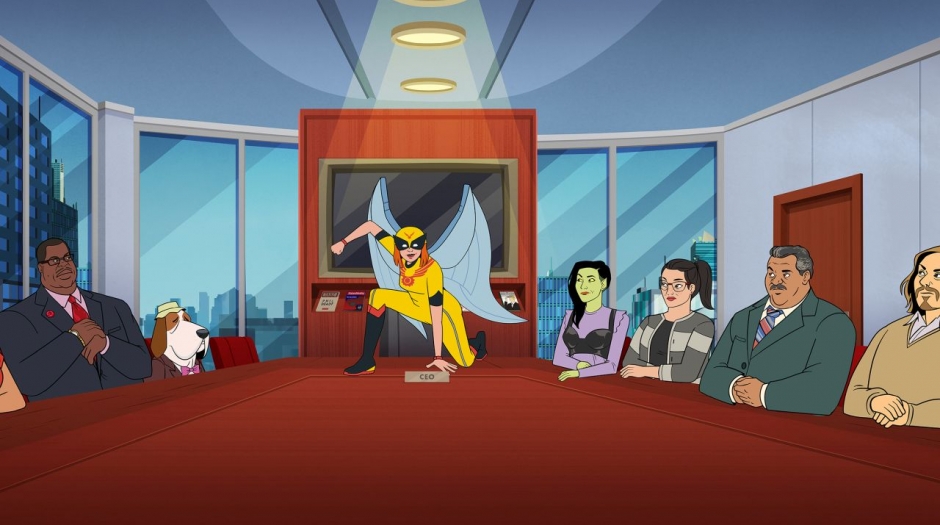 FS: Thank you so much for your time today.

FS: First of all, just got to get this out of the way: I’m a huge Harvey Birdman and Birdgirl fan, so this is a big treat for me. So thank you.

ER: What’s wrong with you? [laughs]

FS: Oh, there’s so many things, but we don’t have that kind of time today. [laughs]

FS: So, Birdgirl. She was such a staple on Harvey Birdman. For folks who might not have caught any episodes of Birdgirl yet, what can you tell us about the new status quo for her on the series? Why did you choose Birdgirl for a spinoff series?

ER: Well, yeah, first of all, we would like to think of it more as a re-imagining, you know, we were, we were cognizant of the fact that people love the old Hanna-Barbera characters and regulars on Harvey Birdman and we do too.

But the bigger idea, I think, when we started kind of flushing the show out was it’s sort of a generational thing rather than ”Oh, Judy existed on Harvey.” It’s more about what world is she in now, in the 21st century, that led to her dad and his generation creating this screwed-up corporate hellscape.

It’s left to this generation to sort of clean it up. So it’s like, “Congratulations, you’ve inherited this company. Also, it’s a complete disaster.” [laughs] 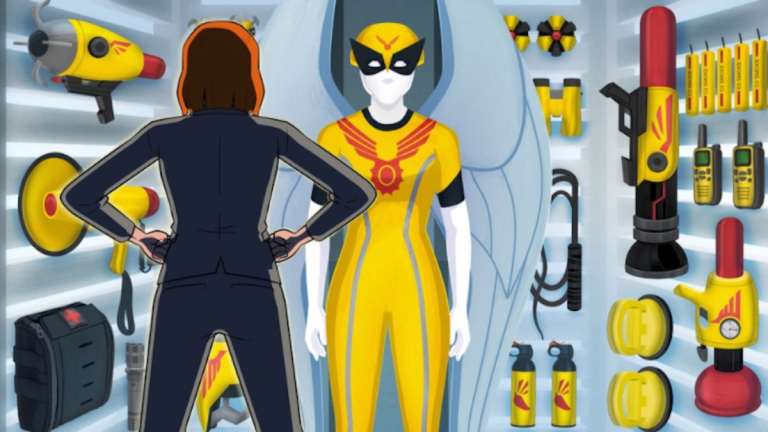 CM: I’d say it’s that and coupled with the fact that, you know, anytime you could give Paget Brewster [the voice of Birdgirl] more room to run, you’re going to get more funny. We were all just acutely reminded of that when we did the Harvey Birdman special (in 2018) just how great she is and how much life there is in that character.

And it got us to just talking about at that moment in time. “Well, wouldn’t it be fun to do something centered around her, at this moment in time?” And then from there, Erik is saying that we could reimagine her world and building a world specifically for her around her in the moment in time. At that moment, we’re all in right; it was just an opportunity that was probably good to pass up.

She astounded in Harvey and she continues to; she’s so tremendously talented. We had a YouTube premiere stream and the amount of love that were in the comments: I mean, I knew people love her, but there are a lot of people who do. We do, too. 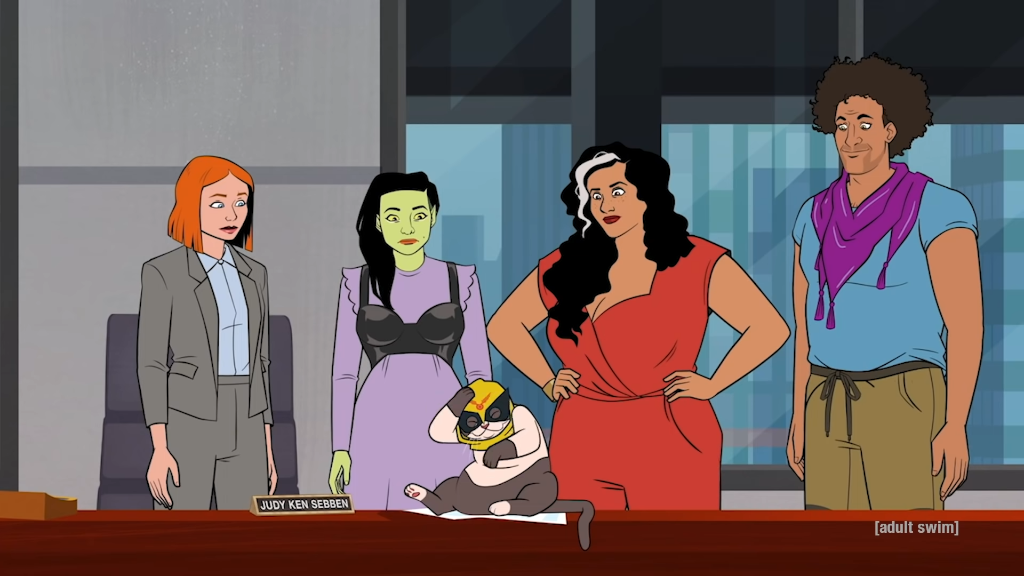 FS: She’s so great on Birdgirl and Criminal Minds and Community. A lot of people don’t mention her being on Community a lot, but she was fantastic on it.

CM: Well, for some reason people mentioned Friends more than Community, which is always interesting to me, too. But you know, she’s such a body of work. Maybe it’s just hard to choose from, but I’m glad that people choose Birdgirl.

FS: So, like you said, it’s kind of a reimagining, we have a new status quo, we have a new cast of characters. What was the creation process like and what needs of the show and the narrative do the characters fill?

ER: It was very obvious from the early earliest point that it’s going to be a workplace comedy. And so we just started imagining, well who have been the coworkers that she has been sort of stuck down on the lower floors with in the bowels of this building and who these people are.

Also, what does it mean now that she’s just been thrust into this new role from sort of functionary in the company to running the company. And we didn’t see it in Birdman, but Mentok’s daughter, she’s Birdgirl’s best friend. We don’t know from when. They’ve been friends a long time. 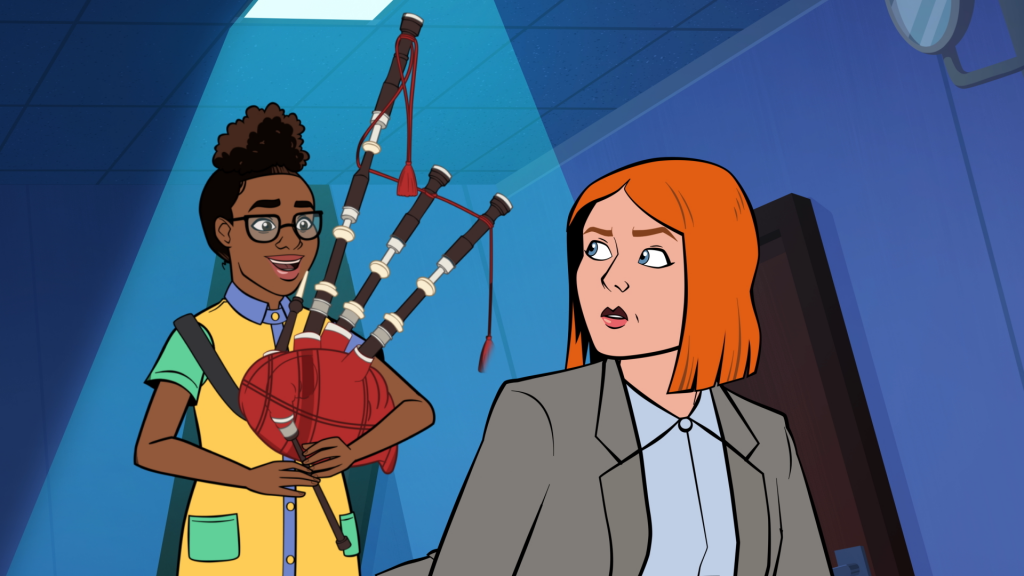 CM: And then also looking at it is like knowing that the company has been enormously sprawling hellscape, as Erik put perfectly. There have been characters hanging around there for a while that we wanted to make sure were part of the show and then new people that Birdgirl brings in. It’s much like any other workplace; it really is like workplace comedy centered around Judy.

FS: One of the reasons I love about Birdgirl’s character is that I can relate to her wanting to do all of the things. You saw that in Harvey Birdman, but she stretches her legs with that in this show. How do you tap into that for this series?

CM: It’s great that you sort of zero right in on that because there was definitely a lot of the conversation around the world that she was in. You didn’t get to see all that in Birdman because she was there sometimes, but she wasn’t always there. Giving her the spotlight gave more room for Paget to stretch her legs, so you get to see the whole spectrum of who the character is and how conflicted she is.

What she really wants to do is be a superheroine. That’s all she’s ever wanted to do right and now she’s running a company and that’s getting in the way. So you see the whole spectrum of her wanting to do good and which form is she going to do it in and how many levels of complicated that can get and really get to show the range that Paget has as a result of that. 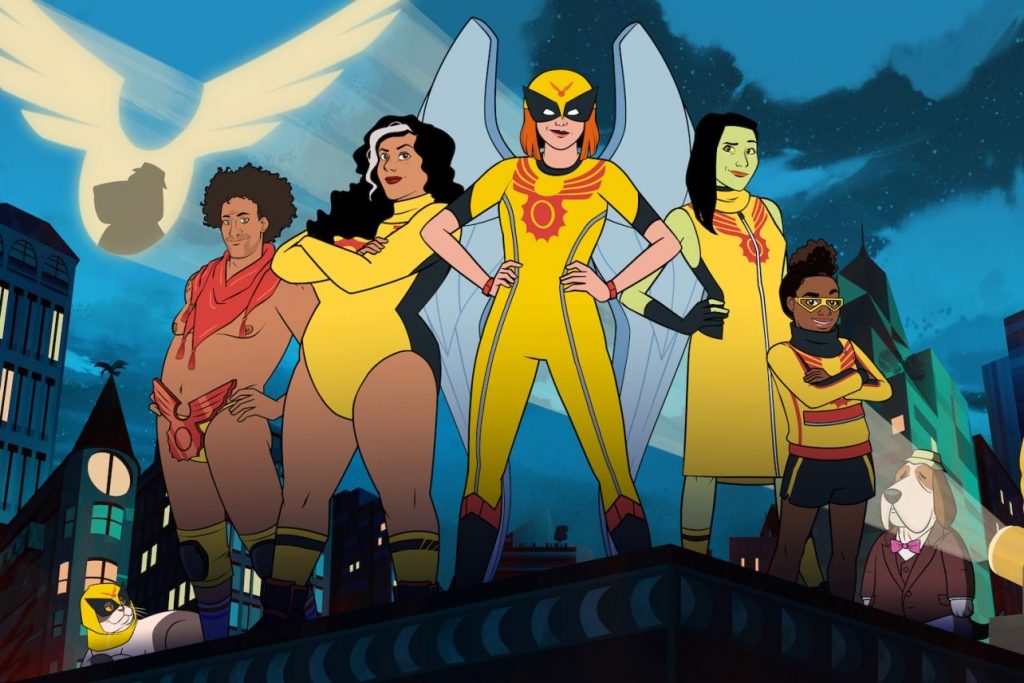 ER: Yeah, and Christine brings up an interesting point like in her new role she has to be guarded and everything moves very slowly as the CEO of a company and just when you fix one problem you think, 47 others pop up in this place. And so it’s very frustrating to somebody like Judy.

So her day job is very frustrating and Birdgirl, the persona has never been more important to her because that actually is something where she allows her not to ask questions and just get shit done, for lack of a better term. There’s not there’s not a lot of bureaucracy being Birdgirl. So it’s kind of a fun interplay between those two personas.

CM: Especially as she starts to realize every single episode or every single moment of the day about this sort of irresponsible nature of how her father built his 20th century sort of company and products and profit and practices and all of that stuff. It gets more horrific as time goes by, her realizing all the damage that was done there. 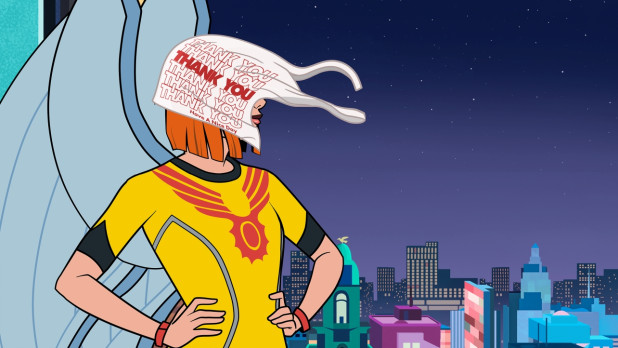 FS: Is there anything that you would like to tease for the finale?

ER: I think the finale episode does give teases. There’s a tease that there is a future in this world that was previously unknown to Judy. There are plans that were her father’s for another community. Um, it was your father’s doing and sort of the apotheosis of all of the crappy misdeeds that his generation has left our generation.

So yeah, there’s a very fun second location outside of the city that Judy has to go to and clean up literally.

CM: There’s definitely that moment of realization that there’s a lot more to clean up than what we get in the first episodes.

The season one finale of Birdgirl aired this past Sunday on Adult Swim. Here’s hoping more Birdgirl is around the corner!