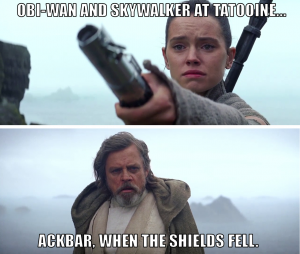 I somehow missed it when it first started circulating back in January, but I recently came across a paired set of still images from Star Wars: The Force Awakens. It’s from the end of the movie as Rey hands the lightsaber over to Luke. Her caption is “Obi-Wan and Skywalker at Tatooine” and Luke’s response is “Ackbar, when the shields fell.” It’s an interesting image because it requires knowledge of three movies and a TV show to fully decipher.

One of the better episodes of Star Trek: The Next Generation was entitled “Darmok.” The crux of the story revolves around Captain Picard trying to survive on a hostile alien environment alongside an alien who he can’t understand, despite his communicator translating everything into English. The conceit was that the alien spoke entirely in metaphors which, absent of cultural context, mean almost nothing to Picard. The story was an excellent look at how we use cultural shorthand for complex situations and emotions. And it’s necessary to recognize the construction of that alien language from the show to understand what this image is trying to do.

Then, of course, the viewer needs to have seen the Star Wars movies A New Hope, Return of the Jedi, and The Force Awakens to understand how to interpret the actual meaning. The Obi-Wan/Skywalker reference refers to the meeting of those two characters in the first movie, and how Skywalker then started learning how to use the Force from Obi-Wan. The Ackbar reference, meanwhile, calls back to the relief and surrounding excitement the character displayed  in the third film. Lastly, of course, the scene itself is from the most recent movie in which Rey is hoping to learn how to use the Force from Skywalker who, according to this image at least, is relieved and excited she’s found him.

Now, consider that I just used over 200 words to briefly try to describe what’s going on in that image. If you were familiar with all those references, though, your brain was able to parse through all of that same background information (and more!) is less than a second as soon as you saw the image. That speaks to at least one of the reasons why more and more people refer to abbreviated movie quotes and references when talking with one another; they can communicate much more and much more quickly by using a shorthand they know their friends are familiar with. Furthermore, it masks the meaning and intention from those who might be eavesdropping. The heavy use of pop culture metaphors can be just as indecipherable as a foreign language.

And while it’s certainly possible to learn pop culture, just as it’s possible to learn a foreign language, the number of references is increasing dramatically on a daily basis. Not only is there more media available than there used to be, but it’s become so fragmented that it’s difficult (if not completely impossible) to keep up with everything of significance. So while any single reference is easy enough to learn, the complete set of references that might be called upon (witness four references alone in the above meme) is not.

Communication, as always, is a key in bridging gaps between groups. I don’t know how big the intersection of Star Wars and Star Trek fans is, but any problems that come up between them might be resolved if we all took a step back from our own personal points of reference and made a point to use broader ones that everyone is familiar with.