Back in 2008, I went looking for various solutions for storing my comics collection. I had just inhereted my father’s old collection, essentially doubling what I had. So in hunting down storage ideas, I turned to the internet. Most of what I found were pictures of closets and basements with stacks of long boxes. The better-looking ones had placed the white cardboard boxes on some sort of shelving units, often steel or aluminum utility shelving, but it still looked like a bunch of cheap cardboard boxes.

A few individuals passed on the cardboard boxes altogether, and used other solutions. Some simply filed their comics like books on a bookshelf. Even more rare was somebody using some other creative (often custom-built) option to display their books. These were attractive, but exceptionally rare. 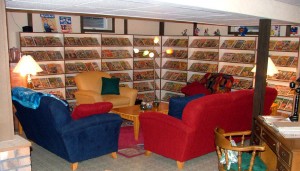 The following year, I reworked my personal library. It became infintely easier to find things I was looking for, but was still built around cheap cardboard boxes and I, too, stacked them on utility shelves. But last year, I moved and was able to reconsider how my library was organized. So I started looking around again online and found a great deal more. While the long boxes weren’t gone entirely, their appearance was much diminished. Both in the number of pictures showing them, and in the amount they were visible in people’s rooms.

There were now multiple companies producing finished cabinetry designed around comic books’ dimensions, and some people had purchased those. Others had gotten magazine-style holders to rest their comics on a bookshelf. Still others had built entirely custom solutions from the ground-up, or modified existing pieces to better suit a comics’ size. There was a greater variety of displays, and they all looked much more attractive than what I had seen just a few years earlier.

So what changed? Much of what’s seen now could have been done decades ago. I think there are two semi-related factors at play.

First, there’s been an increased attention on geek culture. Before the mid-2000s, it was still largely considered a small sub-set of the overall population, but businesses began realizing the huge potential in marketing to often built-in fanbases. Once they did (thanks in large part to the success of the first X-Men film in 2000, and the Spider-Man film two years later to prove X-Men wasn’t a fluke) they began targeting fans more seriously. Consequently, there have been more and more commercially available products made available that fans can choose from.

Related to that, the increased production of these options generally means that their prices come down. Which means more fans can afford nicer materials. Comic fans are no longer limited to cardboard boxes and, while other options still don’t come quite as cheaply as them, they’re far more affordable than they used to be.

It’s not just comics either. Fans of all sorts are catered to now in ways that they weren’t even ten years ago. You could argue that it’s simply crass commercialization of beloved characters and properities, but regardless of the motivation behind companies’ push of these better materials, it makes for a better quality of life for all fans.