Welcome to the first installment of Fanthropology, a bi-weekly column talking about fans and fandoms. Regardless of the genre or medium, people fall in love with their favorite characters and stories. And how that manifests itself ranges from collecting to drawing to cosplay to filking to who knows what else. Even though you might think all those Twilight fans bear no resemblance to a Worlds of Warcraft fan, there’s a somewhat surprisingly similar set of influences and behavior patterns at play. 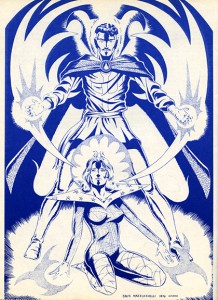 If you’re at all familiar with Mazzuchelli’s work on superheroes like Daredevil or Batman, or particularly his more current personal work like Asterios Polyp, you might not recognize his linework here. That should be understandable if you can see the date he inscribed near his signature, placing this a full decade before his run on Daredevil. Mazzuchelli would’ve still been in his mid-teens in 1976, so it’s no surprise that his personal style would evolve. But this piece was published in the fanzine Fantafolio #3.

Fantafolio was a product of a group called InterFan, a group that remains active to this day. Besides Mazzuchelli, it’s included among its members professionals like Jerry Ordway, Rick Burchett, John Beatty, Dave Sim, Sam De La Rosa, and Karl Kesel to name a very few. Going through other fanzines, you can frequently find other names like Denny O’Neil, Roy Thomas, Mark Evanier, Dave Cockrum, Kurt Busiek, Tony Isabella, and countless others. Why do you suppose that is? Were fanzines a stepping stone towards becoming a professional comic creator? Yes and no.

“No” because obviously not everyone who contributed to fanzines went on to become a professional. I was talking with someone just last week about how Grass Green, though very talented, never really broke into the industry. I’m also a big fan of Ron Foss’ work, although he had even less success in comics than Green did. They never really “graduated” beyond fandom.

“Yes” though because fanzines were a sort of proving ground for many aspirational creators. They were able to see their work published (on a small scale) and receive important and critical feedback for improvement. It gave them a taste of the professionalism they’d need to adopt once in the industry, so the work ethic required once they got in wouldn’t be a shock.

But I think that very issue of Fantafolio hits the nail on the head. Here’s an excerpt from the issue’s introduction by Jim Bertges…

There is something inside us that tells us we must draw, we must write, we must put down these images because there is someone somewhere who wants to see them. Someone may get some joy from them or some information or ideas. We are driven by that pleading voice inside. It tells us that sometime, somewhere, these things we’ve put on paper will be seen and understood and enjoyed by someone who perhaps we will never know, but who is like us. We work for you.

And while this is all specific to comics, Berges is right that it applies everywhere. He continues…

That, put very simply, is why there is an InterFan. It is also the reason there is any fandom at all; we all have something we need to say. We are no different than other fans except, perhaps, in the fact that we are slightly organized.

We all have something we need to say. And those folks who first said it in fanzines just wouldn’t shut up. They kept going and going until finally someone relented and started paying them to say something.