Readers of superhero comic books have become very savvy in terms of storytelling. More and more, it’s becoming difficult to surprise them because of the Illusion of Change. First and foremost, comic books are a business. Your beloved superhero character might die in a story or change his outfit or powers, but, at the end of the day, if that character is a cash-cow for the company, those changes, on the whole, will be temporary. Big Change with a capital C rarely happens and, if you were to ask a comic book writer for one of the larger companies, they might tell you that the journey a character goes through during a period of flux and alteration is more important than the death or superficial costume adjustment.

More than just the journey a superhero goes through during this time, however, we also get to see, if the writer is particularly adept, how the character’s changes affects his or her supporting cast. Do his friends look at him in a particularly new light? Does the dynamic between the hero and her villains become lopsided? In honor of Marvel’s Daredevil entire season 1 hitting Netflix today, I thought I would examine just that question as viewed in one particular scene of writer Frank Miller’s classic Daredevil story “Born Again.”

In the mid-1980s, Miller penned a tale that brought attorney Matt Murdock, the superhero vigilante known as Daredevil, to his lowest ebb. Wilson Fisk, Kingpin of crime, Daredevil’s most ruthless adversary, discovered Murdock’s secret identity through information fed to him up the chain of low-level crooks and minor crime lords. Murdock’s former girlfriend Karen Page, who knew of Matt’s double-life, had gone to Hollywood to pursue acting years earlier. After falling on hard times and becoming addicted to drugs, however, she sold Murdock’s identity, desperate for a fix. Through that chain of events followed one of the most systematic dismantling of a superhero’s life in the history of comic book storytelling.

Fisk uses his knowledge of Daredevil’s secret life as an attorney to slowly leave his life in ruins, exerting his far-reaching influence to have Murdock’s assets frozen, his apartment foreclosed on by the bank, and being framed for asking a witness to perjure himself. While Murdock manages to stay out of jail thanks to his law partner and friend’s help, he’s disbarred in the process. Homeless and drifting the streets, Murdock is pursued by the Kingpin’s informants, feeding the Kingpin details of Murdock’s slow descent into madness and further ruin. Matt finally squirrels up the nerve to confront Fisk, who he knows is behind his destruction, but, in the fragile state he’s in, he gets his ass handed to him for his trouble. To keep the connection to him a mystery, the Kingpin has Murdock handcuffed to a taxi, which is pushed into a river. While he manages to get to safety, Murdock’s recovery is slow and uncertain.

Almost 30 years after this story was written, the breadth and depth of the tale’s impact still packs an emotional punch. I can’t imagine how fans who read the story as the individual monthly chapters filtered in felt as they marveled at Daredevil being brought down to his lowest point. Taking it in after the fact, I knew that Murdock made it out alive, and I’m sure fans assumed he would come through the other side, but there’s always that air of uncertainty. Today, in a comic book world where Thors and Supermen die and are reborn, where Batmen are broken and replaced, where X-Men are resurrected every other month, the idea that Daredevil’s greatest enemy destroyed him so utterly and completely, physically and mentally, must have been a punch to the gut to readers when the story first debuted.

While this story certainly was an unexpected revelation, for me, the primary impact from the tale stems from how the Kingpin’s discovery of Daredevil’s secret identity changed the power dynamics between the two characters. At first blush, it appears that the information would forever give the Kingpin the upper hand on his adversary going forward and, to an extent, that is somewhat true. Even today, Fisk is fully aware of Daredevil’s secret identity. It’s always a card in his pocket he can play at any point, putting Murdock at a distinct disadvantage. However, what we learn about the Kingpin and his vulnerabilities and fears is equally as telling.

After the Kingpin discovers that there was no corpse found in the submerged taxi where Murdock was left to die, he obsesses on this fact as he works out in his personal gym. What we find out that is going through the Kingpin’s mind as he lift his weights shows what a threat Daredevil is to him.

For six hours this thought has been ringing through his skull, the man he thought he’s murdered, so exquisitely, so painstakingly relishing every precious step…

…from Murdock’s ruin to his emotional dismemberment—

–to that moment of savage ecstasy, when the Kingpin’s fists tore through him, cracking bone…

…the man he thought he’d murdered is alive.

Six hours. Spent sweating and straining, seeking the limits of his own inhuman strength, seeking a place past the thought.

What is it about Murdock? He was a minor concern—a promising talent to be observed and catalogued and even occasionally flattered—

–and perhaps, one day, to be turned to the Kingpin’s way—

And I—I have shown him…

…that a man without hope…

…is a man without fear. 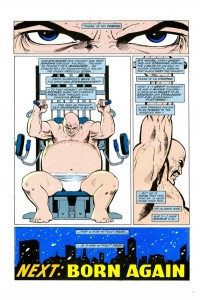 There are certain passages throughout pop culture and literature that, when I come across them, I get chills. This scene with the Kingpin is probably at the top of the list for several reasons, primary of which is how present Daredevil is in the scene without ever physically appearing. The Kingpin of crime is one of the most feared men in the Marvel Universe, with his hands in many pies and his connections and influence far-reaching. Physically, he’s imposing, holding his own against the likes of both Daredevil and Spider-Man. And yet, here he is, afraid, although he would never admit it, of a man who he pummeled to with an inch of his life, eviscerating the hero mentally and physically. The Kingpin sees himself as untouchable and above the law, but, when the gravity of the situation reveals that some men like Murdock are just as much a force of nature as he is, the thought consumes him. Even more so than the Kingpin has gotten the upper hand on Daredevil going forward after learning his secret identity, the real winner in this struggle of wills is Murdock. Daredevil is the one man who won’t cow-tow to the Kingpin’s machinations and who will always get back up when Fisk knocks him down. He is truly a man without fear.

That’s it for Flashback Friday. Here’s to getting knocked down seven times as long as you stand up eight. Enjoy your weekend and remember to catch Daredevil on Netflix!