As I discussed last week, when it comes to a character like Superman, it’s very difficult to reinvent the wheel and make him fresh for modern audiences. The fact of the matter is that, aside from the superhero being a corporate character who has to stay somewhat static, the main impediment to Superman being allowed to change and surprise readers and fans is those readers and fans themselves. While how much we know about the character might change from person to person depending on their interest level in the Man of Steel and by which media they were exposed to Superman, most folks have a basic idea of who the Last Son of Krypton is at his core:

Was I right? With a few variations, is that what you think of when you think of the Boy from Smallville? I’m willing to bet yes. Put a bow on it in the form a red and blue costume and you got yourself a Superman. And that can be a problem for readers and creators alike, again as I discussed last week. How can you add dimension to a character so entrenched in the cultural zeitgeist while still keeping the character who he is fundamentally.

A few folks have given it a shot, none as successful, in my opinion, as writer Mark Waid and artist Leinil Yu, the creative team behind DC Comics 2003 12-issue miniseries Superman: Birthright. In what can be considered a “soft reboot,” Waid and Yu took elements of the origin of the Metropolis Marvel from a variety of sources—different eras from the comic books, the Christopher Reeve films, the Smallville television series—to give readers a Superman who was both recognizable and someone who could still surprise audiences. 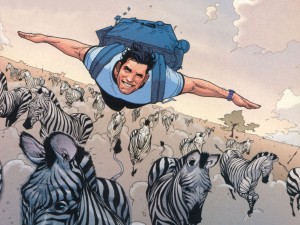 Clark making friends during his journey around the globe

I read Birthright as the monthly installments hit my local comic book shop and I devoured them as soon as I had free time to give an issue a read. Waid’s interpretation of Clark Kent didn’t brush away the legacy that stories of his exploits had established, but instead were fleshed out in a way that could appeal to longtime readers and the most casual of fans. For instance, we know that Clark chose to become a reporter so he could be close to the action and know what dangers were befalling the Metropolis and the world at large. However, in Birthright, we encounter a young Clark traveling the world, wanting to learn from it and, in the process, becoming affected by it. He files reports to various digital newspapers on the fly and gets a taste for social justice. He sees firsthand the inequities of the world and wants to shed light on them. He meets other people who dare speak truth to power and is inspired by their courage. This touch provides nuance to a casual detail of the hero, while also speaking to the Man of Steel’s character and publication history as a social crusader in his earliest appearances in the late 1930s.

My favorite addition to the Superman mythos that Birthright addresses, but is later, sadly, dropped and ignored by future writers, is a further explanation for the question as to why Kal-El doesn’t kill. Killing is a sometimes-heated topic in the four-colored world of comic books. We understand why most superheroes, including Superman, Batman, and Spider-Man, are depicted as they are and don’t dispense with their villains once and for all. Naysayers might contend that the superfolks are contributing to the deaths and heartache of more innocents by letting supercriminals such as the Green Goblin and the Joker live again and again. However, writers and fans argue that letting their heroes kill carte blanche fails to consider the following: 1. Killing criminals denies them their time in court and due process, putting superheroes above the law (already problematic as many are vigilantes). 2. Taking the life of another, even a villain, is wrong and taints the hero as well as the greater cultural consciousness. 3. Killing just one criminal could be a slippery slope for the hero, leading to a dark path that could be difficult to veer away from.

Of course, there are plenty of counterarguments to any of these reasons, counterarguments I’ve made myself on occasion. The fact is that while I agree with the No Killing rule for superheroes on the whole, it’s never completely sat well with me. Why would killing someone be objectionable in all circumstances? Clark Kent, despite being needled Lois Lane about his small-town roots, is not naïve. He’s traveled the world, seen how it operates, and is well-versed in shades of grey. Despite wanting to hold himself to a higher standard and preserve life when so many people don’t, could there be an additional reason for Clark to abstain from giving the final judgment of death?

This is where Mark Waid steps in. As mentioned, Kal-El has a bevy of powers, some of which are sight-related. He can see far away, he’s got X-ray vision, and he’s got heat vision. Waid adds an extra sight power in Birthright, something I’ll call for our purposes “aural vision.” Clark discovered during his world travels that he can see the auras of living creatures. More than that, though, he can see when those auras fade away upon the moment of death. Seeing animals dying and their auras fading deeply moved Clark, leading him to refuse to ever take a life, even going so far as becoming a vegetarian.

Many of us have had loved ones pass away. We’ve seen family members die. We have even seen strangers pass on. That in itself is jarring enough. But to see a person or animal’s light flicker away upon death? That would have to be a disturbing, life-changing experience, an experience that would make understandable Clark’s decision not to take lives at any cost. He has seen the personal costs, the beauty and tragedy of a life-force slipping away. While that explanation could still have detractors, it enriches the storytelling experience, at least for me.

Thanks once again for joining me for Flashback Friday. And a reminder: You don’t need aural vision to see the beauty and good in humanity.

[Further reading: Superman: Birthright is available in paperback over at Amazon.]