Superman is often seen as the mightiest of DC Comics’ stable of superheroes. However, during the “Darkseid War” storyline currently ongoing in Justice League, the Man of Steel is imbued with dark powers, increasing his might exponentially, becoming a veritable god of strength. In the Justice League: Darkseid War: Superman #1, we see that instead of becoming a corrupt overlord, Kal-El of Krypton turns inward and finds himself wanting to be left to his own devices.

I recently spoke with the one-shot’s writer Francis Manapul about “nature versus nurture,” the true strength of Superman, and how the Man of Steel’s relationship with humanity can be both selfless and selfish.

FreakSugar: How do you approach writing Superman who is in his right mind and then, pushing it, one who has been overridden with power? Is there a certain headspace you need to enter that’s different from how you might approach other characters?

Francis Manapul: Yeah, I think with Superman we have a very clear idea of who he is and what he will do for us. Instead of absolute power corrupting absolutely, he’s always had this sense of responsibility and, in this case, that responsibility has been lifted. With that, he seems not happier, per se, but he doesn’t seem to really care. Figuring that part out made it easier to write a Superman who has been corrupted by the lava pits of [Darkseid’s home planet] Apokolips.

FS: That is one thing that’s been running through the “Darkseid War” one-shots, what a hero such as Batman would do upon acquiring superpowers or having them increased so dramatically. However, Superman has always had such a wealth of power. I appreciated that you explored a story in which Superman, in his own way, could breathe.

FM: Yeah, I think that in the story I did for the one-shot, rather than go for the obvious where he’s the most powerful man and flaunting it, it explores what made Superman super in the first place and what made him human. This story really tackles that aspect of humanity, especially for him. The story starts out with Superman trying to prove that he’s the most powerful god there is. Then he’s on planet Earth trying to keep his distance from all the trappings of humanity. He learns that even gods can be lonely and that’s the crux of the story. 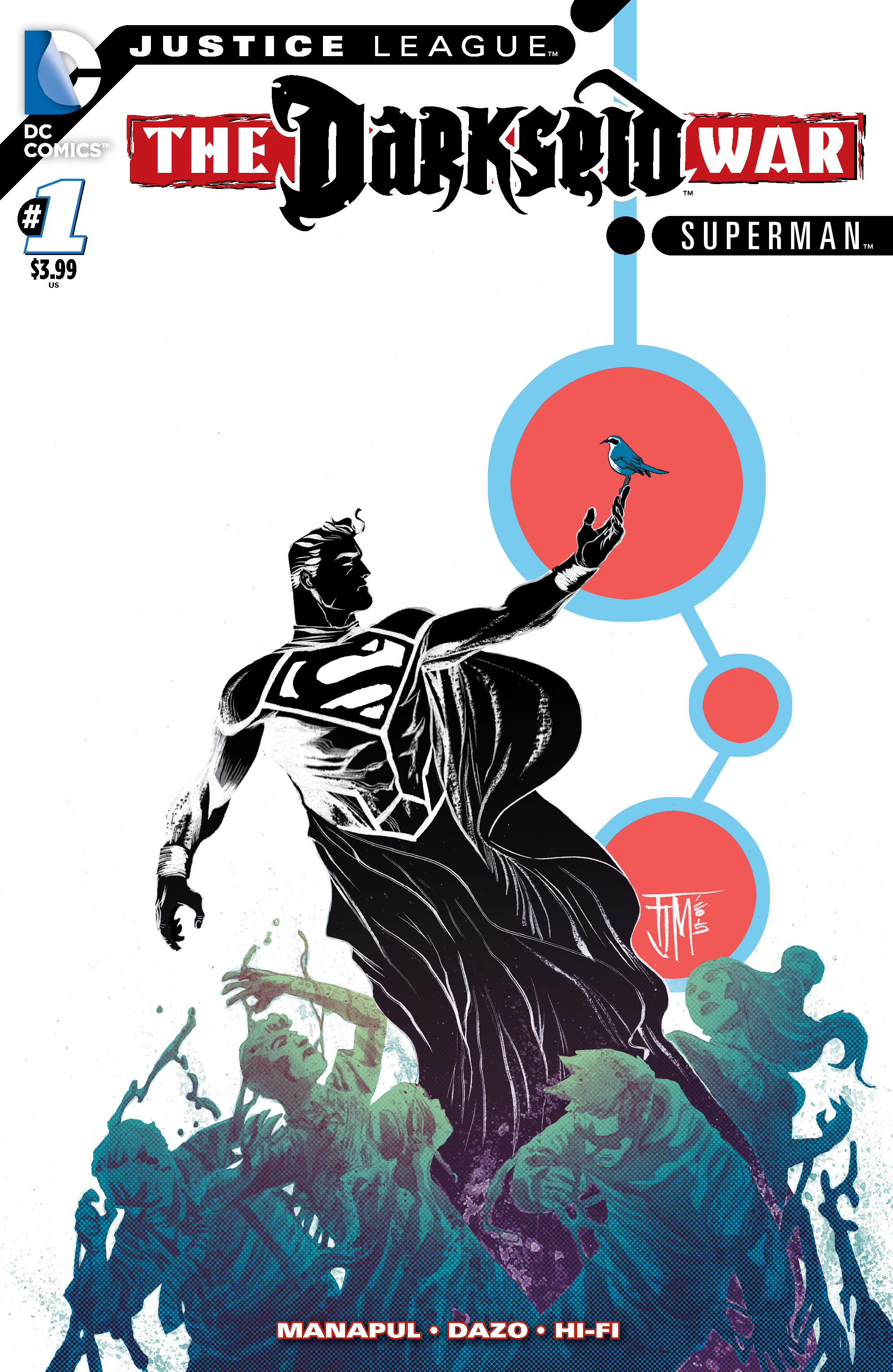 FS: At the beginning of the story, we see Superman fighting a smaller alien using technology to attack Earth to hold his own with the Man of Steel. Once finished, he doesn’t see the need to take the alien to justice. Does that hint that maybe he’s beginning to see the fight for the sake of itself?

FM: I think that was a case of Superman not “finishing the job” because he didn’t deem the alien worthy of his effort. That’s kind of indicative of what the whole story is about. He doesn’t see a whole lot for him to try to do. What led him to move away from this was his reconnection with Jimmy Olsen, a friend and a connection to humanity. It made him realize what he was losing. There was a real struggle within him between being all-powerful and emotionally vulnerable. The liquid goo that leaks out of the alien at the end of the fight envelopes the city, much in the same way it envelopes Superman himself. Once he has an emotional breakthrough, he’s able to act and save the city. It’s a real simple story that’s not continuity-changing where I wanted to focus in on the character and show that Superman was there underneath the darkness covering him currently.

FS: Even if it’s not continuity-changing, I enjoyed the story because it’s in the same vein of those stories that explore why Superman is who he is. One thing I loved in the one-shot was the diner scene that was reminiscent of the scene in the film Superman II.

FS: Was that intentional?

FM: Absolutely! It definitely was intentional. That scene, when I saw it as a kid, really changed my point-of-view of who Superman is. It brought into light, when I was older, how he was brought up made him who was, a human being. The whole story is very much a “nature versus nurture” exploration. He’s very much a kid from Smallville.

FS: Especially thinking about the diner scene, Lex Luthor has often lobbed protests that Superman is the world’s bully, going about as he pleases. Imbued with this dark energies from Apokolips, Superman is starting to take on the attributes of a bully, as seen in how he treats the diner’s customers. That made me think that sometimes we don’t think of Superman as a person and that made he does have resentments, but presses through them to do the right thing.

FM: I think that scene in particular and in the entire one-shot, I wanted to show that Superman’s physically, but weak emotionally with these new dark powers. I think with the Superman that we know, his greatest aspect is not his powers, but that he’s a super, super good guy who’s selfless. Even in that aspect, one of the things I wanted to show in the story is that even though he’s being selfless in his actions in saving the planet, at the end of the day there’s this selfish part of it that he doesn’t want to be alone.

I think that emotion is something we can all connect to. He’s invincible. He doesn’t know if he can ever die. He’ll probably eventually lose everyone he’s love along the way. What kind of connection to humanity do you have when you’re like that? For him, though it seems selfless to save the planet, he needs us. In the story, Jimmy verbalizes that to Superman. Even though Superman is resentful at times for this constant need to save the day, the real Superman knows that it’s as much a selfish act as it is a selfless act.