Look at this Dancing Groot doll. LOOK AT IT. ABSORB THE CUTE! Now tell me you’re not instantly in a better mood.

Folks who saw Marvel Studios’ Guardians of the Galaxy, now in theaters, were instantly enamored of the sapling Groot seen at the movie’s end, dancing his adorable little limbs off as The Jackson 5’s “I Want You Back” bebops in the background. Viewers—myself included—wanted to know why Marvel hadn’t made a Grootling available for purchase as soon as they left the theaters. Well, Funko Toys and Marvel have heard your cries and are releasing a Dancing Groot figurine, open for pre-order soon. 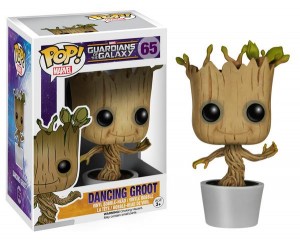 Although the Funko Dancing Groot figure most likely won’t actually bust a move, just like Funko’s other figurines, Penagos does note that this is the first Dancing Groot toy, hopefully meaning that there are other waves of Dancing Groots planned in the near future. In the meantime, I would say that Funko will be inundated with pre-orders from fans who want a little Groot for their office cubicle. Here’s hoping that we’ll get to see more of baby Groot in Guardians of the Galaxy 2: Electric Boogaloo.

Stay tuned to Funko’s official site for more details. While we wait for Funko to release the Groot saplings out into the world, we at least have this clip to keep us smiling.