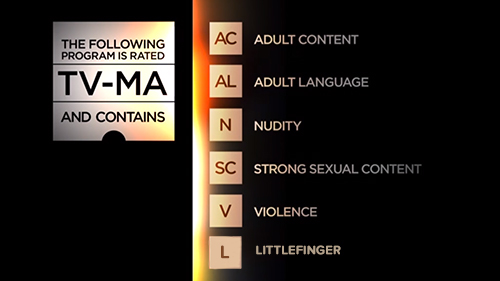 We get to the mature content quickly when we find out that Petyr Baelish/Littlefinger is behind Joffrey’s poisoning and has used the opportunity to smuggle Sansa out of Kingslanding. But not without the help of Ser DontoSHOOT ME IN THE FACE WITH A CROSSBOW oh too late.

Sansa does what she always does and punched Littlefinger in the littlenuts and got the hell out of there! Just kidding, she shut ups and obeys; but it’s hard to blame her because where else is she going to go? Littlefinger then tries to make it a little better by revealing that Ser Dontos’ precious heirloom gift was simply part of his plot. Thanks for spelling it out for us.

Oh ok so the king is still dead. Joffrey’s younger brother, Tommen, (if you forgot about him) will now be king.

It gets super gross and creepy with Jamie forcing himself on Cersei in front of their shitty, dead love child. It starts off innocent enough, with your classic, mom and pop, meat and potatoes, type of consensual incest.

But then, and for some unknown reason, Cersei ends up being the reasonable one and tries to stop it, but Jamie “don’t care.”.

I don’t know about you but I’ve had about enough those two. So let’s see what’s new with Arya and The Hound.

This leads The Hound to ask one of the more important and existential questions that show has offered.

The Hound then agrees to some “fair pay for fair work” thing with the farmer that has taken in himself and Arya. But then he punches the farmer in the face and robs him. Arya isn’t that happy about it, but like her sister, she lacks alternative options, and gets over it after telling The Hound off.

Up at The Wall, Sam and Gilly have a very long conversation about Gilly’s safety among Sam’s brothers. Mostly it was just several minutes of the two staring at each other with mouths hanging wide open. Like this:

Sam concludes that to best protect Gilly from the ravaging desires of the Night’s Watch, he’s going to stash her at the nearby Molestown brothel. Genius! And even Gilly’s baby is like I don’t really know what’s going on but that seems like a pretty bad idea.

Let’s take a moment to clap for Davos and his reading ass. Good job, buddy!

And here’s a reminder that The Red Viper is still debauching his way through Kingslanding.

Tywin interrupts these festivities to ask the prince to be a judge at Tyrion’s murder trial, and in return he’ll give Oberyn a spot on the new king’s small council. It’s not too exciting but here’s the Red Viper looking like a bad motherfucker:

And here’s a bunch of gifs of Ygritte and her band of wilding guerrillas decimating a village for no real apparent reason other than to look cool doing it. Just like when I smoke a cigarette.

Up at The Wall the Night’s Watch gets wind of this attack, but they decide to do nothing about it. Mostly because there’s only like 100 of them left and they couldn’t really do anything about those wilding jerks even if they wanted to. But Jon Snow is looking pretty damn grizzled these days, it’s magnificent.

We finish out the episode on the other side of the world with Daenerys standing with her Unsullied outside the gates of Mereen; the last of the three great slave cities that Dany plans on freeing. As a welcome party, the Great Masters of Mereen send out a lone warrior to make some bad, albeit hilarious, decisions that greatly shorten his life expectancy.

He’s just having a goof!

He then continues to taunt Dany by challenging her to a break dancing battle.

This Great Master is all, “Ahahahah, yes, very good!”

Daario Naharis steps in and reminds Dany that he’s sooo dark and mysterious, and doesn’t give any fucks etc.

So the Mereenese warrior takes off towards Daario.

Dany is all, prove it!

This guy is still charging on his “dumb” horse.

Which is bad idea because this happens:

Which naturally leads to a head getting chopped off.

And Dany is all, I’m def going to hit that tonight.

And then that one Master is all, damn… And that other Master has to sit down like, shit I need to reevaluate my whole life.

Then Daenerys makes a dramatic speech directed to all the slaves watching from the walls. It was a pretty good speech, but rather long, and easiest to  sum up as thus:

That’s it for episode three gifs. Come back next week when hopefully something interesting happens with Tyrion and I won’t have to pretend that he didn’t have a whole scene in the episode.