Have you ever thought about having your head transposed on the head of Siames tiger twins? Or what it’d be like to have a job as a panda cuddler? Norwegian artist Ida Neverdahl has, and she brings that imaginative spirit to her comic Jelly Vampire. Jelly Vampire mixes fun, the unexpected, the surreal, and the journey of growing up, following young teen Lulu Lulusen as she encounters unicorns and cats on her always-changing, never-stale adventures while living a life of “sprell”–of mischief and hilarity. 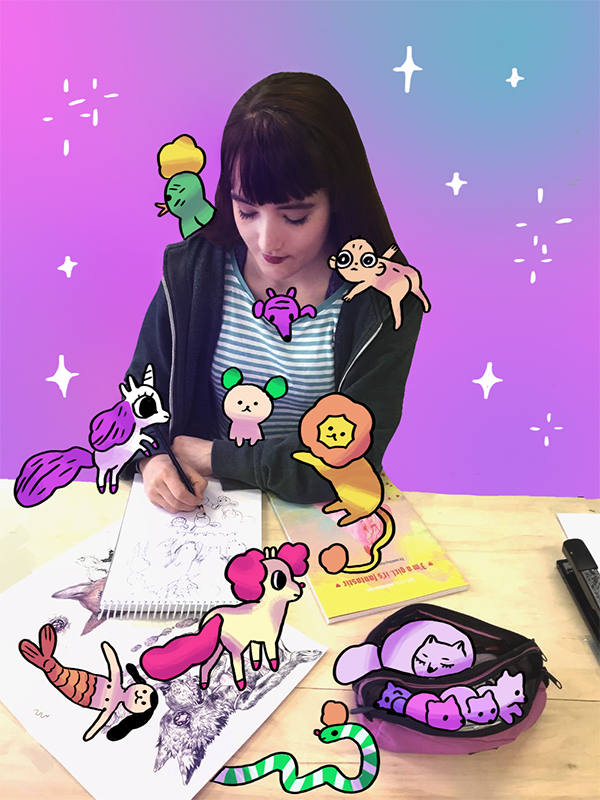 FreakSugar: What is your elevator pitch for Jelly Vampire for folks who are interested in the project?

Ida Neverdahl: The Jelly Vampire Kickstarter’s aim is to produce an English comic book version of my comic Jelly Vampire. Jelly Vampire is a comic about the whimsical life of Lulu Lulusen. The only constant thing in her life is that nothing is. One day she’s a kid battling bullies in the schoolyard, the next she’s abducted by aliens and gets her head put on the body of a pair of Siamese tiger twins. Nothing is too weird, or challenging to Lulu. With the ancient Viking philosophy of sprell in her heart, any obstacle is a new adventure to this peculiar little girl. 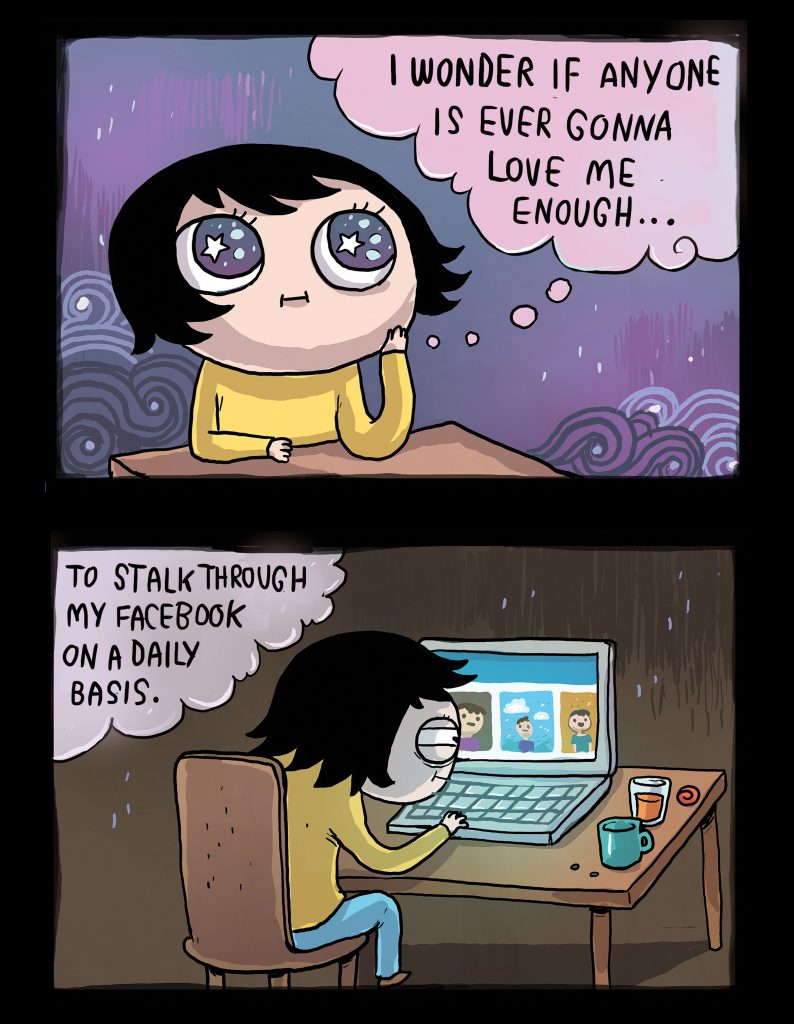 FS: I am sold on everything I’m seeing with the project because it’s something that really embraces the joy and imagination of being a kid. What can you tell us about the genesis of Jelly Vampire? How did the Kickstarter campaign become a reality?

IN: Jelly Vampire was created for a comics contest in 2011. It got third place, and was picked up by a few newspapers. After a while it also started running in one of the biggest comics magazines in Norway, the Nemi magazine. It’s a really neat comics magazine, so it was a big deal to me. This is where the Jelly Vampire world really started to get some jiggle space, because I was allowed to start telling stories over several pages. It enabled me to go from making short, four panel jokes to telling long whimsical stories about whatever fascinated me at that point. Like cheese doodle obsession, having a summer job as a panda cuddler, circus animals and unicorns.

It’s mostly the Emet Comics team and several other people who’ve been working on really realizing the Kickstarter. To me it’s a bit of a mystery. I’ve been very involved in the process, making content and drawings for the campaign and Kickstarter page. But the inner workings of making a Kickstarter campaign has luckily for me been left to the pros. It’s a lot of work. 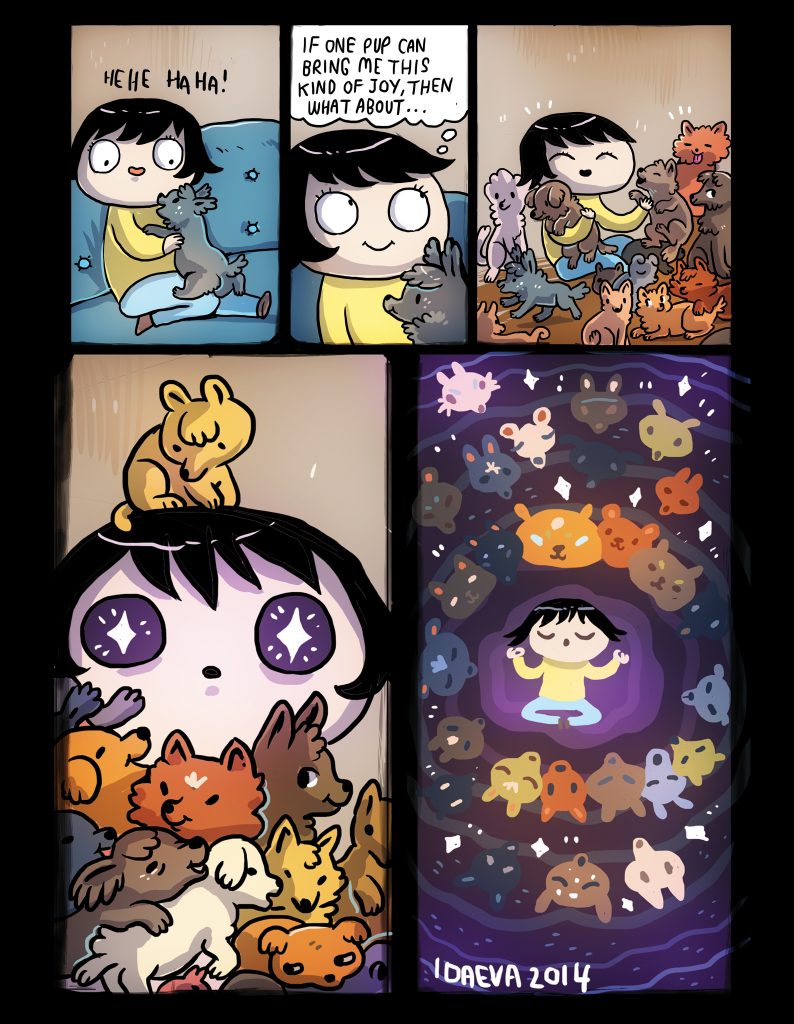 FS: How did you become involved working with Emet Comics for this project?

IN: A few years back my comic colleague stumbled across Emet Comics on Twitter and saw that they were searching for female comic creators. He contacted them and told them about me. Maytal, the founder and CEO of Emet Comics, then contacted me and told me she loved my comics and wanted to work with me. However, I was still in school then, so it took a few years before we could start a project together. It wasn’t before January this year, when I visited the Emet Comics headquarters in LA, that the book project really got going. Since then we’ve been working on making this book, and the last couple of months on putting together a Kickstarter. 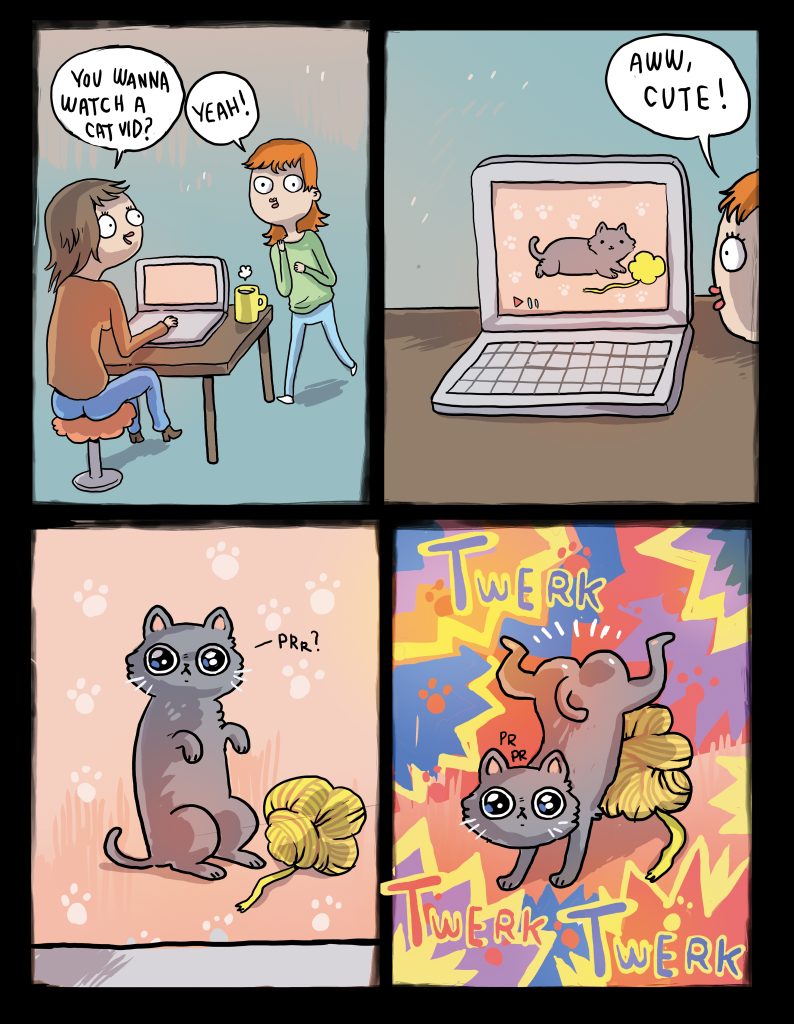 FS: Reading about Jelly Vampire makes me think of comics like Calvin & Hobbes—and I mean that in the best way possible. Are there any particular comic strips or comic books or webcomics that have influenced your approach to Jelly Vampire?

IN: I read a lot of Calvin & Hobbes growing up, so that comic has definitely inspired my comics making. I’ve been reading a lot of comics through the years, who’ve all influenced me in different ways. It’s difficult to choose. I remember having an ah-ha moment when I first started watching Adventure Time though. It influenced my use of colour, my character designs, and also the way I explored and developed my own whimsical comic world. I always made weird, cutesy and surreal stuff, but AT really pushed me over the weirdness edge and I’ve stayed there ever since. 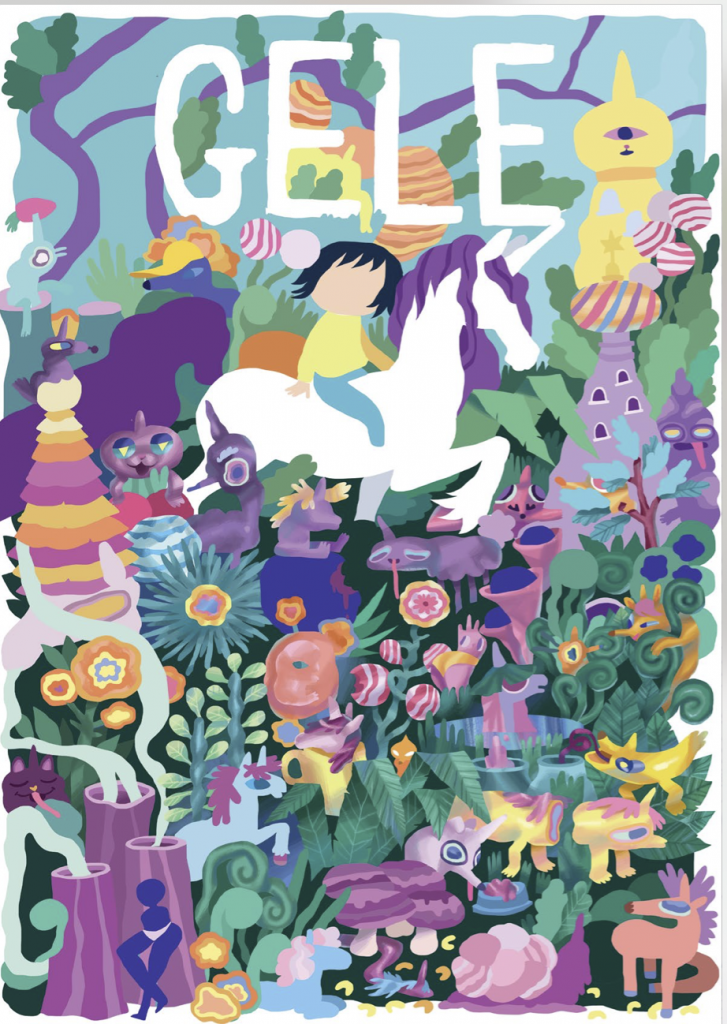 FS: Jelly Vampire’s protagonist Lulu has a vivid imagination that takes her all sorts of places. Do any of your own childhood memories or experiences creep in when creating the series?

IN: It’s mostly my teen/adult memories that creep in I think. I had a very boring childhood, because all I did was sit in my room and draw. It’s when I moved out and to a bigger town and I started going on weird adventures that it started influencing my comics. Many of the Jelly Vampire stories are somehow inspired by these events. For example I have a story where Lulu goes to Sri Lanka and gets a magic tattoo that helps her out of bad situations by changing her appearance. This is inspired by some trips I’ve had to Thailand and Sri Lanka, and got a tattoo and got into trouble. There’s also this story where Lulu is looking for cheese doodles, and discovers a secret Nazi coven, filled with cheese doodles. This is inspired by when I first moved to a new town, and didn’t have any friends. I’d run into all sorts of weird people, like this group of Black Metal Lithuanians who after a while turned out to be a Black Metal-neo Nazi-Lithuanians. It was a bad experience, but I’ve later used these memories to make jokes about the subject. 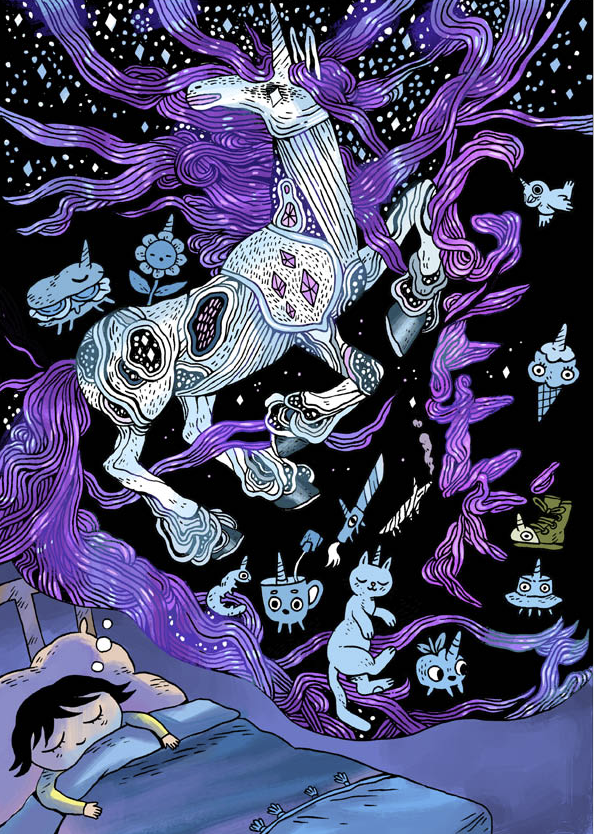 FS: If the Kickstarter reaches its goal, what’s the next step? What can we expect moving forward?

IN: I’m excited to bring Jelly Vampire to new audiences and see what opportunities that will bring. I also have this dream of bringing my characters alive in an animated series. I have some experience in animation and know it’s a lot of work, so I’ll have to assemble some kind of team to do that.

FS: What kind of rewards can backers look forward to if they contribute to the Jelly Vampire project?

IN: We have lots of neat rewards, like different sorts of Jelly Vampire merch. Posters, calendars, and stickers. Also I’ll be offering commissions and animated gif portraits. I’m also offering unicornifiation makeovers where I’ll draw people as their unicorn selves!

Ida Neverdahl’s Kickstarter campaign for Jelly Vampire launches today! Give it a look and consider contributing to this unique, thoughtful project!

And here’s the trailer for the book!

But first, let’s meet Ida Neverdahl. She became an international sensation in 2011 when her vertical (and seemingly endless) comic strip “Like An Artist” went viral after catching the eye of cartoonists including Raina Telegemier and Scott McCloud. McCloud now uses the cartoon in his lectures about understanding the art of comics. As he recently said, “Ida Neverdahl made one of the coolest webcomics of the decade, and I can’t wait to see what she does next.”

Now a regular contributor to Vice Magazine, Ida Neverdahl has been making comics since she was a little girl. JELLY VAMPIRE features the outrageous stories of Lulu Lulusen, an unassuming girl in a yellow jumper whose imagination is as wild as it is colorful. Lulu takes on fresh chaos enthusiastically and without assumption, whether she’s livening up a plate of broccoli with her unicornificator or juggling the pressures of leading a secret society.

The JELLY VAMPIRE Kickstarter Campaign is being run by Emet Comics and its publisher Maytal Gilboa as part of its ongoing mission to bring more stories by women writers and artists to market. “We recognized the lack of diversity still prevalent in the media and joined the movement to change it; not just by telling stories about relatable women, but by giving female writers and artists a platform to express their unique perspectives on history, literature, and the world we live in,” says Gilboa. “Emet Comics publishes and supports lots of serious fiction and JELLY VAMPIRE is not that! Instead, it’s a wonderfully silly romp of a book by a woman whose art makes me belly laugh every time I read it and that’s important too!”

With the help of Emet Comics and supporters of the campaign, JELLY VAMPIRE will be published in English for the first time, with pledges delivered to backers this fall. Backers of the campaign will receive exclusive rewards, that include “Like An Artist” comic strip, two 8X10 prints based on pages from the book, two sheets of stickers featuring many of Ida’s unique characters, pins, and a 2018 calendar featuring twelve months of Ida’s whimsical creations. A limited number of commissions will also be available.

Oh and what’s sprell? Sprell is a Norwegian word which loosely translates to mischief, prank or practical joke. And that sounds just about right for playful stories about fantasy lands, endless imagination and all those unicorns!  For updates, follow Emet Comics on Twitter, Tumblr and Instagram.  Let’s fill the world with sprell and make the world a wonderful and silly place with JELLY VAMPIRE!

Ida is a comic artist and unicorn-wannabe, native to the green pastures of Norway. Growing up, she always liked to draw and make up stories and she figured out how to combine them into the supreme art form of comics early in life. She has published three comic books, and her first book, Moscow, has been published in Norwegian, English, and Polish. She has a bachelor’s degree in Visual Communication from the Norwegian Academy of Art and Design. After her art school days, she enrolled in medical school but dropped out to create comics and work on her submission wrestling skills. Ida is very strong and as a medical student she got to simultaneously hold three human brains, which was very interesting.

You can find out more about Ida and JELLY VAMPIRE on Facebook, Deviant Art and Tumblr.

Emet Comics is the comic book division of Emet Entertainment, a company dedicated to telling stories created by women and featuring strong female protagonists. Emet was founded by publisher and CEO Maytal Gilboa. Visit Emetcomics.com to learn how to join the movement to diversify your bookshelf!

With the word Emet meaning “truth” in Hebrew, Emet Comics seeks to portray a new generation of female protagonists. The advent of social media and crowdfunding has made cultivating a passionate niche audience and catering to that audience convenient and possible, and Emet hopes to  continue to offer unique and entertaining books to it’s growing community.